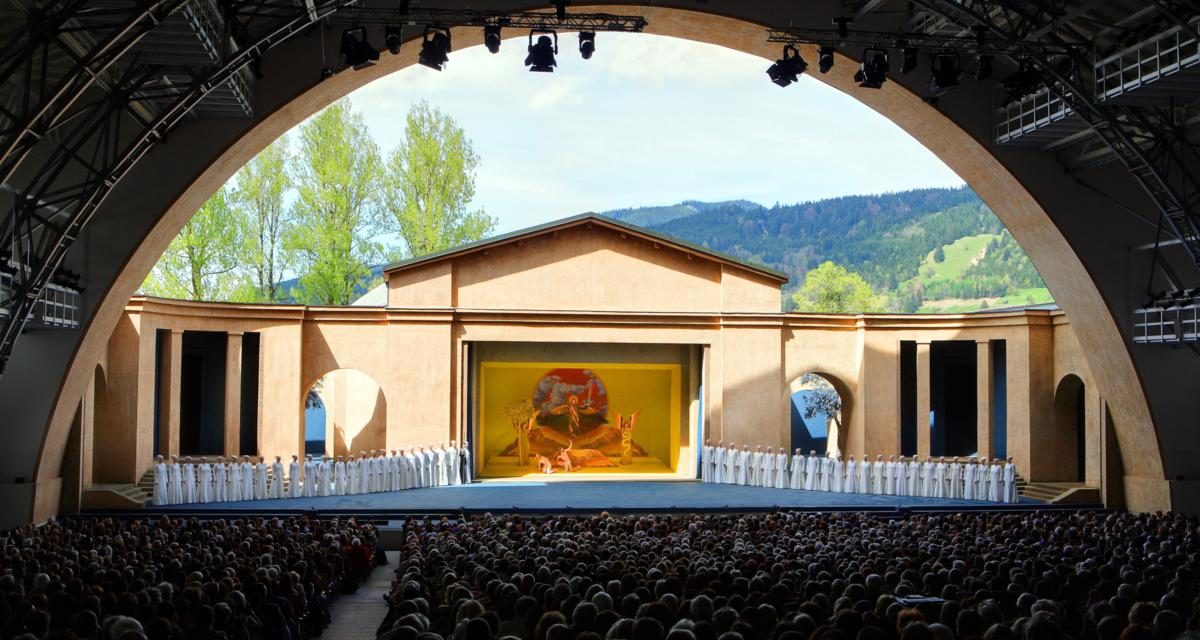 The most famous religious drama in the world, a once-in-a-decade event, will draw the faithful to a picture-perfect Bavarian village that honors a commitment made by townspeople centuries ago.

It’s more than two years away, but excitement is building for what becomes one of the biggest items on the European travel calendar every 10 years—the Passion Play in Oberammergau, Germany. Demand for Passion Play 2022 tickets is high, and some dates are already sold out. The season of 102 performances runs from May 14 to October 2, 2022.

“The Oberammergau Passion Play is a once-in-a lifetime event that needs to be on everyone’s bucket list,” said Manny Paulo, an Oberammergau expert and senior product buyer for tour operator Collette, which in 2010 secured the largest allotment of Passion Play tickets and sold out all its programs that featured the religious spectacle. He recommends that church group leaders, travel agents and other travel organizers “book as early as possible because it will sell out” again. Collette in 2022 is offering more than 50 departures of seven Central Europe tours that include the play and a night or two in Oberammergau.

Tumlare Destination Management, a worldwide company with an office in Waltham, Massachusetts, is the sole officially authorized general sales agent for Passion Play 2022 in North and South America, the Philippines and Japan. It arranges ticket-hotel packages for groups of 15 to 100; anything over 100 for a single group goes directly through the Passion Play office in Germany (which works with large operators like Collette, Globus and Tauck).

“As time ticks off, space is getting harder and harder to get,” said Darin Minghella. Tumlare’s U.S. director of sales. May dates

are selling out the fastest, a reflection of the fact that demand for spring and fall is heavier than summer because many of the playgoers are seniors, a group that tends to travel off-season. Category 1 tickets, the best seats, are still available at different times across each month but are going quickly, so Tumlare is now heavily into Category 2. (There are six categories in the 4,500-seat theater.) Groups do not have a ticket-only option—they must book a hotel with play admission.

The Passion Play is expected to draw 450,000 visitors in 2022, and nearly half the village of 5,000 (including almost 500 children) takes part. In addition to main characters Jesus, Mary, Peter, Judas and Pontius Pilate, there are 120 major and minor speaking roles. Only Oberammergau natives or residents who have lived in the village for at least 20 years can be part of the amateur cast of 2,000-plus, whether as actors, singers or musicians. On Ash Wednesday 2019, participants stop cutting their hair and beards for authenticity. (Wigs aren’t used in the production.) Lead actors prepare for their roles with a September 2019 trip to Israel accompanied by theologians. Rehearsals for the play’s 42nd installment begin in November 2019. While it’s an entirely local production, the level of staging, music and costuming would meet professional standards anywhere.

In the recent past, more than 50 percent of playgoers have been from English-speaking countries, even though the drama is performed in German. To make it easy to follow along, a text in English is provided, and two large monitors display English subtitles along with close-ups of the actors. However, the sheer power and pathos of the story of Christ’s last days on earth—from the entry into Jerusalem to the Last Supper, Crucifixion and Resurrection—transcends any language barrier. “Anyone who has faith finds it an inspiring experience and are moved and amazed by the talent and commitment of the people of Oberammergau,” Paulo said. “The talent is so great—right down to the children.”

The townsfolks’ commitment dates back to 1633, when they vowed that if God would spare them any more deaths from the plague that had ravaged the community, they would perform a passion play every 10 years. Their prayers were answered, and the first play was presented the next year. It shifted to decennial years in 1700 and has been performed according to schedule, with the exceptions of 1870 during the Franco-Prussian War and during World War II, when religious plays were banned by the government. The play was staged in the cemetery over plague victims’ graves until 1820, and in 1830 a stage was erected on the site of today’s theater.

The town of Oberammergau, a star in its own right, “overwhelms visitors with cuteness,” writes guidebook author Rick Steves, who calls it “the Shirley Temple of Bavarian villages.” Tourists snap away at half-timbered houses decorated with biblical scenes, vignettes of Bavarian life, and Grimm fairy tales like Hansel and Gretel and Little Red Riding Hood. You’ll see locals dressed in dirndls, lederhosen and Alpine hats.

While the Passion Play is the chief selling point of the one- to two-week itineraries wrapped around it, Oberammergau is just one stop on an overall tour that visits many other places in Germany and surrounding countries. Globus Family of Brands, for

example, offers 14 Passion Play programs through its Globus, Cosmos and Avalon Waterways divisions. The nine-day “Bavaria Highlights with Oberammergau” (from $2,699 from Munich), a Globus product, visits Regensburg, Nuremburg, Bamberg, Rothenburg and Neuschwanstein Castle, plus Stuttgart, the Black Forest and Lake Constance. “The Best of Switzerland” is a 12-day trip (from $4,099) from Zurich to Munich. Tours in Globus’ Faith Journeys portfolio include the 13-day “Grand Catholic Italy” (from $3,989) and “The European Reformation,” an 11-day Germany trip (from $3,239) that follows in the footsteps of Martin Luther.

Of Collette’s seven Oberammergau programs (10 to 13 days), some departure dates are sold out or only a few seats remain. Paulo said in 2010 that Collette went through its entire allotment of ticket-hotel packages and had to ask for more, a request that was granted by the host committee in Germany. Its tours include one or two overnights in Oberammergau and area. Collette, he said, actively helps group leaders sell their programs. The average group is about 50; minimum group size is 10.

The company, Paulo added, knows Oberammergau well because it runs tours there on a regular basis, year-round. Collette’s entire sales and marketing team last March visited the town, where they toured the theater, were briefed by the director of the Passion Play committee and even met the man who played Jesus in 2010. For Paulo, a Collette veteran of 29 years, this will be his third Passion Play.

Collette’s 12-day “Alpine Explorer” visits Germany, Austria, Switzerland and Italy, while “Germany’s Cultural Cities & Romantic Road” is a 13-day trip that includes Berlin, Hamburg, Marburg, Lubeck, Rothenburg and Munich. Both tours are priced from $4,999. Another program is built around a Danube river cruise.

Two-night packages that tour planners book through Tumlare include play ticket, hotel accommodations in Oberammergau or a nearby town, a breakfast, two dinners, shuttle bus to and from the play, program book and local tourism tax. One-night packages
also are available. In addition, Tumlare can arrange tours in Germany and other countries before and after the big event.

For Oberammergau inquiries, call 978-579-0020 or use the dedicated email address passionplay@tumlare.com. The website is www.tumlare.com.

Promising to be a highlight on the 2022 travel calendar, this big-time passion play in little Oberammergau will have no trouble filling seats. Groups wishing to witness the momentous event should start making their plans for Europe as soon as possible. Or risk settling for 2030.