The Maya: Discover the Magic of Ancient Religion in Latin America 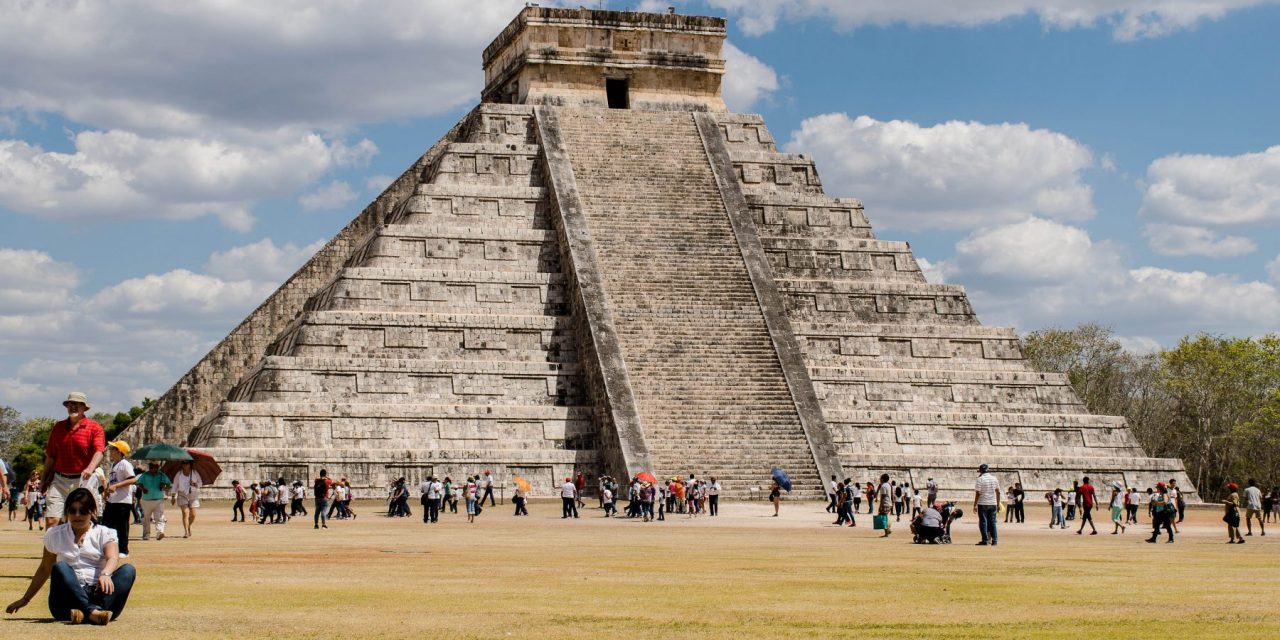 Religion is a compelling form of self-expression due to its unique ability to unite entire nations and civilizations, and the religion of the Mayan people was no exception. Travelers looking to deepen their own faith may find inspiration in learning about early Mayan teachings and exploring impressive worship sites. Incite imaginations and expand spiritual knowledge by leading your group to these 10 religious landmarks throughout Mayan Latin America – no human sacrifice required.

Chichén Itzá is one of the most popular Mayan sites and for good reason. Not only was it the primary ceremonial site, but it is regarded as the former urban center of the Mayan empire and displays many of the most fascinating aspects of Mayan culture.

Travelers will recognize the famous El Castillo pyramid that has become representative of the Mayan Empire. With its 365 steps to represent each day of the year, it demonstrates the Maya’s advanced calendar and sense of time – plus it makes for a great photo-op. The Mayan were so skilled in astronomy that they could predict solar eclipses and even engineered El Castillo so that the shadow of a serpent falls on the pyramid on the spring and autumn equinoxes.

Uxmal is not only a site teeming with tangible evidence of the existence of the Maya, but it is a place where Mayan legends seem to come alive. Due to the architecture of the city, there weren’t (and still aren’t) any sources of fresh water. As a result, Chac (the Mayan god of rain) was of great importance in the lives of those who lived here, and he is honored frequently in Uxmal temples.

One of the first pyramids that travelers will come across in Uxmal is the Pyramid of the Magician, which stands 38 feet tall and is said to have been built by a dwarf magician who was summoned to build a pyramid in one day after challenging the king. When he succeeded, the magician overthrew the king. Although it isn’t as popular as some of the other Mayan sites on the Yucatán peninsula, travelers will find a sense of wonder at Uxmal as well as comfortable and convenient hotels and the opportunity to see a sound and light show over the city at night.

To understand the religious beliefs of the Maya, it is essential to not only explore their places of worship, but to also understand how they dealt with death and the afterlife. In Palenque, tourists can stand in front of the Temple of Inscriptions, a pyramid that was later discovered to be a tomb.

In 1952, an archaeologist came across a hidden staircase that led to the adorned crypt of a Palenque ruler, King Pakal. The king was found wearing a green jade mosaic death mask and a copious amount of jewelry. Tour groups can stop by the National Museum of Anthropology in Mexico City to see real artifacts from the tomb, including King Pakal’s embellished sarcophagus. While in Palenque, tour groups can also pay tribute to the three main temples, including the Temple of the Sun, which honored the god of the sun and was associated with war.

Tikal, an ancient metropolis nestled in the dense Guatemalan rainforest, displays the astounding brilliance of the Mayan people and their rich artistic and spiritual culture. The national park spreads over 222 square miles and boasts six temples dating back to 250 BCE. Each temple looms over the ruins of Tikal like a wary gatekeeper, standing on sturdy architecture that survived when its own civilization did not.

Travelers will climb the steep steps to the tops of weathered pyramids and look out over the fragmented city, recreating the once bustling city in their minds and looking up to the sky for comfort as Mayan kings once did.

La Danta, one of the world’s largest pyramids at 236 feet tall, is almost swallowed by the lush vegetation that has unfurled over the ruins of El Mirador, the former Mayan capital city. Although the city was abandoned almost 2,000 years ago, travelers will be able to sense the lingering presence of the hundreds of thousands of Mayan people who once called El Mirador home.

To reach La Danta and the heart of El Mirador, travelers will embark on a five-day hike through the Guatemalan jungle beginning in Carmelita. Experts recommend a pair of hefty hiking boots, long pants, plenty of insect repellent and a genuine interest in the hidden majesty of the “Lost City.”

Originally built in 1200 BCE as a royal enclave for the elite Mayan ruling family, Cahal Pech has become one of the most visited Mayan sites due to its 34 well-preserved structures and comfortable accommodations for tourists.

Groups can tour Cahal Pech’s ancient temples, altars, ball courts and tomb sites and experience the luxurious lives of the Mayan ruling families while enjoying the comforts of the many upscale resorts in the area.

Lamanai, named after the Mayan word for “submerged crocodile,” is a scenic Mayan city that was inhabited for nearly 3,000 years beginning in 500 BCE. It sits on the banks of the New River Lagoon and features three large pyramids including the High Temple, which towers over the city at 108 feet high.

Travelers will rave about the picturesque 26-mile boat ride to Lamanai along the New River and appreciate the breathtaking views from the tops of the pyramids. Visitors can also explore the ruins of several Roman Catholic churches constructed by Spanish missionaries in 1570.

For travelers who want to gain a perspective into the daily lives of average Mayan citizens, visiting the newly discovered ruins of Joya de Cerén is a must. Cerén, a small Mayan farming community, was inhabited as early as 1200 BCE but was eventually buried due to the explosion of a volcano named Loma Caldera.

The site was discovered in 1976 and has since been a popular tourist destination because of the insight it provides into the lives of Mayan farmers through well-preserved artifacts and structures. Due to the sudden evacuation of the city, Cerén offers an eerie view into a typical day of a Mayan village. Because the temperature of the volcanic ash lends itself to preservation, the belongings left behind by the frenzied Mayan citizens such as utensils and furniture are in superb condition. Travelers can see for themselves what typical Mayan living quarters looked like and perhaps leave with a new outlook on their own lifestyles.

In the Mayan K’iche’ Language, Tazumal is translated as “the place where souls are consumed” – but don’t let that deter your tour group from wandering through the well-excavated remains of Tazumal, a grand Mayan trading center that was constructed around 100 AD.

Be sure to check out the complex water drainage system, tombs and ritual objects that have been discovered in the area. The Dr. Stanley H. Boggs Museum displays the findings of renowned archaeologist Stanley Boggs, including primitive incense burners, pottery and stone belts worn by Mayan ball players.

Unfortunately, tourists aren’t allowed to climb to the top of the main pyramid at Tazumal due to damage caused by a 2001 earthquake, but it’s still quite a sight from the ground.

The ruins of Copán are as intriguing as they are spectacular – travelers will find themselves wondering why exactly the Mayans did leave this expansive city in the 8th century and why so suddenly. The mystery of the decline of Copán adds to its allure, but the plethora of stone temples, immense plazas and an extensive collection of hieroglyphs and stelae will make it difficult to leave.

The site, with more than 4,500 structures over 9 square miles comprises two areas: the Copán site built for the Mayan nobility and Las Sepulturas, the site built for upper-class residents. One of the most remarkable architectural and historical features of Copán is the Hieroglyph Staircase, which comprises 63 stone steps on the side of Temple 26, each engraved with Mayan texts recounting Copán’s history.

This is only a small sample of the incredible Mayan ruins throughout Mexico and Central America. As well, be sure to integrate these sights into landmarks of other faiths throughout the region.