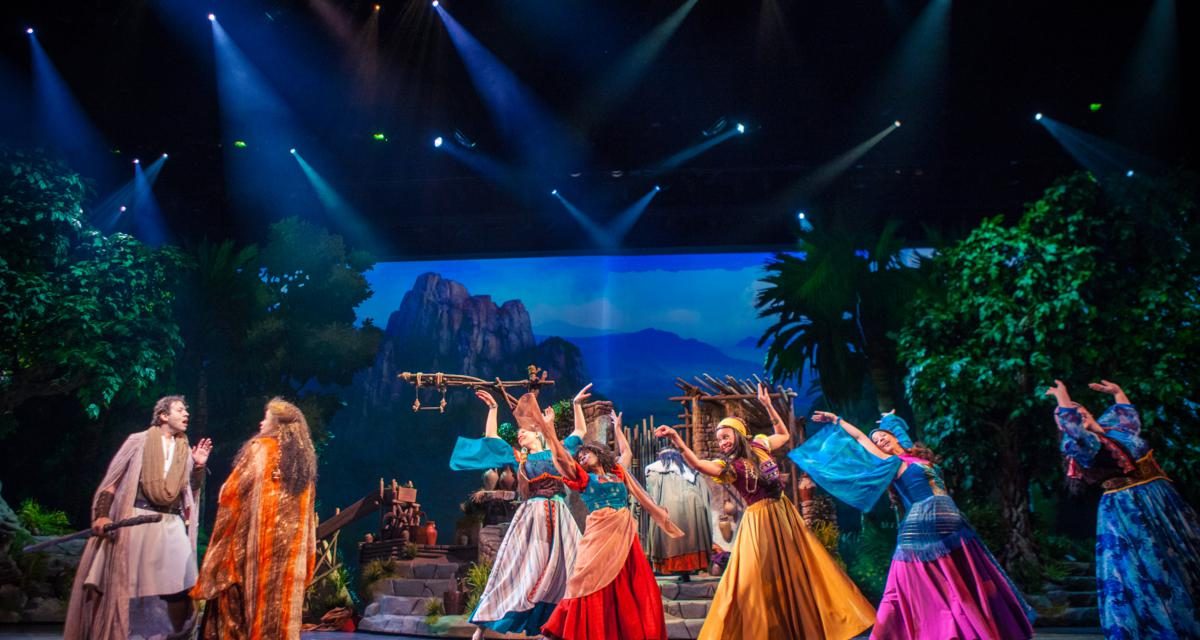 Top-of-the-line religious theaters all over the country are taking ministry to the next level. Combining musical numbers, original scripts and, in some cases, live animals, they bring the Bible to life.

NarroWay Productions, a premier dinner theater that promotes wholesome Christian entertainment, has been called the “Broadway of Christian Entertainment.” In 2018 NarroWay is offering six major productions, including Samson the Last Judge, The Gospel According to Tennessee, Not Another Love Story, Lord of Light, The 4th Cross and The Real Christmas Story. Each production brings a biblical story to life. NarroWay also produces mystery theaters throughout the year where guests become a part of the show and try to guess “whodunit.” (narroway.net)

Taking the stage in Branson for the 2018 season is the story of Samson. Sight & Sound Branson’s Samson explores how an underachiever goes on to be remembered as one of God’s most faithful followers. Debuting in Lancaster in 2018 is Jesus, a production that examines the life of Jesus Christ and how he impacted the lives of millions during his lifetime and beyond. Sight & Sound’s panoramic stages immerse the audience in the story through beautiful sets, live animals and state-of-the-art special effects. (sight-sound.com)

The Great Passion Play showcases the last days of Jesus’ life on a 550-foot-wide, multi-level stage. The play runs from May to October every year. At the site of the play, guests have access to an all-you-can-eat meal at the Great Hall Buffet, an interactive Holy Land tour, the Sacred Arts Museum, the world-renowned Bible Museum, the History Museum, Noah’s Ark Park Petting Zoo and hiking trails before the show. The play, set in an outdoor arena, utilizes live animals throughout the production to further the historical accuracy. (greatpassionplay.org)

The Hill Cumorah Pageant is one of the largest outdoor productions in the world. The pageant is held every year in July on beautiful Cumorah Hill on a spectacular 10-level stage with 12-tower lighting, a state-of-the-art sound system and Hollywoodstyle special effects. The production is performed by over 650 cast members. The outdoor arena can seat up to 8,000 people, and parking and admission are free. The 2018 pageant will be held July 13, 14 and 17-21. The pageant features scenes on topics from the Bible and the Book of Mormon, including scenes of the prophet Lehi, the visions of Christ and the resurrected Christ. (hillcumorah.org/hill-cumorah-pageant)

Rocky Hock Playhouse is a full-time Christian dinner theater owned and operated by husband and wife duo Jeff and Gloria Emmerich. The Emmerichs are dedicated to sharing the biblical message through musical theater, and they complete this goal by writing and producing five original musicals each year. The 2018 season will kick off with an Easter show titled Our Risen Savior that was written by Gloria. Rocky Hock Playhouse will produce a performance of The Hobbit at The Albemarle Performing Arts Center in April. (rockyhockplayhouse.com/)

The Fireside Dinner Theatre, a Wisconsin landmark that opened in 1964, is famous for treating everyone like family and providing top-of-the-line food and entertainment. During the 2018 season, The Fireside is combining old classics with new, including Kopit & Yeston’s Phantom, Grease, Disney’s The Little Mermaid, 42nd Street, Disney’s Newsies and Elf the Musical. The theater also hosts a Christian concert series. In 2018 the series features the Browns, Collingsworth Family, Booth Brothers and Triumphant Quartet. (firesidetheatre.com)

Dolly Parton’s Smoky Mountain Adventures in Tennessee opened in May of 2017 and has been wowing audiences with the story of her parents, Avie Lee Owens and Lee Parton. The Owens and Parton families go to battle for the Pigeon Forge mill in the show, and audiences get to see how the country superstar’s mother and father met and fell in love. Smoky Mountain Adventures also hosts a special Christmas spectacular that features everything from a live Nativity to a mischievous elf, high-flying acrobatics, figure skating and a Bluegrass Nutcracker. Dinner is offered with each show. Guests enjoy a hearty Southern meal of soup, homemade biscuits, ham, fried chicken and dessert. (smokymountainadventures.com)

Going to the theater can be a rewarding experience, and even more so when the theater you are visiting is based on Christian principles. From big stage productions to youth theater, there is an inspirational experience for everyone. Combining musical numbers, biblical themes and magnificent sets, religious theaters are redefining the theater experience.