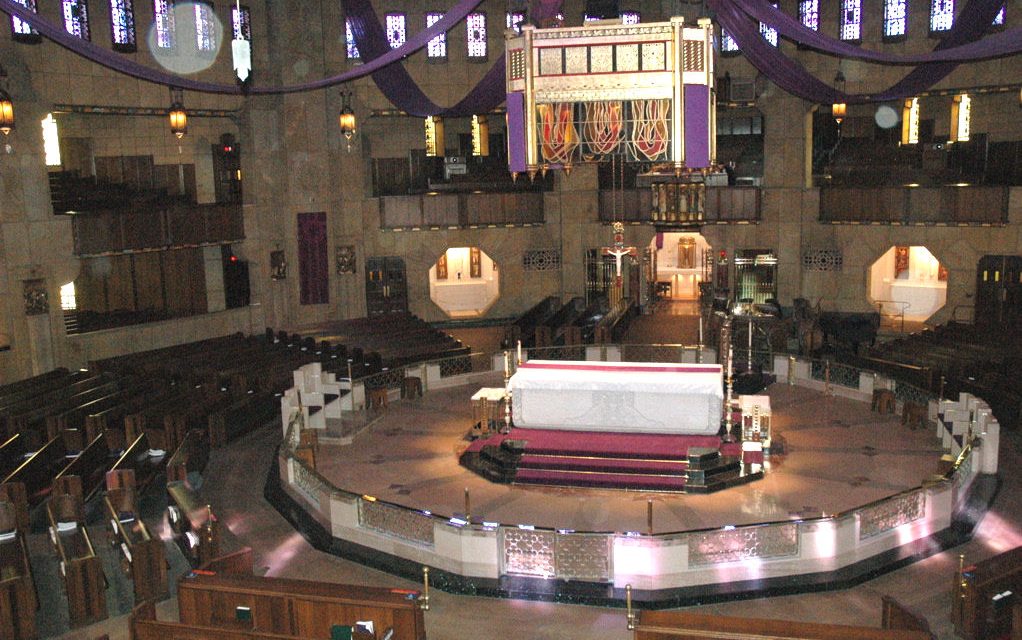 Catholic shrines in the New England states serve different purposes for everyone, whether a religious pilgrimage, gift shop visit, or a tour of Christmas lights. Each shrine has its own unique, historical beauty to share.

Listed below are some of the top Catholic shrines in New England:

National Shrine of Our Lady of La Salette, Attleboro

Opened to the public on Dec. 8, 1953 in honor of Mary’s apparition in La Salette, France on Sept. 19, 1846, this holy shrine attracts visitors with its statuary gardens, a church and a retreat home. Many people come for the Christmas Festival of Lights, when more than 250,000 lights brighten the grounds. Displays, concerts and other events occur during this time. Others come for the daily Mass, daily reconciliation, ethnic pilgrimages and the prayerful environment of the grounds themselves.

The front view of the statue of Madonna, Queen of the Universe was inspired by the same statue in the Don Orione Center on Monte Mario, in Rome, Italy. The landmarks were both built by Jewish-Italian sculptor Arrigo Minerbi as a sign of his gratitude to the Catholic Church for having protected him and his family from the Nazis during World War II. This breathtaking shrine overlooks Logan International Airport.

The National Shrine of the Divine Mercy of the Marian Fathers of the Immaculate Conception of the Blessed Mary sits on Eden Hill. In 1943, Fr. Joseph Luniewski, superior of the Marian House in Washington, D.C. sent a young preacher, Fr. Walter Pelczynski, to find a home suited for those readying themselves for a religious life. With the help of the pastor of St. Stanislaus Kostka Church in Adams, and with the assistance of family members and friends, the Marians purchased the land at Eden Hill.

Our Lady of Fatima Shrine, Holliston

Our Lady of Fatima Shrine was built by the Xaverian Missionaries in 1950. It has become a well known place of prayer, meditation and devotion to Our Lady. The center of the shrine includes the apparitions of Our Lady that occurred in Fatima, Portugal in 1917. This shrine holds what is said to be the largest rosary in the world.

This shrine, covering 35 acres of hills and gardens, is situated within the Diocese of Worcester and staffed by the Augustinians of the Assumption. Small sections of the site are available for “adoption” in memory of a loved one.

The church of St. Joseph was instituted in 1868 by Fr. Andr’e Marie Garin to serve immigrants working in Lowell’s mills. Over time it evolved into a “workers’ shrine.” Richard Cardinal Cushing then rededicated the shrine to St. Joseph, patron of workers, on the Feast of the Ascension, May 10, 1956. The church has a museum and gift shop.

Shrine of the Little Flower, Nasonville

St. Theresa’s motto is “love is repaid by love alone.” Marie Francoise Therese Martin was born on Jan. 2, 1863 at Alencon in Normandy, France. She lived a normal childhood and entered the convent, Carmel of Lisieux, when she was 15 years old. Theresa was a nun who lived faithfully and loyally in trust of the Heavenly Father. This shrine was the first in the United States built in honor of Theresa. After the church, rectory and school were built, an outdoor altar, Stations of the Cross and a beautiful living rosary with a statue of Our Lady of Peace on top of a fountain were added. This shrine holds many events throughout the year, including the Saint Theresa Feast Day, which is held on the third Sunday of August.

A stunning feature of the shrine is the Way of the Cross, which rises above the Crucifixion scene. There are also monuments of The Sacred Heart, St. Michael, St. Jude, St. Joseph and St. Louis de Monfort. Dedicated to Our Lady of the Lords, the Litchfield Shrine was built during the 1955 Marian year by the missionaries of the Company of Mary. The main shrine is the Cavern of Our Lady, built from local fieldstone and modeled after the cavern in Lourdes, France.

St. Anne, the mother of the Virgin Mary, was regarded with nearly as much respect by Catholics as her daughter. Prayers to St. Anne have been followed with many miracles, especially at the Cathedral in Sainte Anne-de Beaupre, Quebec, located northeast of Quebec City. Both the Cathedral and the shrine in Vermont display a small collection of crutches and other mobility aids left behind upon the healing after praying to St. Anne. The shrine is located on Isle La Motte in Lake Champlain at the original site of Fort St. Anne, which is known as the oldest settlement in Vermont. The shrine is open from May through October and offers daily Mass.

Shrine of Our Lady of La Salette, Enfield

Founded in 1951, the Shrine of Our Lady of La Salette is a holy place of prayer, and meditation in an environment of peace and beauty. The shrine is a replica of the apparition site at La Salette in France, complete with a rosary pond, outdoor Stations of the Cross, and a cavalry scene with holy stairs and a peace walk.