From birdwatching in the Midwest to speeding around a Las Vegas racetrack, the August issue of Leisure Group Travel abounds with ideas for adventure-seeking groups.

In “High-flying Midwestern Birdwatching Meccas,” staff writer Miles Dobis suggests a few group-friendly sanctuaries and nature centers teeming with winged creatures. Wisconsin, for example, is home to the International Crane Foundation, which boasts the largest variety of cranes in the world, and Horicon Marsh, the largest freshwater cattail marsh in the country. Nebraska hosts the sandhill cranes every February and March, while the National Eagle Center in Wabasha, Minnesota, offers guided outings along the Mississippi River from October through March. Groups looking for camping action in the Midwest will be drawn to the Take Five interview with Aaron Wolf of Adventures Accessed.

Our Western coverage also spotlights California. For a different take on outdoor offerings, see what’s special about two of the Golden State’s often-overlooked national parks – Joshua Tree and Channel Islands. For night-time options in planning a group trip, check out “California Fun Doesn’t End After Sundown,” which provides a plethora of possibilities, from stargazing and whale watching to bowling, mini golf and late-night eateries.

Rounding out regional coverage is our East Coast report on casino developments in New England and the Mid-Atlantic. “Casino Buzz” covers everything from the three new gaming establishments in Massachusetts to the latest in Atlantic City. 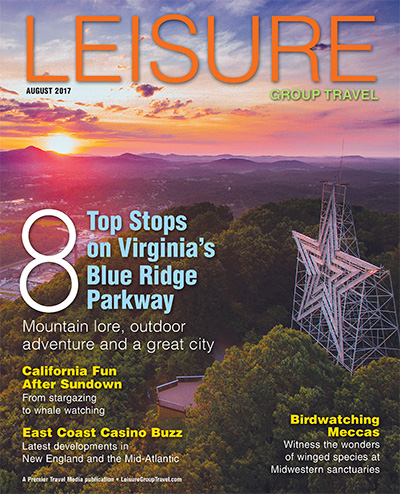