Whether your groups prefer spectator sports, symphonic music or dinner theater fare, Jacksonville, Florida entices visitors with a plethora of entertainment options in a multitude of venues. 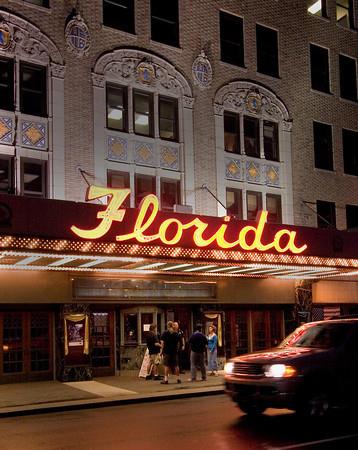 What’s not to like about Jacksonville? Florida’s largest city has everything from entertainment and history to sports and, yes, beaches. Groups of all sizes and interests are discovering that Jacksonville really does have it all.

Beginning in 1956, Elvis Presley performed in Jacksonville eight times. At one of The King’s early appearances, a local judge sat through the performance. He believed it necessary to monitor Presley’s body movements and assure they were not too suggestive. I’m wondering how that worked out.

Fast forward to the present and you’ll quickly see that Jacksonville Landing on the St. Johns River in downtown Jacksonville is a hub of continuous entertainment. Whether it’s live music in a lounge setting or full-blown concerts, Jacksonville Landing has a jam-packed events calendar. Its group program provides a Preferred Customer Discount Booklet and Food Court Vouchers with savings on shopping and dining. A visit to jacksonvillelanding.com provides all the details.

An extremely popular venue is the historic Florida Theatre. Built in 1927, it is listed on the National Register of Historic Places. With a rich history of vaudeville and early concerts, it continues to host leading musical, dance and spoken-word concerts. Take a look at the schedule on floridatheatre.com.

The Alhambra Theatre & Dining, built in 1967, is a nationally known symbol of entertainment in the Jacksonville area. One of the few dinner theaters that remain, the Alhambra has featured a host of legendary performers and draws talent from across the country. (alhambrajax.com)

The Times-Union Center for the Performing Arts is home to the Jacksonville Symphony Orchestra. Its concert series produces the classics, opera, gospel, big band and ballet. The venue’s popular THE ARTIST SERIES brings traveling Broadway shows, comedy and concerts to Jacksonville.

Through JaxEvents.com it’s easy to see who’s playing, explore group options and reserve your space at the Times-Union Center. But details also are available for the following six venues:

The new Ritz Theatre and Museum was constructed on the same site as the 1920s Ritz Movie House. The latter was located in the African-American community of La Villa. With both an educational and entertainment mission, the Ritz preserves the cultural and historical heritage of the community. Regularly scheduled entertainment and rotating exhibits are part of that mission.

Jacksonville Veterans Memorial Arena, a multi-purpose arena, is the site of major concert events and festivals throughout the year. Without a bad seat for up to 15,000 attendees, the venue has hosted everything from NCAA men’s basketball to Elton John to the Craft and Import Beer Festival.

Prime F. Osborne III Convention Center is a popular destination for meeting and convention planners. However, youth performance groups are also taking notice as it regularly hosts the Diamond Cheer & Dance Competition. Regardless of your group’s interest, check out what’s happening at the center. You just might find an expo or event that fits your itinerary.

Home to the NFL Jacksonville Jaguars, Everbank Field has hosted more than professional football games in the powerful AFC South. Everbank Field also hosts the annual Florida-Georgia football game. It may be better known as “the world’s largest outdoor cocktail party.” If you’re reading this in mid-June, there’s a good chance that Colt Ford, Big & Rich or Miranda Lambert will be performing with numerous other headline talents at the Florida Country Music Superfest. It’s planned to be an annual country music showcase event.

If you’re keeping score, five of the seven venues associated with JaxEvents.com have been mentioned. In addition to Everbank Field, these last two are all about sports. The Baseball Grounds of Jacksonville is home to the Jacksonville Suns, the Class Double-A Southern League affiliate of the Miami Marlins. The Suns offer a variety of group plans, including food options.

Last but not least of the entertainment venues available through JaxEvents.com is the Jacksonville Equestrian Center, which hosts top horse competitions.

In the world of sports entertainment, Jacksonville is a major golf destination for both the PGA Tour and visiting golf groups. The area’s golf is certainly well known for the PGA Tour’s The Players Championship in May. Held at TPC Sawgrass in nearby Ponte Verde, it’s a fan favorite and often referred to as the “Fifth Major.” Tickets and packages for The Players in 2015 will be online at visitjacksonville.com.

Those five days in May are always an exciting time in Jacksonville. However, for thousands of visiting golfers, it’s the more than 1,200 holes of golf and one significant attraction–the World Golf Hall of Fame & Museum. Located at World Golf Village in nearby St. Augustine, it shares the history of golf and the individuals who played a significant part in the sport’s growth and popularity. For the visiting golfer, there’s a monthly Hall of Fame Challenge, a closest to the pin contest, a golf simulator and putting course.

Special Hall exhibits include “Bob Hope: Shanks for the Memory” and “Nancy Lopez: Pride, Passion & Personality,” a recent addition. The newest permanent exhibit is “Honoring the Legacy: A Tribute to African-Americans in Golf.” From difficult beginnings to the challenges of today, the exhibit chronicles struggles and triumphs of notable golfers, among them Charlie Sifford, Althea Gibson, Joe Louis and Tiger Woods.

Jacksonville is a delightful combination of older Florida and newer Florida, a blend of history and hip. It all mixes with a dining scene that goes from international elegance to classic Southern and plenty of flavor stops in between.