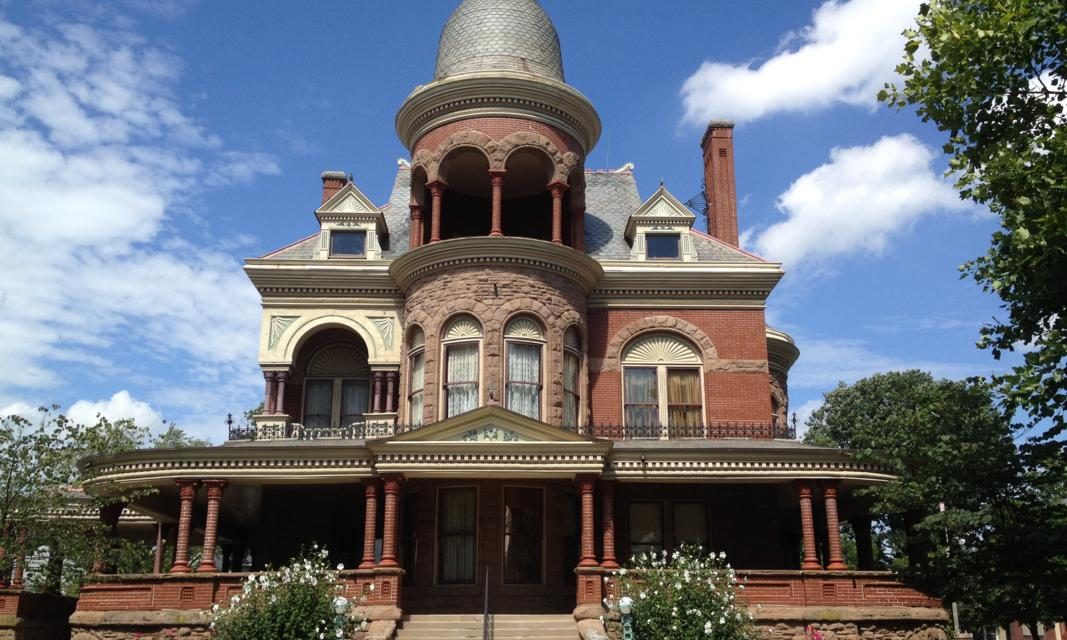 From Elkhart to Evansville, historic mansions in Indiana paint a picture of how the other half lived

During the boom days of the 19th century, America’s economy grew by leaps and bounds, and barons of industry massed unfathomable amounts of wealth. They poured their riches into showplace homes, furnishing these opulent nests with the best that money could buy.

Staffed by servants, the “palaces” boasted grand staircases, exquisitely carved woodwork, valuable art and sumptuously appointed parlors. Many of the finest specimens of over-the- top residential architecture were built during the Gilded Age, the years between the Civil War and early 20th century, a period generally known as the Victorian era.

Indiana’s historic house museums provide peeks into the lives of the rich and famous. They not only offer private tours featuring docents with stories to tell and antiques to show off, but some can arrange group teas and luncheons amidst the elegant trappings. Most mansions get all decked out for the Christmas season, one of the prime times to visit. 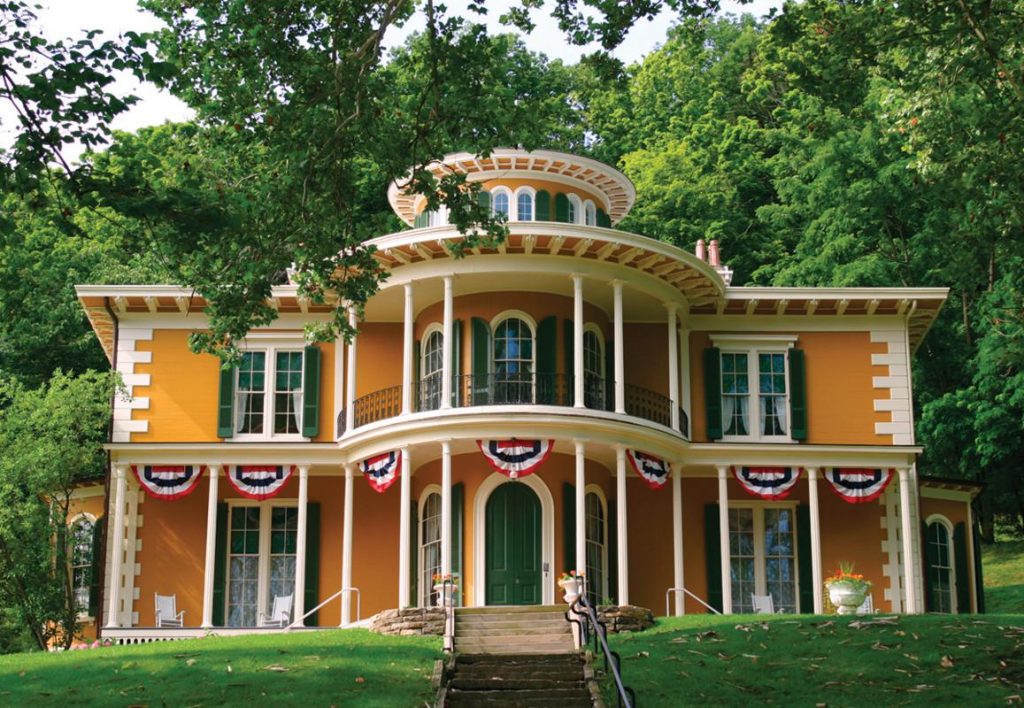 Several of Indiana’s stately homes of yesteryear can be found in towns along the Ohio River, whose shores were thriving with industry and shipping activity in the 1800s. Thomas Gaff, the son of Scottish immigrants, came from Pennsylvania in 1855 and made his fortune in distilling, brewing, steamboats and other businesses launched with his brother. Hillforest Victorian House Museum, built into a wooded hillside over the history-rich town of Aurora, reflects the Gaffs’ genteel lifestyle. Motorcoaches cannot negotiate the steep drive, so the Dearborn County Convention, Visitor and Tourism Bureau provides van transportation for those who cannot walk up to the flamboyantly designed Italianate house. Its steamboat-inspired architecture features curved central colonnades, a magnificent suspended staircase and a circular belvedere set in a pilot house-style cupola offering panoramic river vistas (accessible to visitors via a steep set of stairs).

Before or after touring Hillforest with a costumed guide, groups can gather amid the Victorian finery in the double parlors for a “Linens & Luxury” luncheon or a three-course afternoon tea with finger sandwiches, scones and sweets. Another option is the “Twilight Tour Progressive Mansions Dinner” with a catered dinner at Hillforest followed by a dessert buffet in the formal dining room at Veraestau Historic Site, a bluff-top estate dating back to 1810 with sweeping views of the river valley. 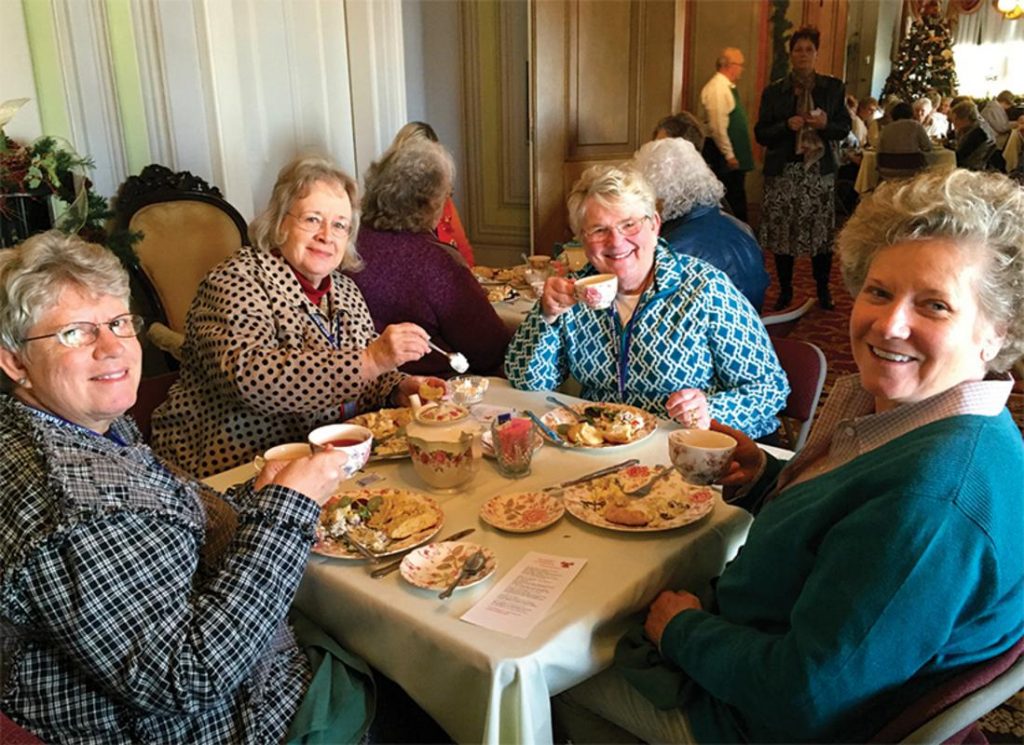 Madison, another Ohio River town that enthralls admirers of lovely old buildings, boasts the largest contiguous National Historic Landmark District in the nation. A living museum that prizes historic preservation, it was once the largest and wealthiest town in Indiana, made prosperous by industries like pork packing. Madison’s crown jewel is Lanier Mansion State Historic Site, one of the best examples of Greek Revival architecture in the Midwest.

Its immense Corinthian columns support a two-story porch that overlooks gardens and the riverfront. The mansion was built in 1844 by financier and railroad magnet James Lanier, who in 1849 moved to New York and made a name for himself in financial circles but maintained his Hoosier State ties, lending the state more than $1 million during the Civil War. A desk and bookcases are among the few furnishings original to the house, but all pieces are authentic to the period. The oldest artifact is the 1790 harp from France. Also of note is the spiral staircase leading to the skylit cupola. 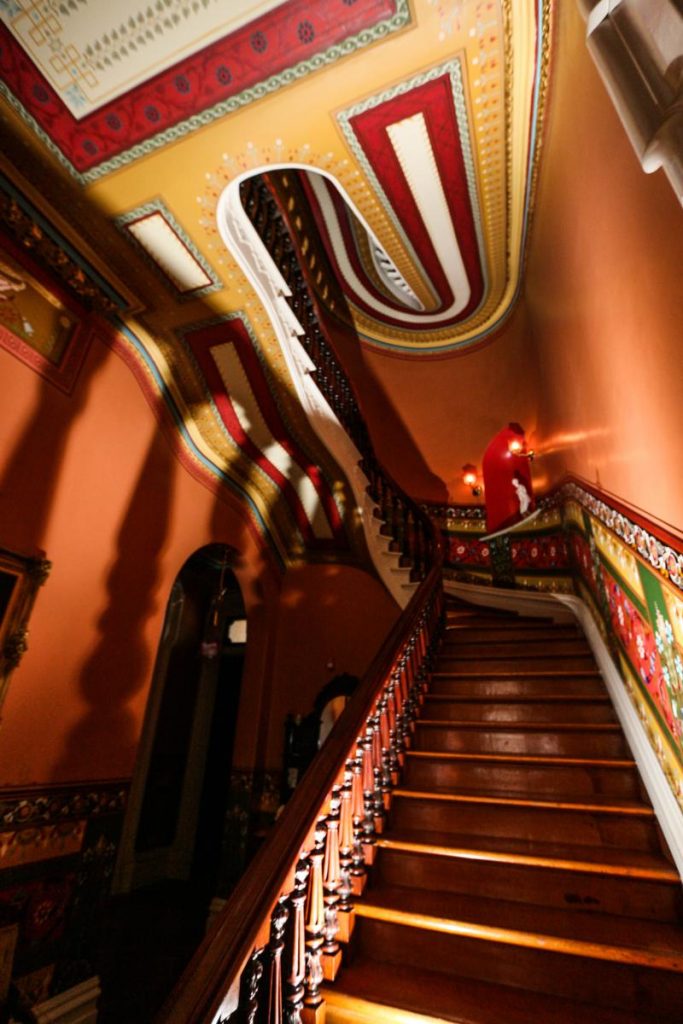 Culbertson Mansion, another designated State Historic Site, is a Gilded Age gem in the Mansion Row Historic District of New Albany. The French Second Empire home, an imposing vision in deep yellow, was built for $120,000 from 1867-1869 by William Culbertson, who at the time of his death in 1892, was considered the wealthiest man in Indiana. A masterpiece of Victorian artistry, the three-story mansion dazzles visitors with its intricate stenciling, hand-painted ceilings, marble fireplaces, elaborate plasterwork and carved staircase of mahogany and rosewood—all beautifully restored. Upstairs ceilings soar to 17 feet,
while those on the main level rise 14½.

The Reitz House Museum, another home in the Second Empire style, draws history, architecture and decorative arts buffs to the Riverside Historic District of downtown Evansville. The Victorian showplace was built in 1871 by John Augustus Reitz, a Prussian immigrant known as the “Lumber Baron.” By the 1880s his sawmill was producing more hardwood lumber than any other in the country. Guests are impressed with the grand entry hall in Moorish design, 14-foot ceilings, chandeliers, stained glass, plasterwork, parquet floors and walnut wainscoting.

The drawing room, graced with a harp and piano, gives off a frilly French feel; a white onyx fireplace is from the 1893 Columbian Exposition in Chicago. Many furnishings are original. After the last Reitz family member died there in 1931, the home was left to a
Roman Catholic women’s organization and later became the residence of the bishop of the Evansville Diocese.

Indiana lays claims to two homes once occupied by U.S. presidents—William Henry Harrison and his grandson, Benjamin Harrison. Grouseland, the residence of the first President Harrison, is a major tourist attraction in Vincennes, the state’s oldest city. Built from 1802-1804 on a knoll above the Wabash River, the Federalstyle mansion was rather sophisticated for the frontier and borrowed elements from plantation homes in Virginia, the home state of the well-to-do Harrisons. At age 27, William Henry was appointed governor of the Indiana Territory, a wilderness that stretched across what is today Indiana, Illinois, Michigan, Wisconsin and parts of Minnesota. It also served as a seat of government, social center and place of refuge for the community in times of hostility.

In 1811 Harrison became a military hero, earning the nickname “Old Tippecanoe” after defeating Shawnee Indians in the Battle of Tippecanoe, which took place near Lafayette. On a tour of Grouseland, visitors see memorabilia from the 1840 “Tippecanoe and Tyler Too” presidential campaign and items that memorialized Harrison after his untimely death, just one month after taking office as the nation’s ninth president. Most of the antiques date prior to 1812, even to the late 1700s, and include some Harrison family pieces. In the dining room, the Harrisons hosted Indian chiefs and luminaries like explorers Meriwether Lewis and William Clark. The mansion’s name comes from Harrison’s enjoyment of shooting and eating grouse. 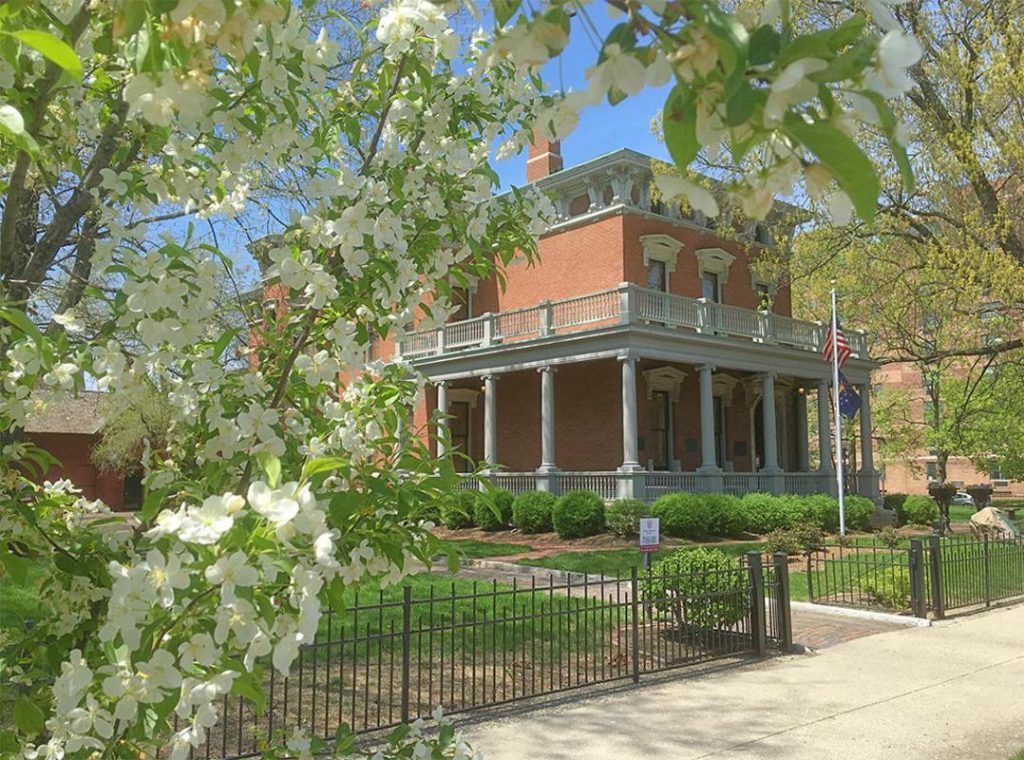 In the Old Northside neighborhood of Indianapolis, the Benjamin Harrison Presidential Site preserves the 16-room Italianate Victorian residence of the 23rd president, the only one elected from Indiana. He occupied the red-brick home, built in 1874-1875, until his death in 1901, except for his U.S. Senate and presidential years. The study is filled with personal items from the White House and displays his Oval Office desk, while the dining room has presidential china. There is a collection of gowns belonging to Mrs. Harrison and her daughter.

Another example of Italianate Victorian architecture in Indianapolis is the James Whitcomb Riley Museum Home. The “Hoosier Poet” lived there (with other families) the last 23 years of his life, from 1893-1916, but he never owned it. Visitors can see ceilings painted by Italian artisans, the desk where Riley penned poems such as Little Orphant Annie and personal possessions like his top hat and cane. A visitor center has documentary videos and displays on Riley and Victorian America. The home is located in the Historic Lockerbie Square neighborhood, just a short walk from the galleries, restaurants and retail shops that make up the Mass Ave Cultural District.

South Bend has two stone-walled, fortress-like mansions influenced by the Richardsonian Romanesque style popular in the late 19th century. The four-story abode of the Studebakers, who founded an automobile dynasty, is now a fine dining restaurant called Tippecanoe Place. Providing a window into the Gilded Age, the mansion is open for self-guided exploration during normal business hours, and guided tours are offered as well. Guests marvel at its ornately carved woodwork and 20 fireplaces. Said a local newspaper report soon after the 40-room home was built in 1889: “The house, in its proportions and appointments, probably surpasses anything in Indiana. It is an embodiment of all that wealth and taste can suggest, and
modern skill and invention devise.” Nearby is the Studebaker National Museum, which shares a campus with The History Museum, a repository of artifacts from the St. Joseph River Valley region.

The Oliver Mansion, with 38 rooms and 14 fireplaces, is part of the latter. Besides getting a look at the leaded-glass windows, parquet floors and original furnishings inside, visitors can stroll the 2.5-acre grounds, which feature gardens, a teahouse, fountain and carriage house. The 1897 home belonged to James Oliver, who invented an economical and efficient plow manufactured in town.

Fronting the St. Joseph River in Elkhart, Ruthmere was the 1908 Beaux Arts-style home of Albert R. Beardsley, general manager of a company that later became Miles Laboratories, makers of such over-the-counter products as Alka-Seltzer and One-A-Day Vitamins. Impressive features of the brick and limestone mansion include ceiling and wall murals, Cuban mahogany paneling, silk wall coverings, Italian marble fireplaces and gilded woodwork, plus a game room decorated in leather and red velvet. One novelty: music from a combination player piano/organ in the front parlor that is piped into the library. Ruthmere, named after a daughter who died in infancy, also maintains a fine arts collection that includes Tiffany glass and Auguste Rodin sculptures. Groups can arrange an afternoon period tea (tea sandwiches, mini scones, macaroons, mini tarts) in the game room or outdoors on the piazza.

The Haan Mansion Museum of Indiana Art was the State of Connecticut building at the 1904 St. Louis World’s Fair. Immediately after the fair, it was moved to Lafayette to become the residence of Mr. and Mrs. William Potter. Of chief interest are paintings, ceramics and sculpture by Indiana artists, plus American-made furniture from the Renaissance Revival period of 1860-1890. On display are three vases from the fair, one of them a prize winner that stands seven feet tall.

A survey of Indiana’s magnificent mansions would not be complete without a mention of the Seiberling Mansion in Kokomo. Built in 1891 by Monroe Seiberling, who made his fortune in the Indiana natural gas boom of the late 19th century, it’s a combination of the Queen Anne and Romanesque Revival styles. The ballroom on the third floor has an entrance to the rotunda outside, and the grand porch overlooks the grounds. The elegant Victorian house was originally heated and illuminated by natural gas. Its ornate interior woodwork and parquetry uses a variety of native woods, including walnut, oak, maple, cherry, mahogany and butternut. The mansion serves as the museum of the Howard County Historical Society.

For lovers of antiques, decorative arts and American history—and anyone who entertains dreams of lavish lifestyles from a bygone era—the historic house museums of Indiana have much to offer.