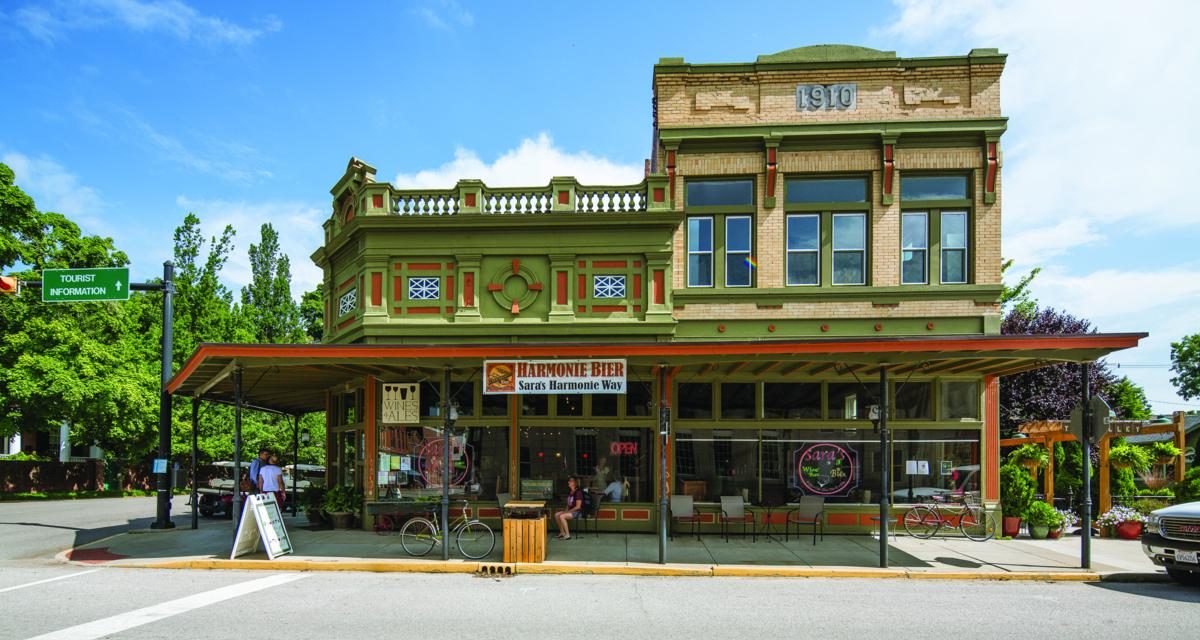 For a stroll down memory lane that will keep your travelers energized and engaged, nothing beats exploring a historic town or neighborhood with an ample supply of specialty shops and restaurants housed in vintage storefronts. Pairing nostalgic whiffs of bygone days with a chance to bring home one-of-a-kind treasures ensures the best of both worlds.

Here is just a sampling of historic districts throughout Indiana that lend themselves to group visits. Because the first settlements were in the southern part of the state, that region has a definite edge on 19th century trappings.

A discussion of historic districts in Southern Indiana is not complete without a mention of New Harmony, a tidy little Wabash River town 30 miles west of Evansville. Historic New Harmony, a unified program of the University of Southern Indiana and Indiana State Museum and Historic Sites, owns and maintains 40 properties; many of them were built from 1814-1824 by the Harmonie Society, a German religious communal group from Pennsylvania with visions of creating the perfect society. These pioneers excelled in craftsmanship and agricultural pursuits. But after 10 years, the Germans sold their settlement to philanthropists who tried to organize a different kind of utopia, an intellectual one based on education and social equality.

Guided tours of New Harmony (pop. 800) allow entrance into some of the original buildings scattered about town. Also available are cell phone tours and maps for self-guided walks. Walking tours typically last two hours and start with a 10-minute orientation film at the Atheneum Visitor Center. Tours with step-on interpreters can stop at a number of historic sites or merely go past them. Sites include simple frame houses, Community House #2 (once a dormitory for men and women), Thrall’s Opera House (originally a dormitory) and the Working Men’s Institute Museum and Library. Also of note is the town’s Harmonist Labyrinth, designed as a place of meditation and reflection with only one true path to the center. 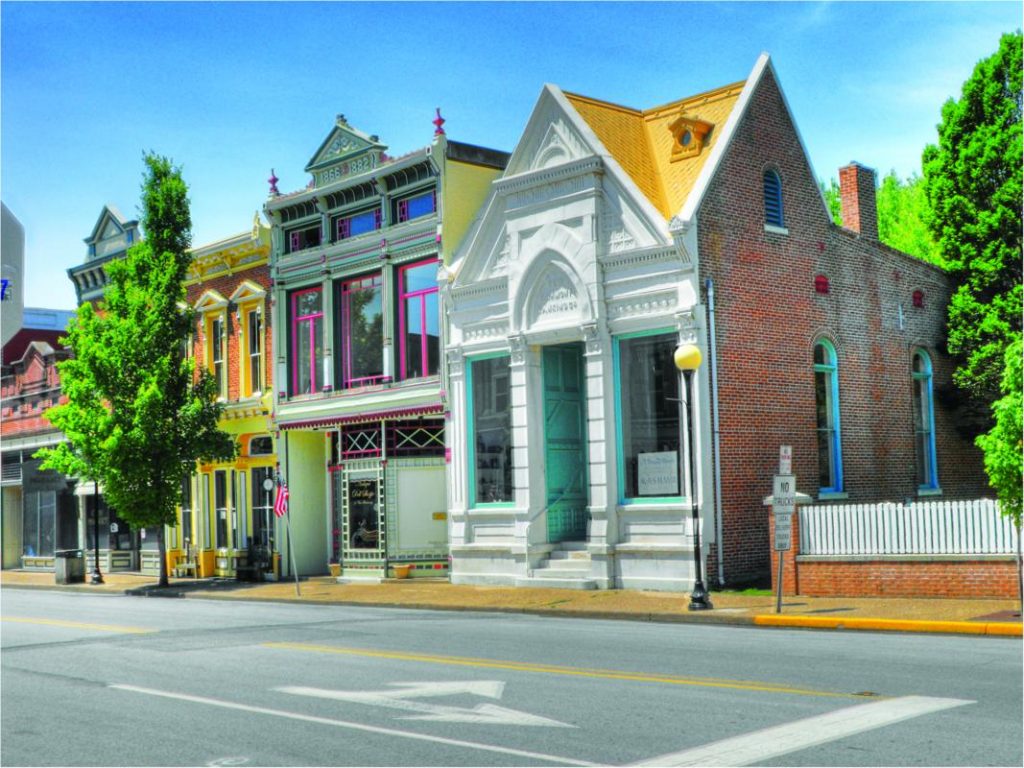 As an early center for scientific and other educational endeavors, New Harmony celebrates the arts. The small commercial area around Main and Church streets abounds with art galleries and shops purveying crafts, antiques, books and gifts. Admission is free to the New Harmony Gallery of Contemporary Art on Main Street. Eateries include the Red Geranium Restaurant (adjacent to the 100-room New Harmony Inn), The Yellow Tavern and Sara’s Harmony Way Wine Bar and Pub, which serves a Harmonist craft beer from an 1820s recipe. 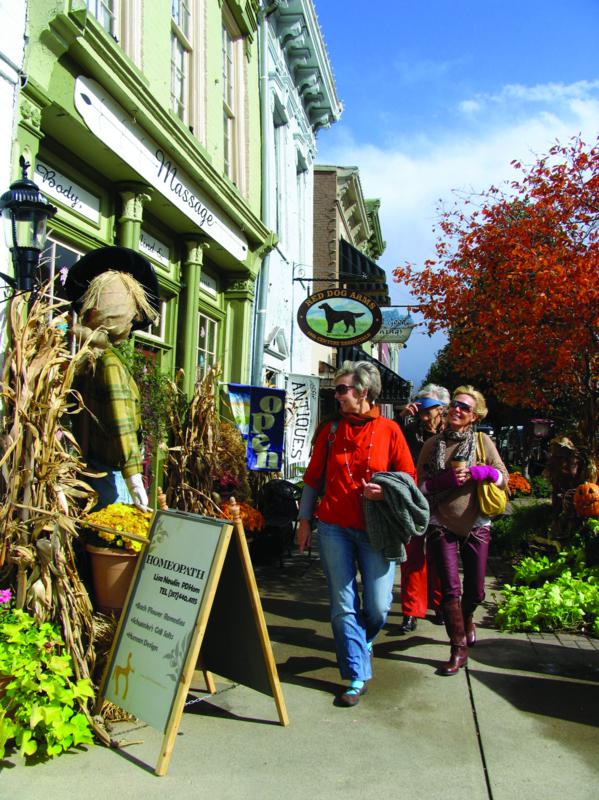 Madison, one of the Midwest’s prettiest and best-preserved towns, claims the country’s largest contiguous National Historic District. A virtual museum covering 133 blocks, it counts more than 1,500 buildings listed in the National Register of Historic Places. Many of the landmarks date to the early and mid-1800s, when Madison was a big Ohio River port during the steamboat era.

Historic Madison, Inc., the force behind the town’s preservation efforts, operates several of the buildings regularly open for tours. Schroeder Saddletree Factory Museum, a premier industrial heritage site and the only attraction of its kind, shows how the Schroeder family made wooden frames for saddle makers (the “skeleton” under the padding and leather), clothespins and other products between 1878 and 1972. The Dr. William Hutchings Office & Museum, filled with surgical tools, early electrical healing devices and other artifacts, is one of the most authentic 19th century medical history restorations in the U.S.

History also permeates Corydon (pop. 3,100), which served as the first state capital of Indiana between 1816 and 1825. The idyllic town square is dominated by the Old State Capitol, a Federal-style limestone building with a stately cupola. The House of Representatives met on the first floor, the Senate and Supreme Court on the second. The State House, as some Cordydonians call it, was the Harrison County courthouse as well. 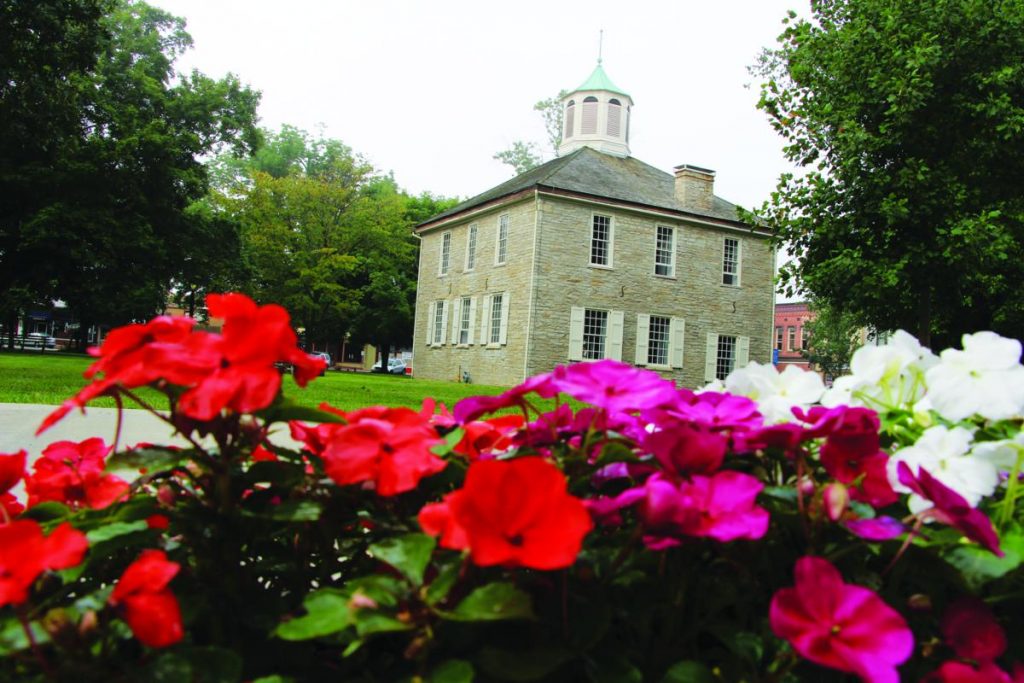 Points of interest on the walking tour map of downtown Corydon include the town’s oldest house, built in 1807. The oldest building, known as Branham Tavern, was built sometime before 1807 as the Corydon headquarters of General William Henry Harrison, governor of the Indiana territory. A sandstone memorial to the Constitution Elm surrounds the trunk of a majestic elm tree under which Indiana’s constitution was drawn up during the hot summer of 1816; the tree is a revered symbol of the Hoosier State’s beginnings.

Perched on the banks of the Ohio River just east of Evansville, Newburgh (pop. 3,200) was originally settled in 1803. By 1850 the community had become one of the largest river ports between Cincinnati and New Orleans, and in 1862 it was the first northern city captured by the Confederate army.

Newburgh is full of historical markers attached to 19th century commercial buildings and Civil War-era homes in a variety of architectural styles. A walking tour guide developed by Historic Newburgh, Inc. points the way to landmarks such as the 1841 Exchange Hotel, which was turned into a Union hospital during the Civil War. The Newburgh Museum occupies the first floor of Preservation Hall, a stately brick structure that once served as a Presbyterian church and town hall. Exhibits chronicle events like the South’s surprise raid on the town.

In Indianapolis, the tree-shaded cobblestone streets of Lockerbie Square Historic District offer a respite from the traffic and bright lights of the city center just blocks away. Located on the northeast edge of downtown, Lockerbie Square is the city’s oldest remaining residential neighborhood, comprising an eclectic mix of Italianate, Federal and Queen Anne houses. Germans and other working-class immigrants first settled there in the 1840s and ’50s.

The collection of well-kept cottages and a few brick mansions, many of them rescued from neglect by urban pioneers during a big restoration push starting in the late 1960s, may be seen on guided walking tours organized by the Historic Landmarks Foundation of Indiana. The district was placed in the National Register of Historic Places in 1973.

The neighborhood’s most prominent attraction, on Lockerbie Street, is the James Whitcomb Riley Home, a red-brick residence where the beloved Hoosier poet lived for two decades until his death in 1916. He was known to give candy to children on his regular walks. Riley described Lockerbie Square as being “nestled away from the noise of the city and the heat of the day.”

The quiet enclave, however, is a just short walk from the art galleries, theaters, restaurants and funky shops of Mass Ave Cultural District. Along the six-block stretch of Massachusetts Avenue, shoppers enjoy searching for treasures and treats at shops like Silver in the City, Homepsun: Modern Homemade, Indy Reads Books, The Flying Cupcake, The Best Chocolate in Town and Stout’s Footwear: the oldest continuously operated shoe store in the United States.

Richmond, a true gem in Eastern Indiana, takes pride in the lively Richmond Depot District, one of six historic districts in town. Comprising four city blocks with most of the activity on North E Street and Fort Wayne Avenue, the shopping/dining/entertainment hub is centered around the 1902 Pennsylvania Railroad Depot, a Neo-Classical brick building designed by world-renowned architect Daniel H. Burnham, the genius behind Union Station in Washington D.C., The Rookery in Chicago and New York’s iconic Flatiron Building. 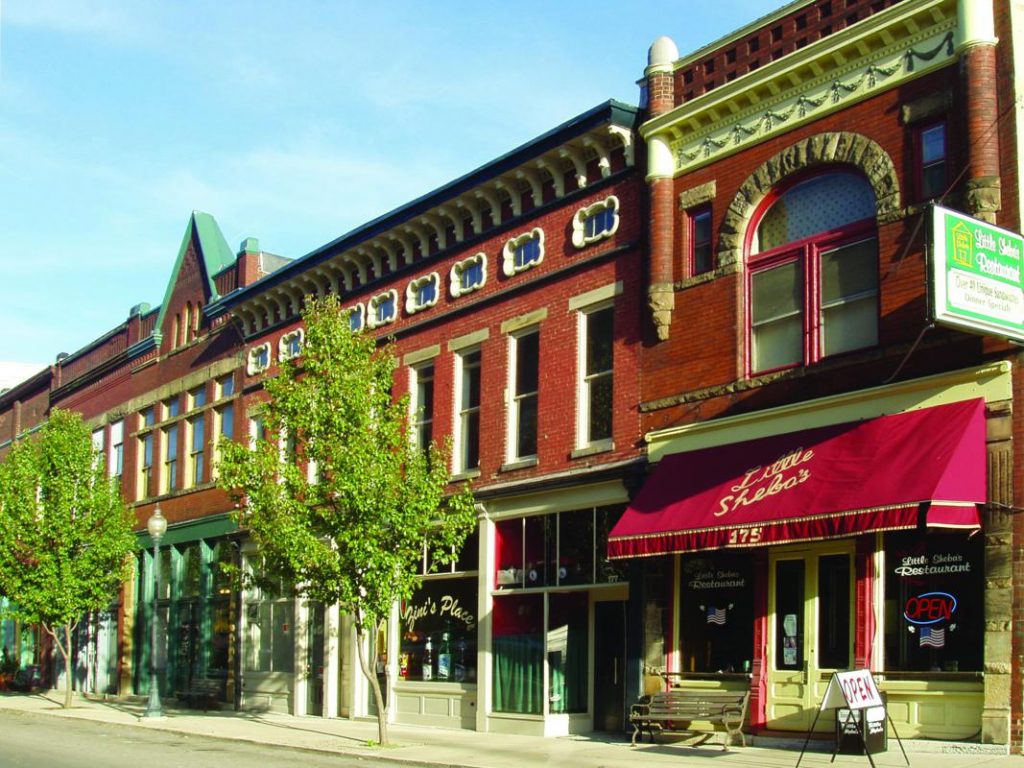 Visitors in the Depot District will find dozens of independently owned shops offering an array of antiques, artworks, home decor, fashions and books. At Paint the Towne, group members can decorate their own pottery or canvas. There are nine eateries, pubs and breweries, some offering live music. In an old firehouse, hickory-smoked barbecue is served up at Firehouse BBQ and Blues, while made-to-order sandwiches and Italian favorites draw crowds to Maria Mitrione’s Italian Market.

Listed in the National Register of Historic Places, the Depot District boasts a treasure chest of commercial buildings dating from the 1860s to 1910; many are rich in architectural details, with Italianate as the dominating motif. Fans of old cars flock to the National Model T Ford Museum to view Model Ts and other vintage vehicles.