Caribbean Whirl on Adventure of the Seas

Sailing in the Caribbean provides diverse options thanks to a wide variety of cruise itineraries along with sailings from different departure cities. Last fall’s horrific back-to-back hurricanes, with Hurricane Maria following Hurricane Irma, did, however, damage some of the islands. Other Caribbean islands didn’t fall into the way of the hurricane’s path. Cruise lines had to alter some itineraries but have been returning to some islands that weathered these storms. While sailing recently on Royal Caribbean International’s Adventure of the Seas, I had the opportunity to revisit islands as well as enjoy the ship.

Adventure of the Seas: What’s New

The 3,286-guest Adventure of the Seas, a Voyager class ship with a crew of 1,181, is 1,020 feet long and 138,219 gross register tons.  In November 2016, she underwent a $61 million refurbishment and revitalization that included adding several of the innovations Royal Caribbean International is known for.  Dual racer waterslides Cyclone and Typhoon, plus Splashaway Bay, a children’s water park, were added, along with the popular FlowRider® surf simulator.  Chops Grille, Royal Caribbean’s signature steakhouse, along with Boleros Latin Lounge and Izumi (Japanese cuisine), are restaurant additions. Existing staterooms were refreshed and 100 new staterooms added. A brand-new Suite Lounge accommodates luxury travelers. 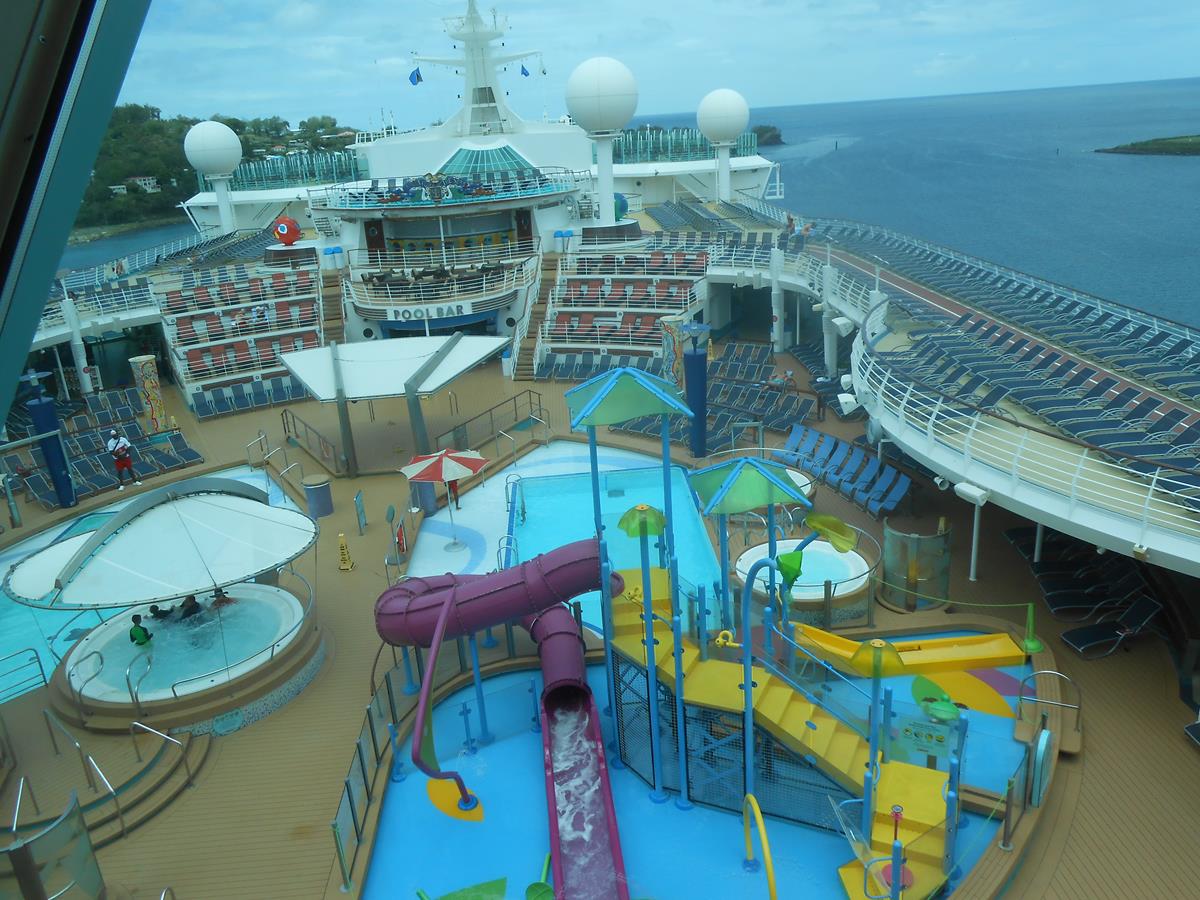 Adventure of the Sea’s on deck pool

Diverse options were available throughout the sailing. For instance, Blue Moon Night Club on Deck 14 offered late-night (after 10 p.m.) events for adults 18 years and older. Movies were shown on the Big Screen located poolside on Deck 11.  Pub entertainment varied each evening at Duck & Dog on Deck 5.  Outdoor evening parties included the Dancing under the Stars Pool Party, White Night Pool Party and Farewell Dance Party, featuring music with resident DJ Mosfine.  Another fun event was The Quest game show in Studio B.
Shows in the Imperial Lounge featured the Royal Caribbean Singers and the Adventure of the Seas Orchestra. At Boleros, Latin Dance Music with the Latin Vibes Trio took place later in the evenings. Elevation Band provided dance music poolside as well as in Boleros.
Daytime activities varied, with poolside entertainment and various seminars. A special “Cool Art, Hot Ice” ice show in Studio B was repeated a few times during the cruise. For active cruise guests, the Rock Climbing Wall, along with FlowRider® and The Perfect Storm Waterslides provided more options, along with the fitness center. The Sports Court on Deck 13 had volleyball and basketball, including tournaments. 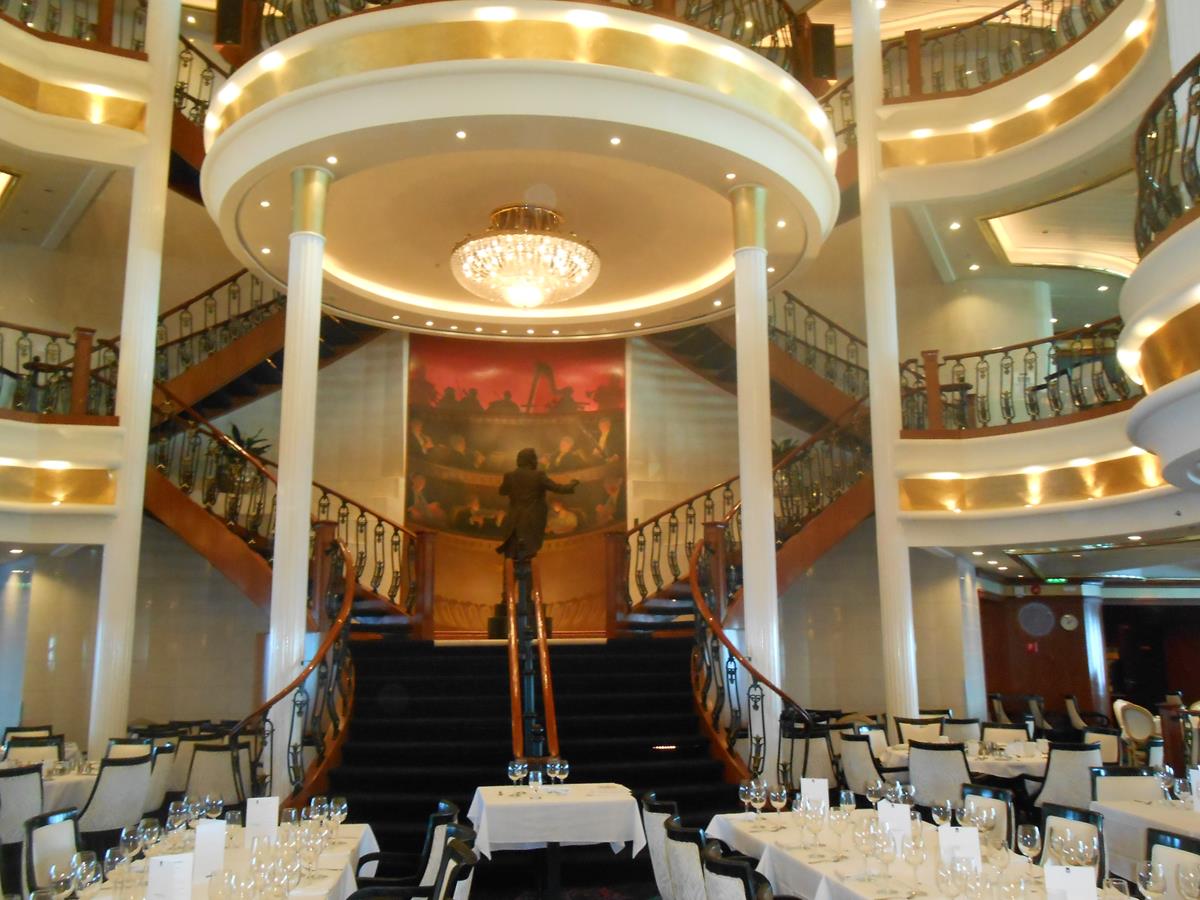 Cafe Promenade on Deck 5 offered continental breakfast and light lunch options, while Windjammer Cafe on Deck 11 had breakfast and lunch with a more casual dinner option. Sapphire Dining Room on decks 4 and 5 provided Main Seating and Second Seating for dinner, along with My Time Dining that could be reserved in advance. Specialty restaurants with reservations required (and a surcharge) included Izumi, Chops Grille, Giovanni’s Table and the Chef’s Table. 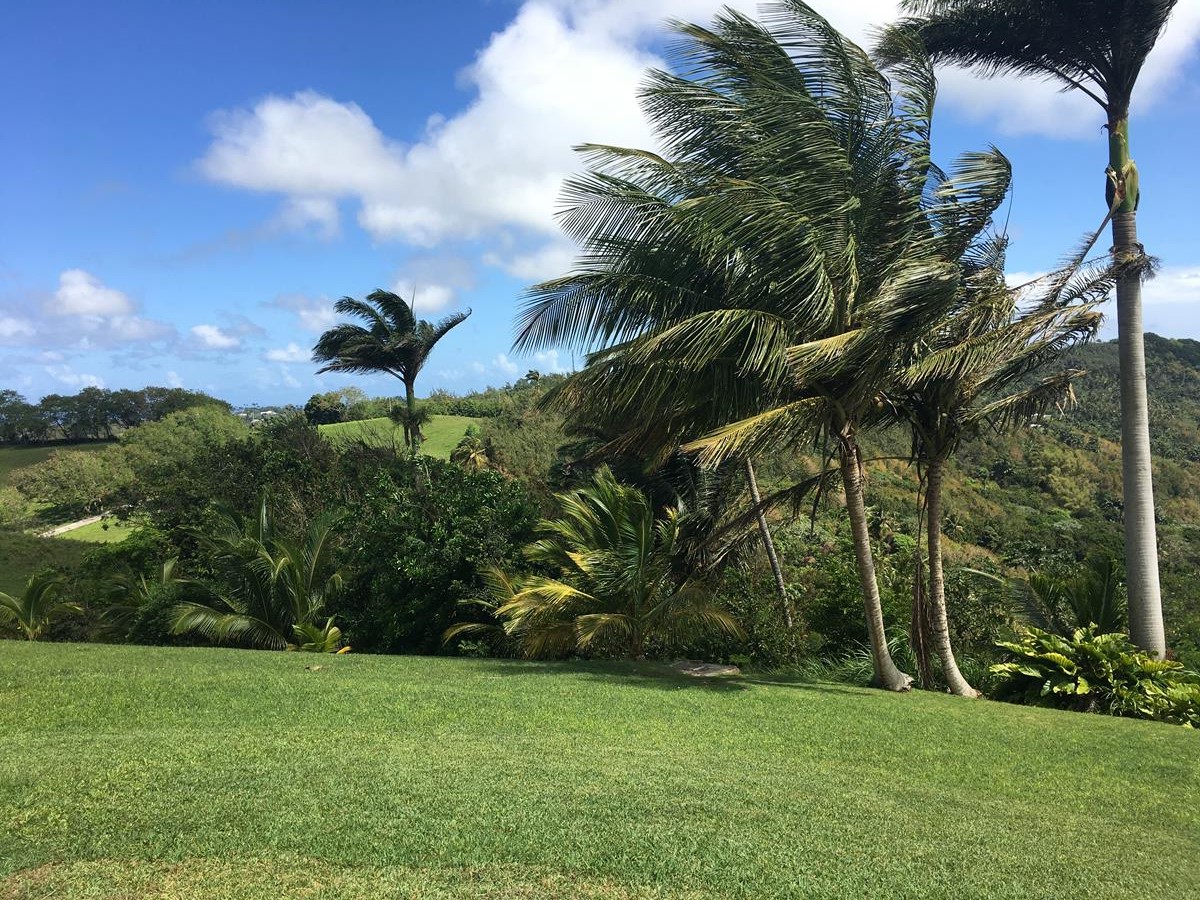 On my Adventure of the Seas’ 7-night cruise out of San Juan, Puerto Rico, the  itinerary included Philipsburg, St. Maarten; Basseterre, St. Kitts & Nevis; St. John’s, Antigua; Castries, St. Lucia; and Bridgetown, Barbados. Of those islands, St. Maarten and Puerto Rico had been hit by Hurricane Maria, but now are open.
After the back-to-back hurricanes, cruise lines changed their itineraries around but then began resuming departures from San Juan in October 2017. In early December, cruise lines started to reinstate calls to St. Maarten. 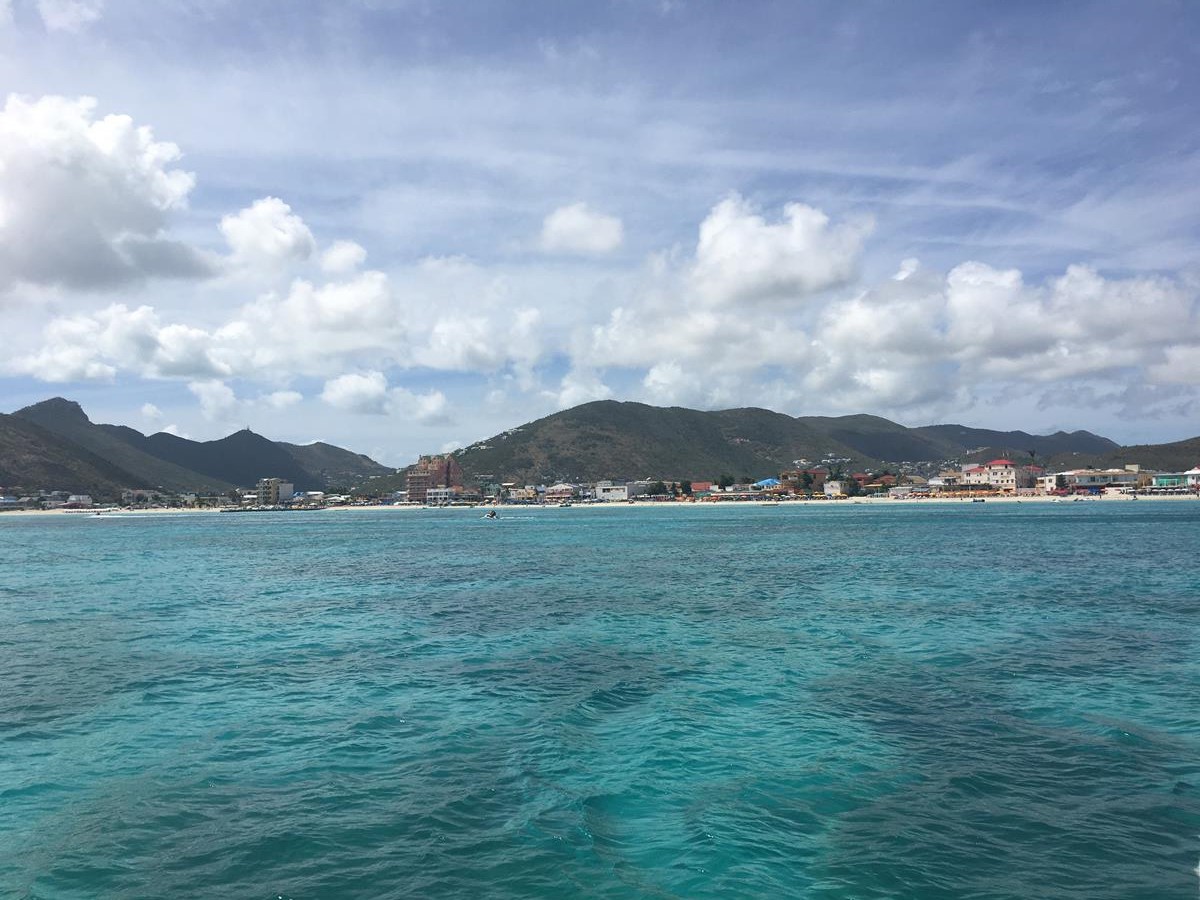 While in St. Maarten, I opted to explore a bit of Philipsburg myself rather than take one of the shore excursions. The dock where Adventure of the Seas hooked up was in good shape, and I visited several of the shops in that walking area. Then I took the roundtrip water taxi. over to Philipsburg. The beach areas there seemed in good shape, and several shops were open. Some construction was taking place making repairs. I talked with Anil, an owner of a gift shop in The Promenade Mall. He mentioned that during Hurricane Maria, winds of close to 200 miles an hour caused damage, but luckily they did not encounter any flooding. As rebuilding continues, they have been making it through.

Adventure of the Seas docked in St. John’s and while there I did a fun shore excursion covering different areas, including Shirley Heights Lookout, which provides amazing views of the Atlantic Ocean, and Nelson’s Dockyard, a restored naval station. Antigua escaped much of the damage caused by hurricanes Maria and Irma. Unfortunately Barbuda, its sister island, was severely impacted by the storms; the guide shared what they have been doing to provide ongoing assistance.

The cruise port in Basseterre, St. Kitts did not sustain any damage, and St. Kitts started welcoming cruise ships beginning September 23, 2017.  A fan of visiting forts, I did a shore excursion that included Brimstone Hill (a well-preserved UNESCO-listed fortress and one of my personal favorites) and Fairview Great House. The panoramic views were phenomenal. 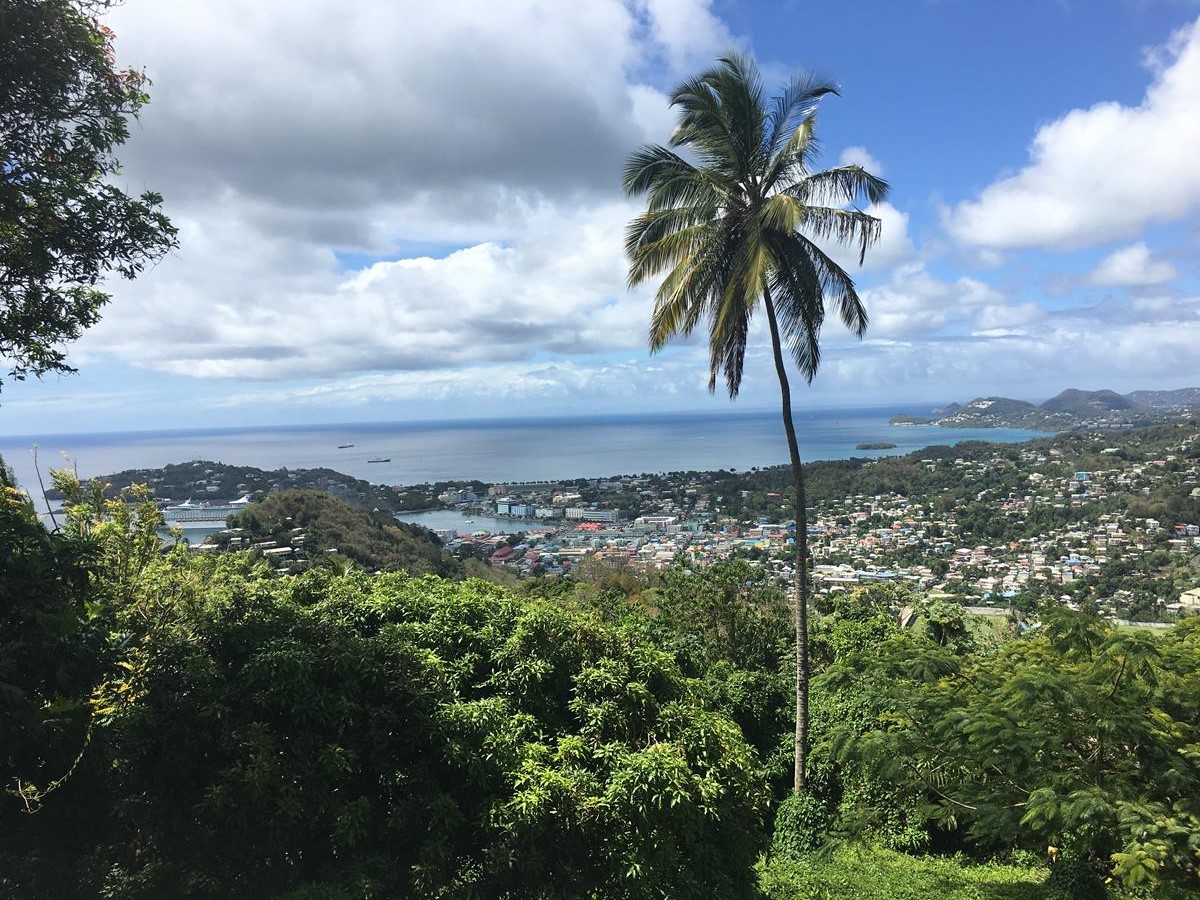 Castries, where cruise ships dock, has a nice shopping area, along with being where the shore excursion tours depart. St. Lucia was lucky not to be affected by any of the hurricanes that occurred in 2017. Being one who loves the rich tropical vegetation the mountains, I did a scenic drive tour that included the spectacular coastline and a stop at Pigeon Island.

Barbados also was fortunate not to have been hit by hurricanes Irma nor Maria.  The port of Bridgetown, where cruise ships dock, has an area with indoor and outdoor shops; tours depart from there. Barbados has diverse terrain and historical places, including Harrison’s Cave, historical St. John’s Parish and Bathsheba on the eastern coast with its crashing surf and beautiful coastline. I opted to take the coast-to-coast scenic drive to capture photos of the sugar cane fields, plantations, Bathsheba and the eastern coast, and spectacular views from St. John’s Parish.

Besides her departures from San Juan, Adventure of the Seas is offering some 8- night Eastern Caribbean itineraries and 6-night Western Caribbean sailings starting in October 2018 and going into April 2019.
Royal Caribbean International offers diverse cruise itineraries on 25 ships in 64 countries on six different continents. Destinations include Alaska, Asia, Australia, Bahamas, Bermuda, Canada and the Caribbean. Other options include Hawaii, the Mediterranean, New England, New Zealand, Northern Europe and Transatlantic cruises.
With dedicated, complimentary youth and teen programs, along with diverse onboard activities, dining and entertainment, as well as unique shore excursions, Royal Caribbean International is a great option for groups to consider.