Exploring the Islands and Waterways of New York City

Iconic sights and offbeat discoveries await tourists in Manhattan and beyond

Whether taking in New York Harbor from a cruise ship, sightseeing boat or the Staten Island ferry, it’s not unusual to get goosebumps or become a little misty-eyed when your vessel passes the Statue of Liberty, its torch raised high as a beacon of American freedom. The copper-sheathed landmark, standing majestically on a speck of real estate called Liberty Island, greeted millions of hopeful immigrants at the end of their trans-Atlantic journeys during peak migration years in the late 19th and early 20th centuries. Competing with views of the statue is the mighty Manhattan skyline. 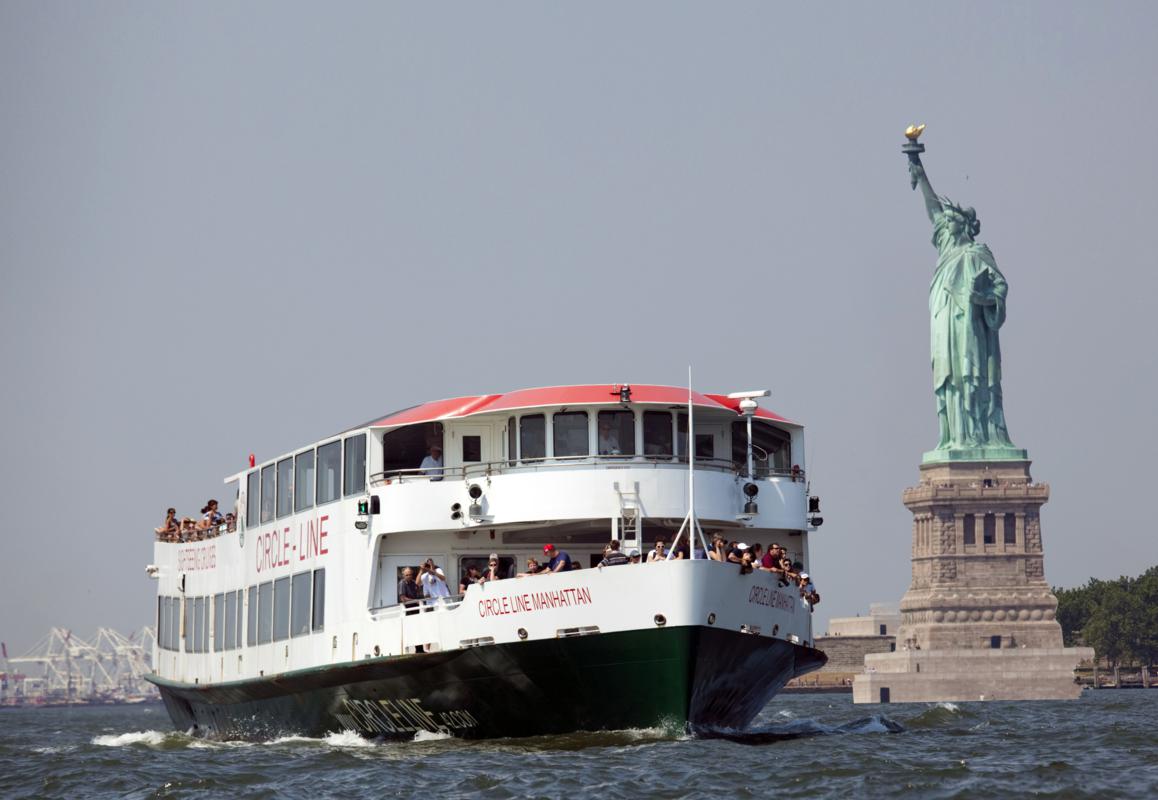 Manhattan and Liberty are just two of the many islands that make up New York City, a jigsaw puzzle of land and water. To get a handle on the confusing geography, leave the traffic-clogged streets behind and hop onboard a tour boat. Circle Line, the best-known cruise operator, offers a 2½-hour, around-Manhattan excursion that plies the Hudson, East and Harlem rivers while showcasing 21 bridges and all five boroughs—Manhattan, Brooklyn, Queens, the Bronx and Staten Island. A shorter option, its 1½-hour “Landmarks Cruise,” features Lower and Midtown Manhattan. All Circle Line cruises provide close-up views of the Statue of Liberty.
Another cruise option is the free Staten Island ferry. The 25-minute commute—from the southern end of Manhattan to Staten Island’s St. George waterfront—affords panoramas of Miss Liberty, the Lower Manhattan skyline, Brooklyn shore and Governors Island, the latter a former military base turned recreation spot. Most tourists arriving in Staten Island immediately board the next ferry back to Manhattan, but a major attraction taking shape in St. George soon will be cause for lingering. Scheduled for completion this year, Empire Outlets will be New York City’s first outlet mall, with about 100 shops. 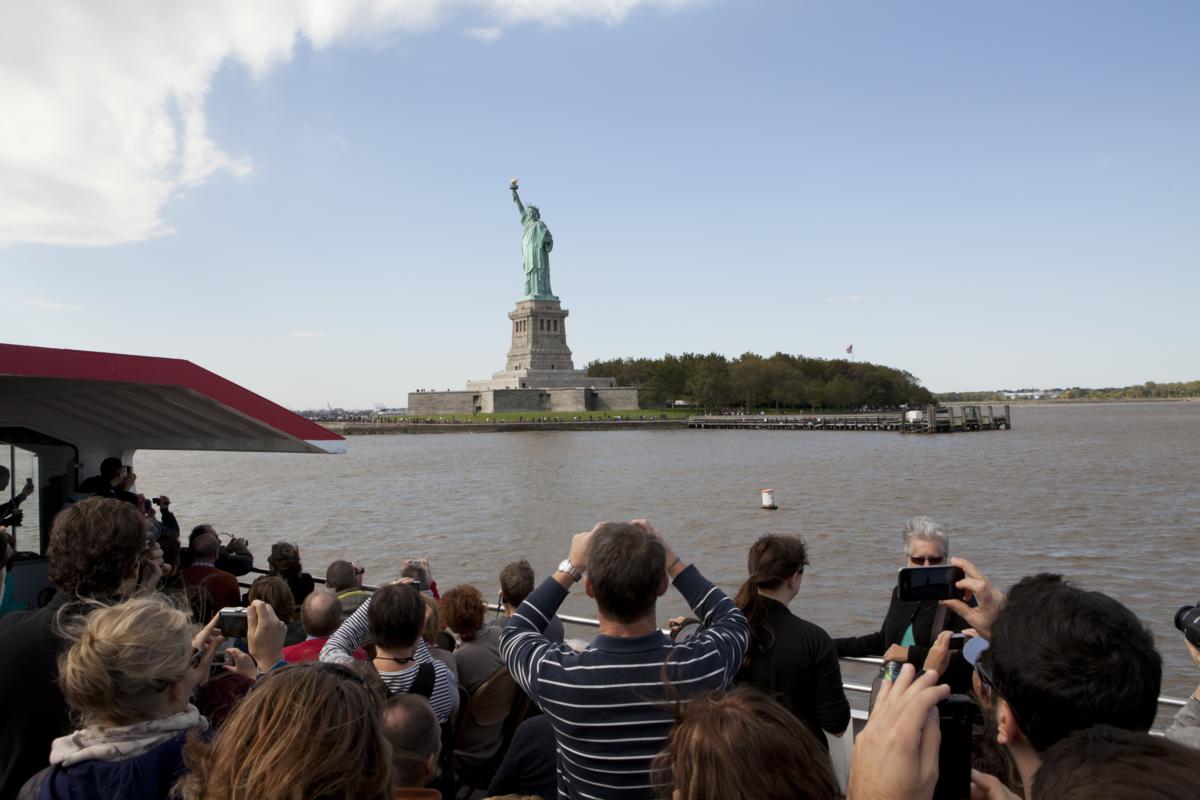 Ferries from Battery Park at the southern tip of Manhattan take tourists to Liberty Island. (Photo by Marley White/NYC & Company)

In Lower Manhattan’s Battery Park, next to the Staten Island terminal, Statue Cruises ferries depart for Liberty Island (a 20-minute trip) and continue to the Ellis Island National Museum of Immigration, five minutes away. The brand-new Statue of Liberty Museum, set to open in 2019, will include an immersive theater experience.
Roosevelt Island, a refuge from the urban frenzy in the East River, is mostly residential and doesn’t claim any blockbuster sights but does have Franklin D. Roosevelt Four Freedoms Park, a memorial to our 32nd president. From riverside vantage points, the sleek, glass-walled United Nations Secretariat and Art Deco-style Chrysler buildings dominate vistas of Manhattan. Half the fun of visiting this sliver of land is taking the bright-red Roosevelt Island aerial tramway, which offers a four-minute ride from the station at Second Avenue and 60th Street in Midtown East. 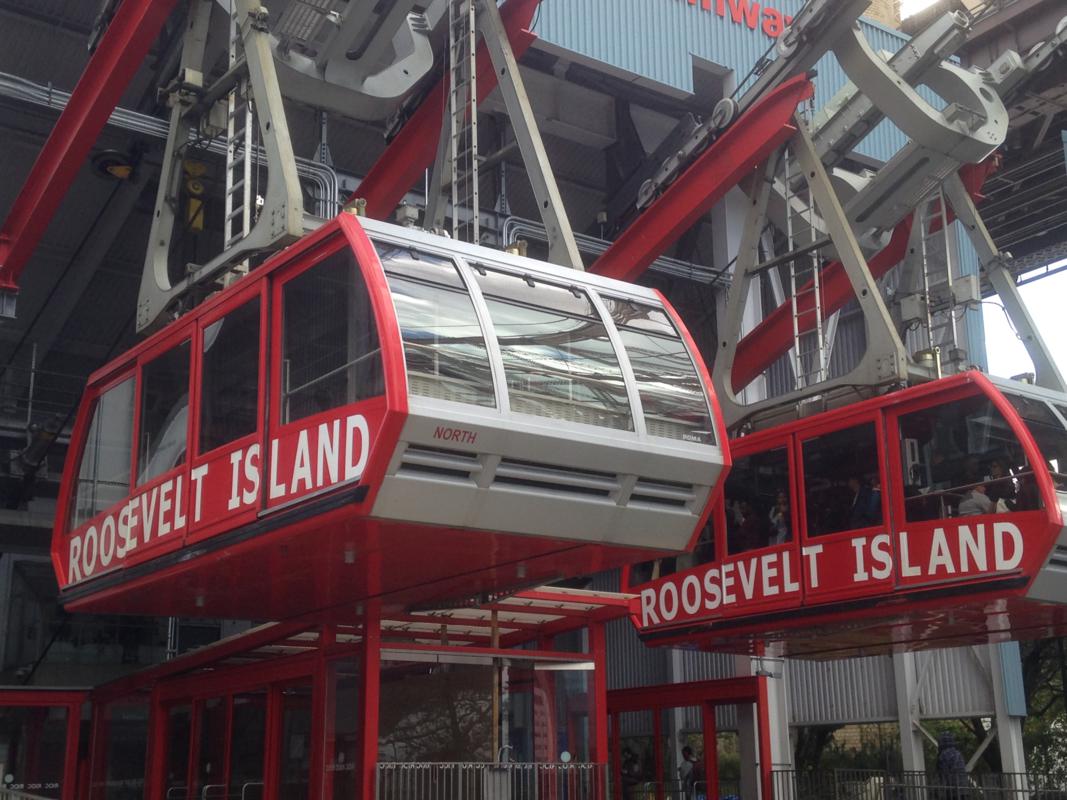 Just as Roosevelt Island seems like a town unto itself, United Nations Headquarters, occupying 18 acres of East River frontage, feels like a different country. In fact, it’s technically international territory with its own police force and fire department. One-hour guided tours ($20) include the General Assembly and major council chambers, but everyone is welcome to peruse the free exhibits in the visitors lobby. In shops on the lower level, souvenirs range from U.N.-logo yoyos, snow globes and teddy bears to miniature flags of every member nation from Afghanistan to Zimbabwe. At the post office you can mail postcards with U.N. stamps. One of Manhattan’s best-kept secrets is the three-course lunch ($39.99 plus beverage, tax and tip) served in the Delegates Dining Room, open to the public on weekdays; advance reservations required.
South Street Seaport, another East River tourist magnet, is a historic district with a maritime museum, vintage tall ships for boarding, outdoor entertainment, and smart shops and restaurants. Fine examples of early 19th century warehouse architecture grace the cobblestone streets of a neighborhood that was once home to the Fulton Fish Market. The district is being revitalized with trend-setting culinary, retail and cultural experiences. Cruises to the Statue of Liberty depart from adjacent Pier 16. After poking around the Seaport, head to the pedestrian/bicycle entrance of the Brooklyn Bridge for a walk across one of the great symbols of New York City. The trek to Brooklyn, on a path raised above lanes of car traffic, takes about a half hour. 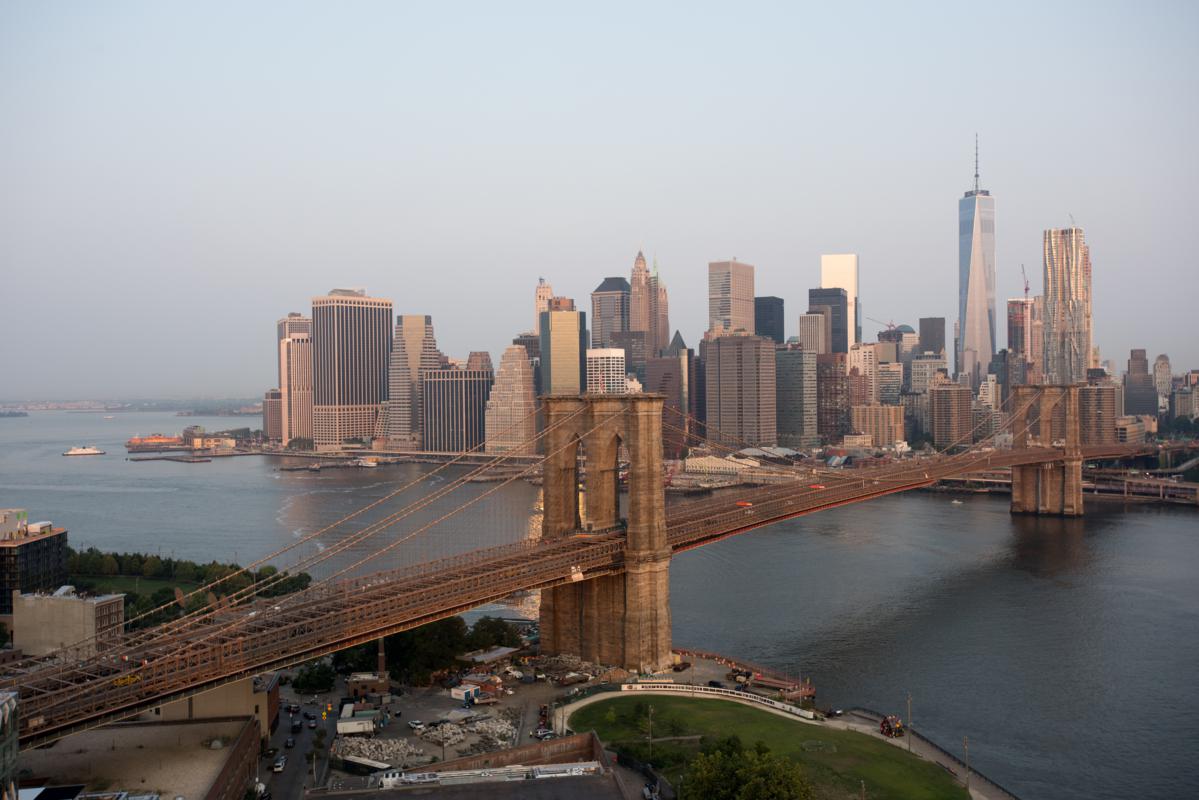 Central Park, a great place to people-watch and commune with nature, also appeals to walkers. It flanks a stretch of Fifth Avenue designated as Museum Mile. In this swanky Upper East Side neighborhood you’ll find many cultural treasures, most notably the Metropolitan Museum of Art and Solomon R. Guggenheim Museum. It would take a week or two to see everything in The Met, one of largest museums in the world, so just concentrate on a few galleries, perhaps zeroing in on Egyptian antiquities medieval arms and armor, or a favorite period in European painting. Or take a docent-led, one-hour “Museum Highlights” tour that focuses on five or six works of art. At the Guggenheim, just as famous for its Frank Lloyd Wright-designed building as its modern and contemporary artworks, patrons explore the continuous gallery on the grand, quarter-mile ramp that spirals under the rotunda’s skylighted dome.
Live theater also sparks the city’s cultural life, and nowhere is that more evident than on the crowded streets around Broadway and Times Square. The Phantom of the Opera is Broadway’s longest-running show, a fixture at the Majestic Theatre since 1988, followed by the musicals Chicago and The Lion King, which debuted in 1996 and 1997, respectively. The hottest ticket these days is Lin-Manuel Miranda’s Hamilton. On our recent trip we opted for School of Rock at the Winter Garden Theatre, an Andrew Lloyd Webber musical based on the hilarious 2003 movie of the same title starring Jack Black. The story of a wannabe rock star posing as a substitute teacher at an elite private school features Broadway’s first-ever kids rock band. Full of laughs, School of Rock brought us to tears more than once. 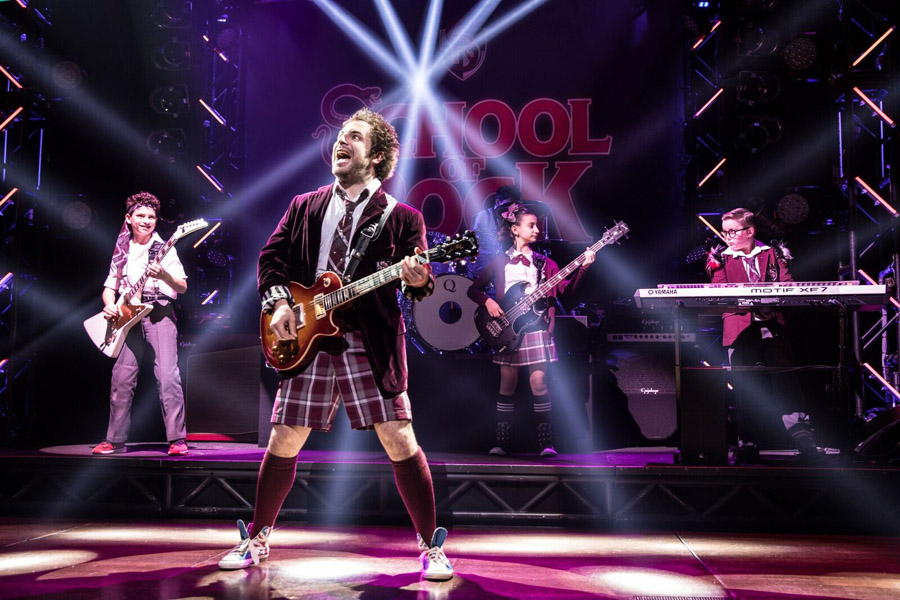 If you don’t want to spend $100 or more for a Broadway show, plan ahead and apply online for free tickets to a TV show taping on days you’ll be in New York. We recently sat in the studio audiences of The Dr. Oz Show, Comedy Central’s The Daily Show with Trevor Noah and NBC’s The Tonight Show Starring Jimmy Fallon. Other shows taped in New York include Live with Kelly and Ryan, The Rachael Ray Show, Harry starring Harry Connick Jr., food show The Chew, Late Night with Seth Meyers and CBS’s The Late Show with Stephen Colbert. Sometimes there are audience giveaways such as books written by authors appearing on the show.

Know Before You Go

Sightseeing Tips: New York CityPASS, a booklet of six tickets to top New York attractions ($122 for adults, $98 youth), can save you money over the cost of individual admissions and lets you skip the long lines, too. In addition to the American Museum of Natural History, Metropolitan Museum of Art and Empire State Building, the pass includes three option tickets. One gives you a choice between the 9/11 Memorial & Museum or Intrepid Sea, Air & Space Museum (occupying a WWII-era aircraft carrier by the Hudson River’s West Side cruise terminal). Another ticket can be used for either Top of the Rock at Rockefeller Center or the Guggenheim Museum. And there’s one for either the Statue of Liberty/Ellis Island ferry or a Circle Line cruise. The pass is valid for nine days. (www.citypass.com)
Hotels: The intimate Casablanca Hotel, decorated in Moroccan motifs, is a quiet oasis on West 43rd Street, just steps from Times Square. Inspired by the romance of the classic 1942 movie Casablanca, it features Rick’s Cafe, a second-floor lounge offering a complimentary breakfast buffet, all-day refreshments and evening wine-and-cheese reception. Wooden blinds, ceiling fans, cane furniture and paintings of Moroccan scenes capture the flavor of North Africa in guest rooms and public areas. (www.casablanchotel.com). The Hotel Elysee, another highly recommended boutique hotel, exudes the casual elegance and charm of a French country inn. Guests gather in its Club Room for the included breakfast, all-day treats and a wine reception with hors d’oeuvres. Located on 54th Street in Midtown East, the Elysee is close to posh shops on Madison and Fifth avenues. (www.elyseehotel.com)
Tourist Information: NYC & Company, 800-692-8474; www.nycgo.com.