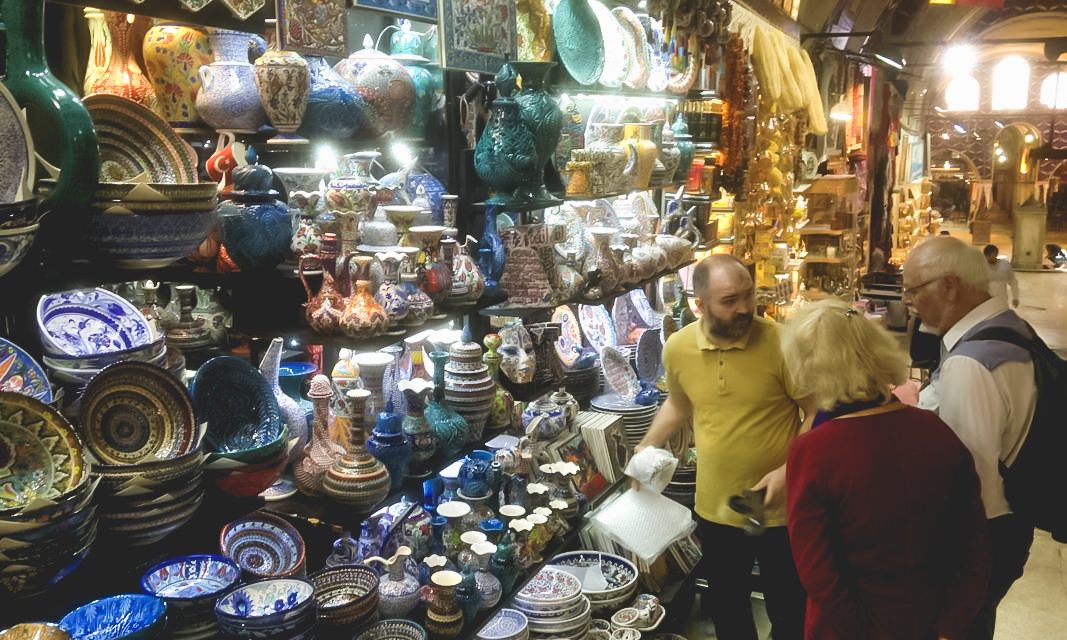 Long after the memories of famous tourist sights have faded away, it’s the Turkish people and their hospitality that visitors remember most vividly

In Ürgüp, a little town built among the rocky outcroppings of central Turkey’s Cappadocia region, my adult son Jeremy and I followed up dinner at cliffside Ziggy’s Cafe with an after-dark trip to a grocery store for some sweet treats. Coming upon a tiny park on the way back to our quirky cave hotel, we headed to one of its tables to enjoy our cookies and candy.
We never made it to that table.
As soon as we entered the park, three happy-looking men in their 20s or 30s motioned us over to their table, where they were having a tea party, complete with a traditional, double-stacked, wood-burning silver teapot. We couldn’t resist their enthusiastic invitation, so we shook hands, exchanged names and sat down over cups of freshly brewed tea (the beverage of choice in Turkey), candy bars and a bag of pumpkin seeds. They didn’t speak English, and we didn’t know Turkish. But when the sister of one walked by, she came over and tried out her fractured English, clearly struggling but eager to meet us. After a half hour in the park, Nurgül invited us to her house, a few blocks away, for a home visit we will never forget.
Events of that evening in Ürgüp were just one instance of the warm Turkish hospitality we experienced during a week exploring Istanbul, Cappadocia and the Aegean port city of Kusadasi. We, of course, wanted to see the usual tourist attractions—palaces, mosques, churches, archaeological sites—but slices of Turkish life also were on the agenda.
Straddling Europe and Asia, Turkey is a little exotic, a bit mysterious and a part of the world that sees more than its share of turmoil. We were up for the adventure. 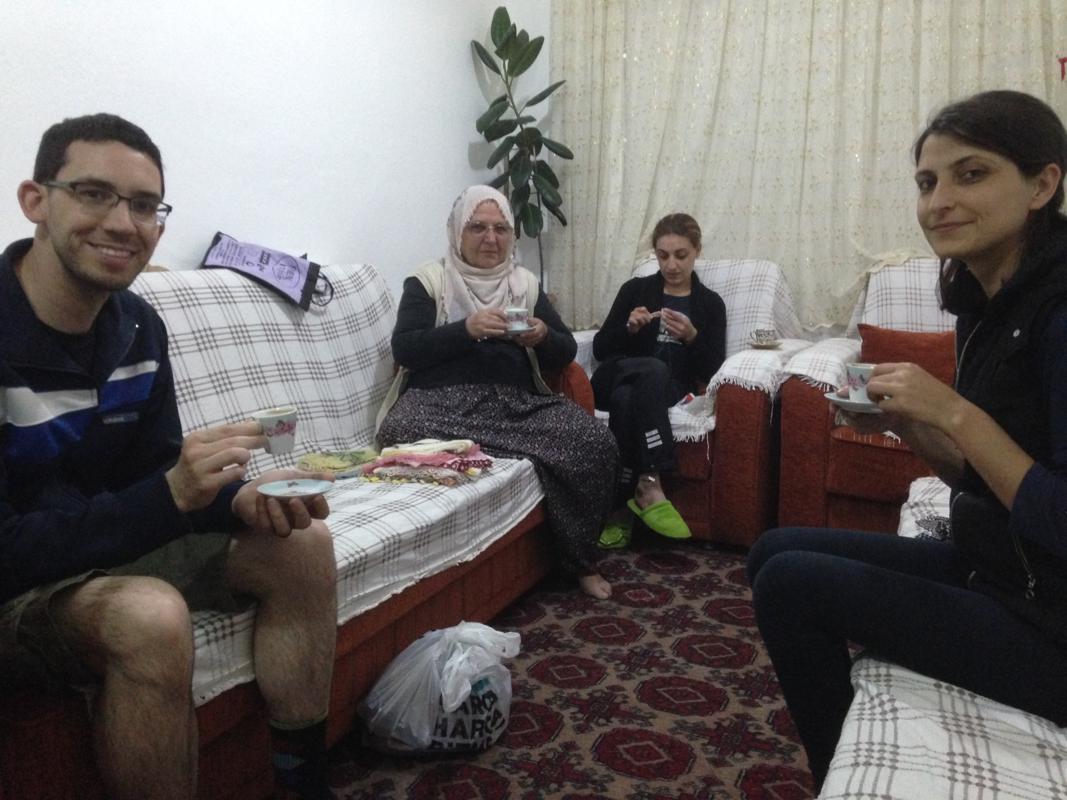 After the park encounter, we found ourselves seated in the living room of our newfound friend. Nurgül introduced us to her mother (in traditional headscarf and pantaloons) and younger sister, and soon we were all sipping thick Turkish coffee from little cups. Communication was not easy, but my son and I asked questions about Turkish life and about their house, and they had fun trying to guess our ages. We learned that it had taken the mother two years to make the intricately patterned, Ottoman-style rug under our feet. Mom’s talents also included making bead-fringed scarves, and Nurgül’s sister brought out six or eight pieces of her work, one of which we ended up buying, along with a bead necklace Nurgül had crafted. Before leaving, we got a house tour that included the cellar (jars of tomatoes, sacks of potatoes), the garden (mint, onions, grapevines, apricot trees) and the rooftop with its lines for drying clothes. We walked back to our nearby hotel at 10 p.m., wondering if the young men were still fraternizing at the park. 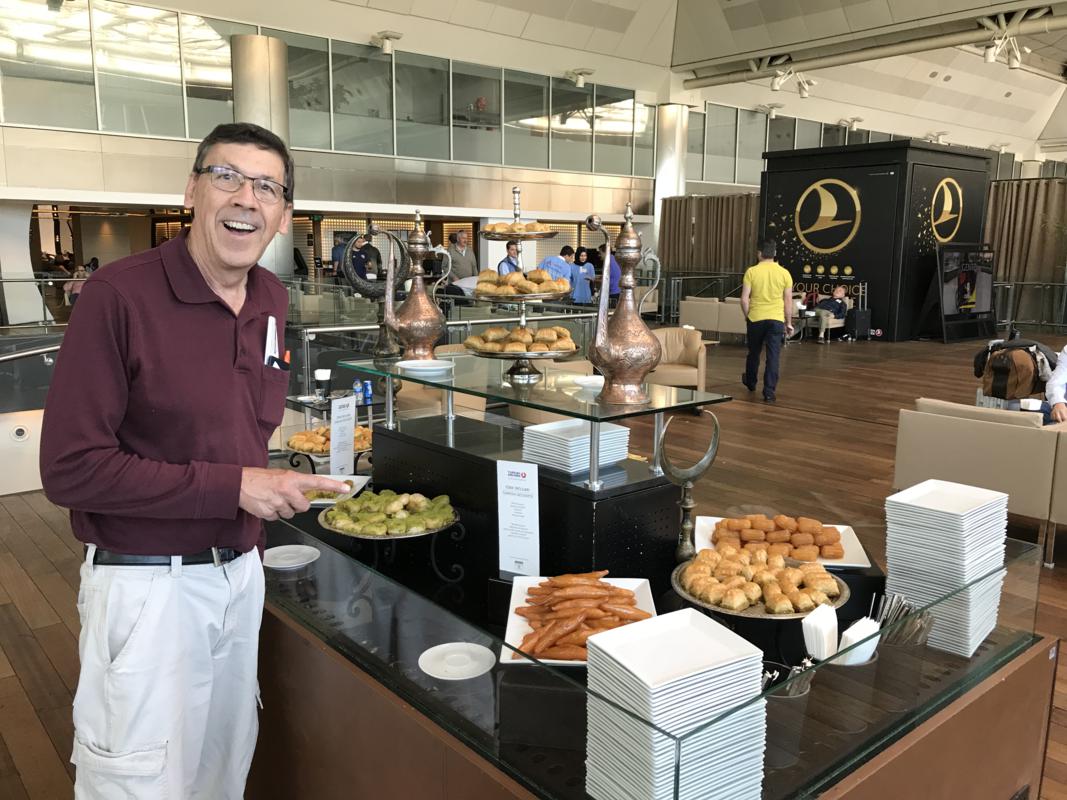 The warm Turkish welcome started the moment we took off on our 10½-hour flight to Istanbul from Chicago’s O’Hare International Airport. Flying business class on Turkish Airlines, we enjoyed the entertainment system’s almost unlimited choices (with deluxe, noise-canceling headset) and seats that recline into flat beds for a decent night’s sleep. Needless to say, time flew.
On our economy-class flights, we were always the only Americans onboard, but the friendly Turkish Airlines gate agents and flight attendants put us at ease and spoke fluent English. Airport announcements and those in the cabin were in two languages—Turkish and English. On every intra-Turkey flight, even ones that lasted just an hour, we got a hot kaşar cheese toast, which we considered more of a meal than a snack. The hearty sandwich consisted of an oblong roll with melted cheese, thyme and tomato slices. Service in economy was first class in every way.
Turkish hospitality showed its colors big-time during a six-hour layover at Istanbul’s Atatürk International Airport. There we indulged at multiple food and drink stations sprinkled across Turkish Airlines’ huge, two-level Lounge Istanbul, the ultimate airport lounge. In fact, in Skytrax surveys this oasis was voted “World’s Best Business Class Lounge” in 2015 and 2017 and has been the “World’s Best Business Class Dining Lounge” for three years running. We frequented a Thai kitchen, a kiosk with Turkish olives and a station serving up manti, a version of ravioli/tortellini in yogurt and tomato sauce. Nor could we resist Turkish kebab plates, a salad bar and made-to-order omelettes at breakfast time. Being fans of sweets, we made beelines to the trolley with honey-soaked Middle Eastern pastries and the elegant tea-room area serving Sachertorte and other Austrian-style pastries from the famous Demels of Vienna. Lounge guests had full access to Turkish wines, the local Efes beer and top-shelf spirits, including raki, the high-octane, aniseed-flavored grape brandy for which Turkey is known.  For amusement, there were a cinema, billiards table in the library, bank of TVs with news channels from around the world, remote-control road racing track, arcade games, automated grand pianos, a golf simulator and children’s play area. Massage therapists circulated to revive weary bodies, and private suites awaited those needing a nap or shower.

Help in the Big City

In Istanbul, a city of 13 million that can be rather intimidating for the casual tourist, we experienced many doses of hospitality and gestures of kindness, both of the formal variety (mostly notably at the five-star Grand Tarabya Hotel, a member of  Leading Hotels of the World) and on the street.
In the Istanbul University area, when we were lost and looking for the Metro station, a female student approached us as soon as I pulled out my map, sensing we needed help. She walked with us a few blocks and then pointed us in the right direction. On two occasions while riding the Metro (Istanbul’s impressive subway system), young men gave up their seats to me (I am over 60) as soon as we entered the crowded car.
Another time we were riding an Istanbul tram, and I asked a passenger how to transfer to a funicular train to Taksim Square. He couldn’t tell us (or understand us), but when we got off at the end of the line and exited the station, a young couple who had overheard the conversation pointed out to us the funicular entrance inside the station, getting the transit employee to let us back in without paying again. 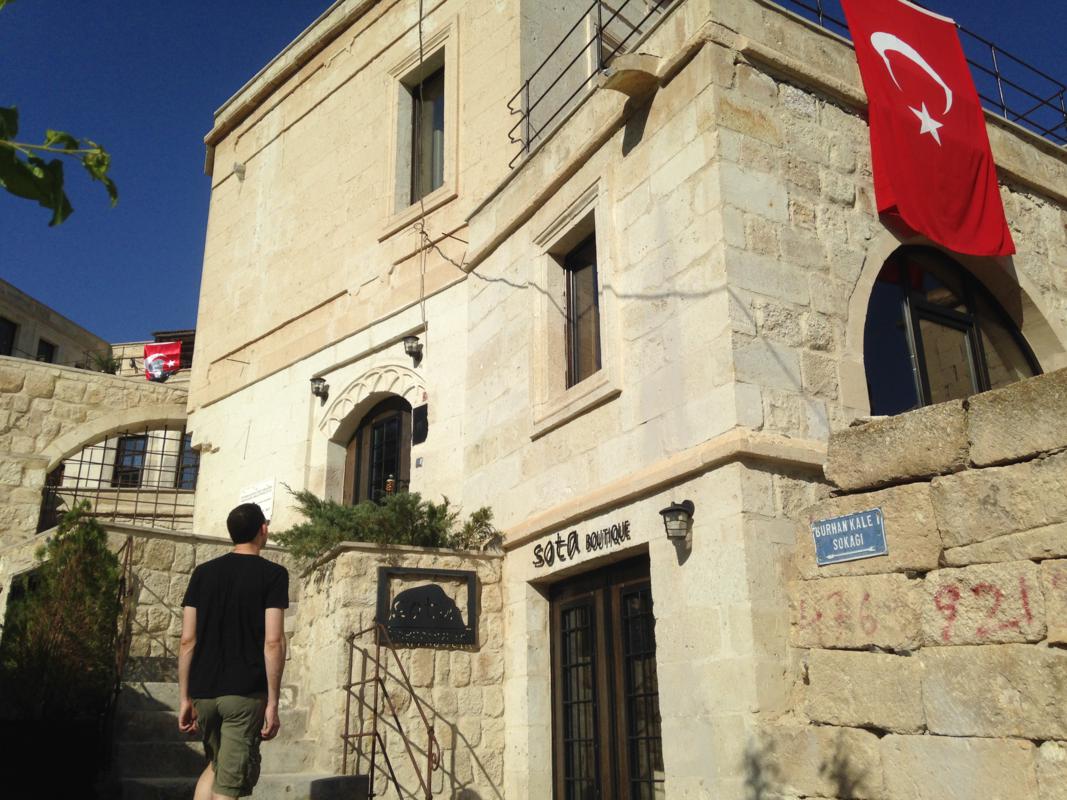 A happy place to rest your head in Kusadasi, an Aegean port city in western Turkey.

Besides receiving expert advice for navigating Istanbul from the concierge of the Grand Tarabya, we also were helped by the proprietors of smaller hotels in other cities. Nil Tuncer, owner of the Sota Cappadocia, our boutique-style cave hotel in Ürgüp, took a personal interest in making sure we maximized our two days in Cappadocia, famed for its rock-cut Byzantine churches and bizarre landscapes studded with sculpted conical outcroppings called “fairy chimneys.” She recommended that both days we have a taxi driver take us to points of interest rather than commercial tours that would include shopping stops and leave us unsatisfied. Nil even wrote down itinerary details that we could refer while on excursions. In prior email correspondence she had offered to reserve our space on airport shuttles between Nevsehir and Ürgüp, which took a burden off my mind. The Sota Cappadocia’s hospitality extended to the comfortable lounge/breakfast room, where we enjoyed an incredible spread to start our day and relaxed over drinks after touring.
In Kusadasi we could not have stayed at a more congenial place than Mr. Happy’s Liman Hotel, a budget nest right on the harbor. Owner Hasan Degirmenci hooked us up with a day tour to Ephesus and the Virgin Mary House and helped with minibus transfers from and to the Izmir airport, where our Turkish Airlines flights arrived late at night and took off super-early in the morning. (A special shout-out to the Izmir airport security guard who knew little English but took the trouble to help us find our shuttle ride after our midnight arrival.) When we announced to Mr. Happy that we were ready to settle our bill the last evening, he went into a happy dance (occupancy was low and he appreciated our business) and spread the joy by giving a discount for paying in U.S. cash. On arrival we’d been upgraded to a harborfront room at no extra cost by Omar, the affable guy who manned the front desk, made our breakfast in the rooftop restaurant and seemed to be on duty 24 hours a day. 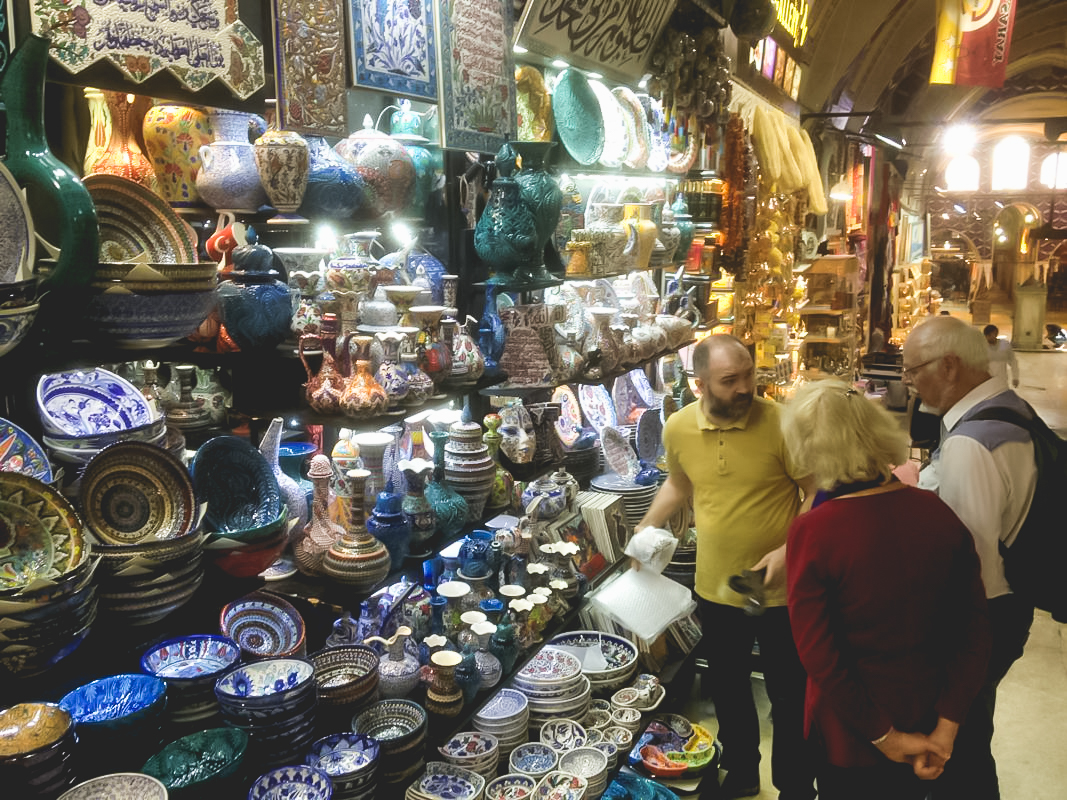 Entering a souvenir shop always brings out the Turks’ hospitable nature. I knew it was customary for shopkeepers to treat customers with a glass of tea, and we certainly got the tea treatment now and then. It was also fun talking with merchants about life in Turkey and answering their questions about America. They will ask about sports teams and the weather, and  often mention they have a relative living in Chicago or New Jersey.
Many shopkeepers, especially those in the carpet, jewelry and souvenir trades, can speak English fairly well. Restaurateurs and others who work with tourists also know the basics, but before my next trip to Turkey I want to invest some time in learning a few important Turkish phrases and greetings. It will be a small way that I can reciprocate for the goodwill that flows so naturally from the smiling, kind-hearted Turkish people. And next time I want to stay in Turkey two weeks, not one.