Atlantic City has a long list of attractions that celebrate the past and look to the future.

Hands down, Atlantic City, New Jersey is America’s most famous boardwalk. Just this past year The Travel Channel named it the “Best Beach Boardwalk.”

But Atlantic City didn’t earn that accolade for being the first boardwalk to open in 1870—though nostalgia plays a big factor— but rather for its ongoing commitment to innovation and cementing its position as one of the East Coast’s premier vacation destinations.

Indeed, Atlantic City is a place where the new and the old collide. One minute you will be spinning on a classic carousel eating salt water taffy and the next throwing your hands into the air on a brand new roller coaster. 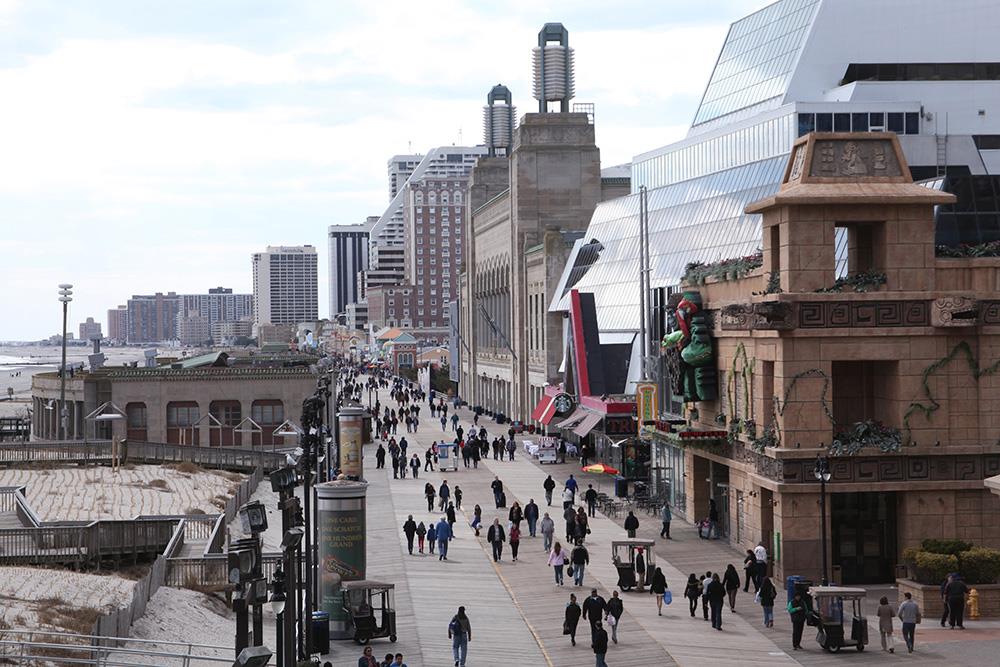 In the 1800s, Atlantic City became a coveted tourist destination for people looking to strike a balance between relaxation and fun. Things got even better for AC when the first boardwalk was built to stop tourists from tracking evidence of their sandy beach day into hotels, as these pragmatic promenades were transformed into a stretch of amusements, and the legend of Atlantic City was born.

Salt water taffy was born in AC in 1883 after a storm flooded a candy shop. The salt-soaked taffy caught the attention of a young girl and the rest is history. A pound of the scrumptious treat remains the area’s most prized souvenir, and James’ Candy and Fralinger’s Salt Water Taffy is the place to get it. The shop still uses the original recipes and offers tours to see the confection made.

Two of Atlantic City’s largest and most visible attractions features are the Absecon Lighthouse and Lucy the Elephant. Absecon, built in 1857, is one of the oldest lighthouses in America. Climb the 228 steps for unparalleled views of the ocean and Atlantic City skyline. Lucy the Elephant was erected in 1881 to attract potential buyers to a real estate developer’s land holdings. After a hotel, the Elephant Hotel, was built around Lucy, presidents, celebrities and royalty flocked to climb up and sit on Lucy’s howdah. You too can climb the six stories up to Lucy’s back. 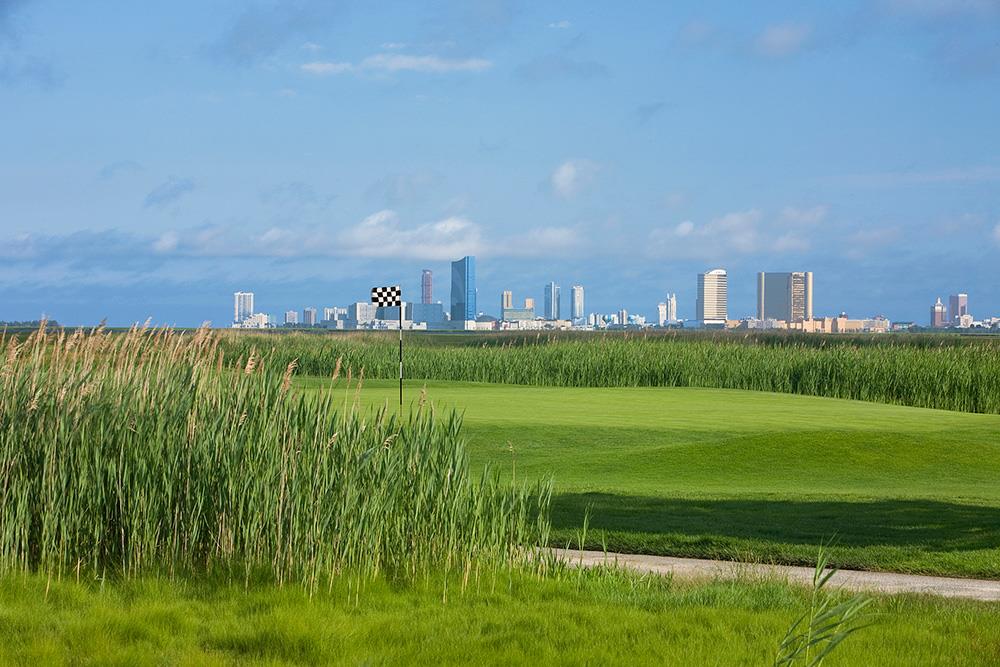 For more history, head south of Cape May and visit Historic Cold Spring Village, a complex of 26 restored historic 19thcentury buildings on 30 shaded acres. Tour the grounds, pet farm animals, take a free carriage ride and watch demonstrations of blacksmithing, basket weaving, and bookbinding to learn about the Jersey coast’s  past.

Even transportation in Atlantic City remains classic. Get around and take in the sea breeze the way the wealthiest vacationers used to–by rolling chair. These chairs were introduced in 1887 and used to be the only vehicle permitted on the boardwalk. If you need to get a little farther, hop on an authentic Great American Trolley that gives tours to all the best attractions and provides transportation for groups. Perhaps the most exciting way to see Atlantic City is with Red Baron Tours. Head up into the skies in an authentic 1940 WACO UPF-7 for an aerobatic adventure or sightseeing tour. Wearing your goggles and helmet, you will feel straight out of the golden age of aviation.

Last but not least, a trip to the coast wouldn’t be complete without seafood. Dock’s Oyster House, owned and operated by the Dougherty family since 1897, serves seafood and steak with an award-winning wine list, a raw bar and a piano bar. 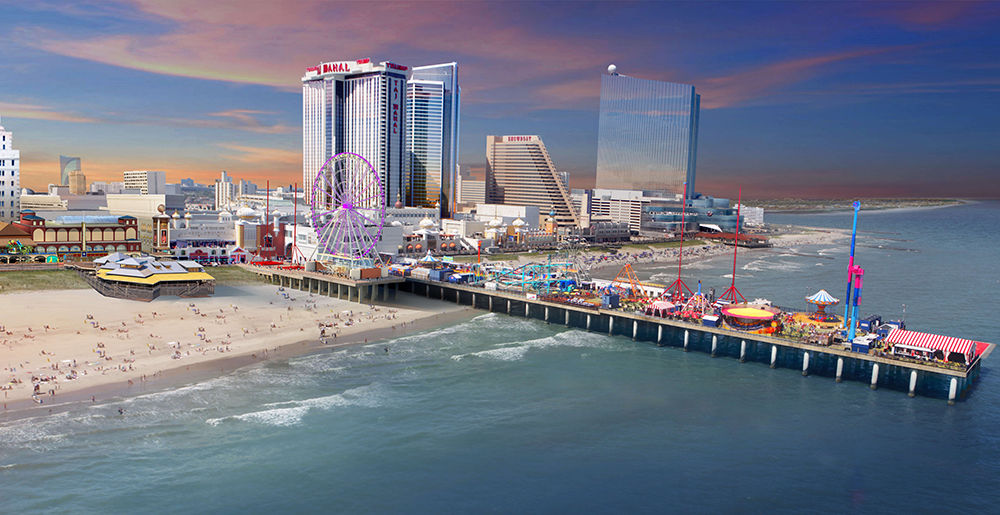 Steel Pier, a boardwalk staple, recently got some major upgrades with a $102-million renovation that brought 15 high-tech, extreme rides and will soon have a 200-foot observation wheel with 42 heated and air-conditioned gondolas so you can get the best view of Atlantic City year round.

Take the fun into the night at one of the dozens of casinos that line the shore. Big names such as the Trump Taj Mahal, Caesars and Revel mean lose slots, headliner entertainment and a party that lasts from dusk to dawn. The Music Hall at the Showboat is ranked as the #1 House of Blues venue and has hosted A-list artists such as Sean “P. Diddy” Combs, Korn, Lady Gaga and Guns N’ Roses.

Relaxation in Atlantic City also goes above and beyond the expected. At Exhale Spa in Revel you will enter a shrine of well being that includes a dedicated mind-body studio and gym. At Qua Baths and Spa at Caesars soak in the therapeutic waters with unique healing properties.

Atlantic City also appeals to the sports enthusiast. Within a 30-minute drive are over 20 championship-caliber golf courses. At New Jersey Motorsports Park you can watch world-class racers zoom by, or get behind the wheel and race other members of your group to the finish line.

Coming in spring 2015, the $18-million, 86,000-square-foot Bass Pro Shops Outdoor World will open. The four-city block complex will not only feature gear for outdoorsmen shopping, but an exquisite aquarium with native species and fish-themed bowling lanes—your shopping experience just got a whole lot cooler. 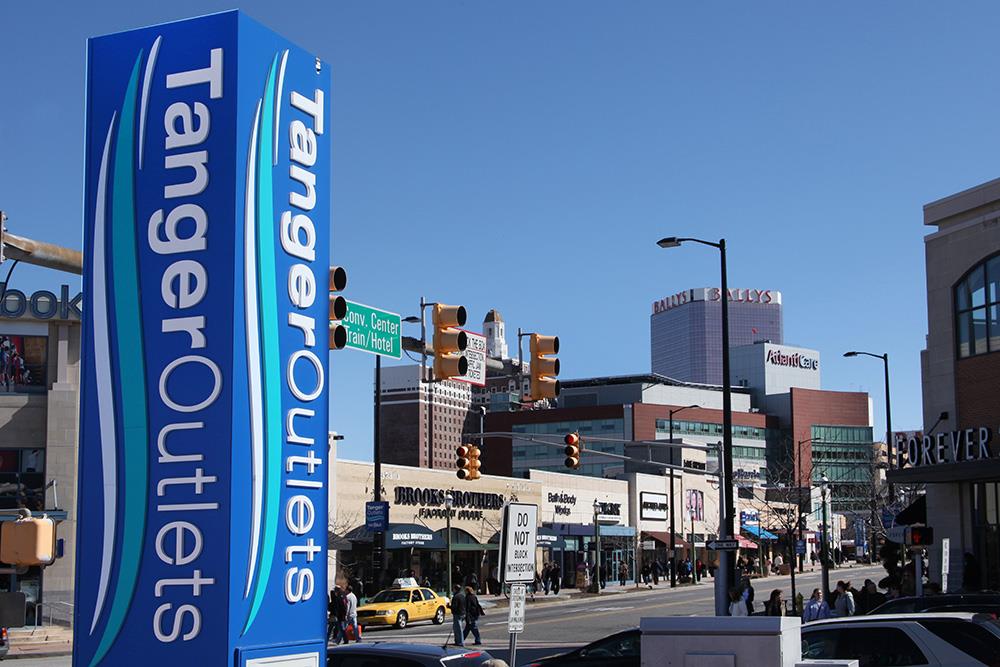 Speaking of shopping, the choices are endless at Tanger Outlets The Walk and The Pier Shops at Caesars, both featuring all of the hottest brands and designers. And don’t miss The Quarter at Tropicana, with 30 shops clustered on three levels along Old Havana-inspired streetscapes. Watch newly released films on a five-story screen with 12000 watts of surround sound at IMAX Theatre at Tropicana. It is the movie theatre on steroids.

Art tells a lot about an area’s culture, and the Noyes Art Garage of Stockton College certainly says a lot about the art scene in Atlantic City. It is the cornerstone in the new arts district and features 15 artist studios, galleries, shops, a cafe and a classroom studio.

Atlantic City is ahead of the rest of the state in sustainable energy and is home to its first commercial wind farm. Tour the facility to learn about the efforts to produce clean and sustainable energy with these 380-foot turbines. Your group will have the rare opportunity to stand directly next to one of them.

Atlantic City is within easy driving distance of Philadelphia, New York City and Washington, D.C. And with new United Airlines service, it’s now easy to reach from Chicago and Houston.

Atlantic City celebrates the past, looks to the future and never stops surprising.