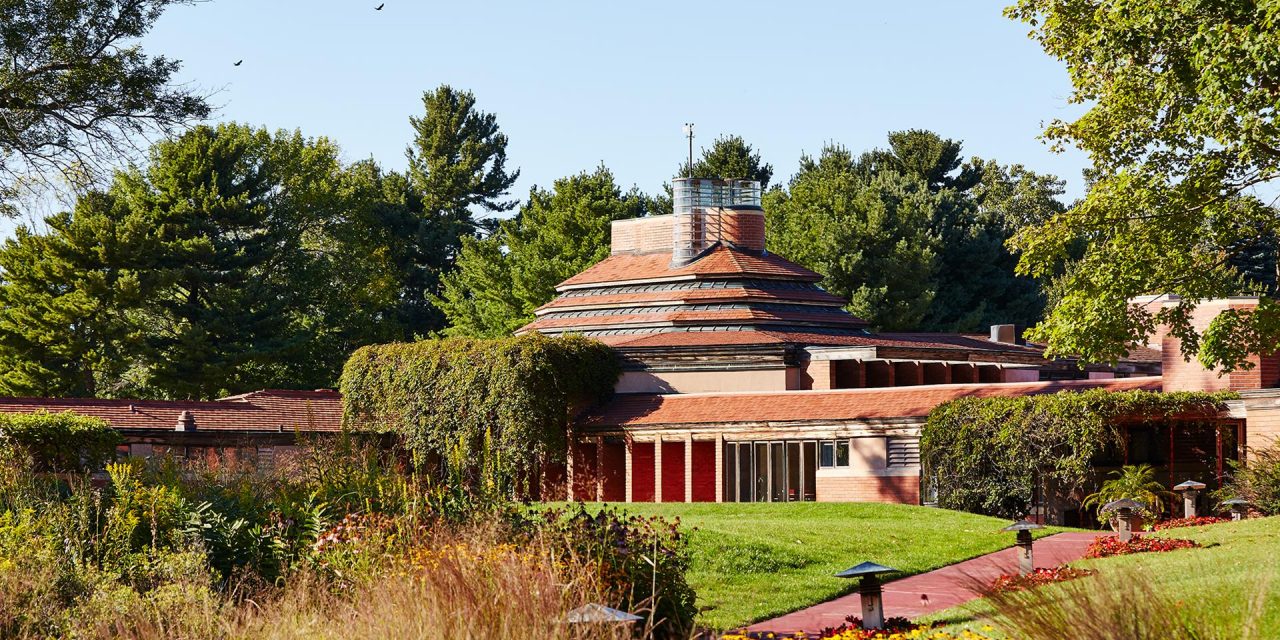 From Racine and Milwaukee to the shores of Lake Superior, a little name-dropping will add pizazz to your next itinerary

They made their marks in industry, the arts, sports and politics. And happily for groups touring Wisconsin, some of that fortune and fame may rub off on visits to museums and other attractions associated with famous names like Wright, Lombardi, Houdini and Pabst. Some of these sites are nationally known, while others are a bit off the radar. But all provide insights into the careers and personal lives of those who excelled in their chosen fields. 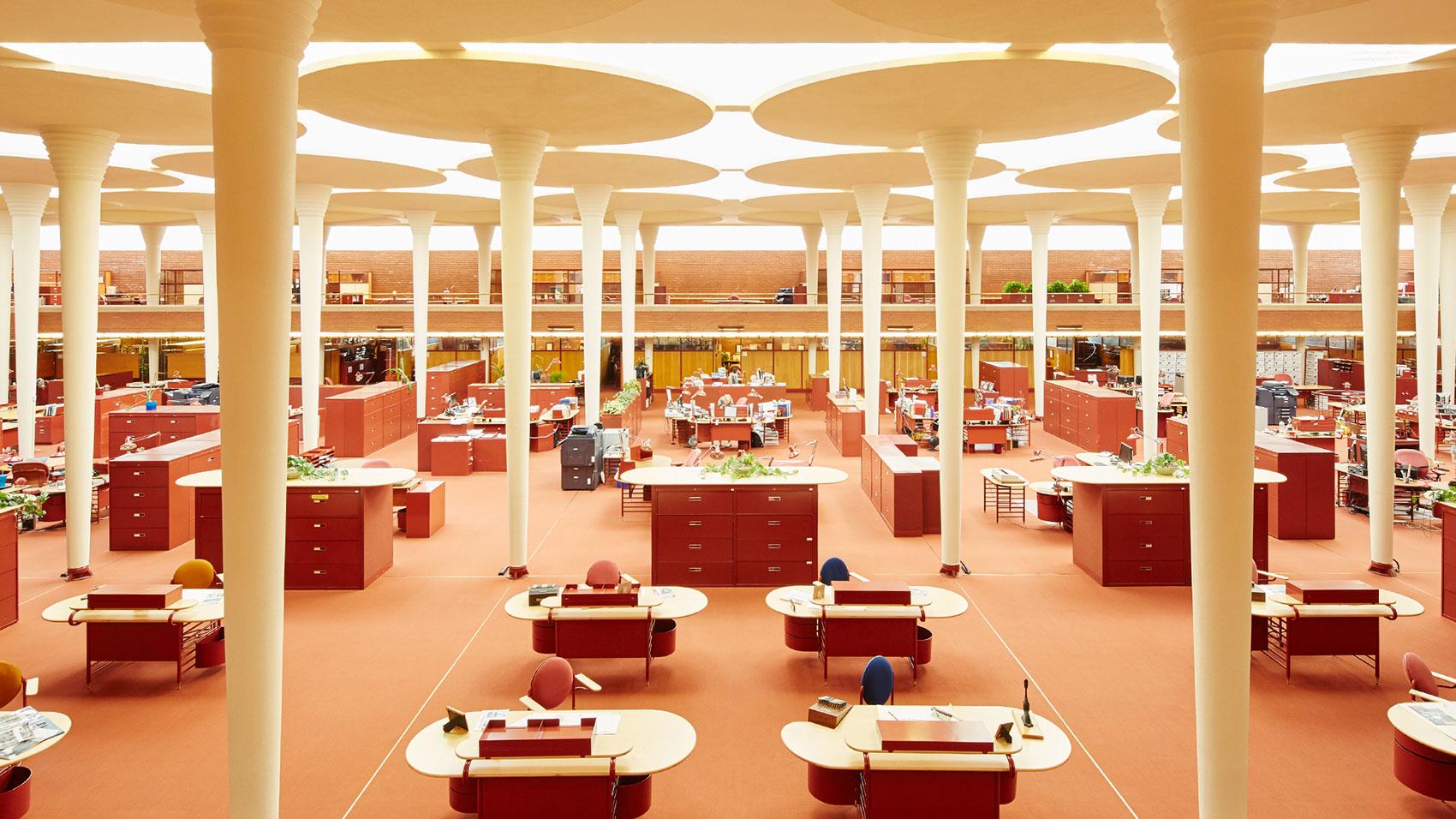 Wisconsin-born Frank Lloyd Wright, widely regarded as America’s greatest architect, designed several public buildings and private homes in southern Wisconsin that are open for tours. Wright fans flock to Racine, where free tours showcase the SC Johnson Administration Building and Research Tower, the architect’s largest commercial project. The 15-level Research Tower, distinguished by alternating bands of brickwork and glass tubing, housed labs that developed products like Pledge, Raid and Glade. At the Great Workroom in the three-level Administration Building, visitors see employees busy at their desks. Supporting the 31-foot-high ceiling are 62 concrete dendriform columns, which rise from nine-inch bases to become 18½-foot-wide “lily pads” at the top; they’ve been compared to golf tees, trees and mushrooms. You can sit at a Wright-designed desk with rounded corners and swivel drawers.

Wright also designed Wingspread, the last and largest of his Prairie-style homes, for H. F. Johnson Jr. Located in the village of Wind Point (just north of Racine), the 1937 residence is now a conference center operated by the Johnson Foundation of Wingspread. Free tours are available. Available for tours in Two Rivers is the 1940 Wright-designed Bernard Schwartz House, known as Still Bend. 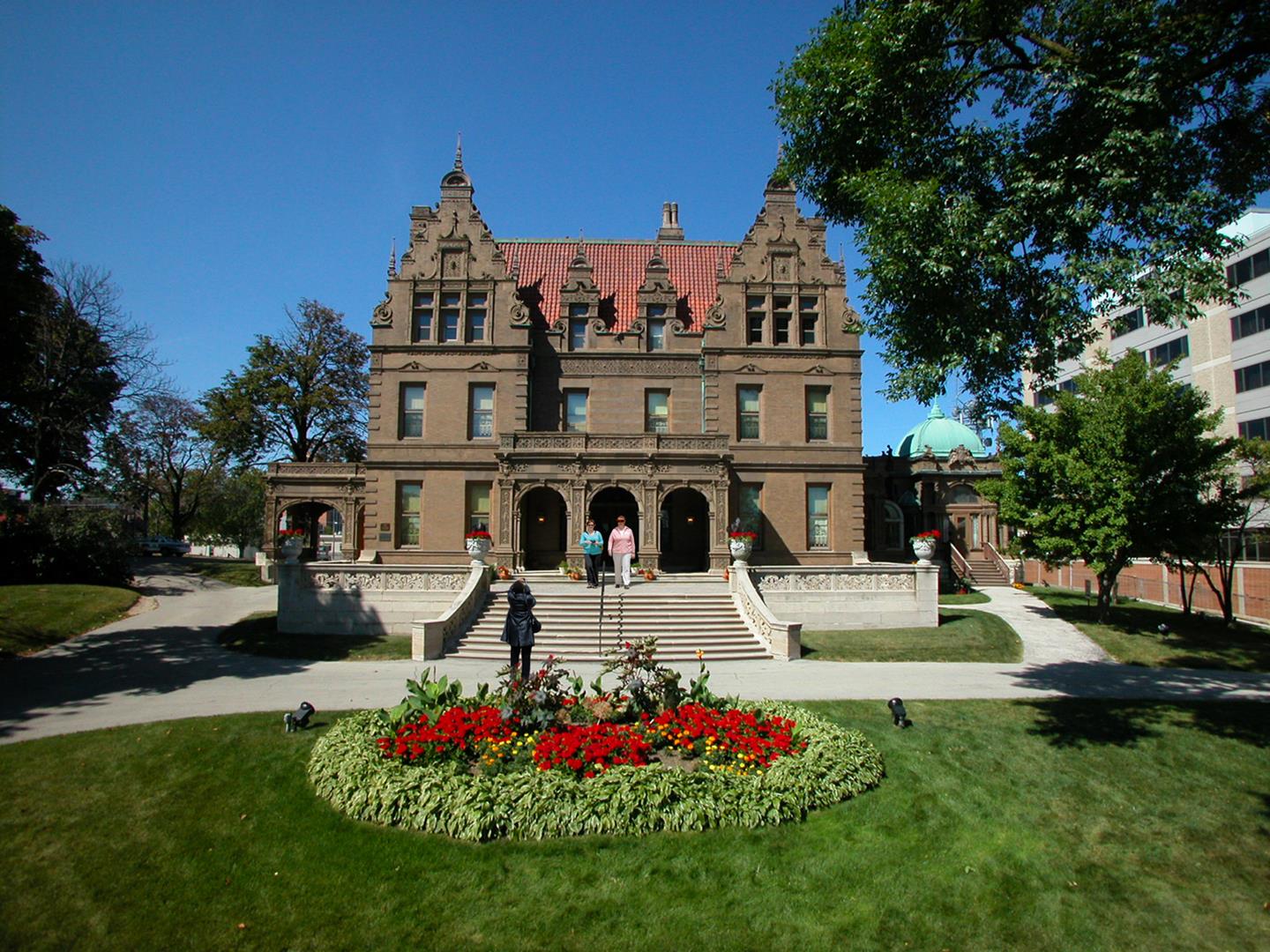 Beer barons greatly influenced the culture of early Milwaukee, and no one was more prominent than Captain Frederick Pabst, founder of a brewing empire that bore his name. When he died in 1905, he was one of the five richest men in the world. His wealth is reflected in Milwaukee’s Pabst Mansion, a Gilded Age jewel on Wisconsin Avenue, near Marquette University. With 37 rooms and 12 baths, the Flemish Renaissance Revival home, built in 1892, astounds visitors with its artwork, ironwork and ornately carved woodwork, not to mention the wall coverings, stained glass and lavish furnishings.

For insights into the history of an important Milwaukee community, visit the Jewish Museum Milwaukee, which covers early immigration, the American Jewish experience, the Holocaust, founding of Israel and other topics. You will find that Golda Meir immigrated to Milwaukee with her family as a child and went on to become the fourth prime minister of Israel. The elementary school she attended is named after her, and the Golda Meir Library is at the University of Wisconsin-Milwaukee, where she studied teaching. 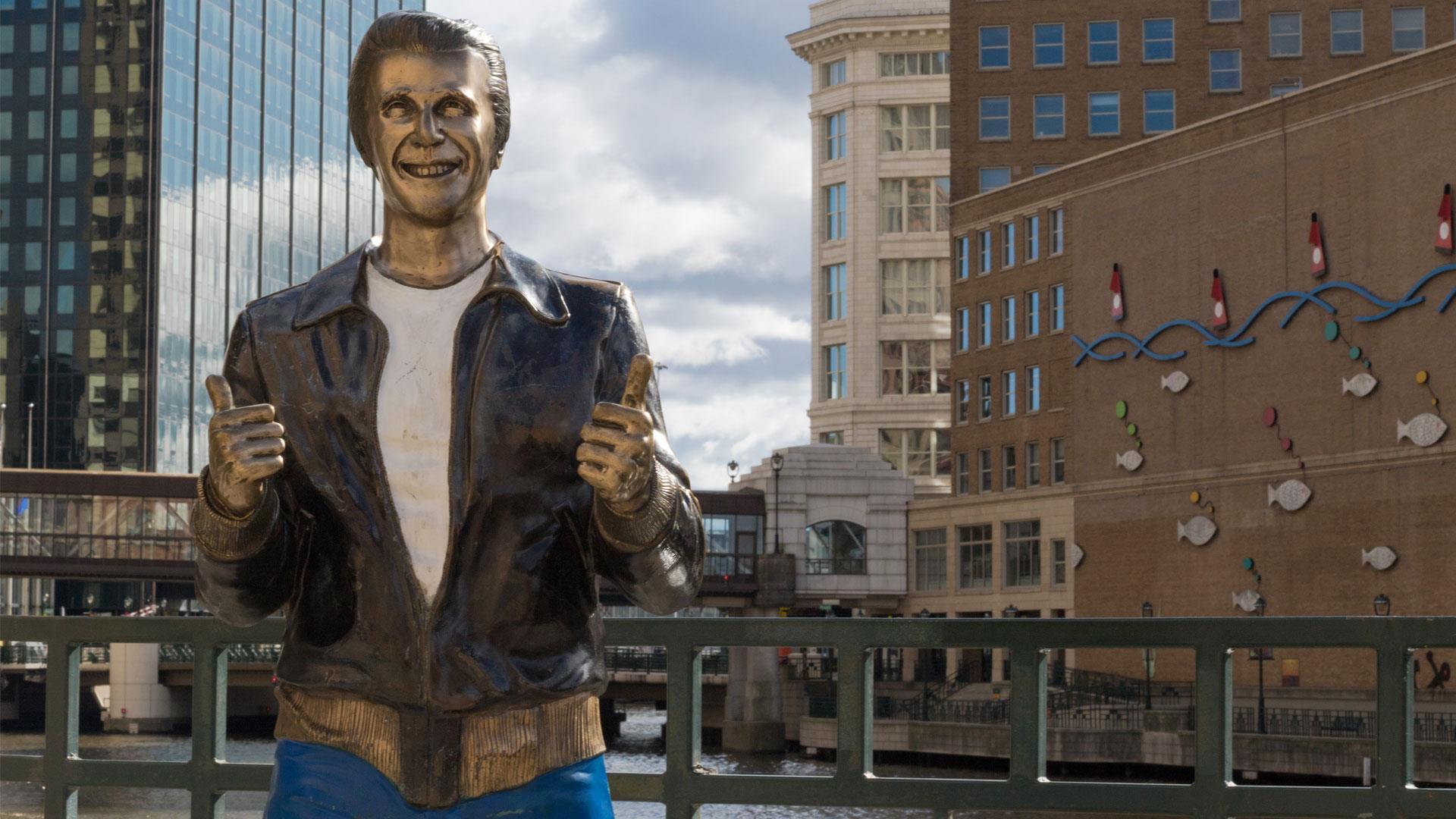 One of Milwaukee’s best photo ops is the Bronze Fonz, a must-visit selfie spot. The statue on downtown’s Milwaukee Riverwalk depicts actor Henry Winkler as “Fonzie” or “The Fonz,” a character named Arthur Fonzarelli in the 1970s TV sitcom Happy Days, which was set in 1950s Milwaukee. Unveiled in 2008, the pop art favorite shows The Fonz clad in leather jacket and jeans and flashing his trademark double thumbs up.

At Discovery World Science and Technology Museum in Milwaukee, music-minded visitors will want to explore Les Paul’s House of Sound, named for the Waukesha native who is credited with inventing the solid-body electric guitar and with his wife Mary Ford sold millions of records in the 1950s. You can immerse yourself in his music and get to know the innovations he introduced, plus create your own sounds and have your picture taken with Les in the virtual photo booth. 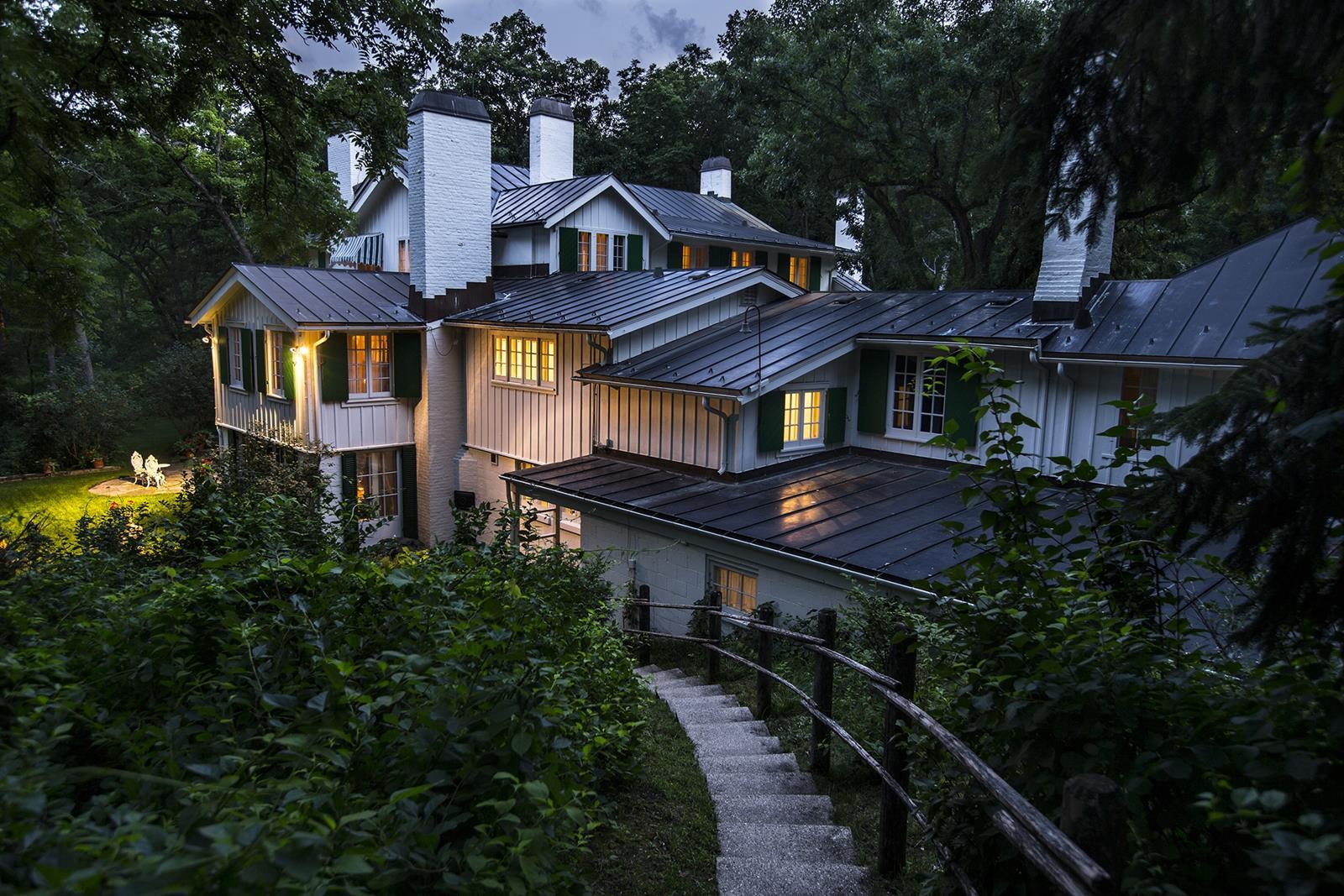 Thirty miles from Milwaukee, in the rolling hills near Genesee Depot, is Ten Chimneys, the estate of Alfred Lunt and Lynne Fontanne, the premier acting team in the English-speaking theater world from the 1920s until their retirement in 1960. Known as “The Lunts,” they graced stages on Broadway and around the globe. The romance of an earlier era permeates the elegant, three-story Main House, which displays the couple’s personal effects, including original furnishings, art work, photographs and gifts from fellow actors. There really are 10 chimneys—the Main House has six, the quaint country Cottage three and the rustic Studio (used for artistic creation) one. Estate tours include the three buildings and restored gardens. Boxed lunches can be arranged for groups.

On the shores of Lake Monona in Madison, the Otis Redding Memorial Plaque recalls the tragic crash of a twin-engine plane carrying a 26-year-old soul singer on the brink of superstardom. En route to a Madison engagement, Redding, along with four band members, an assistant and the pilot, perished in the lake. The young talent was best known for his hit single “(Sittin’ On) the Dock of the Bay.”

Appleton’s History Museum at the Castle remembers renowned magician Harry Houdini. Born Ehrich Weiss in Budapest, Hungary in 1874, he lived in Appleton for four years as a child. On display are photos, video and artifacts used by the escape artist himself. In interactive exhibits, visitors have a chance to learn and perform some of his iconic illusions and even escape from “jail.” The museum can arrange a 1½-hour walking tour of Houdini-related sites, including where his storefront apartment once stood and the synagogue where his father was a rabbi. A 45-minute bus tour with step-on guide also can be arranged. 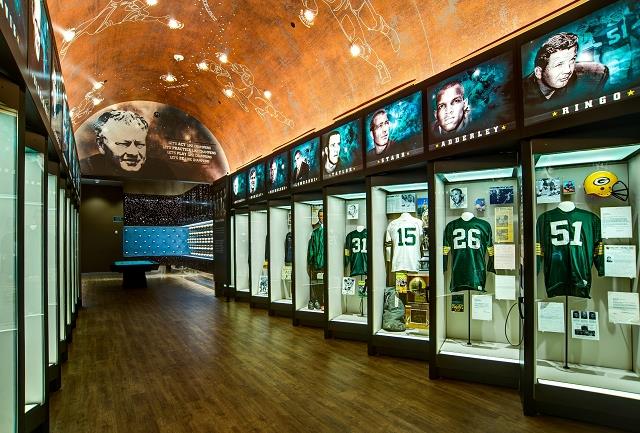 The Green Bay Packers Hall of Fame, housed in the atrium of Green Bay’s Lambeau Field, pays tribute to some of the best players and teams ever to grace the gridiron. Besides honoring legendary quarterbacks like Bart Starr and Brett Favre, it also enshrines Coach Vince Lombardi; a replica of his office is on display, and outside the atrium stands a 14-foot-tall statue of the man who led the Packers to three NFL championships and victories in Super Bowls I and II. Visitors can hear Packers legends describe historic games in their own words, view trophies from 13 world championships and scroll through touch screens to click on game video clips. Groups might want to arrange a stadium tour and have lunch at the 1919 Kitchen & Tap, which is just across from the Hall of Fame. 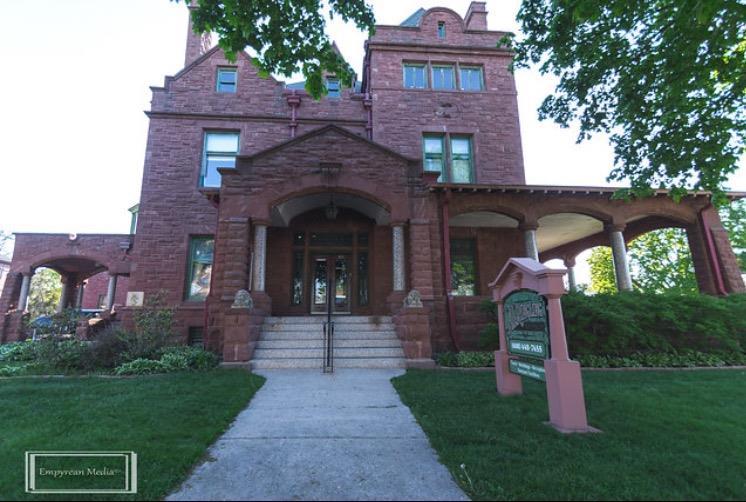 Baraboo, the hometown of the Ringling Brothers, was the winter headquarters of their famed circus from 1884-1918 and contains several Ringling-related attractions. Circus World Museum offers exhibits of circus memorabilia (including the world’s largest collection of circus wagons), a giant-screen theater and traditional Big Top performances in summer. Baraboo’s Big Top Parade, an annual extravaganza, will bring joy to downtown streets July 20, 2019. Also in town are the 1905 Al. Ringling Mansion, the opulent red-stone home of the eldest brother, and the beautifully restored 1915 Al. Ringling Theatre, a venue for live shows and films.

Richard I. Bong Veterans Historical Center in Superior salutes World War II’s “Ace of Aces,” a Wisconsin farm boy who grew up to become a decorated pilot and Congressional Medal of Honor recipient. On more than 200 missions in the South Pacific, Major Bong, a native of nearby Poplar, shot down 40 enemy planes—the most of any U.S. pilot before or since. Against the backdrop of Lake Superior, visitors can stand on a re-created Pacific atoll with palms, thatched huts and machine-gun turrets. The museum’s centerpiece is a restored Lockheed P-38 Lightning, the kind of plane Bong flew (his was named for his wife, Marge). Movies and artifacts remember not only Bong’s accomplishments but heroes from all branches of the Armed Services who served in the Korean, Vietnam and Cold War as well as WWII. Sadly, Bong died at age 24 in a test-flight crash in California just before the war ended. He is buried in Poplar.

Another aviator is honored at the Deke Slayton Memorial Space & Bicycle Museum in Sparta. Slayton, a Sparta native, was one of the country’s Mercury 7—the first group of astronauts formed by NASA in 1959. In 1975 he was part of the crew for the US/Russian Apollo-Soyuz docking mission, the first international space mission of its kind. Space memorabilia includes artifacts from Slayton and a piece of moon rock on loan from NASA. Displayed are model planes, a real 1932 plane and more than 100 bicycles.

Other notable Wisconsinites who have made an impact on the arts, entertainment and politics in the U.S. and globally include renowned artist Georgia O’Keeffe, born and raised in Sun Prairie;  the flamboyant Liberace, from West Allis; and one of the leaders of the women’s suffrage movement, Carrie Chapman Catt, who hails from Ripon. The Rahr West Art Museum in Manitowoc has O’Keeffe’s 1924 Virgin Pine Tree No. 2.

From the Broadway stage to the gridiron to realms out of this world, many talented people with Wisconsin connections have made notable contributions to society at large. Their accomplishments are on full display at attractions throughout the state.