When the modern day cruise industry firmly took hold in the 1980s, cruise lines wanted to make cruising more affordable, began targeting the middle class and wiped out the “class system” onboard. This had been a hallmark of the “olden days” of cruising going back in the 1930s, when the only way to cross the Atlantic was via ship, and what you paid tied into not just the accommodations but which shipboard areas you were allowed to use.

Today ships are purpose-built and with the wider array of cruise guests and multi-generational cruisers, cruise lines are now adding some areas that are more exclusive. Hence, the “ship within the ship.” What this means for groups? It’s another way to develop a group around a particular area, preference or need. 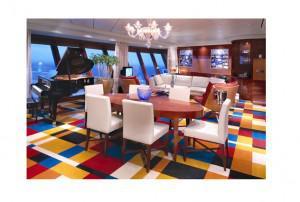 Norwegian Cruise Lines launched a new concept with its Garden Villas, first introduced onboard the Norwegian Jewel in 2005, followed by Norwegian Gem, Norwegian Pearl, Norwegian Dawn, Norwegian Star, Norwegian Jade, and of  course, Norwegian Epic, which debuted in 2010.  The Garden Villas provide more than 6,000 square feet of private living space, complete with a private terrace and dining area, butler service and numerous other amenities. There is a living room area with baby grand piano, a separate dining room and three bedrooms along with three luxury bathrooms. Guests have access to the exclusive Courtyard area, which has a private pool, hot tub, lounges, fitness area and sun deck. 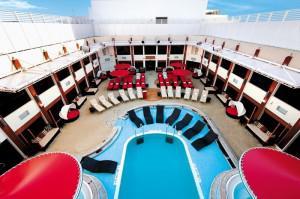 A new category of staterooms, an industry first and onboard the Norwegian Epic, are the “solo” staterooms, called “Studios.” These single occupancy staterooms have an urban flavor appeal, with a private keycard access to the complex, which includes the Studio Lounge, an ideal place to meet neighbors, have a drink or just relax. Once again, groups can also reserve accommodations in the Studios.

A New Level of Luxury

MSC Cruises has taken this a step forward with the MSC Yacht Club, which first debuted on the MSC Fantasia in 2008, and then onboard the MSC Splendida. When the MSC Divina launches in 2012, she will also have this “ship within the ship” area as well. Within the MSC Yacht Club are 71 suites (two are wheelchair- accessible balcony suites) and guests who reserve these are provided with more than just extra amenities. For instance, there are exclusive areas – The One Pool includes not only a swimming pool but two spa baths and a solarium. There is also a bar area, called The One Bar, and The Top Sail Lounge, which is a panoramic lounge providing plasma screen monitors to follow the ship’s course.

Besides these exclusive areas, guests have access to a 24-hour concierge, private butler service is included (one for every five suites),  guests receive complimentary dining at the specialty restaurants (advance reservations are  needed), and complimentary beverages (wine, soda, spirits, etc.) are also available in the ship’s main dining room as well as the MSC Yacht Club cafes and bars. More amenities are included as well.

Richard Sasso, president & CEO of MSC Cruises, comments, “MSC Yacht Club is the buzz of the industry. It’s the ship-within-a-ship executed to the highest level. Private, exclusive, luxurious and secluded within a magnificent vessel that has every imaginable amenity to provide the best of both worlds in cruising.”

The Spa Sanctuary and Stateroom Concept

Health clubs onboard cruise ships have not only evolved into spa sanctuaries, but with it, now cruise lines have included special staterooms adjacent to the ship’s spa. The first cruise line to launch this concept was Costa Cruises, onboard its Costa Concordia in 2006. 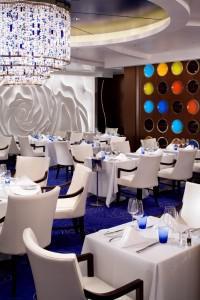 Since then other cruise lines have embraced this concept, including Carnival Cruise Lines with its Cloud 9 Spa (launched onboard the Carnival Splendor in 2008).

And when Celebrity Cruises launched the Celebrity Solstice in late 2008, it included numerous industry firsts. One was the new AquaClass category of staterooms centered around the Aqua Spa, with another innovative feature – the exclusive specialty restaurant, Blu, which showcases new healthy yet savory cuisine. Guests who reserve the AquaClass staterooms are given priority seating in Blu. Since then, the other Solstice class ships that have been launched also include the AquaClass staterooms. And when the Celebrity Reflection debuts in 2012, she will feature the line’s first AquaClass Suites. These suites will also be provided with 24/7 butler service – this is a standard feature provided to guests reserving suites throughout the other ships in the Celebrity fleet.

If your group wants to have more of a spa retreat focus, these spa staterooms and suites provide a great option.

One of Disney Cruise Line’s strengths has always been to provide designated adult areas onboard its ships in addition to ones for different age groups. “The District” is the adults-only paradise, complete with different themes and it comes alive in the evening. In addition, Disney Cruise Line has some dining options just for adults – the Disney Wonder and Disney Magic have Palo. The Disney Dream, which debuted earlier this year, not only has Palo but also Remy. (A surcharge does apply to dine at one of these alternative restaurants.)  Groups can pre-arrange in advance to dine at these.

Another nice plus is Castaway Cay, Disney Cruise Line’s private out island paradise. In addition to having a wide array of activities and beaches, Serenity Bay, which is located about a mile from the family beach, is exclusively just for adults. This pristine section of beach also has an adults-only lunch buffet, adults can enjoy a therapeutic massage at one of the nearby cabanas which overlook the ocean, and there are even premium rental cabanas that offer privacy and luxury that only a deluxe beach retreat would normally provide.

New Avenues for Your Group

Whether your group is seeking a spa escape or a luxury slant, looking into the “ship within the ship” possibility is a way to explore some new options than didn’t exist before.