Aside from its status as one of the nation’s most famous Civil War battlefields, little Gettysburg, Pa. (pop. 8,100) also offers some lessons from the World War II era. While Gettysburg National Military Park steals the thunder, groups with time to explore can hop on a shuttle bus from the park’s gleaming new visitor center for a short ride to another attraction operated by the National Park Service. 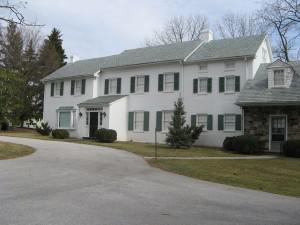 Purchased by Gen. and Mrs. Eisenhower in 1950 after a 30-year military career that took them around the world, the farm is the only home they ever owned. They expected it to be their retirement home. But after Ike was persuaded to be the Republican presidential candidate and got elected by a landslide in 1952, it became a second White House and was visited by such world leaders as Nikita Khruschchev and Winston Churchill. The rural retreat became a temporary command center during Ike’s recuperation from a heart attack.

Eisenhower, a Kansas farm boy, first lived in Gettysburg during World War I when he was in charge of the Army’s fledgling tank corps at Camp Colt. He went on to become Supreme Commander of Allied Forces in Europe during World War II, leading the Allies to victory against Nazi Germany. After his White House years, Ike kept an office at Gettysburg College.

A farm visit, mostly self-guided, takes at least an hour (two is better) and starts with a 15-minute park ranger orientation tour of the grounds and farm, followed by a short talk in the farmhouse’s formal living room. The room showcases gifts from heads of state, such as a black lacquer, mother-of-pearl coffee table from the president of South Korea and a silk Tabriz rug from the Shah of Iran.

The glassed-in porch, facing fields and trees on the east side of the house, was the Eisenhowers’ favorite room. Here Ike and Mamie watched TV, played cards with friends, visited with the grandchildren and ate on TV tray tables. Ike also met with distinguished guests on the comfortable porch and pursued his hobby of oil painting. Of the 260 works he did on the farm, several are displayed throughout the house.

In the backyard are a putting green (Ike was an avid golfer) and the brick barbecue patio where he grilled steaks from his show herd of prize-winning Black Angus cattle. Corn, vegetables and cattle are still raised on this working farm. 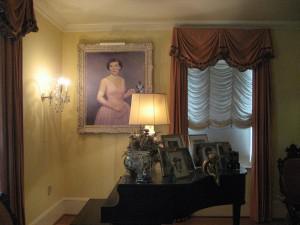 A portrait of Mamie Eisenhower graces the living room of the farmhouse. Photo Credit: Gettsyburg CVB

The farmhouse, remodeled by the Eisenhowers over several years, looks pretty much as they left it. Mamie’s makeup and perfume is still on the table in her dressing room, her night gown draped over the chair. After Ike died in 1969, she always kept books, stationery and candy on his side of the bed so it would not seem empty. Mamie died 10 years later. The kitchen, with its Crosley refrigerator and linoleum counters, reflects the ’50s style more than any other room.

A look around the grounds reveals the cattle barn and a skeet range where an exhibit explains Eisenhower’s prowess in the shooting sport. A garage contains the Eisenhowers’ golf carts, a presidential limousine, a 1965 Buick station wagon and a “Surrey with the Fringe on Top” that was used to show visitors around the farm.

At the farm’s reception center, visitors can view a 10-minute video that capsulizes Eisenhower’s political and military career (shown in the barn during warmer months). He is shown being interviewed by CBS’ Walter Cronkite during retirement and at an American military cemetery near the D-Day invasion beaches in France. Artifacts on display at the reception center include one of his golf clubs (he got a hole-in-one at age 77), “I Like Ike” and other campaign buttons, and some of Mamie’s clothes.