The Peabody: A Memphis Landmark 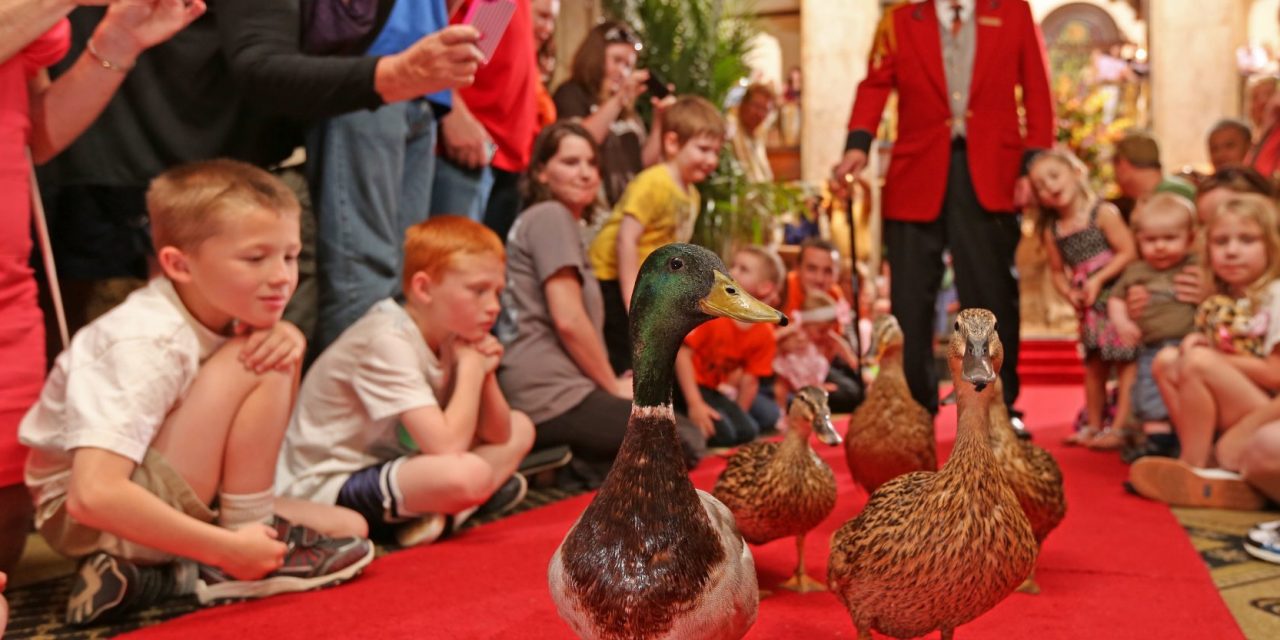 History, pageantry and architectural splendor accent one of the South’s truly grand hotels

For generations, The Peabody Memphis has been the place to stay for anyone who wants to tap into the vibe of this musically inclined city on the Mississippi. Conveniently located in the heart of downtown Memphis, the venerable hotel is just blocks from the riverfront and sizzling clubs of legendary Beale Street.

A National Historic Landmark famed for its elegance, pedigree and lobby fountain inhabited by live ducks, The Peabody is a destination in itself. While many important events have transpired there over the decades, it’s those ducks that have put The Peabody on the tourist map.

For a spectacle that has been staged daily for 89 years, people throng the hotel’s two-story Grand Lobby and lean over the mezzanine’s railings to watch five resident mallard ducks—one male and four females—march out of the brass-trimmed, wood-paneled elevator at 11 a.m. and walk single file down the regal red carpet to the Italian travertine marble fountain.

The famous Peabody Duck March is led most days by professional actor Kenon Walker, who goes by the title of Duckmaster. Wearing a red, ringmaster-style coat adorned with gold-braided epaulets, he officiates at the presentation, regaling onlookers with the story behind the quirky tradition. Come 5 p.m., the ceremony is repeated, again with great fanfare, and the feathered friends march back to the elevator and their penthouse home, a rooftop brick abode called the Duck Palace. At each march, someone from the audience is chosen as honorary Duckmaster and receives as gifts a rubber ducky for the tub and a cane topped with a brass duck head (just like the Duckmaster’s).

So, how did the tradition of ducks in the fountain begin? In 1933, Frank Schutt, the hotel’s general manager, and a friend returned from a hunting trip to Arkansas and thought it would be funny to put some of their live duck decoys (it was then legal for hunters to use live decoys) in the lobby fountain. Public reaction to the practical joke was enthusiastic, and the hotel has been associated with ducks ever since.

When Edward Pembroke, a former circus animal trainer, was hired as a bellman in 1940, he volunteered to care for the resident ducks and bring them to and from the lobby each day. He taught the birds to walk along a red carpet and incorporated march music into the ceremony, thereby inventing the Peabody Duck March and title of Duckmaster. Pembroke served in that role until his retirement in 1991.

Spectators can preserve their memories of the celebrity mascots by picking up a duck-related souvenir in the lobby gift shop. Merchandise ranges from duck socks, duck books and plush toys to the Blue Suede Duck, a rubber ducky with an Elvis Presley head.

In light of social distancing precautions being taken during the pandemic, the hotel at this time asks that only hotel guests and restaurant patrons attend the Duck March. Others are encouraged to come view the ducks splash around in the lobby from 12 to 4 p.m.

The Peabody Story: A Look Back

The Peabody Memphis traces its history back to 1869. Soon after opening at the corner of Main and Monroe, it became one of the South’s premier social centers, attracting everyone from riverboat gamblers to cotton traders. Each of the 75 rooms boasted a private bath, a luxury at the time. The rate for room and meals was $3 to $4 a day.

Financed by Colonel Robert C. Brinkley, the hotel originally was to be called The Brinkley House. But shortly before the grand opening, Brinkley received word of the death of his good friend, philanthropist George Peabody, and decided at the last minute to name the hotel in his honor. The property closed in 1923 to make way for a bigger and better Peabody that debuted two years later at its current location—Union Avenue at Second Street.

An impressive 12-story structure designed in Italian Renaissance Revival style, it opened in 1925 with 625 rooms and continued to be a social, business and nightlife hub. In the 1930s, ’40s and ’50s, the Skyway Ballroom’s supper club and dancehall hosted Big Bands led by the likes of Tommy Dorsey, Paul Whiteman, Harry James and Les Brown, and singers like the Andrew Sisters. The Skyway was one of three national live-broadcast sites for CBS Radio.

In the early 1970s, however, downtowns across the nation started experiencing economic declines, and Memphis was no exception. After multiple ownership changes and a brief stint as the Sheraton-Peabody, the hotel closed its doors in 1975, but it would not stay shuttered. Family-owned Belz Enterprises, a local real estate development and management firm, saved the Memphis icon from the wrecking ball and began a massive, multi-year renovation, restoring the landmark to its former grandeur. The Peabody reopened on September 1, 1981, marking the beginning of a downtown renaissance. It claims many loyal, long-time employees; three generations of a family working there at the same time is not unusual.

The hotel’s colorful history comes to life in the mezzanine’s Memorabilia Room. One learns, for example, that Elvis Presley, a Memphis boy, received the $4,500 signing bonus of his first national RCA recording contract at The Peabody on November 21, 1955. His manager, Colonel Tom Parker, was a guest of the hotel at the time and had the receipt typed on Peabody letterhead. Elvis also visited the hotel for his high school’s junior-senior prom, which was held in the Continental Ballroom in 1953.

Displayed on the mezzanine is a rosewood-encased grand piano custom built in 1838 for Francis Scott Key, the Maryland lawyer who wrote the lyrics for “The Star-Spangled Banner” during the War of 1812. The mezzanine is the best place to admire the stained glass of the lobby’s painted, coffered ceiling.

Exploration of the historic hotel also should include the open-air rooftop, which offers panoramic views of downtown Memphis and close-up looks look at the exterior of the Duck Palace and giant red neon “The Peabody” signs. On Thursday nights, April through August, the lofty space hosts a Rooftop Party with live music and beautiful sunsets.

The marble-columned lobby, its fountain festooned with a magnificent floral arrangement, is a fashionable place to meet for cocktails, whether there’s a duck parade or not. It’s been called “the living room of Memphis.” The $12 Rubber Ducky Cocktail (Malibu rum, crème de banana, pineapple juice and orange juice) comes with a mini rubber ducky. For $2 extra, any drink can be ordered with the floating keepsake.

Just as opulent as the lobby is adjacent Chez Philippe, a French restaurant with murals, crystal sconces, soaring Corinthian columns and other palatial touches. Though temporarily closed for dinner service, it does offer a traditional English afternoon tea (Wednesday through Sunday) with savory tea sandwiches, assorted sweets and warm scones from the Peabody pastry shop.

Duck, by the way, has not been served at any of the hotel’s restaurants since the reopening in 1981, when managing partner Gary Belz took issue with a menu proposed by the pre-opening executive chef. In an emphatic letter, Belz declared, “There will be no dead ducks at The Peabody.” (The restriction makes Chez Philippe the rare French restaurant that does not offer duck.)

Capriccio Grill is open for breakfast, lunch and dinner, and is known for its steaks, pasta and wood-fired pizzas. The Peabody Deli & Desserts, which serves pastries and sandwiches from 6:30 to 11:30 a.m., offers complimentary coffee, tea and hot chocolate for hotel guests.

A few years ago, The Peabody Memphis completed a renovation of all of its 464 guest rooms and suites. The multi-million-dollar project featured sparkling new bathrooms with upgraded lighting, white Carrara marble tiles on floors and tub surrounds, open shelving for storage and quartz vanity tops. Wall art pays tribute to Memphis, the blues, Mississippi River sunsets and the Peabody ducks.

I stayed in Room 1122, a spacious, high-ceilinged corner nest that sported an impressionistic painting of a male mallard duck in the entryway. Amenities in the walk-in closet included robes, slippers, an iron and ironing board, an umbrella and a safe. A 42-inch flat-screen television and executive desk and chairs are standard features. The level of luxury and pampering service has earned The Peabody Memphis AAA Four-Diamond and Forbes Four-Star ratings. The Peabody is a member of Historic Hotels of America.

A limited number of pet-friendly rooms are available. In consideration of the Peabody ducks, pets are not permitted inside the seating area of the lobby or along the red carpet during the Duck March.

For more information on The Peabody Memphis, visit www.peabodymemphis.com.

Memphis tourism information can be found at www.memphistravel.com.