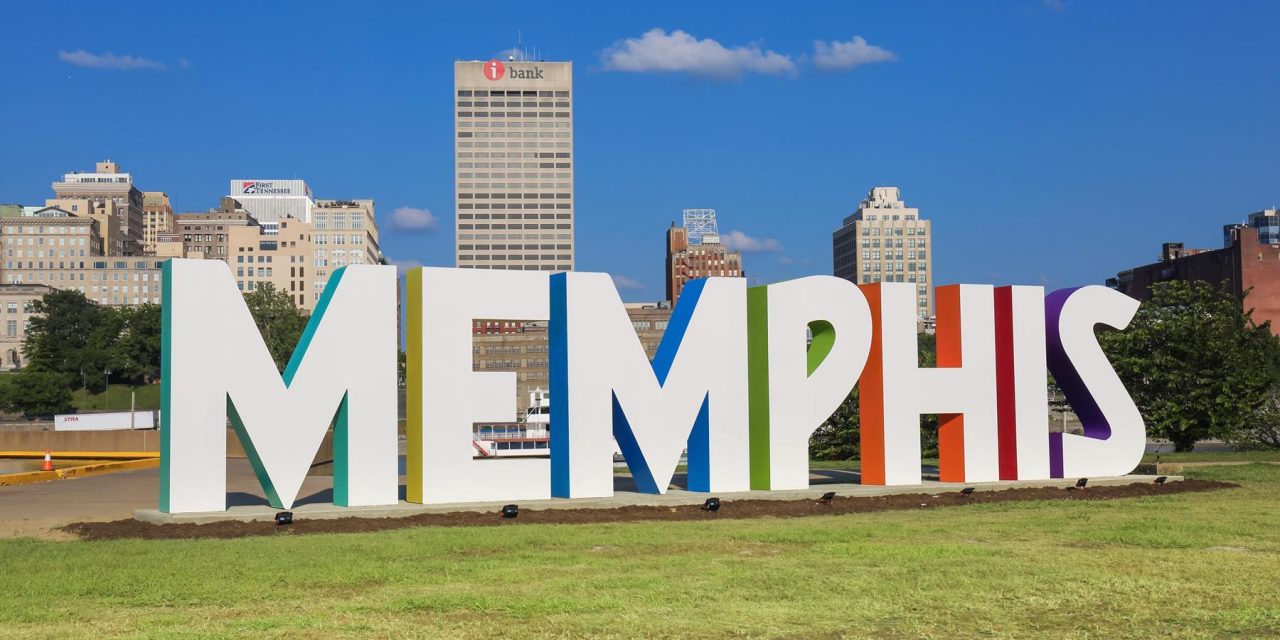 Visitors to downtown Memphis find plenty to see and do along the banks of the mighty Mississippi. The Memphis Pyramid dominates the bevy of shoreline treasures.

As anyone who has been to a Bass Pro Shops location knows, these mega-stores are cavernous and, with their giant aquariums, mounted animals and wilderness-inspired settings, qualify as attractions in themselves. The one in downtown Memphis, however, is even more imposing, even more of a destination.

That’s because this Bass Pro occupies the Memphis Pyramid, a monumental glass-and-steel eye-catcher that rests on the banks of the city’s most distinguishing natural feature—the Mississippi River. One of the largest pyramids in the world, the 321-foot-high structure captures the spirit of the city’s Egyptian namesake.

Built in 1991 as a sports and concert arena, the Pyramid hosted University of Memphis Tigers men’s basketball games, big-time boxing matches and famous musical acts. The NBA’s Memphis Grizzlies played there from 2001-2004, but because the stadium didn’t meet league standards, they switched to the newly built FedEx Forum, as did the Tigers. 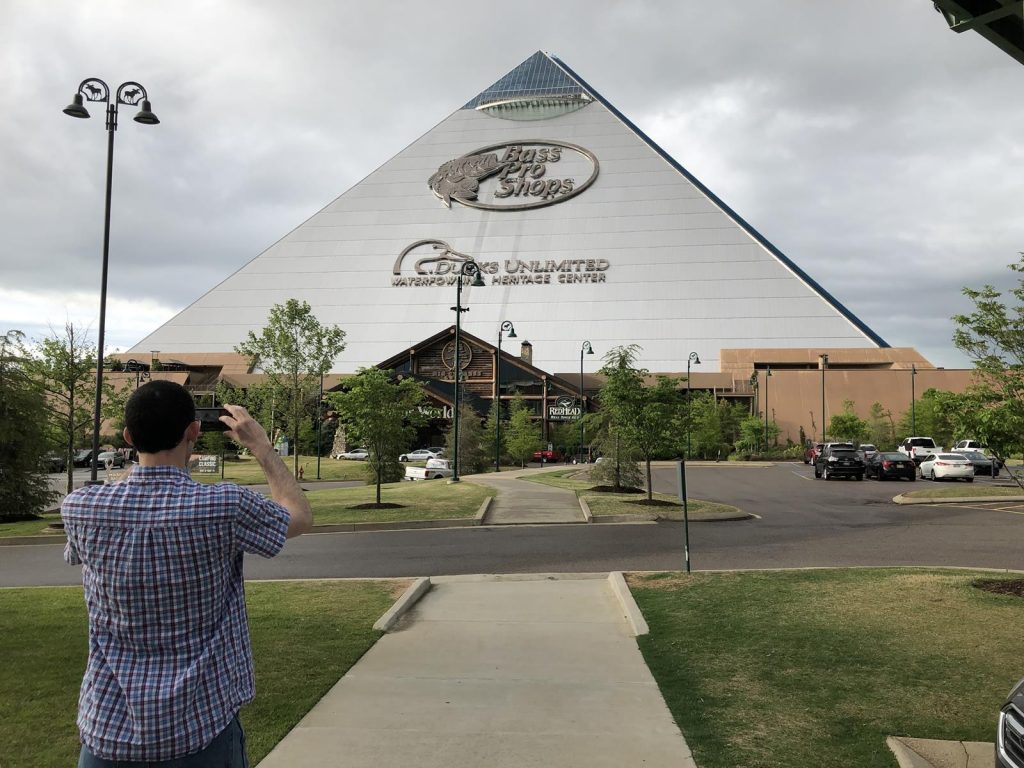 For over a decade, the Pyramid sat neglected until visionary Bass Pro Shops owner Johnny Morris had it converted into a faux cypress swamp sporting not only a sprawling store but an outdoors-themed hotel and a full-service rooftop eatery. The shopping/dining/lodging/sightseeing complex opened in 2015, giving the hulking atrium a second chance and turning it into a prime tourist attraction.

Twin glass elevators encased in steel girders, billed as the tallest freestanding elevators in America, take riders 28 stories to the top, where glass-floored observation decks at The Lookout at the Pyramid, a restaurant and bar, offer panoramic views of the river, Memphis skyline and Arkansas shore. Sunset is a popular time to come, and nightly light shows illuminate the iconic, double-hump Hernando DeSoto Bridge (Interstate 40) linking Tennessee and Arkansas.

A circular 10,000-gallon catfish aquarium commands the middle of the restaurant, which is open for lunch and dinner. Retractable window walls allow for open-air dining, weather permitting. 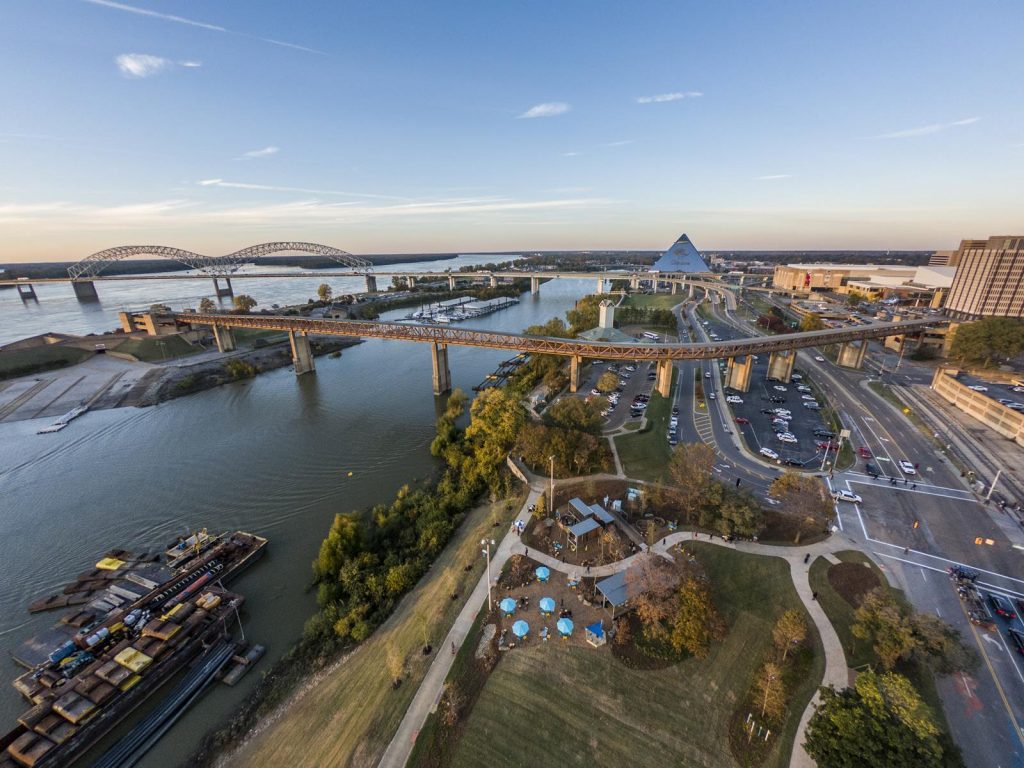 The menu lists Southern-style comfort dishes like fried catfish, fried chicken and blackened redfish with Creole butter sauce, plus steaks, seared scallops and other entrees. Burgers and sandwiches are served until 4:30 p.m. For starters, a real treat is the Wild Game Charcuterie board, an assortment featuring duck and venison sausage, Genoa salami, aged cheddar, pickles, and grilled baguette slices for spreading on pimento cheese, charred onion jam and whole-grain mustard.

The Pyramid’s downstairs casual restaurant, previously known as Uncle Buck’s Fishbowl & Grill, by late summer will be made into Wahlburgers Wild, whose menu will include wild game items. The 13-lane bowling center and aquarium bar will remain.

Shopping and Sleeping in the Swamp

Navigating the boardwalks through the “swamp” in the retail area, shoppers look up at towering pines and moss-draped cypress trees fashioned from concrete. The mock wetland has ponds inhabited by live ducks, fish and alligators.

Merchandise, like at any Bass Pro, ranges from fishing gear, camp stoves and camouflage wear to boats, bullets and birdhouses. The store, which covers the entire ground floor and part of the second, boasts the “largest assortment of waterfowl-related hunting equipment ever assembled.” Ducks Unlimited Waterfowling Heritage Center is an interactive, conservation-focused museum inside the complex, and group tours are available. 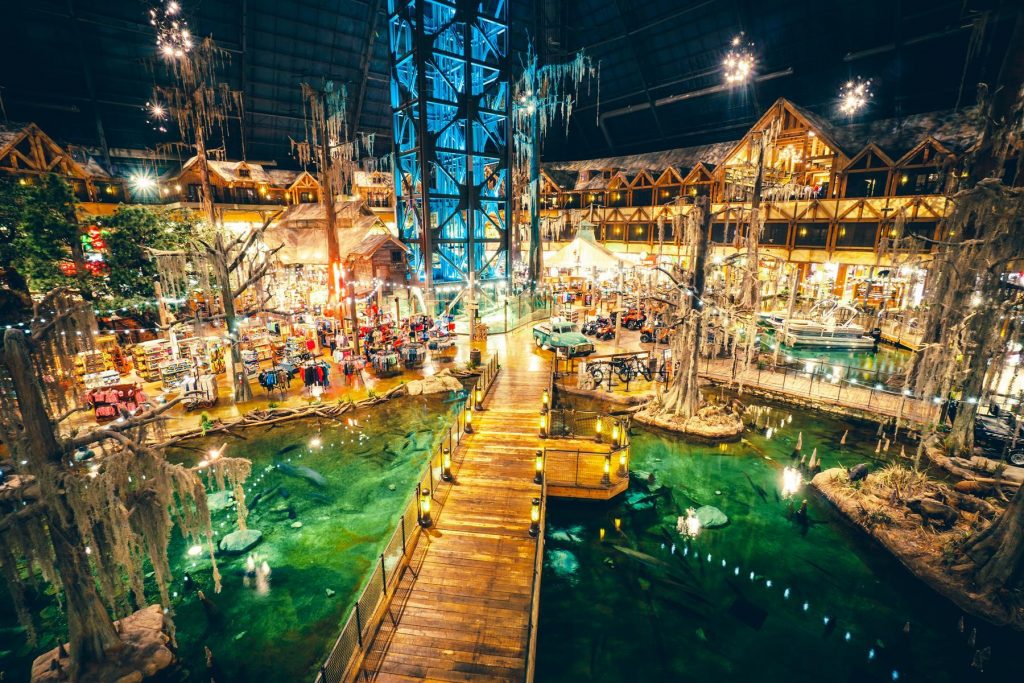 On two levels overlooking the swamp environment are the interior rooms of Big Cypress Lodge. They offer French doors that open to a private screened-in porch with rocking chairs. The hotel’s 103 rooms, some with exterior views, are designed to mimic vintage duck hunting cabins, fly fishing lodges or treehouse cabins. Facilities include a fitness center, spa and a bar that evokes a grand hunting lodge.

Other Ways to Take in the Riverscape

In addition to visiting Brass Pro Shops at the Pyramid, travelers have other fun ways to connect with the Memphis riverfront. From Beale Street Landing, for example, the Island Queen paddlewheeler departs for narrated 90-minute cruises filled with colorful tidbits about local history and river commerce.

Your guide talks about the stones making up the levees, points out bridges and cargo-hauling barges, and reveals that the first Holiday Inn was built in Memphis in 1952. He also discusses the 1865 explosion of the steamboat Sultana, a disaster near Memphis that killed 1,800 men and ranks as the worst maritime accident in U.S. history. 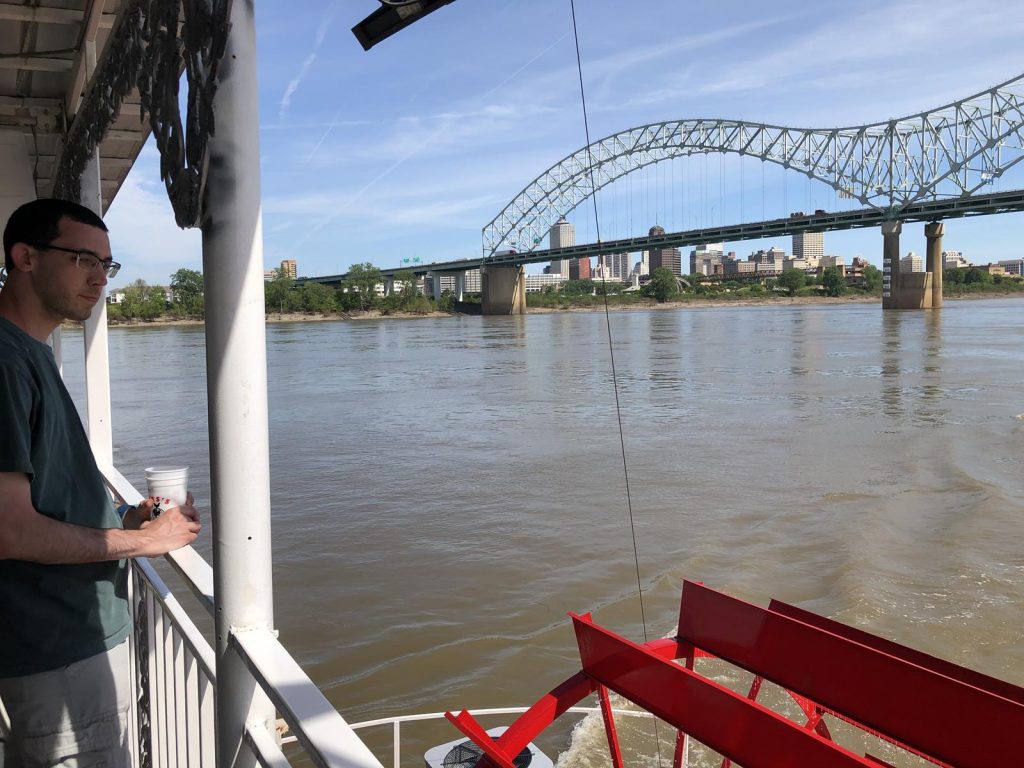 Riverboat passengers also get a close look at Mud Island Park, a greenspace located on a peninsula just offshore. It’s a 10-minute walk from downtown via a covered footbridge; the park’s monorail no longer operates. Once at the park, visitors can catch skyline views, walk the paths, and read interpretive panels about the Mississippi River. On a grassy field, the sign spelling out MEMPHIS in bold capital letters makes the perfect photo op. As of this writing, the park’s amphitheater and a museum showcasing the natural and cultural history of the Lower Mississippi River Valley were closed. 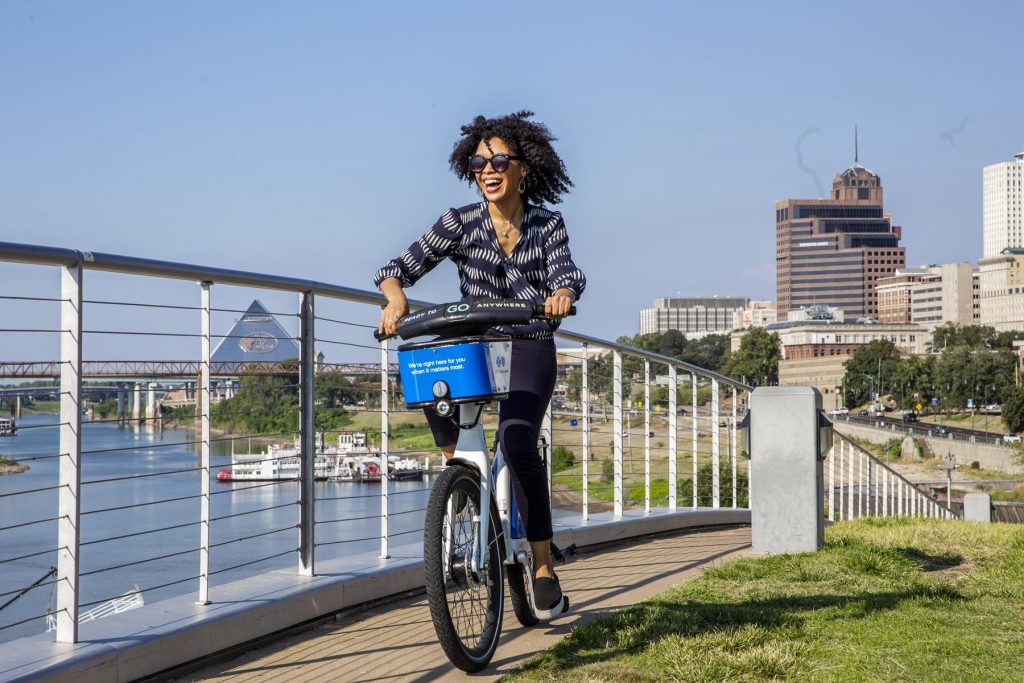 Those looking for bragging rights will want to walk, jog or cycle across the longest pedestrian bridge over the Mississippi. Called Big River Crossing, the metal pathway is just south of downtown and parallels railway bridges and the I-55 bridge. It takes about 20 minutes to stroll leisurely from Memphis to the Arkansas shore in West Memphis. A sign in the middle marks the Tennessee/Arkansas state line. Nearly a mile long, Big River Crossing is part of the recreational Big River Trail System in the two states.

Combine river views with a cocktail at Beck & Call, the only rooftop lounge in downtown Memphis. Perched atop the recently opened 227-room Hyatt Centric Beale Street Memphis, the bar specializes in bourbons and other whiskeys. Its small-bites menu has tasty morsels like the fried pork loin sandwich with hot pepper jelly and slaw. Latin American-inspired fare flavors the hotel’s CIMAS Restaurant, which features floor-to-ceiling windows overlooking the Mississippi and an outdoor patio with views of the river and outdoor pool.

The Hyatt Centric, right on the banks of the Mississippi, is the only hotel on Memphis’ fabled Beale Street, the musical heart of town, and soon will be joined by neighboring sister hotels—a Grand Hyatt and a new brand called Caption by Hyatt.

The Hyatt Centric is an easy walk from the neon glow of Beale Street, the heartbeat of Memphis nightlife. B.B. King’s Blues Club, Jerry Lee Lewis’ Cafe & Honky Tonk, Tin Roof, Silky O’Sullivan’s Irish Bar, Blues Hall Juke Joint and other music clubs offer everything from blues and jazz to country and rock. Many clubs serve Southern food favorites as well, including the barbecue meats that Memphis is famous for. Also in the neighborhood are FedEx Forum, Memphis Rock ’n’ Soul Museum and Memphis Music Hall of Fame.

For tourism information, visit the website of Memphis Tourism, www.memphistravel.com.