The Finest Products Are Illinois Made 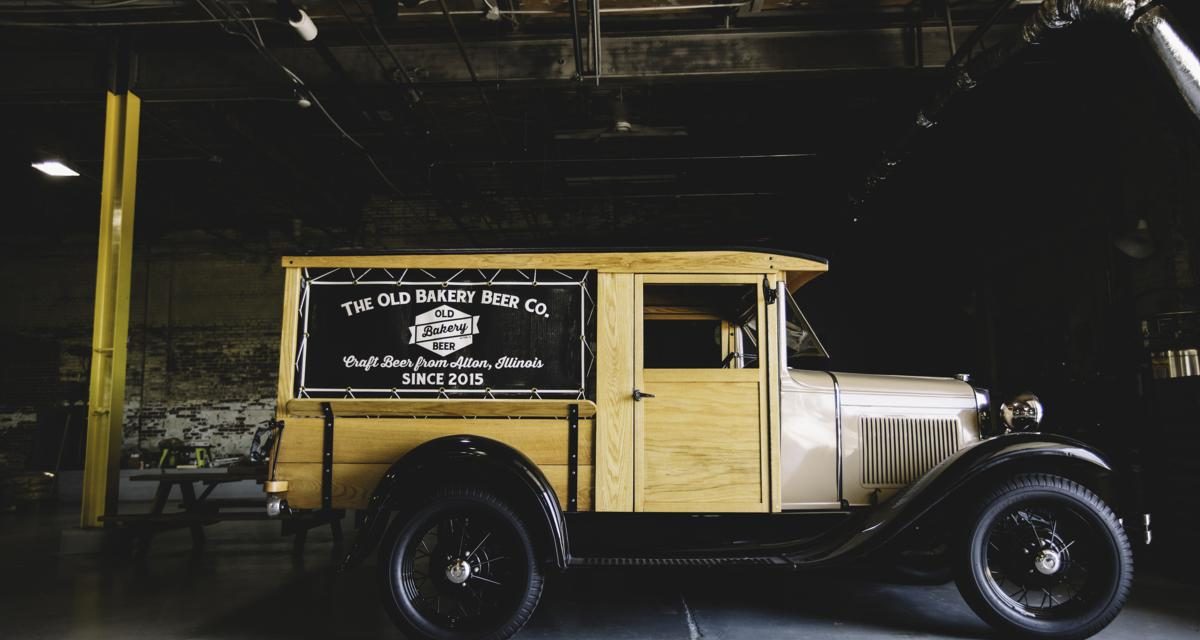 From delectable food to exquisite art, there’s something for everyone in the Land of Lincoln

With its centralized location in the country and a wealth of appealing cities across the state, Illinois has established itself as a tourism hotbed.
A major reason the Prairie State attracts so many visitors is its abundance of talented artisans who create some of the finest foods, beverages and products in the Midwest.
To highlight some of these extraordinary professionals, the Illinois Office of Tourism formed a program called Illinois Made, featuring those who craft, design and invent. Illinois Made gives an intimate glimpse into the creation process of artisans across the state on the Enjoy Illinois website by providing a behind-the-scenes view on what makes each maker exceptional.
Here are a few of more than 100 Illinois Made businesses that can be found throughout the state. 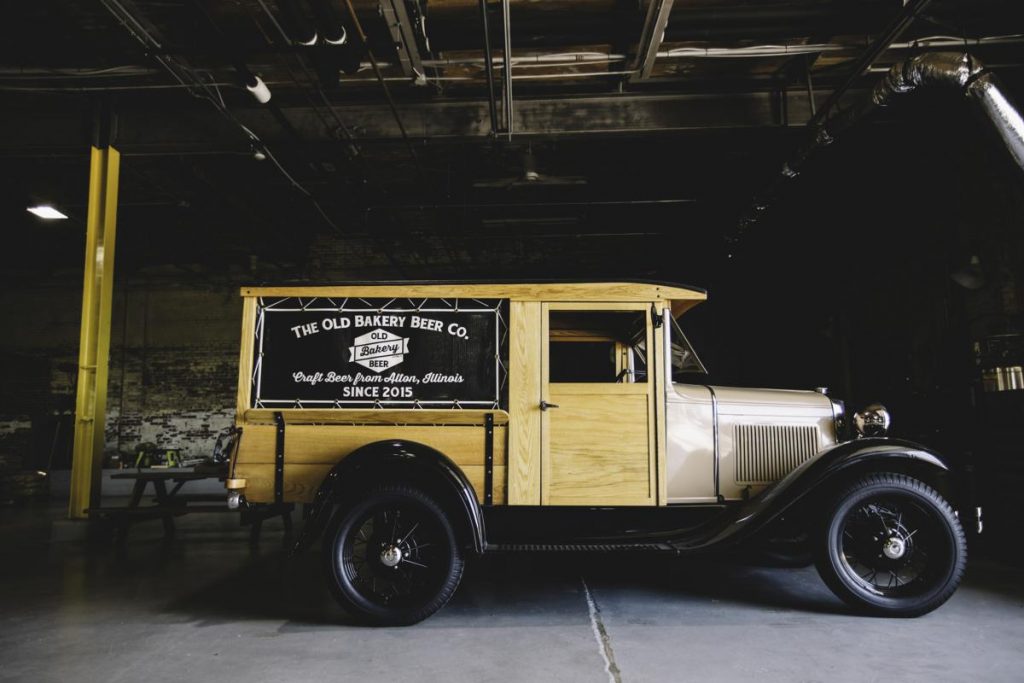 Old Bakery Beer Company, housed in the old Colonial Bread plant on downtown Alton’s Mississippi riverfront, was started in 2015 by James Rogalsky and Lauren Pattan, a husband-and-wife team committed to sustainability. All beer ingredients are USDA-certified organic, the bars and restaurant tables made out of reclaimed wood. The 50-foot-long centerpiece bar (lined with 28 stools) was assembled from 100-year-old floor joists from a one-room schoolhouse in Collinsville, and the beer tappers are reconditioned rolling pins. Old Bakery’s sprawling dining area has an industrial-chic vibe, with huge cement columns, exposed pipes and ducts, and cream-colored tile walls. Year-round beers include Porter, an English black ale; Citrus Wheat, brewed with lemon peel, orange peel and touches of chamomile and coriander; and Golden Oat, a light-colored ale brewed with flaked oats. Brewery tours with beer sampling can be arranged.

The showroom at Mississippi Mud Pottery abounds with one-of-a-kind stoneware items handcrafted by Chad Nelson and Felicia Breen, husband and wife, who earned degrees in fine arts from the Southern Illinois University in Edwardsville. Tours feature a demonstration at the pottery wheel in front and a look in back at the kilns and glaze-applying process. Merchandise ranges from mugs, magnets and wind chimes to honey pots, garlic keepers and olive oil pourers.

Scratch Brewing Company, in the Southern Illinois town of Ava, is a microbrewery and farm that resides five miles from the Shawnee National Forest. This bucolic location has earned Scratch a reputation as one of the most idyllic sites to drink beer in the world. Scratch embraces its roots by creating beer from farmed and foraged ingredients directly from the land surrounding it, and offers a standout selection of beer tastes that include nettle, elderberry, ginger, dandelion, maple sap, hickory, lavender and juniper. 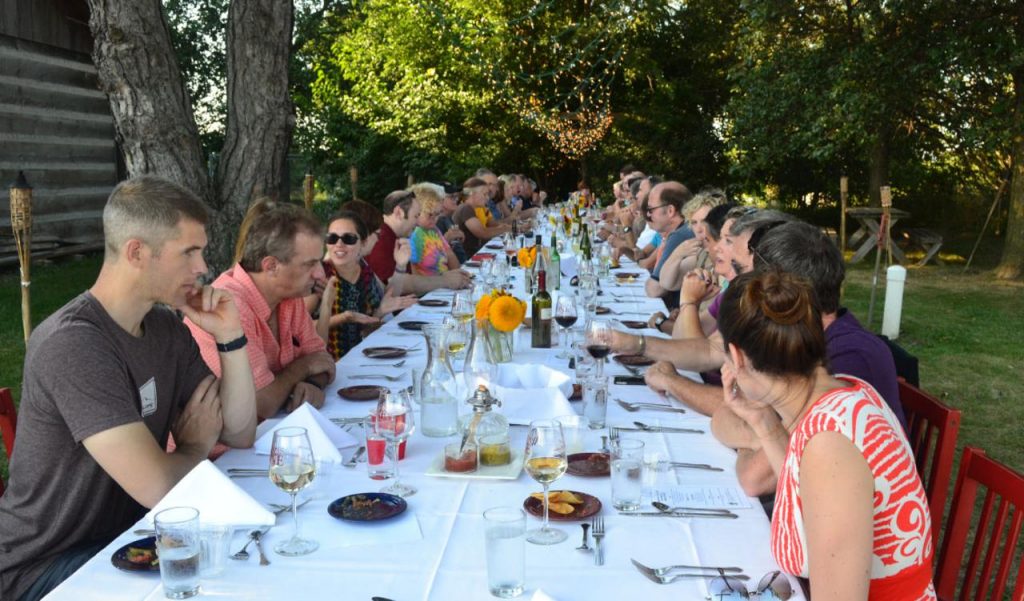 Prairie Fruits Farm & Creamery, in rural Champaign- Urbana, endeavors to educate about organic and sustainable agriculture and the connections between food production and consumption. Since 2008, Prairie Fruits Farm has been serving creative farm-to-table dinners: multi-course, slow-food meals that display the best of Midwest agriculture. These feasts typically take place outdoors, giving diners a pastoral experience, and the farm’s long dining tables encourage conversation among dinner guests. Many of the meals’ vegetables, herbs, fruits, eggs, cheeses and milk are grown or produced organically on the farm and the dinners often feature the farmers who grow or raise the food, enabling guests to learn about the farmer’s practices. The farm offers a wine list featuring small, family-owned wineries and also features locally-made micro brews and typically provides a special cocktail to match the theme of the dinner. 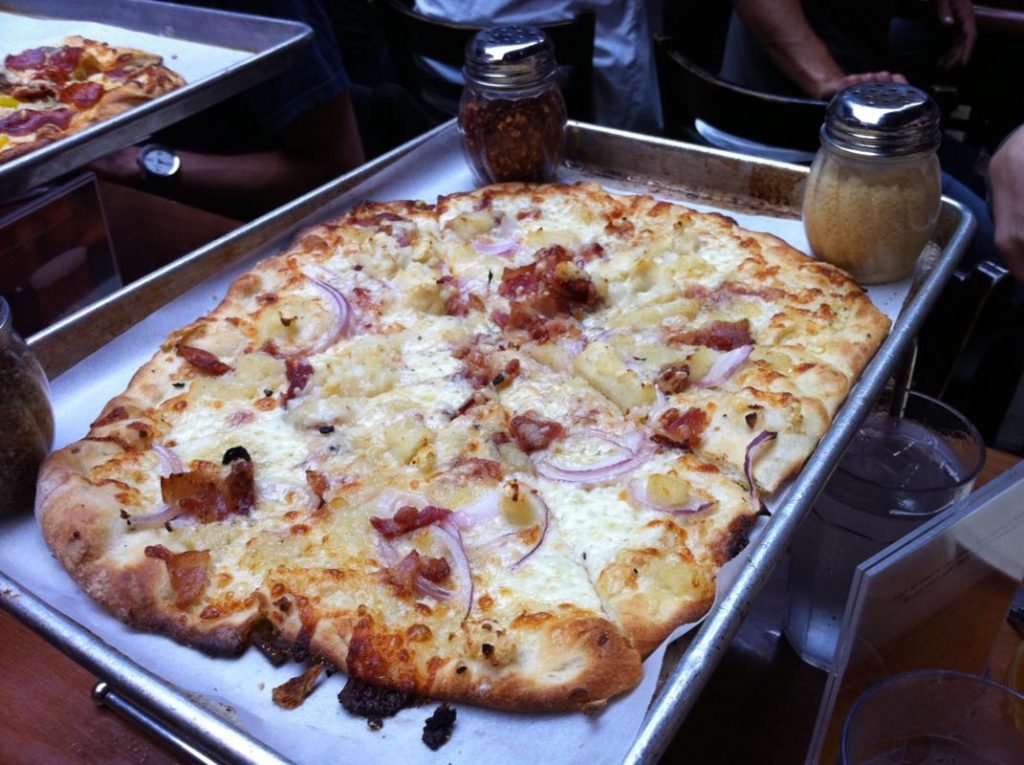 Consistently voted one of the best food cities in the country, Chicago has something for everyone. The city has earned a reputation as a great pizza town, and one of its finest establishments is Piece Brewery and Pizzeria in Wicker Park, which serves a thin-crust pizza featuring an ideal ratio of parmesan cheese, sweet-salty tomato crust and minced garlic. Opened in 2001, Piece has wowed visitors with its distinctive pies, including the famous white clam pie, and an impressive menu of award-winning hand-crafted beers made in-house.
Pizza and hot dogs aren’t the only things that have earned the label “Chicago style” thanks to Eli’s Cheesecake. In 1980, Eli Schulman debuted his soon-to-be famous cheesecake at the first Taste of Chicago, and Chicago-style cheesecake, known for its firm outside and creamy center, began to take the country by storm. Since those fledgling days, Eli’s popularity has grown substantially, as it has created cheesecakes for four American presidential inaugurations and has been featured on numerous television shows. Located just 15 minutes from O’Hare Airport, Eli’s Cheesecake World’s Bakery Café and Retail Store offers visitors the chance to try one of Eli’s 40 hand-crafted flavors. Eli’s offers a tasting and traditions tour for those looking to learn more about its enticing product.
Black Dog Gelato, on the city’s North Side, is an authentic creamery that serves inimitable hand-crafted flavors such as goat cheese cashew caramel, olive oil almond, salted peanut and Nutella pretzel. Black Dog recipes combine respect of the artisanal gelato-making process with modern flavors, producing rich, creamy gelato that is difficult to replicate. The shop’s milk is sourced locally and its nut spreads are homemade, which nicely accompanies the seasonal fruit and high-quality chocolate it utilizes to create its gelato.

Whiskey Acres Distilling Co. creates the only bourbon, whiskey and vodka made in the state from grain seeds sown, grown, harvested, distilled, barreled, bottled and sold on the same lot of Illinois farmland. Since the 1930s, the Walter family has tilled 2,000 acres surrounding the family farmhouse in Northern Illinois’ DeKalb County. Whiskey Acres annually produces up to 70,000 bottles of bourbon, rye, corn whiskey, vodka and an artisan series of small-batch bourbons, and is the nation’s second certified farm distillery, a distinction lavished upon facilities that produce spirits made from grains grown on the same farm where the distillery operates.

Since the 1800s, the St. Nicholas Hotel has been a landmark in Du Quoin. For 125 years, the hotel served as a longstanding refuge for travelers passing through the Southern Illinois town, but in 2005, the legendary building was shuttered. Identified as a historic site, the building was renovated and the St. Nicholas Brewing Company took over, opening its doors in 2014 as a microbrewery and restaurant. Pairing a passion for food, beer and bicycles, the brewpub is adorned with bikes, and its beer is brewed in house and paired with artisanal pizza and sandwiches.

Celebrated chefs around the world use hardwood cutting boards and butcher blocks made by John Boos & Co., the oldest business in Effingham, with a history going back to 1887. Its flagship product is the Boos Block (4 to 16 inches thick), which takes three days to individually craft from hard-rock maple. Group tours of the showroom include a short video and time to explore the gift shop, which has factory seconds. The Boos wood factory just opened in a new location next to its metal plant and will resume factory tours soon. The company also makes counter tops, work tables and islands, and rolling pins. 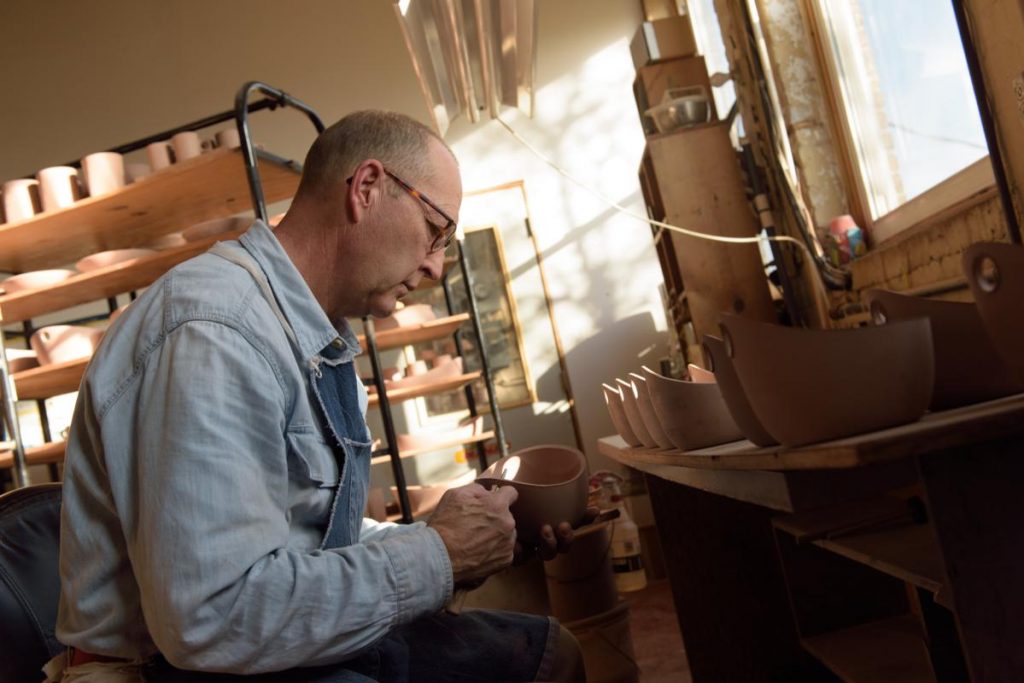 Eshelman Pottery is where Paul and Laurel Eshelman create functional masterpieces which range from cups to plates to serving dishes.

Located in the countryside of northwestern Illinois, Eshelman Pottery is where Paul and Laurel Eshelman create contemporary, red stoneware utilizing glazed and unglazed surfaces for a visual and tactile contrast. These functional masterpieces range from cups to plates to serving dishes, and are inspired by Paul’s vision of bringing people together around a dinner table. Eshelman Pottery is featured in art shows across the country, and can also be found in top-rated restaurants including renowned chef Grant Achatz’s Roister in Chicago.

Forty-one miles west of Chicago resides Geneva, home to All Chocolate Kitchen. In this quaint shop, three-time Guinness World Record holder Alain Roby prepares striking desserts and truffles from the finest Belgian and Swiss chocolate. Roby holds records for the world’s largest chocolate building, the world’s tallest cooked sugar building and the world’s longest candy cane, and brings international acclaim to Geneva with his unique sculptures made from blown sugar. Roby merges the worlds of fine art and sweets by creating edible masterpieces for all occasions with a menu that includes homemade gelato cakes, truffles and pralines, French crepes, waffles and chocolate fondue.

The cheese made at Marcoot Jersey Creamery is really creamy because milk from Jersey cows has a high cream content. “If you like whole milk, you’ll like our cheese,” says Laura Wall, tourism director at the artisan creamery that opened on a seventh-generation dairy farm in 2010. One-hour group tours are $3 per person and include samples of five or six cheeses. Tour stops include the creamery itself, where visitors see workers stirring the tanks of whey through a large viewing window; the calf barn; and milking parlor, where cows are hooked up to a robotic milker. Among cheeses for sale at the creamery store are the popular cheese curds (plain cheddar or with garlic herb or sriracha flavoring).

The modest town of Monticello, in Central Illinois, is home to Prairie Fire Glass, one of the top glassblowing shops in the Midwest. Complete with roaring furnaces, Prairie Fire allows visitors to watch molten glass transformed into beautiful and practical works of art. Among the shop’s many handmade creations are vases, bowls, jewelry and ornaments, and it also stocks mixed-media work from local artists, including greeting cards, paintings, sculpture and photography. 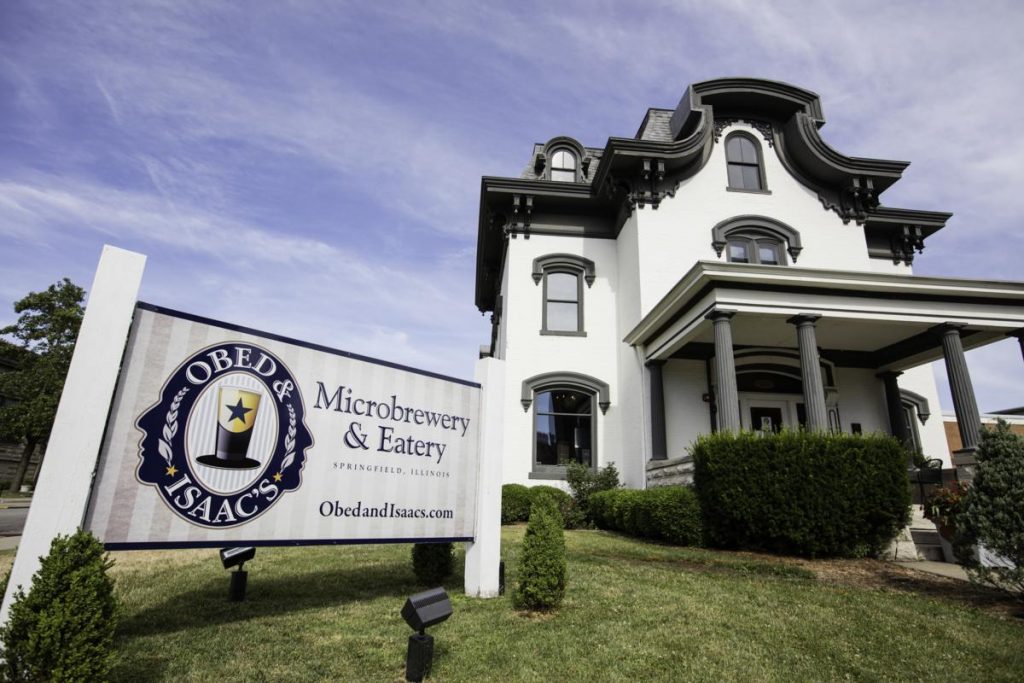 The state capital of Illinois, Springfield is the epicenter of government activity. It is also the town that serves a dish rarely found anywhere else: The horseshoe. An open-faced sandwich that consists of thick-sliced toasted bread, a hamburger patty, copious amounts of French fries and is coated in a rich cheese sauce, the horseshoe is a delicacy that Springfield residents and visitors alike relish. While Springfield has a multitude of establishments that serve the horseshoe, one of its tastiest can be found at Obed and Isaac’s Microbrewery. Stationed near the Lincoln Home National Historic Site, Obed and Isaac’s offers a wide range of meat options with its horseshoe, including ground sirloin, pulled pork and lamb, and complements that dish with an eclectic menu and locally crafted beer.

Down the road is Incredibly Delicious, an inviting French bakery and café that lives up to its lofty name. Located inside of the historic Weber House, a 19th-century mansion in downtown Springfield, this locally owned shop specializes in artisanal breads, traditional croissants, handmade pastries, specialty cakes and desserts. Lunch is served six days a week, and everything is made on-site, including the shop’s signature flourless chocolate cake.

Established in 1884, Maldaner’s Restaurant and Catering has been an institution in Springfield for generations. And while a visit to Maldaner’s is akin to taking a trip back into time, the celebrated restaurant also serves the best of contemporary American fine dining. Maldaner’s features seasonal local and regional ingredients influenced by Mediterranean composition and preparation, and heirloom vegetables, humanely raised meats and slow food are all artistically prepared and presented.