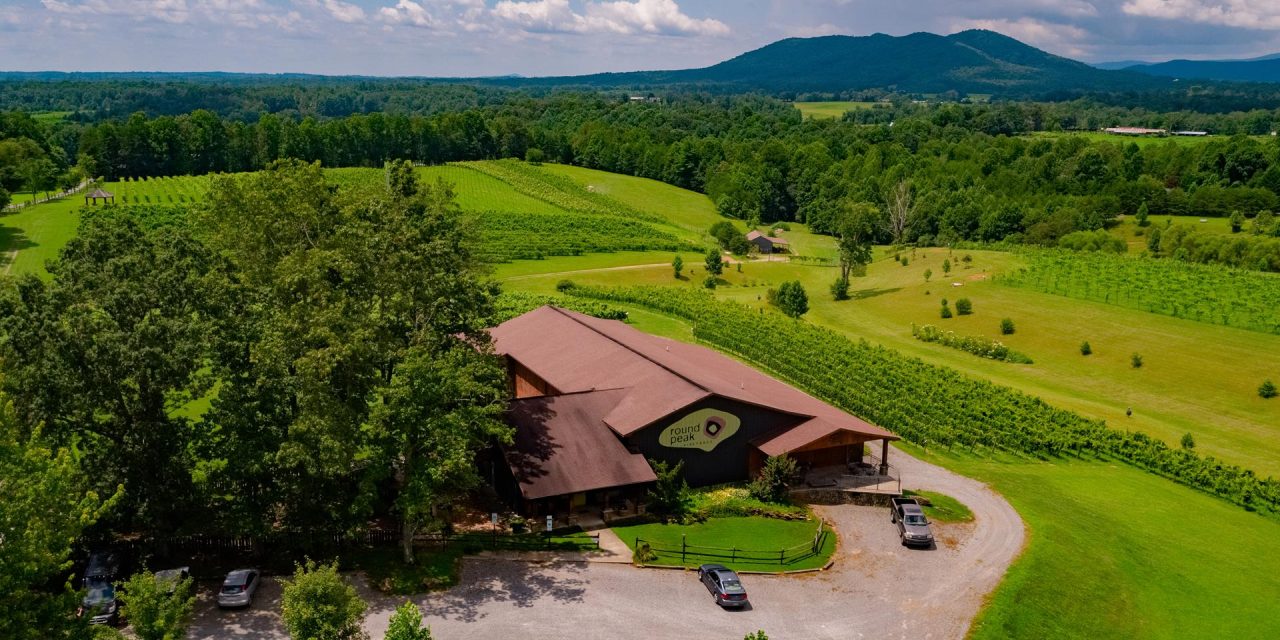 Clustered around Mount Airy, Dobson, Elkin and other towns in northwestern North Carolina are more than 45 wineries, each with their own story to tell

From a patio overlooking vineyards and the foothills of the Blue Ridge Mountains, I drank in the scenery while savoring my flight of four craft beers from the tap, beers so tasty that I couldn’t decide which one I liked best.

That’s right, beer. Though my adult son and daughter chose to sample the wines of Round Peak Vineyards, I decided to go rogue and try beers brewed by sister company Skull Camp Brewing.

Touring North Carolina’s Yadkin Valley wine region last fall, we came to learn that each of its 45-plus wineries has its own personality and quirks, its own style of winemaking and a unique story to tell. Most of the wineries are small and family-owned. All offer a relaxing experience enhanced by an easy-going Southern hospitality.

The Yadkin Valley of northwestern North Carolina extends from the Virginia state line to south of Winston-Salem, encompassing both the Blue Ridge foothills and the Piedmont. From its headwaters near the Blue Ridge Parkway’s Thunder Hill Overlook, the Yadkin River flows more than 200 miles southeast into South Carolina, making it one of the longest rivers in North Carolina.

The valley’s terrain and climate are similar to those of France’s Burgundy and Italy’s Piedmont wine regions. Wineries in the federally designated Yadkin Valley American Viticultural Area (AVA), not surprisingly, specialize in French- and Italian-style wines. The dry loam soil is ideal for growing European varietals such as Merlot, Cabernet Franc, Cabernet Sauvignon, Chardonnay, Tannat and Riesling.

Yadkin Valley’s wine industry took off in the 1990s and has really blossomed in the last 15 years. New wineries crop up all the time. Many of them occupy old farms that once raised grain, tobacco or cattle.

Pairing Wines and Beers with a Round of Disc Golf

Round Peak Vineyards produces 10 French and Italian varietals, using only grapes grown on the 13-acre property, which is just outside of Mount Airy. It is the Yadkin Valley’s northernmost winery.

Perhaps Round Peak is best known for its Nebbiolo, a red wine made from an Italian grape rich in tannins. Owner Ken Gulaian said, “There’s only two of us that grow that grape in North Carolina because it’s a bit of a challenging grape to grow. It’s probably the grape with the most tannins, which a lot of people know are antioxidants.” 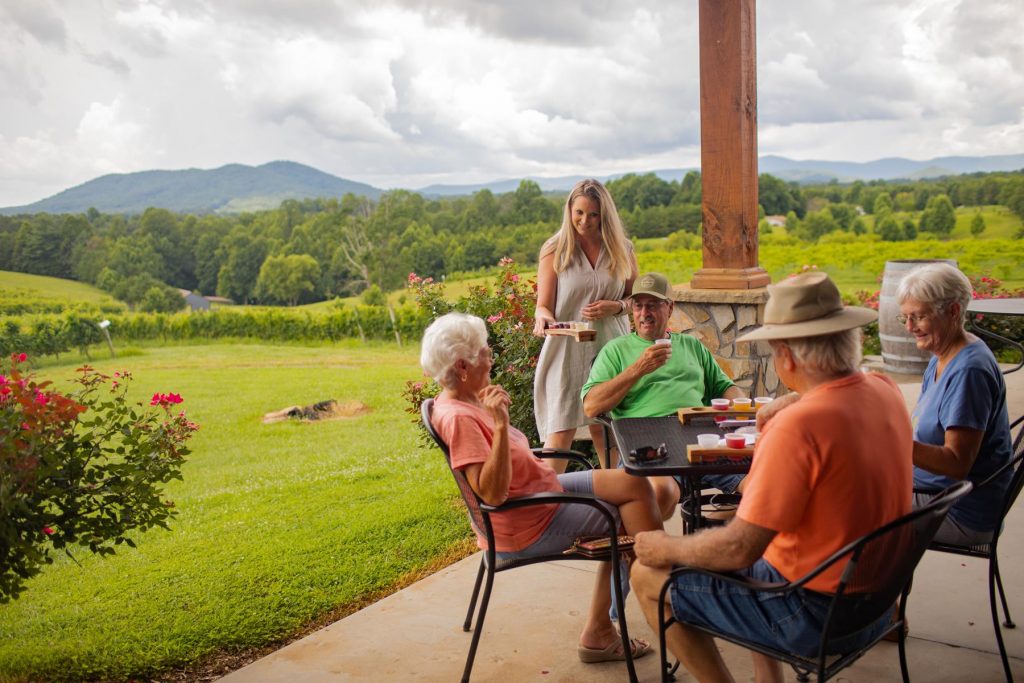 From our perch on the terrace attached to the tasting room, we had views of Round Peak and Skull Camp mountains. Meandering through the vines is an 18-hole disc golf course with baskets constructed of retired wine barrels and recycled bicycle wheels. People can rent discs or bring their own.

At sunset we had a chance to walk around the vineyards before retiring to our four-bedroom house, one of two vacation rentals at Round Peak (available through Airbnb and VRBO). Amenities include a fully equipped kitchen, screened-in back porch, two baths and multiple televisions. The walls are adorned in wine-themed decor.

Both homes (“cabins,” as they’re called) sleep up to eight, an arrangement that works well for families or guys/girls getaways. While the homes certainly would not accommodate a motorcoach tour, Round Peak welcomes bus groups for tastings and tours.

Earlier in the day, we had spent time in Mount Airy, which plays up its claim as the hometown of actor Andy Griffith. Star attraction is the Andy Griffith Museum, and shops on Main Street deal in souvenirs related to “The Andy Griffith Show,” the classic 1960s TV sit-com about a sheriff in the sleepy Southern town of Mayberry. Squad Car Tours takes tourists around Mount Airy in restored vintage Ford Galaxies, the kind Andy and his fumbling deputy, Barney Fife, drove in the show.

A Shade of Gray

Haze Gray Vineyards, on a former corn and tobacco farm near Dobson, pays tribute to America’s military. The tasting room, which opened in December 2019, is painted haze gray, the color of U.S. Navy ships, and the mountains visible from the property have a grayish haze. (The phrase “haze gray and underway” is a reference to Navy surface ships that are actively deployed.)

What’s the military connection all about? Deane spent 30 years as a flight officer in the Navy, and his family’s record of military service dates back to the American Revolution. Becky grew up in an Army family, and their son currently serves in the U.S. Air Force. Deane’s flight helmet, from his days as a Navy pilot, is mounted above the tasting bar. Hanging from the ceiling is a prop from the kind of early de Havilland biplane his grandfather flew. Framed photos of the Muhlenbergs’ relatives in uniform adorn the tasting room’s wall of honor, and visiting veterans are encouraged to share their own. Daughter Ashley, an artist, has conducted wine-and-paint nights in the room. 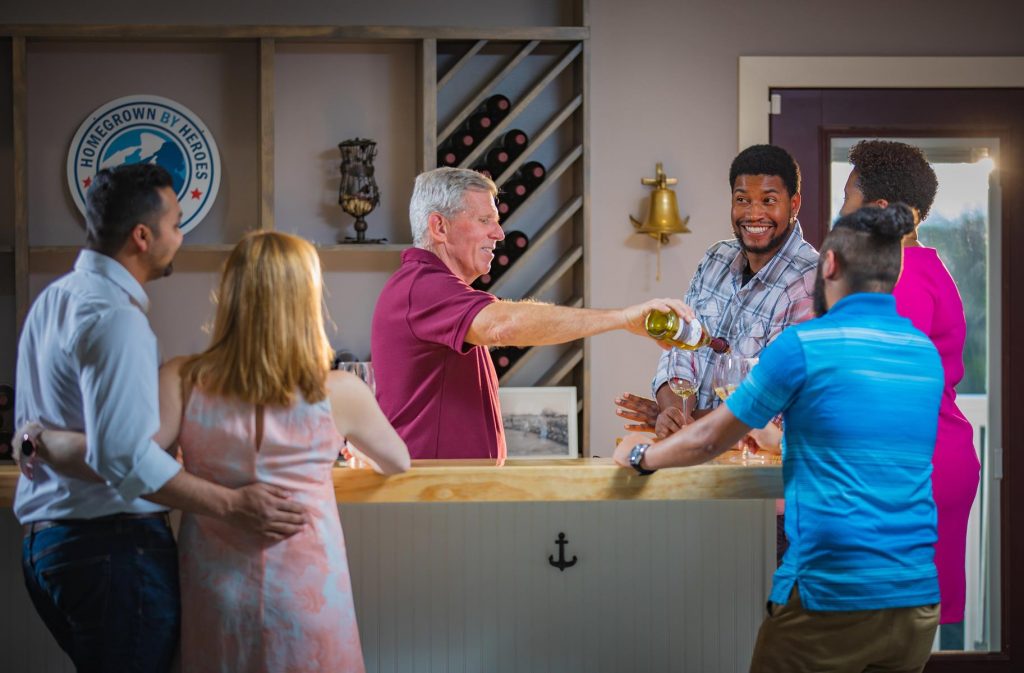 In 2020 the winery received an award from the U.S. Department of Labor for recruiting and hiring veterans. The employees enroll in the viticulture and enology program at Surry Community College in Dobson, the seat of Surry County, which lies in the heart of Yadkin Valley wine country. (The Surry County Wine Trail counts 20 wineries.)

Haze Gray wines are primarily French-style, with the one exception the Italian-style Pinot Grigio. The Chambourcin, Pinot Grigio and Boot Camp Red (a combination of Cabernet Sauvignon, Petit Verdot and Chambourcin grapes) have won state and national awards. In addition, the Muhlenbergs make a dry and semisweet Traminette, a Merlot, Chardonnay, Petit Verdot and Rose. They grow nine varieties of grapes in the nine-acre vineyard. Cattle also are raised on the 85-acre farm.

Driving around the Dobson area, we made a brief stop at Shelton Vineyards, the largest family-owned estate winery in the state and winner of more than 450 awards. An impressive entrance drive, a spacious retail shop and the Harvest Grill restaurant lend the estate an upscale feel. Tours follow the winemaking process from growing grapes to bottling wine in the state-of-the-art gravity-flow facility, ending with a tasting of five of Shelton’s 14 wines. (Note: The coronavirus pandemic has halted tours temporarily.)

It was brothers Charlie and Ed Shelton of Shelton Vineyards who in the early 2000s undertook the lengthy process of getting government designation of Yadkin Valley as North Carolina’s first AVA. That set the stage for growth in the valley, particularly in Surry County. 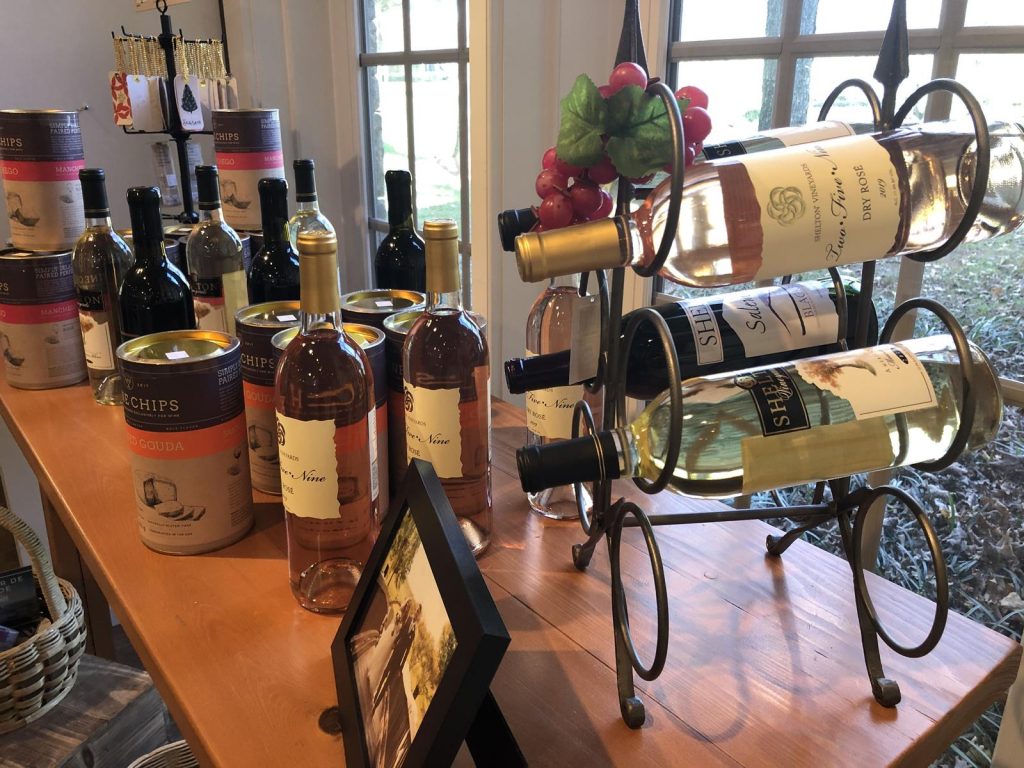 Next on our agenda on that gorgeous fall day was Grassy Creek Vineyard & Winery, north of Elkin. It occupies 225 acres once known as Klondike Farm, a dairy operation that produced the self-proclaimed “best chocolate milk in the world.” The cavernous red barn that housed horse stables in the 1920s is now a tasting room with a cozy fireplace and an artistic cow-motif decor, while the winery is in the dairy barn where Golden Guernseys resided. The dairy-inspired theme carries over to Grassy Creek’s semisweet wines under the brand Klondike Farm. They are served from glass bottles that resemble old-fashioned milk bottles and bear the image of a cow’s head and the tag “Guernsey Table Wine.”

The farm’s history also includes its use as a corporate retreat and event center when owned by Chatham Manufacturing Company, once a major player in North Carolina’s textile industry and the largest maker of blankets in the world. Four of the property’s original 1920s cabins, just steps from the tasting room, provide overnight accommodations. Several partners in the Grassy Creek venture come from a background in textiles. 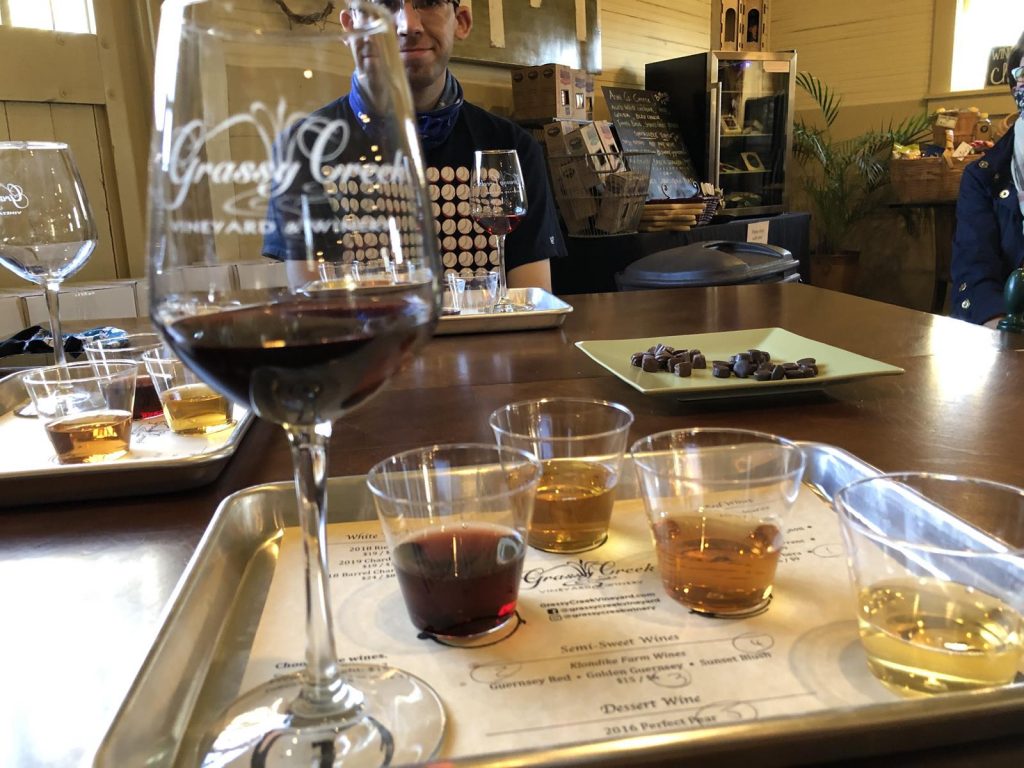 Group tours at Grassy Creek can include a wine tasting with crackers, salami and North Carolina cheeses. With our wine we enjoyed raspberry and sea salt caramel chocolates from the Yadkin Valley General Store in Elkin.

It was a perfect day to be outdoors, so we embarked on the two-mile hiking trail that runs from the winery to Carter Falls. Strewn with leaves and pine needles, the path, managed by the Elkin Valley Trails Association, took us through forests and farmlands on our way to the waterfall on Big Elkin Creek.

To get in more of the region’s natural beauty while it was still daylight, we then drove to Pilot Mountain State Park, whose main peak towers more than 2,000 feet over the Yadkin River Valley. At the top, people can take a short trail to an observation area that looks across to the landmark crag, or they can opt for a fully-accessible viewing platform adjacent to the parking area. From the gleaming new visitor center, shuttle service to the upper portion of the park is available on weekends and prime visitor days. Both Pilot Mountain Vineyards & Winery (which opened a new tasting room last August) and JOLO Winery & Vineyards offer fine views of Pilot Mountain. 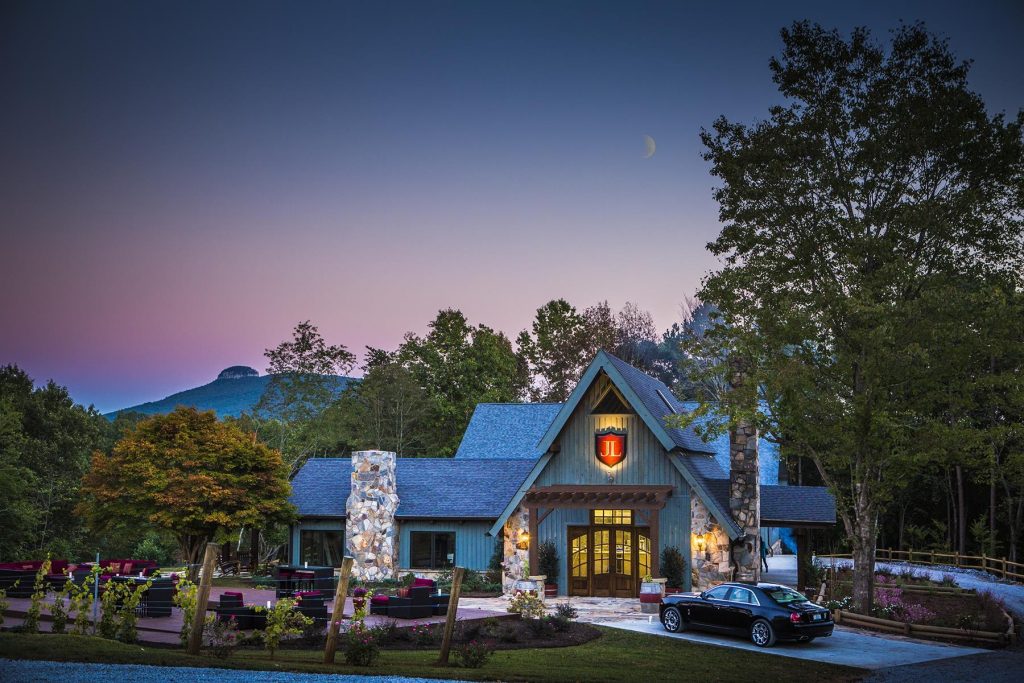 The fictional town of Mount Pilot on “The Andy Griffith Show” is a shout-out to real-life Pilot Mountain (pop. 1,500) at the edge of the park. A new downtown tea shop, Yadkin Valley Tea Trade, offers high-quality loose-leaf and herbal teas in a relaxing setting. Teas can be purchased ready to drink or as tea bags to prepare at home. The teahouse also sells jams and baked goods, plus tea accessories, honey, candles and handcrafted gifts.

For dinner in downtown Elkin, we feasted on Southern dishes with an artisan touch at Southern on Main. It was hard to choose because everything was so tempting. Dinner entrees include blackened catfish with cheddar grits, shrimp & grits, fried chicken breast in sweet tea brine and creamy pepper gravy, and pan-grilled pork medallions with port cherry sauce, braised red cabbage and mashed sweet potatoes. For starters, the menu lists small plates like fried green tomatoes, black-eyed pea cake and red-neck salad (fries topped with barbecue pulled pork and cheddar).

Southern on Main is on the Surry Sonker Trail, a collection of five Surry County eateries that serve a dessert called sonker, the regional version of fruit cobbler. Besides the excellent blueberry sonker, we shared the decadent bread pudding. 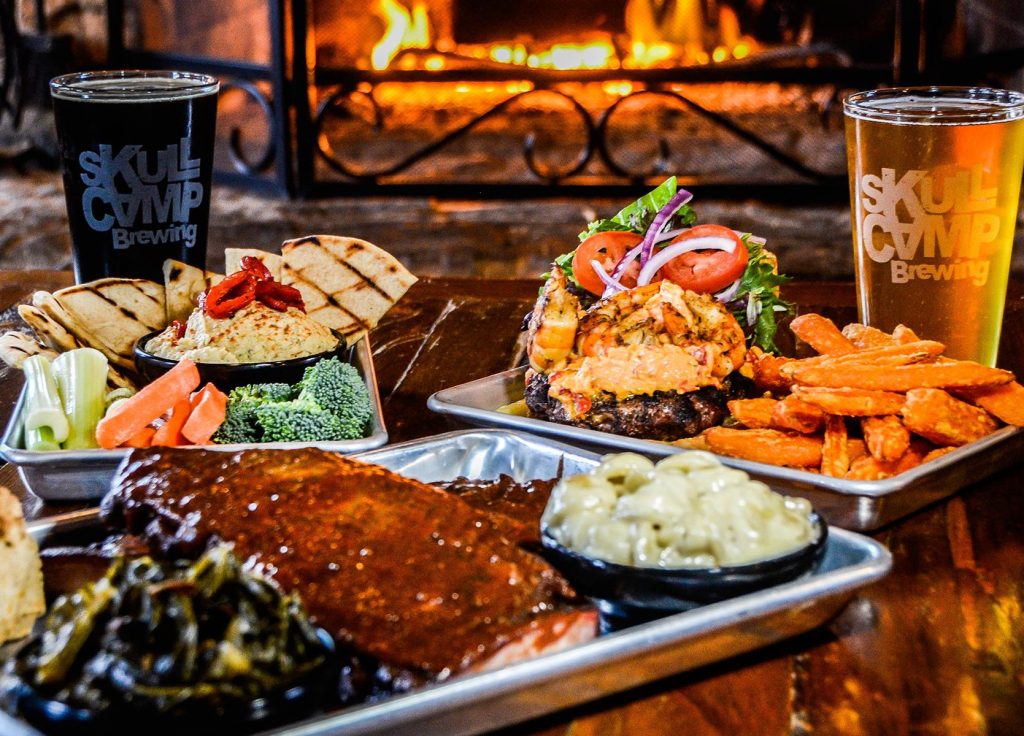 From premium beverages to lip-smacking eats, Yadkin Valley wine country caters to the discriminating palate and does it with heaping helpings of Southern hospitality.

For more information on the Yadkin Valley, visit www.yadkinvalleync.com.