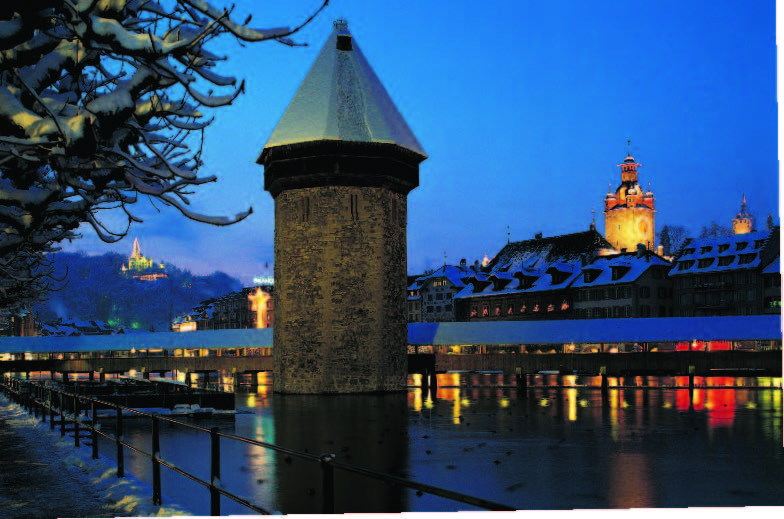 Switzerland evokes images of majestic Alps, lush meadows and deep blue lakes. And the easiest way to see this beautiful countryside and major cities is by rail.

Barely larger than Maryland, Switzerland has 3,500 miles of rail lines, 650 miles of cable cars/mountain railroads and 8,000 miles of bus lines. The Swiss Travel System also encompasses boats and an integrated baggage system between airports and rail stations that allows travelers to check their bags just once. Leisure Group Travel recently visited Switzerland on a five-day FAM trip that featured eight trains and a boat.

French-speaking Geneva is in the southwest corner of the country at the confluence of the Rhone River and Lake Geneva. Known for the Geneva Conventions that govern conduct during war, the city is the home of the International Red Cross and the European seat of the United Nations. Visits can be made to the International Museum of the Red Cross and the palace of the United Nations. A large floral clock in the English Garden is a symbol of the local watch industry. The Jet d’Eau, a 400-foot water jet at the edge of the lake, is the city’s chief landmark. Sightseeing boats offer the best views of the stately castles and manor houses that line the lakeshore.

Depart Geneva on the Golden Pass Line, which passes through Montreux, home of the famous jazz festival, and Gstaad and then between the Alps and Lake Thun on the four-hour journey to Interlaken, a popular destination for outdoor tourists since the early 1800s, when Johann von Goethe and Felix Mendelssohn were visitors. Three notable mountains tower over the valley—the Eiger (ogre), Mönch (monk) and Jungfrau (young woman). Many thriller films have been shot here, including The Eiger Sanction and James Bond movies.

One rail option from Interlaken is the cog railway to the Schynige Platte. The one-hour trip goes through linden, beech, fir and spruce forests and finally arrives above the tree line at 6,000 feet. The top provides views across to the three iconic mountains, and there’s a restaurant with pretty panoramas. An alpine botanical garden is interlaced with small paths that wind across the mountain and describe over 600 native plant species. A more adventurous alternative is to take the train to Grindelwald. From there a six-seat gondola takes visitors to First, a hiking area with 70 miles of trails. The quick way down from there is on the First Flyer. This is a half-mile ride at 55 miles an hour on Europe’s only zip-rider.

Taking the Jungfrau Railway to the Jungfraujoch is a unique experience. The two-hour trip on the line that opened in 1912 shows amazing engineering that took 16 years to complete.

There are three train changes on the way, featuring ever narrower gauges to better make the increasingly tighter turns. The Eiger Ambassador Express cog railway includes part of the historic train that made the first journey up the mountain. From Kleine Scheidegg (small ridge) the last 50 minutes of the ride are all tunnels as the train travels through the north face of the Eiger to the Top of Europe, at 5,200 feet the highest rail station in Europe.

The Ice Palace at the top is carved into the mountain and visitors walk through an ice tunnel to the main building, which houses train control, five restaurants and all utilities contained inside the mountain. An elevator takes visitors to the Sphinx, a sightseeing terrace that offers views of a 15-milelong glacier and on a clear day, Germany, France and Italy.

Yet another rail option from Interlaken is Harder Kulm, a funicular that has been traveling the eight-minute trip up the Harder since 1908. The historic restaurant at the top looks down on Interlaken and Lake Thun and across to the Eiger, Mönch and Jungfrau.

It’s back on the Golden Pass Line for the two-hour journey along five lakes and the Bernese Alps and through the Brunig Pass to Lucerne, located on the shores of the eponymous lake. The city’s landmark is the Chapel Bridge, one of Europe’s oldest wooden bridges and the center of the city. The bridge has been restored after a serious fire, but many of the original overhead paintings survive.

Lucerne is a city of picturesque town squares set against the Museggmauer, a wall that once fortified the city against attack. One of the best-known monuments in Switzerland is the dying lion carved into a rock face to commemorate Swiss guards who were killed during an attack on the Tuileries. Given that Switzerland has such a highly evolved transportation system, it shouldn’t be a surprise that the Swiss Museum of Transport in Lucerne is the most-visited museum in the country. It displays trains, planes, boats and automobiles. The complex has an IMAX theater and planetarium.

Boat rides are available on Lake Lucerne, or one can train or boat to nearby mountains such as Rigi and Pilatus. Mt. Rigi can be reached by rail from Vitznau, a route that dates to 1871 and is the oldest mountain railway in Europe, or from Goldau or via cable car from Weggis.

From Lucerne there are several options for continuing the journey. Continue north to Zurich, the largest city, or Bern, the nation’s capital. Another choice would be to head to the southeast corner along the Italian border to visit St. Moritz, Tirano and Lugano. Or consider the Glacier Express, a full-day train ride connecting the ski areas of St. Moritz and Zermatt and extending nearly the full way across the Swiss Alps.

The Swiss Pass offers unlimited travel on Switzerland’s transport network, plus discounts on mountain railways and free admission to hundreds of museums. Travel planners will have no trouble assembling a fun trip that is packed with stunning alpine and lake scenery and lots of outdoor activities. And 2012 offers a tie-in with the 100th anniversary of the rail line to the Jungfrau, the Top of Europe.