Space For Friends and Fun in Nebraska

If your travel group wants outdoor adventure under a big blue sky, steer a course for Nebraska’s parks.

When it’s time to get your group together for their next trip, put Nebraska at the top of your outdoor destinations list. Sure, you can make fun memories just about anywhere when you combine the right people. But why not do it in a place that encourages visitors to “visit nice” and “just slow down?” Sounds like the right group travel philosophy to me.

Even better, Nebraska offers outdoorsy travel groups a plethora of options and landscapes. From the lunar-esque beauty of the Badlands to the historic charm of the Great Plains, Nebraska has a natural experience to match just about any mood and activity level.

Let’s be perfectly clear: we’re not saying that Nebraska will leave city-dwellers cold and bored. The state’s Metro Corridor, which runs between Omaha and Lincoln, has more than enough dining hotspots, event spaces, clubs, performing arts venues and other attractions to keep anyone happy. But this is a state that is crisscrossed by various historical trails, that has the mighty Missouri River as a boundary, and that encompasses a variety of geographies. Give Nature a chance.

In fact, your group doesn’t even have to leave the air-conditioned (or heated) comfort of their vehicle to do so. 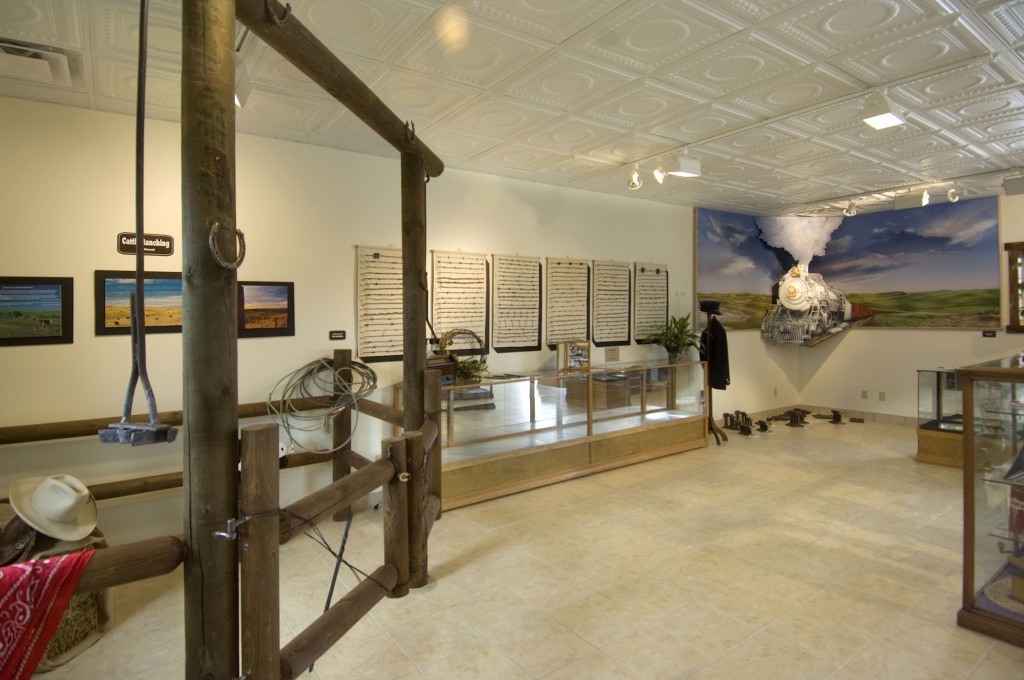 Discover the beauty of the Highway 2 corridor at the Sandhills Journey Scenic Byway Visitor Center in Broken Bow.

Other trails comfortably jog along state roads. The 272-mile Sandhills Journey Scenic Byway, which stretches from Grand Island to Alliance, has been called one of the most beautiful drives in the nation.

Or take the 158-mile Gold Rush Byway, which follows US Highway 385 from the South Dakota border in the north to the Colorado state line in the south. Not only will your group be treated to a vista of rolling hills, buttes, and river valleys, they’ll also get a sense of the Wild West – which, even in modern Nebraska, never feels all that far away.

Exploring the Best of Natural Nebraska

While cruising around in a land yacht is okay up to a point, there comes a time when everyone will want to stretch their legs a bit. And there is plenty of room to do that here, as you get up close and personal with this slice of the Midwest. 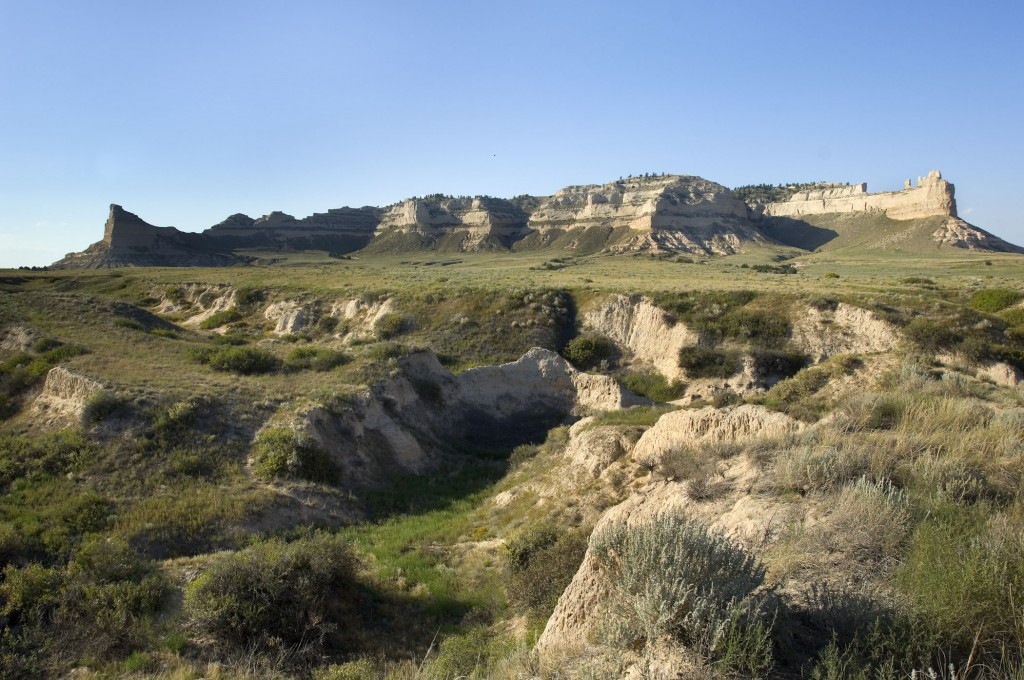 Nebraska’s Scotts Bluff National Monument is a great starting spot for any discussion of the state’s outdoor wonders. The skyline, with its rounded yet rugged peaks, is immediately recognizable. While the introductory film at the Visitor Center might capture your group’s intellectual interest, nothing beats exploring the bluffs themselves, either by car or via hiking trail. (Note: Some vehicle height and size restrictions are in place, and hiking is only allowed during daylight hours.) Don’t forget to pack a picnic lunch; your group won’t want to miss the chance to munch on their favorites while absorbing some beautiful scenery.

Scotts Bluff does have one shortfall – at least for some travelers. There’s no camping onsite. If camping is your thing, then be sure to check out Indian Cave State Park. One of the state’s most popular parks, this 3,000-acre parcel borders the Missouri River and comes with an assortment of hiking trails. Would your friends like to try their hand at fishing, boating, canoeing or kayaking? How about taking a ride down one of the equestrian trails? It’s all available, in a beautiful setting of grasslands, river banks and forests. 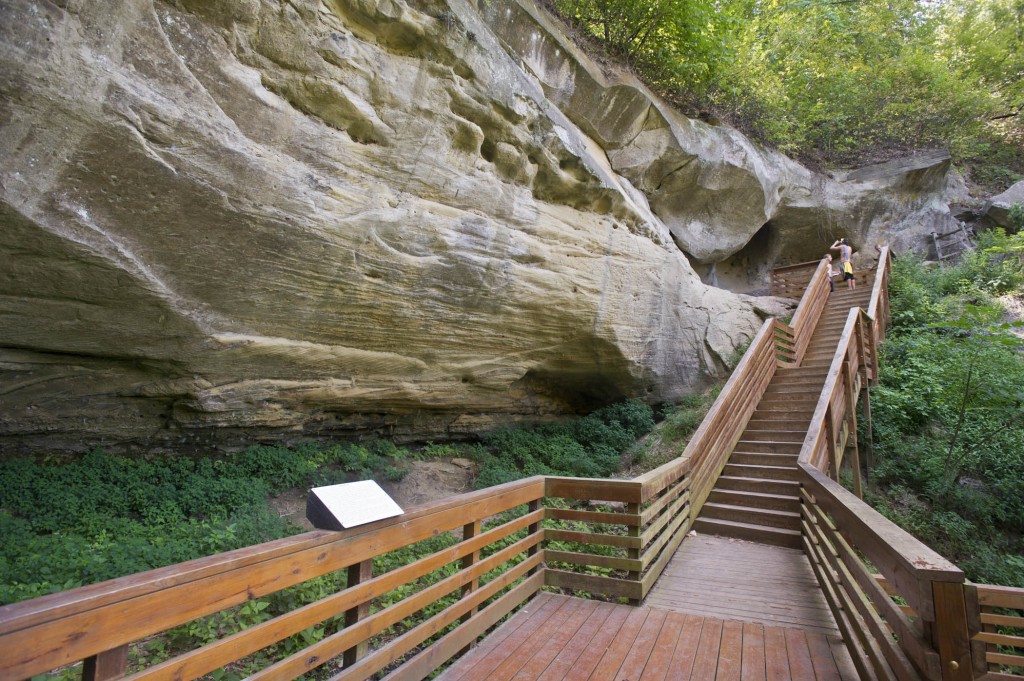 Indian Cave State Park, near Shubert, is home to an ancient cave with prehistoric cave drawings adorning the walls.

In the sprawling country of northwestern Nebraska you’ll find Agate Fossil Beds National Monument. While this isn’t the only paleontologically-oriented spot on the state map, it does offer a wide variety of things for visiting groups to do. Top on the to-do list is to come prepared with a full tank of fuel for your vehicle and for your bellies, as the park is more or less isolated. But once you get here, your group can see fossils and a life-sized display of various prehistoric mammals as well as the remains of the long-gone waterhole around which many of the bones were gathered. Or take a hike along the Daemonelix and Fossil Hills Trails, where you’ll learn about the culture as well as the present and distant past of the area.

Don’t let the possibility of inclement weather deter you from making this trip: there’s plenty to do in the Agate Fossil Beds’ visitor center and museum if your hike gets rained out. In addition to displays evoking prehistory, your group can also see a large collection of Lakota artifacts or (virtually) explore the trails on the Interactive Hiker.

If your group loves big skies, wide-open spaces and plenty of room to have a good time, then put Nebraska on your group travel destination list. Not only is it full of the great outdoors, it’s also full of surprises.

What would you add to our list of Nebraskan outdoor wonders? Tell us in the comment section below!