4 Unique Experiences on This Trip

Duration: 3 Days Available: Year-round This Itinerary is Ideal For: All

Morning
Begin your visit in the Bronzeville neighborhood, which flourished in the early 20th century after African-Americans from the South settled in the area and oversaw an arts boom to rival the Harlem Renaissance in New York. The neighborhood remains the heart of Chicago’s black culture, evidenced by the numerous art galleries your group can visit in the morning. Gallery Guichard, Little Black Pearl and the South Side Community Art Center all showcase work by local and international artists that explore the African Diaspora. As you travel north towards downtown on Martin Luther King Drive, admire public sculptures such as Monument to the Great Migration and Victory Monument (which honors the black soldiers able to serve in WWI after a campaign led by the Chicago Defender newspaper).
Afternoon 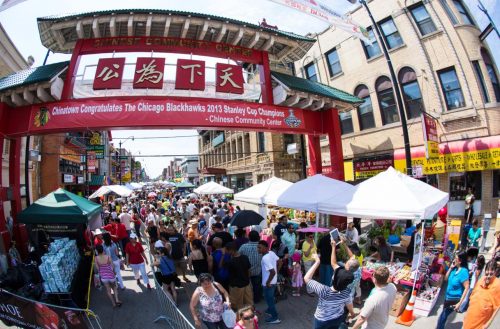 Continue north to spend your afternoon in Chinatown, one of the densest Chinese-American population centers in North America. After enjoying a dim sum lunch at Phoenix Restaurant, wander through Wentworth Avenue—a charming mixture of East Asian and Western urban architecture. Pass by a replica of Beijing’s famed Nine Dragons Mural Wall on your way to Chinatown Square, a two-story outdoor mall that features the Pan Asian Cultural Center and a collection of Chinese zodiac animal sculptures and tile mosaic that contains over 100,000 hand-painted glass shards. 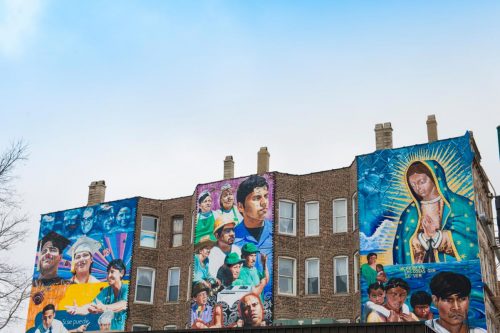 The next stop in your tour of Chicago is the Pilsen neighborhood—an area once dominated by German immigrants
and now a flourishing hub of Hispanic Americans. Your group can spot numerous murals celebrating Latino culture along 18th Street and discover beautiful works in the National Museum of Mexican Art, which features folk art, paintings and sculptures.
Afternoon
Indulge in a hearty Sicilian lunch on Taylor Street, the main artery of Little Italy and the host to dozens of restaurants that serve authentic pizza and pasta. Stops along this famous thoroughfare include the flagship location of Al’s Beef, creator of the famous Italian beef sandwich, and the National Italian American Sports of Hall of Fame, which honors famous athletes such as Joe DiMaggio and Rocky Marciano.
Evening
After a short stop at the National Hellenic Museum, savor a Mediterranean meal in Greektown. Greek Islands’ large dining space is ideal for groups and features fried zucchini chips, keftedakia meatballs and saganaki (fried cheese).

Morning
Bolstered by thriving Catholic parishes, Chicago became a haven for Eastern European immigrants in the early 1900s. Today the Avondale and Bucktown neighborhoods retain that heritage, and the city is home to more Polish speakers than anywhere else in North America. Spend your morning walking along Milwaukee Avenue, the Northwest Side’s main
commercial drag, and stop by the Polish Museum of America. The nation’s largest institute of Polish-American history houses galleries of Eastern European art and exhibits that feature Pope John Paul II and Revolutionary War hero Casimir Pulaski. Farther down the road are heralded eateries such as Staropolska and Andy’s Deli that serve seasoned sausages and smoked cheese.
Afternoon
Stop by St. Hyacinth Basilica, the heart of Chicago’s Polish-Catholic community. Your group will be stunned by the enormous mural dome and Baroque architectural touches of the 120-year-old church, and parishioners can tell the story of 13th-century Krakow priest St. Hyacinth.
Evening
After dinner, enjoy a Broadway in Chicago performance in the Downtown Theater District. Historic venues such as the Oriental Theatre and Cadillac Palace Theatre stage lavish musicals and other productions; generous group packages are available. Conclude your trip with a fireworks display at Navy Pier, a lakefront visitor magnet brimming with shops, restaurants and attractions like the giant Centennial Wheel.