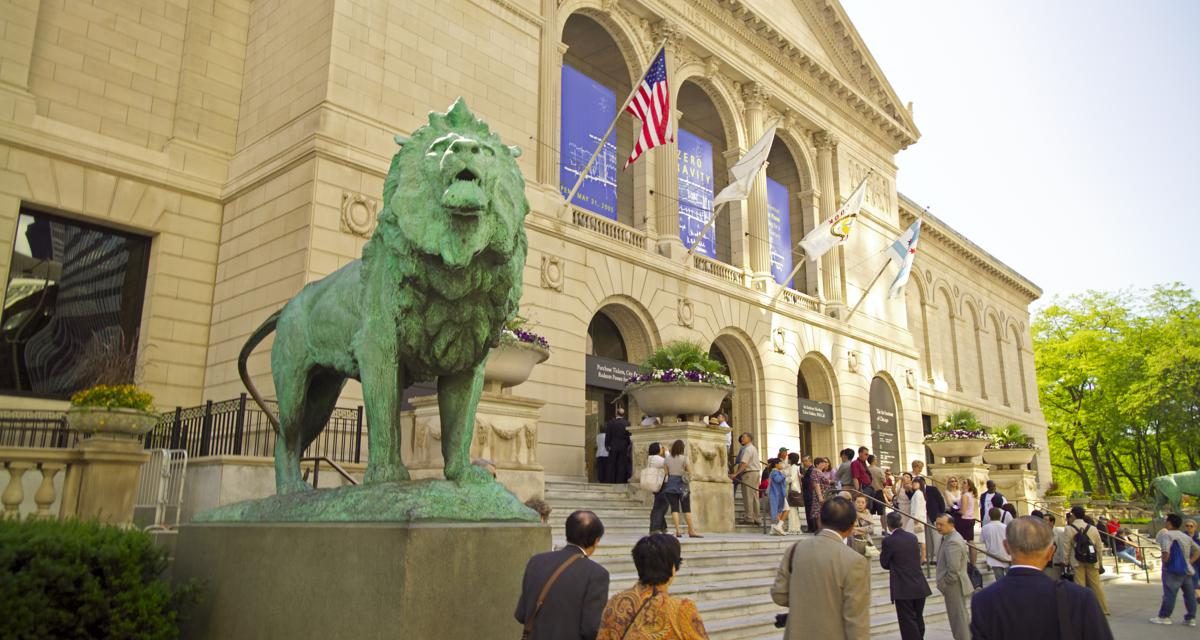 Dispersed throughout Chicago’s metropolitan area are world-class museums featuring collections of science, art and history, all waiting to be discovered

No group trip to the Chicago area is complete without a visit to some of its finest museums. Art aficionados, history lovers and nature fans alike will embrace exhibitions on all of their favorite topics and learn something along the way. Many of these museums double the fun by offering private group tours, live shows and evening events, which should be scheduled online or via phone well in advance. Enjoy a visit to some of the following museums during your next trip to the Chicago area. 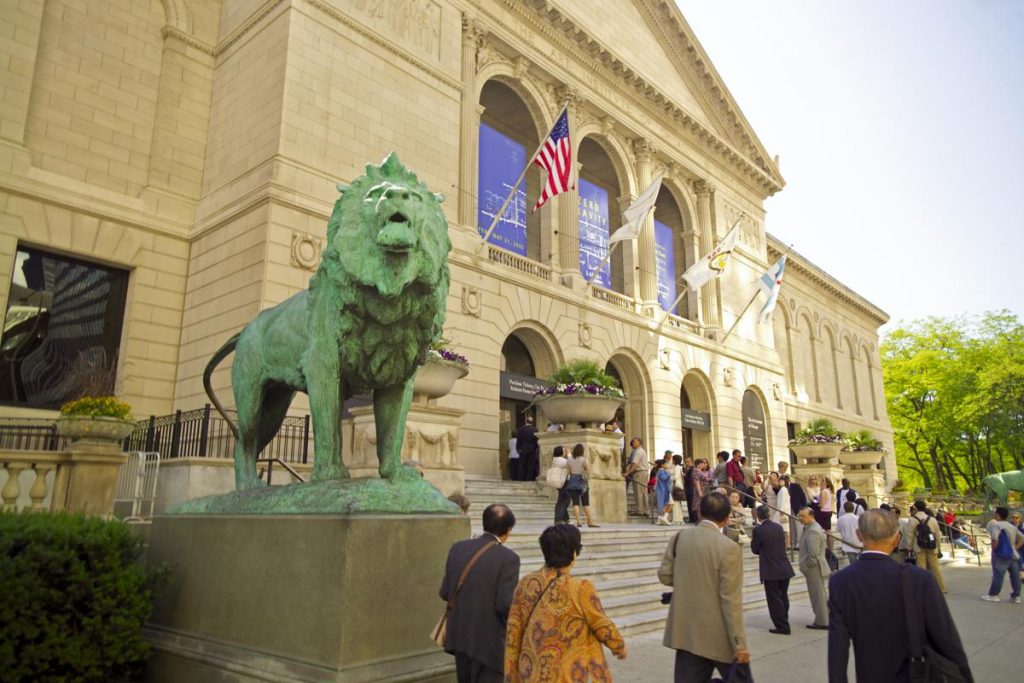 The Art Institute continues to be a Chicago favorite, attracting about 1.5 million visitors each year. Now, the Michigan Avenue museum boasts more art than ever before, as the addition of its Modern Wing brings it to a whopping 1 million square feet. Visitors will be entranced by 11 massive collections of 300,000 paintings, sculptures, statues, photos and print drawings produced by the greats, such as Salvador Dalí, Georgia O’Keeffe, Claude Monet and Pablo Picasso. Marvel at the African sculptures, Asian pottery, medieval armor, classical European paintings and contemporary American drawings. Special exhibitions are scheduled throughout the year.

Visitors have the opportunity to purchase their own masterpieces at the museum’s gift shop. Conveniently located next door to the Art Institute is lively Millennium Park, downtown Chicago’s great gathering place.

Visit the Adler Planetarium to experience the wonders of the universe without ever leaving planet Earth. Part of downtown Chicago’s Museum Campus, the Adler boasts 600,000 square feet of exhibitions featuring breathtaking models of planets, stars, moons and rockets. Tour the museum with your next group to see Captain James A. Lovell Jr.’s space adventure in Mission Moon, astronomers’ massive telescopes in Through the Looking Glass, and the evolution of the solar system and surrounding constellations.

In addition to viewing exhibitions, groups can observe star formations and contemplate the universe’s next addition with Adler’s original showings of Cosmic Wonders and Planet Nine in two giant domed theaters. Other planetarium favorites include the Doane Observatory, where you can find the Midwest’s largest telescope open to the public, and Community Design Lab, where you can develop engineering skills for new products. Finish the tour with tasty sandwiches and scenic views of Lake Michigan from Galileo’s Cafe, a great space for special occasions. 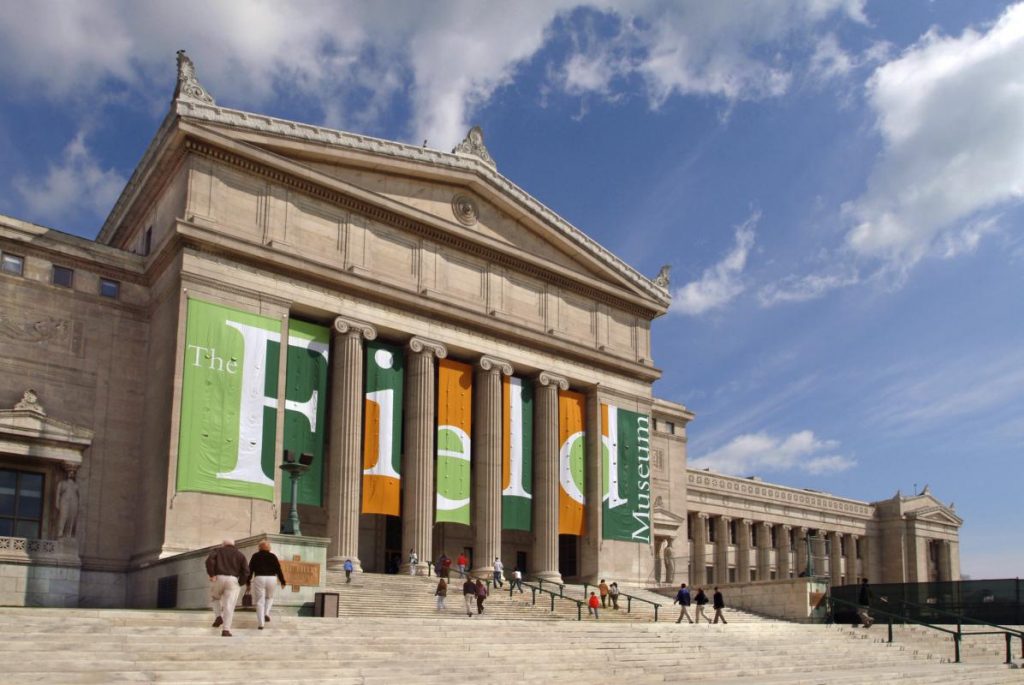 The Field Museum, part of downtown Chicago’s Museum Campus, showcases everything from dinosaurs to diamonds.

The Field Museum, located on the lakefront Museum Campus in downtown Chicago, offers a vast selection of natural history exhibits and noteworthy standalone attractions. Groups can discover a DNA lab, majestic wildlife dioramas, formidable dinosaur exhibitions and halls filled with colorful gems, not to mention the cultures of Africa, Asia, the South Pacific and other parts of the world. The Grainger Science Hub awaits all who wish to get their hands on different specimens and ancient artifacts. In spring 2019, visitors will be able to get up close and personal with a newly enhanced SUE the T. rex in Stanley Field Hall. For now, you can observe the dinosaur’s skeleton refurbishment through a viewing window and meet her replacement, a 122-foot-long titanosaur, the largest dinosaur known to humanity.

When scheduling your trip, book tickets to see one of the Field Museum’s interactive 3D shows. The museum frequently shows the evolution of the T. rex, journeys through ancient Egypt and London’s Natural History Museum after dark. Take advantage of the shopping and dining opportunities at the end of your trip.

Besides learning about prominent figures, groups touring the DuSable will experience the Civil War era and African American soldiers’ deployments to seven wars. Other exhibits will take them on a soulful journey through the creations of jazz, blues, funk and hip-hop in Chicago as well as the city’s architectural and art movements.

Educational games and gifts are available for purchase at the museum’s shop, and Hyde Park boasts countless dining options.

For a venue that just opened in 2017, the American Writers Museum is already racking up quite a reputation. Publications like USA Today and Fodor’s have ranked the museum as a top attraction given its interactive galleries comprising modern exhibitions.

Located on Michigan Avenue in downtown Chicago, the American Writers Museum is the perfect place to learn about great writers, from Elizabeth Cady Stanton to Tupac Shakur. Among the museum’s permanent exhibits are the 80-foot-long Nation of Writers main gallery of over 100 American selections, the Story of the Day workshop equipped with typewriters and the Children’s Literature Gallery for young readers. The Readers Hall event and exhibition space is filled with popular literary works, wall displays and digital kiosks. Visitors will also encounter the Chicago Gallery, which focuses on the Windy City’s own literary geniuses – think author Lorraine Hansberry and newspapermen Roger Ebert and Mike Royko.

The Oriental Institute of the University of Chicago

Another Chicago favorite is the Oriental Institute Museum, located on the University of Chicago’s campus in Hyde Park. For almost 100 years, the museum has exhibited archaeological material from the ancient Middle East. The artifacts are featured across eight galleries according to place of origin. Included in the collections are Assyrian King Sargon II’s Lamassu, a 40-ton human-headed winged bull; Egyptian mummies and statue of King Tut; Mesopotamian pottery; and monumental sculptures from Anatolia, just to name a few of the treasures on display. The Oriental Institute welcomes tour groups and holds public lectures and events.

The Museum of Contemporary Art (MCA) provides a remarkable selection of more than 5,000 art objects in rotating displays. Tour the museum to see fascinating artworks, such as a twin DNA sample, paintings encapsulating life after World War II, half-human figures and installations engaging with pop culture references. The MCA encourages audience participation by inviting them to discuss artists’ unveilings in the Commons, an ornately designed room opened for the museum’s 50th anniversary. Complete the experience with a trip to Marisol, the art space’s modern, street-level restaurant. Souvenirs and gifts are available at the MCA Store.

Museum of Science and Industry 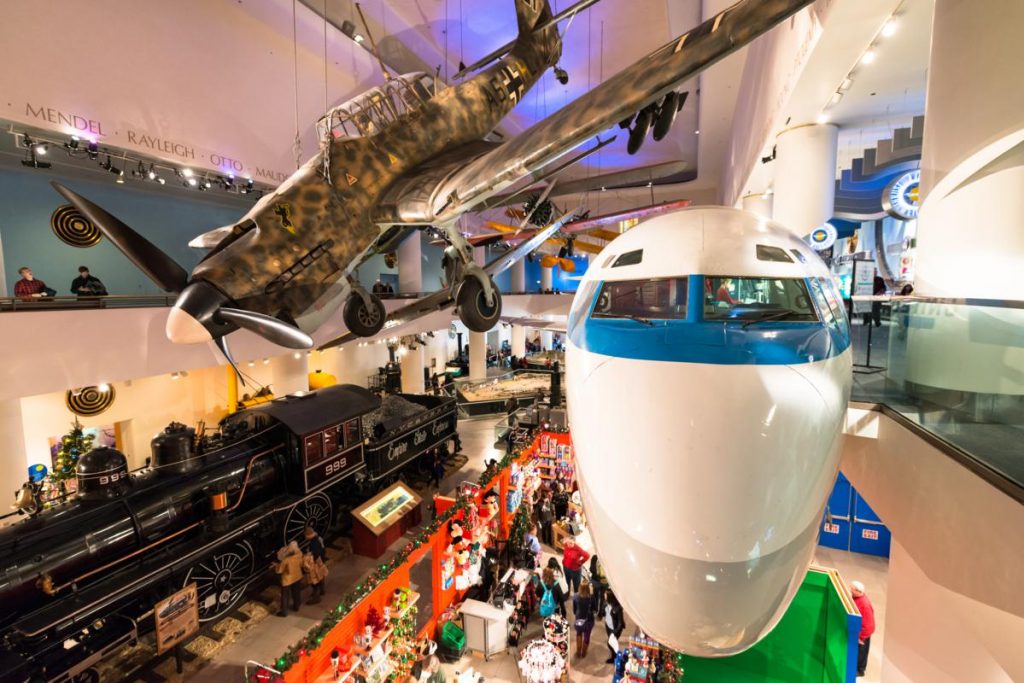 In the Museum of Science and Industry’s Transportation Gallery, visitors can climb aboard a Boeing 727.
Credit: Nick Ulivieri/MSI

Known as the largest science museum in the Western Hemisphere, Chicago’s Museum of Science and Industry (MSI) invites groups to explore and ask questions. Enter this grand building and encounter endless possibilities, from immersing yourself in Science Storm’s towering tornado to examining trains and planes in the transportation exhibit. You can also navigate modern farming methods and meet baby chicks, the museum’s most adorable experience.

MSI makes visiting easier by offering group tours. With a guide, you can tour the U-505, the United States’ only restored German submarine from World War II, or a replica coal mine. In addition to marveling at such iconic exhibits, see one of the museum’s high-definition shows in its five-story Giant Dome Theater. The theater can take you on journeys through the Amazon Rainforest and advancements in technology. Afterward, shop and dine at any of MSI’s stores and restaurants. 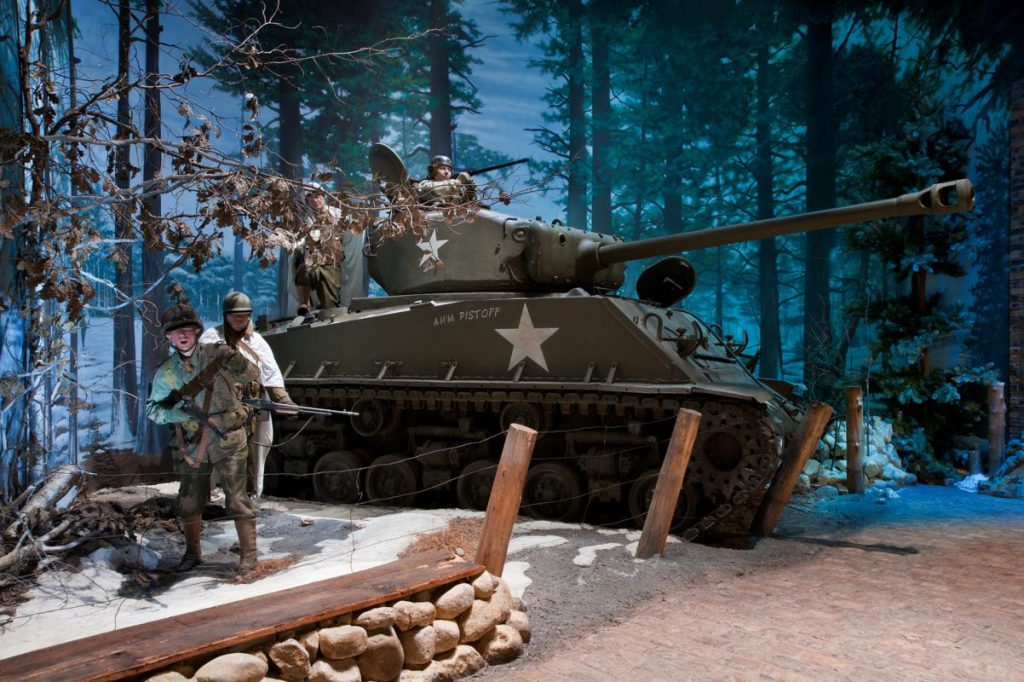 Pay tribute to our military at the First Division Museum in Wheaton’s Cantigny Park, about an hour west of Chicago. The museum transports visitors to the frontlines of global wars through interactive exhibitions and walk-through dioramas. See the recently renovated First in War gallery, where you’ll witness life as a 1st Infantry Division soldier in World War I trenches, along Normandy beaches and in the Vietnam jungles. The museum’s second major exhibition is a new 2,500 square-foot gallery entitled Duty First, with missions extending from the 1970s onward and battles using state-of-the art technology. Outside, young visitors are welcome to climb on the massive display of U.S. Army tanks.

Cantigny’s 500 acres also include a visitor center, a 27-hole golf course, luscious gardens and McCormick House, a historic museum that was once home to Colonel Robert R. McCormick. Famed as the editor and publisher of the Chicago Tribune, McCormick served with the First Division during the Battle of Cantigny (France) in 1918. Start your day with a bite to eat, some shopping and a short introductory film at the visitor center. 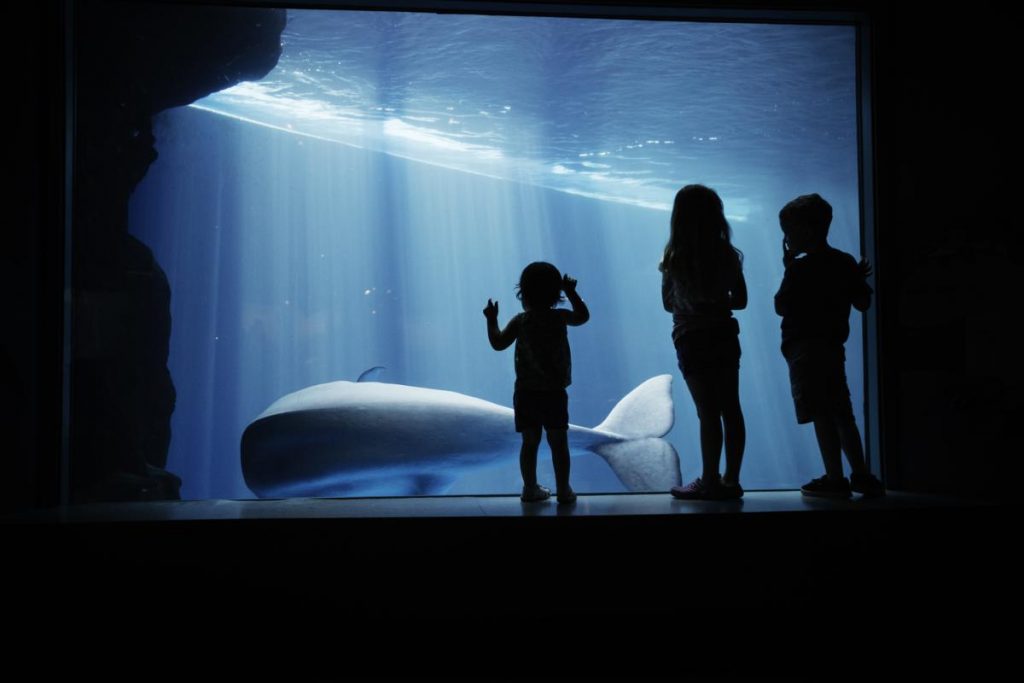 If you are fascinated by all that lies under the sea, then this fish-friendly attraction neighboring the Adler Planetarium and Field Museum on the Museum Campus is the place for you. Start with the main floor’s Amazon Rising,Wild Reef, Caribbean Reef and Waters of the World to see seahorses, crabs, stingrays, lamprey, sharks and Nickel, a rescued endangered sea turtle. Throughout the aquarium, you will encounter the Shedd’s pledge to protect animals and ecosystems with its commitment to reducing plastic pollution. Sprinkled among the exhibits is a collection of sea life constructed from trash deposited on seashores.

On the lower level, visitors can observe penguins in the Polar Play Zone. See baby sea otters frolicking underwater as well as the Abbott Oceanarium’s dolphins, beluga whales and sea lions interacting with their trainers during feeding sessions and live shows. Find souvenirs at the gift shop and grab a bite to eat at the deli or cafeteria on the lower level.

Step into rooms filled with vibrant artwork spanning 3,000 years at the world’s largest Mexican art museum. Located in Chicago’s Pilsen neighborhood, the free admission National Museum of Mexican Art has around 10,000 artifacts on permanent display, including folk art, sculptures, documents, clothes and photos. Each exhibition tells a different story of the city’s Mexican population, from struggles to immigrate to discussions of identity and inclusion.

Groups can book docent-led tours for an in-depth look at the museum’s offerings. Complete the immersive experience with memorabilia at the museum’s popular gift shop, Tienda Tzintzuntzán (Place of the Hummingbird), which has been referred to as “an exhibition unto itself.” Keep an eye out for special celebrations, such as art and folk music festivals, and Navidad (Christmas) and Día de Los Muertos (Day of the Dead) parties.

Learn about World War II horrors and global humanitarian crises at the world’s third-largest Holocaust museum. Located in Skokie, the 65,000-square-foot building designed by Chicago-acclaimed architect Stanley Tigerman is the site of the Karkomi Holocaust Exhibition. In this gallery alone, visitors will find over 500 artifacts (one of which is an authentic German railcar), photos and video testimonials from local Holocaust survivors.

Groups visiting the museum will also find The Make a Difference! Harvey L. Miller Family Youth Exhibition, where families with children ages 8-12 can develop lifelong skills together. You can also participate in an interactive conversation with holographic Holocaust survivors and get inspired to combat social injustice at the Take a Stand Center on the lower level. Continue conversations on global issues such as race, immigration and ethics at the Take a Stand Lab and Act of Art Gallery.