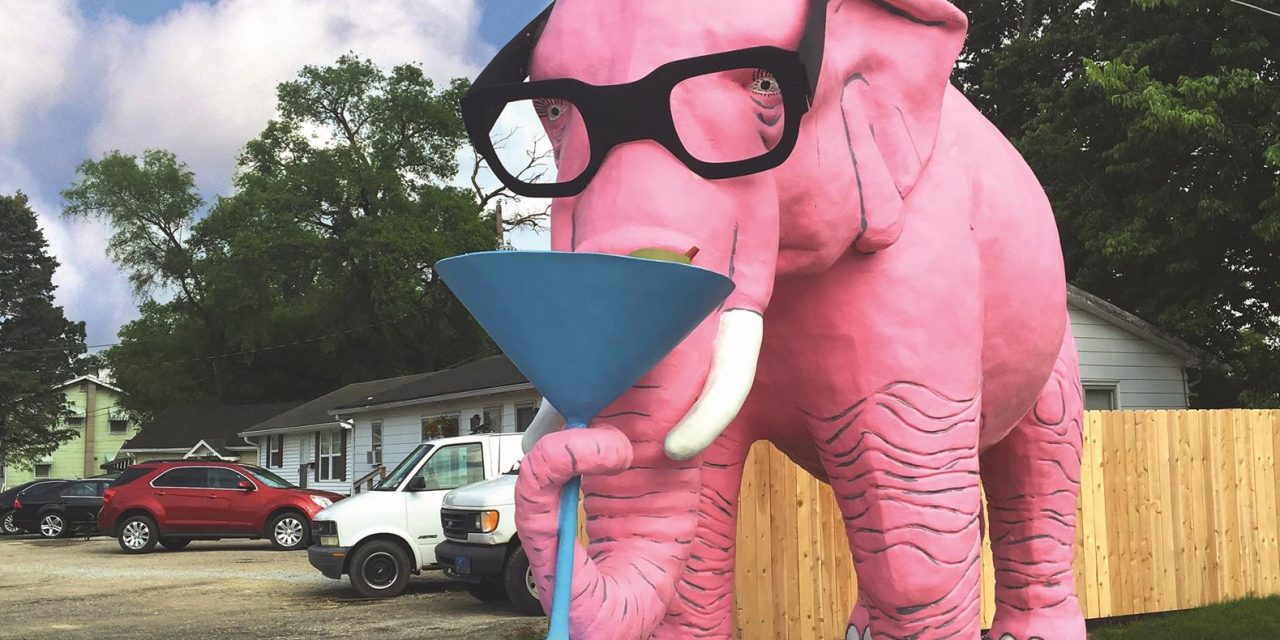 Quirky slices of Americana worth a pit stop

Sometimes, it’s the odd, oversized or just downright strange that generates the most vivid travel memories. The curiosity could be a larger-than-life statue, a freak of nature or another object of wonder that makes us pull over and take a selfie for posterity.

Indiana abounds with roadside marvels, and here are 10 that will intrigue your travelers:

What better mascot for your liquor store than a pink pachyderm holding a martini glass in its trunk? Standing on a flatbed trailer at the entrance to Elite Beverages in Fortville, the bespectacled elephant statue is a manifestation of the early 20th century expression “seeing pink elephants,” used to describe someone who is intoxicated. The elephant, wearing black-framed glasses, appears in parades and can be rented out for other occasions. 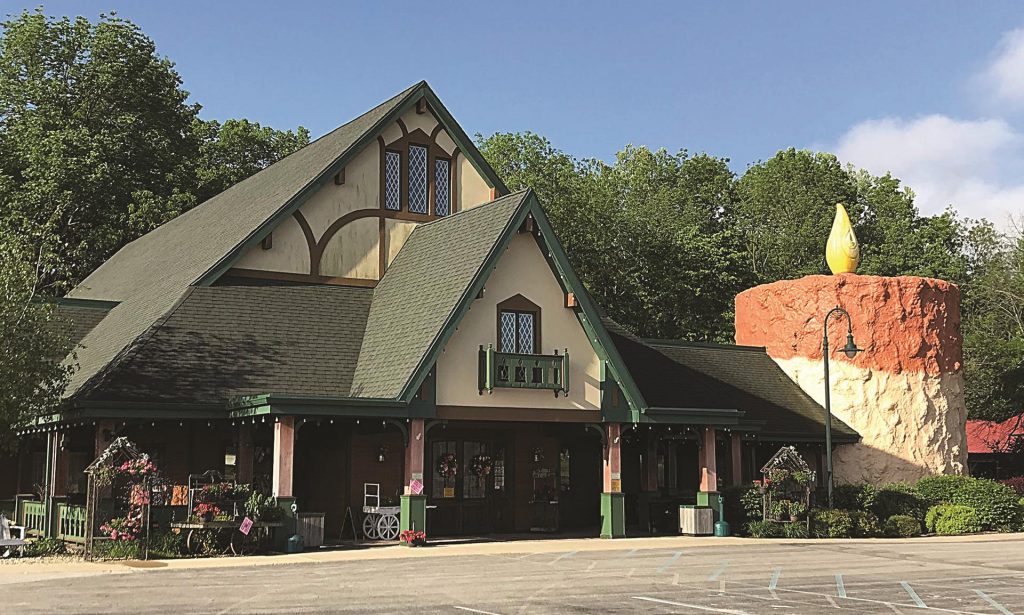 Created in 2006 next to the Warm Glow Candle Outlet store in Centerville, this giant candle has a wick that flickers at night, catching the eyes of motorists traveling along I-70. Dwarfing the store, the towering candle actually is part of the 22,000-square-foot building. Warm Glow is known for its fragrant, handmade, lumpy and bumpy candles; there are more than 75 scents to choose from. The store also sells home decor items, chocolates, gourmet foods and Indiana wines. Nestled in the center is the Stone Hearth Cafe. 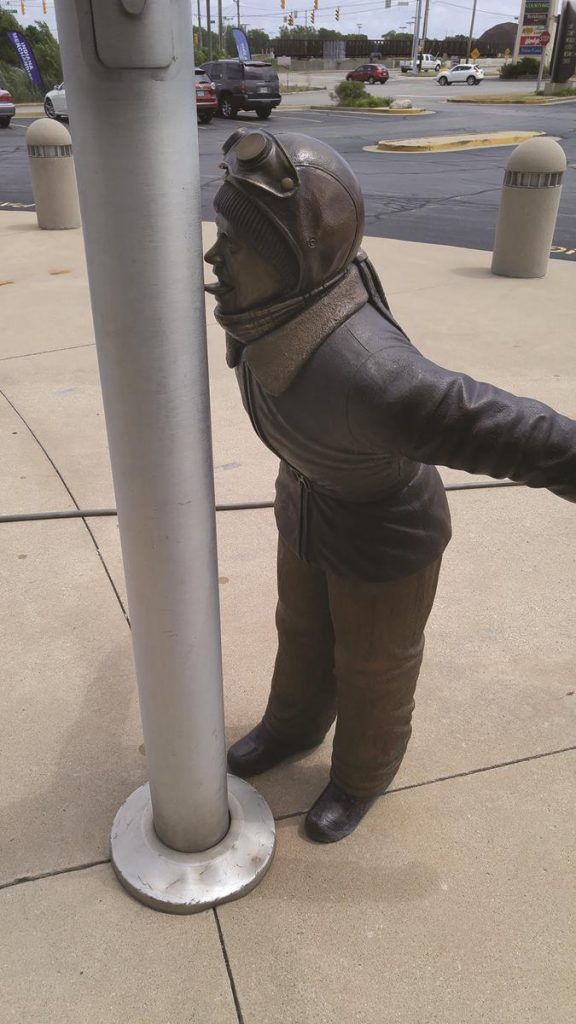 A CLASSIC SCENE FROM A CHRISTMAS STORY, HAMMOND Visit Indiana

Fans of the classic 1983 holiday movie A Christmas Story take glee in posing with this bronze statue at the Indiana Welcome Center in Hammond, home of the South Shore Convention & Visitors Authority. The piece of art replicates the iconic scene in which the character Flick, bundled up for winter, gets his tongue stuck to a frozen flagpole on a triple-dog-dare. During the holidays, the visitor center celebrates the flim’s Northern Indiana setting with “A Christmas Story Comes Home,” a program of activities and exhibitions.

This oversized peach greets visitors to a family-owned roadside produce stand in Bruceville, a fruit-growing area north of Vincennes. As if the 20-footwide peach wasn’t enough to attract customers, a yellow obelisk resembling the Washington Monument stands next to it. Besides selling fresh fruit, The Big Peach farm market (with indoor store) attracts customers with a pumpkin patch, corn maze and other seasonal attractions. Merchandise also includes jams, jellies, fudge, local honey and gift items. Try the peach cider or peach butter.

Housed in a glass-enclosed pavilion in Kokomo’s Highland Park is a pair of oddities. Old Ben, a steer born in 1902 on an area farm, weighed 125 pounds at birth and gained 100 pounds a month, weighing two tons by the age of 4 and topping out at over 4,500 pounds by the time of his death in 1910. He was 16 feet long from nose to tail. Once exhibited by his owners at Indiana fairs and festivals, Old Ben is enshrined in all his taxidermied glory next to the World’s Largest Sycamore Stump. Measuring 12 feet tall, 18 feet wide and over 50 feet in circumference, the stump at one point was used as a phone booth that could hold a dozen or so people. It is estimated to be 1,500 years old by ring count. 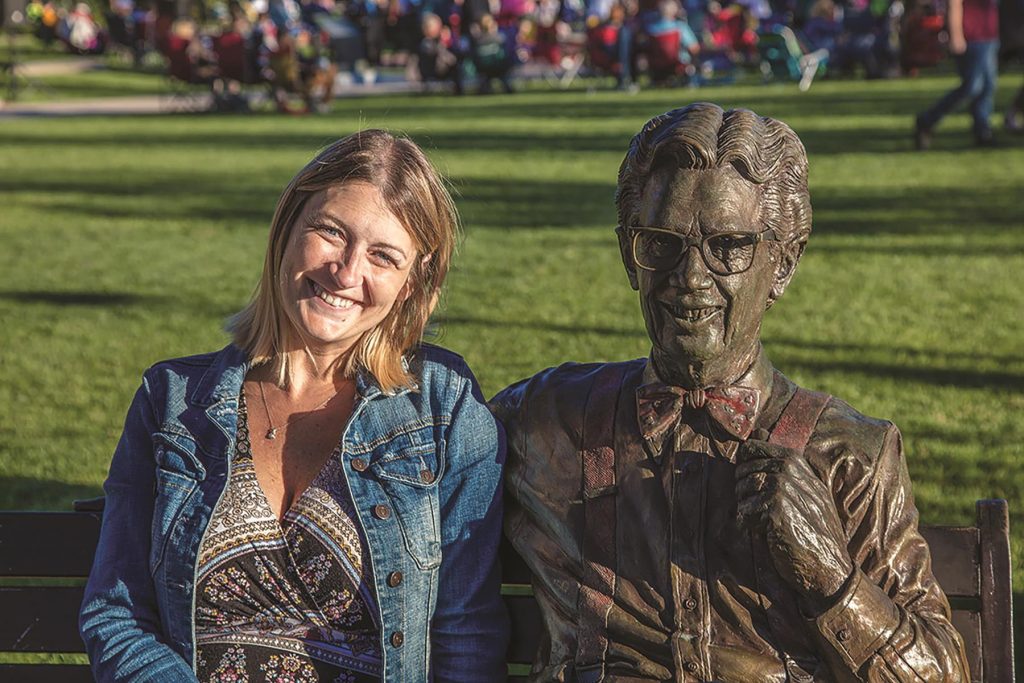 At Central Park Plaza in downtown Valparaiso, popcorn lovers can sit with a bronze likeness of Orville Redenbacher (1907-1995), the popcorn king. The Indiana native, who grew up on a corn farm and built a popcorn factory in Valparaiso, achieved celebrity status when his hayseed image—complete with bow tie and horn-rimmed glasses—appeared on commercials and packages of the popcorn that bore his name. As he said on TV, “You’ll like it better or my name isn’t Orville Redenbacher.” 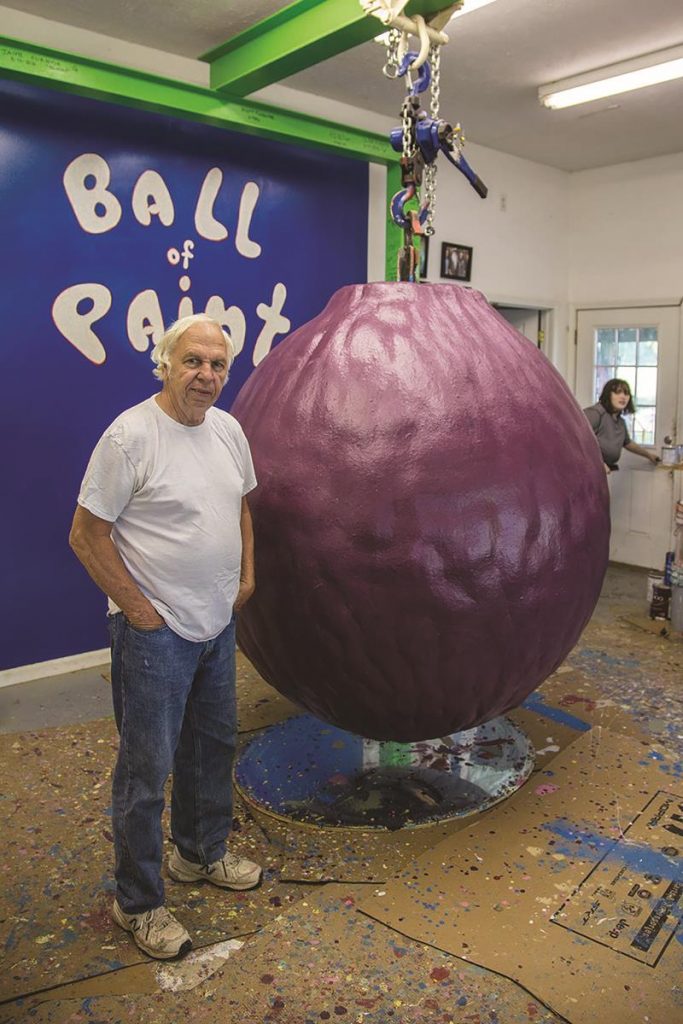 This Alexandria curiosity started as an ordinary baseball in 1977 but has grown and grown over the years as thousands of coats of paint have been slapped on. Visitors who set up an appointment can roll up their sleeves and add a few more layers by contacting Mike and Glenda Carmichael, the creators and owners. Weighing more than 4,000 pounds, the ball of paint has appeared on television shows worldwide and has been recognized by Ripley’s Believe It or Not and the Guinness Book of World Records. The painted sphere resides next to the Carmichaels’ house in a barn built to display it.

Indulge in some Old World charm, enjoy the quilt-pattern garden and catch a glockenspiel presentation in the heart of Berne, a town founded in the mid-1800s by settlers from Switzerland. The plaza’s 160-foottall clock tower, erected in 2010, is a salute to the landmark Zytglogge clock tower in Bern, Switzerland. The northeastern Indiana community, 35 miles south of Fort Wayne, has a large Amish population and is home to Swiss Heritage Village, a 22-acre outdoor museum.

The 800-pound fiberglass statue of a Great Dane dog overlooks U.S. 40 at the Great Dane trailer manufacturing plant in Brazil. Originally constructed in 1953 for a trailer dealership in Orlando, Florida, Champ made his way to Brazil in 2018 after having stood guard since 2002 at Great Dane’s corporate office in Savannah, Georgia. The 17-foot-tall statue rises from a three-foot-high base.

Saint Anne Shell Chapel This tiny chapel is the oldest of several shrines on the leafy grounds of Saint Mary-of-the-Woods College, a small Catholic school located 10 minutes from downtown Terre Haute. What makes the 1875 landmark unique are the shimmering walls embedded with iridescent shells gathered from the nearby Wabash River by the school’s Sisters of Providence.

The backstory: In 1843, Blessed Mother Theodore Guerin, head of the Sisters of Providence, and another nun were sailing back to America after a visit to France when their ship hit rough weather. Fearing it would capsize, they prayed to Saint Anne, patroness of sailors and protector from storms. They made it safely to port and, in the saint’s honor, had a log chapel built the next year. But when the logs started rotting, a decision was made to build the stone chapel that exists today. Some of the shell mosaics depict scenes of the stormy night at sea. Beside walls completely covered with shells, there are two stained-glass windows with shell and coral designs.