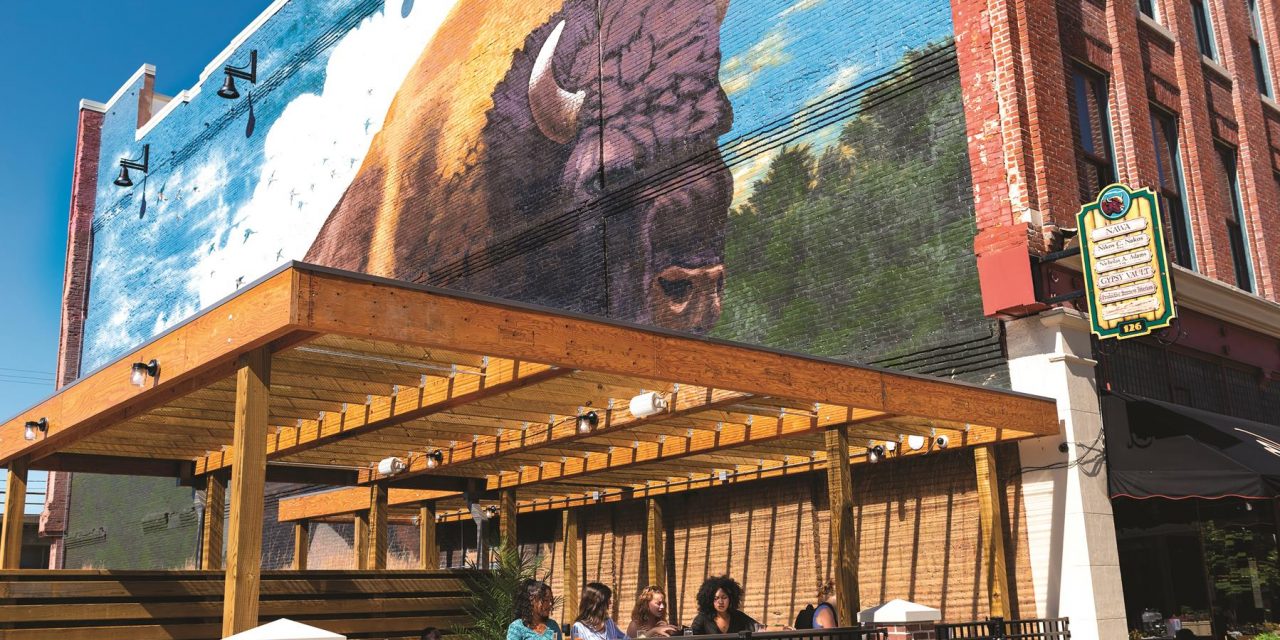 Barn quilts, murals and sculptures reflect Indiana’s creative side and mirror the heritage of local communities

Experiencing art in an outdoor setting is the perfect social distancing activity, and the cities, towns and rural areas of Indiana literally serve as open-air museum galleries showcasing artistic creativity on a large scale. Tour planners looking to craft a safe, healthy itinerary have a variety of art-themed driving and walking trails to consider. Their travelers will revel in the fun photo opportunities. And the viewing is free.

Barn quilts—murals of quilt-block patterns painted on plywood—adorn the sides of barns, homes, garages and commercial buildings in several Indiana counties, adding splashes of color to already beautiful landscapes. The patchwork pieces celebrate craftsmanship, agriculture and Hoosier hospitality. Just as traditionally sewn quilts are one-of-a-kind works of domestic art, no two barn quilts are alike. Maps for self-guided tours stitching the sites together are available from counties with organized trails.

The Marshall County Barn Quilt Trail in Northern Indiana spotlights more than 75 patchwork murals, including some in downtown Plymouth and Culver. The trail is divided into four geographic loops, each taking one to two hours to drive from the Marshall County CVB office in Plymouth. 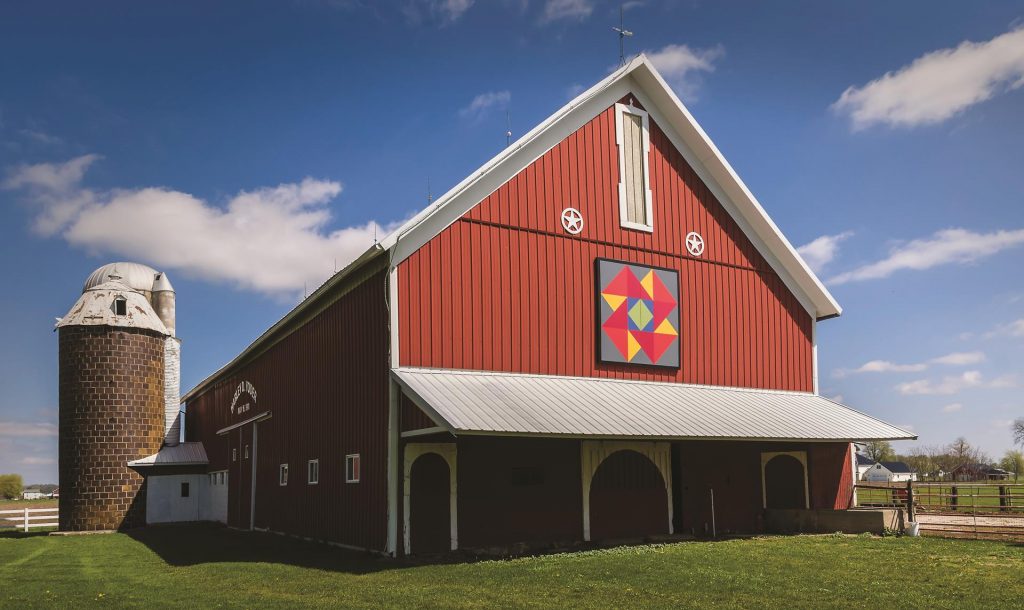 Groups hitting the backroads of Northern Indiana’s Amish Country will find more than 30 unique pieces of art along the LaGrange County Barn Quilt Trail, which connects seven communities. At Eash Sales in Shipshewana, a home decor store, travelers can buy their own barn quilt art to take home and hang up. Emblazoning the sides of buildings in Shipshewana is yet more eye candy—a collection of 16 murals done in 2014 by the Walldogs, a group of mural artists from around the world that every year transforms a town with larger-than-life paintings depicting local history.

The nostalgia-laced murals—showing influential townspeople and businesses of the past—can be seen on a walk or drive around the town, which brims with shops for the tourist trade. Shipshewana is also the home of the Midwest’s largest flea market.

Shipshewana was one of 11 towns where a new masterpiece of street art was unveiled in September of 2020 during Make It Your Own Mural Fest, a project between the Northeast Indiana Regional Partnership and Arts United of Greater Fort Wayne, Inc. In 11 days dotted with festivities, regional, national and international artists enhanced road trip opportunities in 11 northeastern Indiana counties, contributing one permanent mural to a building in each county. Besides Shipshewana, towns getting a mural included LaGrange, Fort Wayne, Geneva, Warsaw, Huntington, Garrett, Albion, Angola, Manchester and Bluffton.

Fort Wayne boasts its own collection of public art. Downtown, a dozen or so colorful murals brighten streets and span whole alleyway walls, and another 15 acre found in other parts of Indiana’s second-largest city. In addition, Fort Wayne is always adding innovative new sculptures that represent its past and future, and even the sculptural bike racks are eye-catching.

Kokomo also boasts gussied-up alleyways. Thanks to the Greater Kokomo Downtown Association’s All Alleys Lead to Art Initiative, the historic core sports pedestrian alleys brimming with art in a variety of mediums, including sculpture, video, light, sound and live performances.

Each outdoor gallery has its own atmosphere. The revitalized city center, moreover, dazzles visitors with vibrant murals on the sides of buildings (even bridges). In addition, the city offers the self-guided Kokomo Sculpture Walk, which features nine large-sale sculptures, guiding visitors along trails and waterways.

Groups touring Eastern Indiana can feast on street art, from historical to whimsical, found along the Richmond/Wayne County Murals Trail. Most of the 80-some murals are in downtown Richmond and the Richmond Historic Depot District; a few beautify Main Street in Cambridge City, a mecca for antique hounds. One favorite, on the exterior wall of the Richmond fire station, depicts an early 1900s scene of firefighters making a dramatic rescue. Some murals, such as those showing music legends Hoagy Carmichael and Louis Armstrong, recall Richmond’s place in jazz history as the home of Gennett Records studios, where the earliest jazz recordings were made from 1916-1934. In 2013, after an invasion by mural artists from as far away as Italy, Richmond was recognized by the Paint Quality Institute as one of America’s Prettiest Painted Places.

Bloomington, a hotbed of art and culture and home of the University of Indiana, is another city that takes pride in its exterior-wall murals. The Bloomington Mural Trail shows off more than 40 of them, in locations ranging from the Maple Street Bridge to the Hyatt Place hotel, which displays five murals, and the everchanging collection at Artisan Alley.

Walking tours of the Ohio River town of Aurora are highlighted by exquisite 19th and 20th century architecture and the Windows of Aurora community art project. Painted vignettes of everyday activities in the early 1900s decorate more than 90 previously boarded-over windows and doors in the downtown area, which is listed on the National Register of Historic Places. Many paintings depict occupations—tailor, milliner, coffin maker, shipbuilder, brewer, distiller, butcher, blacksmith and leather tanner—while others show scenes like a ferry plying the river. The primary artists are members of the Southeast Indiana Art Guild. Tours led by a local artist/muralist can be arranged for groups. 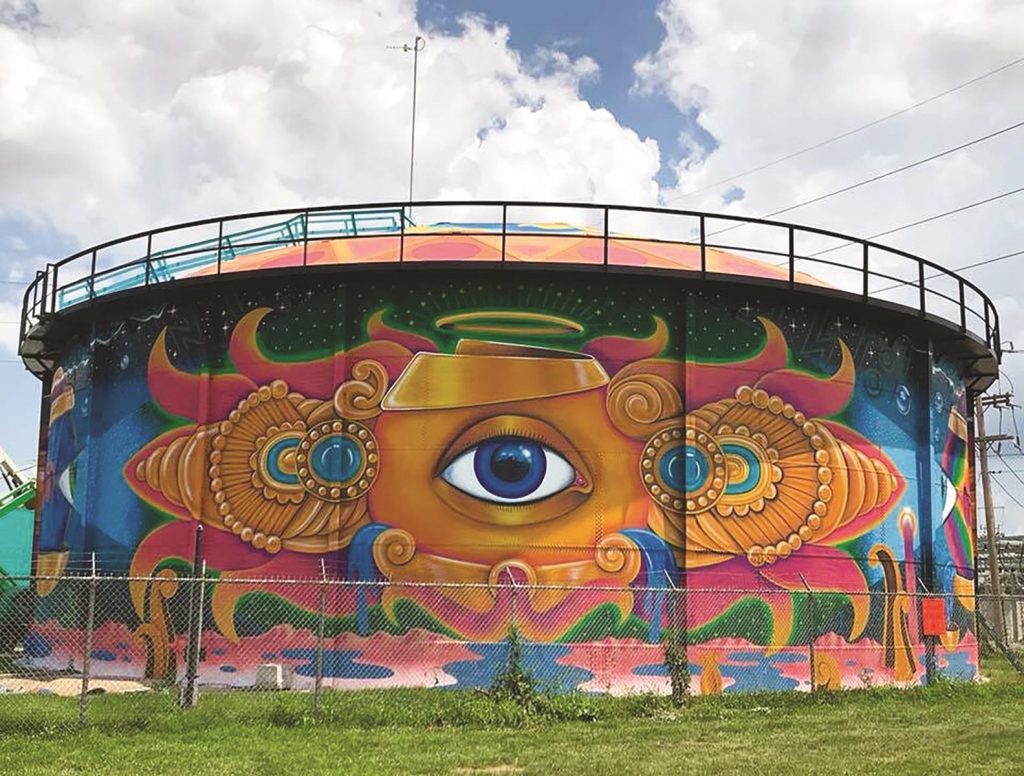 Jeffersonville, another Ohio River city, bubbles with a burgeoning arts scene centered around the NoCo Arts & Cultural District (NoCo is short for “north of Court” avenue), part of a downtown redevelopment area. Creative crosswalks, sculptural bike racks and painted utility boxes have transformed the city into a beautiful canvas of color. Most impressive is the massive, color-splashed mural (Perpetual Perception, done by local artist Wilfred Sieg III in 2018) covering every surface of a decommissioned water tank. More murals can be found along the Jeffersonville Flood Wall and in nearby downtown New Albany.

The Garfield Trail in east-central Indiana’s Grant County counts 14 statues of the comic strip cat in captivating costumes or funny situations. Glorifying parks, public buildings and restaurants, fiberglass figures (about five feet in height) of the orange, lasagna-eating cat can be found in Marion (with five), Fairmount, Gas City and six other towns in Grant County, where Garfield’s creator, Jim Davis, was born and raised. The cartoonist’s studio is a short drive from Fairmount, his hometown. Statues on the trail include Bookworm Garfield at the Marion Public Library, Duffer Garfield at Marion’s Arbor Trace Golf Club and Scream for Ice Cream at Ivanhoe’s Drive-In in Upland.

In Carmel, just outside of Indianapolis, the Carmel Arts and Design District displays life-size bronze statues by world-renowned sculptor J. Seward Johnson Jr., often referred to as the Norman Rockwell of American sculpture. His colorful “Man-in-the-Street” creations show people going about everyday life. Examples include a gray-haired businessman seated on a bench reading a newspaper, a father teaching his daughter to ride a bicycle and a big sister tying her younger sister’s shoes. Everyone likes the re-creation of an iconic 1945 photo that captures a sailor kissing a nurse in a euphoric moment celebrating the end of World War II. Just south in Indianapolis is the Virginia B. Fairbanks Art & Nature Park: a 152-acre cultural campus where you will find Joep Van Lieshout’s iconic Funky Bones.

Visitors to Sculpture Trails Outdoor Museum, tucked in the woods outside of Solsberry in Greene County, can admire artwork and commune with nature at the same time. A peaceful walk, guided or self-guided, reveals more than 100 sculptures by local and international artists. Some of the works are off the paths, nestled in the hillsides in harmony with their settings. Admission is free.