Leisure Group Travel’s annual Industry Forecast Issue includes a revealing interview with Peter Pantuso, who has guided the American Bus Association for over two decades. He shares his thoughts about national park fee hikes, the technology revolution, the importance of face-to-face interaction in an increasingly digital world and the January 2018 ABA Marketplace in Charlotte, North Carolina.

If you’ve been wondering about the viability of printed brochures, see what major tour operators say about how they balance print and digital in “The Evolution of the Travel Catalog.” Also included in the magazine’s Industry Forecast section are the results of Leisure Group Travel’s Group Intentions Survey, which paints a picture of today’s group travel landscape – see how your company compares. And if you’d like to make a boatload of money next year in the travel business, see the tips offered by our guest columnist, marketing guru Mark Marchev.

The Central Region feature spotlights living history museums from Iowa to Ohio. Among the 10 open-air attractions described are Old World Wisconsin, Indiana’s Conner Prairie and Living History Farms near Des Moines. Group-friendly state park lodges in West Virginia, Georgia and Arkansas comprise the South Region feature, while a different kind of lodge is the focus in the East Region report on ski resorts in Vermont, Maine, New Hampshire, New York and Pennsylvania. “Footnotes at the Foot of Europe,” the issue’s international entry, suggests Tangier, Morocco and the British colony of Gibraltar as excursions on Iberian Peninsula itineraries. 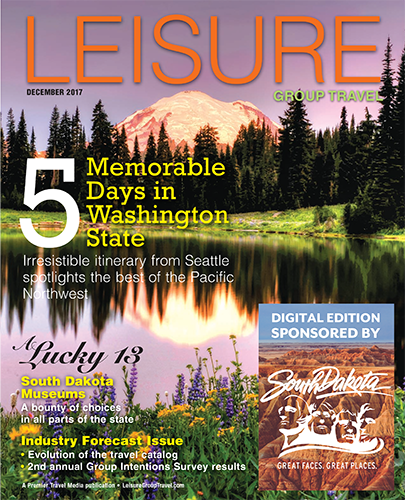