Central Europe by Rail at During Christmas Season 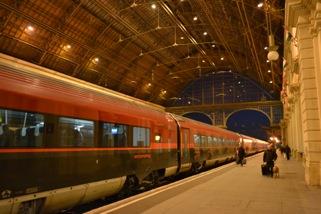 Now that the Christmas season is over, it’s time to plan for next year’s holiday outing. How about a group trip by rail in Austria, Slovakia and Hungary—the former Austro-Hungarian Empire? Sprinkle in visits to the region’s vibrant Christmas markets and you’ve got a winning combination.

Riding the rails in Europe is a fun, hassle-free way to travel. A big plus is that you get to see the landscape as you travel, and there are no security checks, turbulence or seat belts to worry about. For groups, rail cars hold as many as 50 passengers, and more cars can be added if needed.

Eurail, the umbrella group over several sellers of Eurail train passes for 24 European countries, offers help and special group discounts that can make your trip easier to plan and less costly. 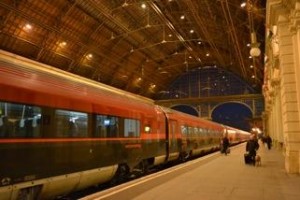 Catching a train in the former Austro-Hungarian Empire is easy. (Don Heimburger photos)

Start your group trip in Vienna, where the Christkindlmarkt is large and inviting, and the city’s attractions are known worldwide. Visit Belvedere Palace, where you’ll find the largest collection of Gustav Klimt paintings anywhere, and take in the unique Christmas market while there. Also visit the Stephansdom in the center of the city. The church is a world-famous cultural heritage site, a national emblem of Austria and a symbol of Austrian identity. The first structure to occupy the site was a Romanesque church, which was replaced by a larger Romanesque basilica in 1147. A major fire in 1258 destroyed the basilica, and construction of the present Gothic cathedral began in the early 14th century.

All around the Ringstrasse, a street that rings the core of this imperial city, you’ll find attractions such as the prestigious Vienna Opera House, Parliament, the Rathaus (where the largest Christmas market takes place) and numerous restaurants, coffee shops and hotels. Take in a Vienna Boys’ Choir concert in their new concert hall in Augarten Park.

A little less than three hours away by train is Salzburg, a popular Austrian city where filming of The Sound of Music took place. Its romantic Christmas market, centered in Cathedral Square with its narrow winding cobblestone streets, offers hot mulled wine, grilled sausages, lebkuchen (gingerbread) and other Austrian foods and hand-made gift items.

Plan a visit to Mozart’s birthplace and have a meal at one of the many restaurants that serve delicious beer. Salzburg is a beer town, with a history of more than 500 years of brewmeisters. Try Die Weisse at Rupertgasse 10 for an evening of food, fun and a frothy brew.

A funicular will whisk your group to the top of the mightiest fortress in Central Europe, the Festung Hohensalzburg, built in 1077. The interior of the fortress was recently renovated and is looking good for being nearly 950 years old. 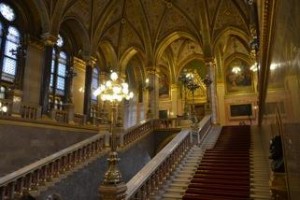 After a six-hour ride by train, your group is in Budapest, one of the most beautiful cities in Europe, visited by nearly three million tourists annually. This World Heritage Site is the home of the Buda Castle District, Hungary’s Parliament building and many important museums. Forbes magazine ranked the city as “Europe’s 7th most idyllic place to live.”

Plan to visit Matthias Church, one of Budapest’s most important churches. The coronation of many of Hungary’s kings occurred here, and the church is home to important tombs and ecclesiastical treasures.

In Heroes Square, the biggest and most impressive square in Budapest, stands the Millennium Monument, with archangel Gabriel on top, holding the double cross of Christianity and the Holy Hungarian Crown. The square features statues of the leaders of the seven tribes that founded Hungary in the 9th century and other figures in Hungarian history.

Also see the Chain Bridge, the Hungarian capital’s first bridge, and plan a soothing group swim session at the famous Szechenyi Baths, where the water is a constant 90 degrees.

SIDE TRIP TO KOSICE, SLOVAKIA 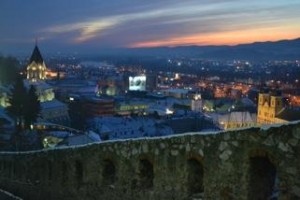 From Budapest you can take a short train ride to visit pretty Kosice, the European Capital Culture of 2013. It has a colorful Christmas market in the downtown area that comes alive in the evening. Check out St. Elizabeth’s Cathedral, considered to be one of the most beautiful Gothic structures in the world.

Your next stop on the journey is Trencin, a small Slovakian town founded as early as the 11th century. Trencin Castle is worth a visit, and a festive Christmas market brightens the old city during Advent.

Our last train stop is Bratislava, which dates back to pre-Roman times. The hillsides surrounding the city have been home to vineyards for centuries, and Bratislava has been the home to Celts, Romans, Germans, Hungarians, Jews and Slovaks, giving it an impressive array of architecture, languages and cuisine. 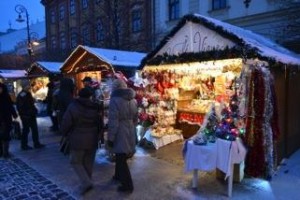 Your group will want to visit Bratislava’s many Jewish points of interest, including the Museum of Jewish Culture, as well as the city’s unique “UFO” bridge that crosses the Danube, Bratislava Castle and St. Martin’s Cathedral.

Bratislava Christmas market? Yes, and the gluhwein and sausages make for a tasty meal anytime of the day or night. The Christmas market here has grown through the years to about 100 vendor stalls selling a variety of foods and hand-made items.

A variety of excellent restaurants, an abundance of palaces, friendly people and numerous historical attractions make this city a fitting end to your group journey through Central Europe at Christmastime.

The Eurail Global Pass is the original classic Eurail Pass, allowing travelers to explore as much of the continent as possible, valid on the national railways of 24 participating European countries.

The Eurail Global Pass is valid in first class with Saver and youth (2nd class) discounts available. There are two types of validities for this pass: customers can opt for a certain number of travel days within a two-month period, or for a pass that is valid until the expiration date.