Sampling Craft Beers and Spirits in the Quad Cities 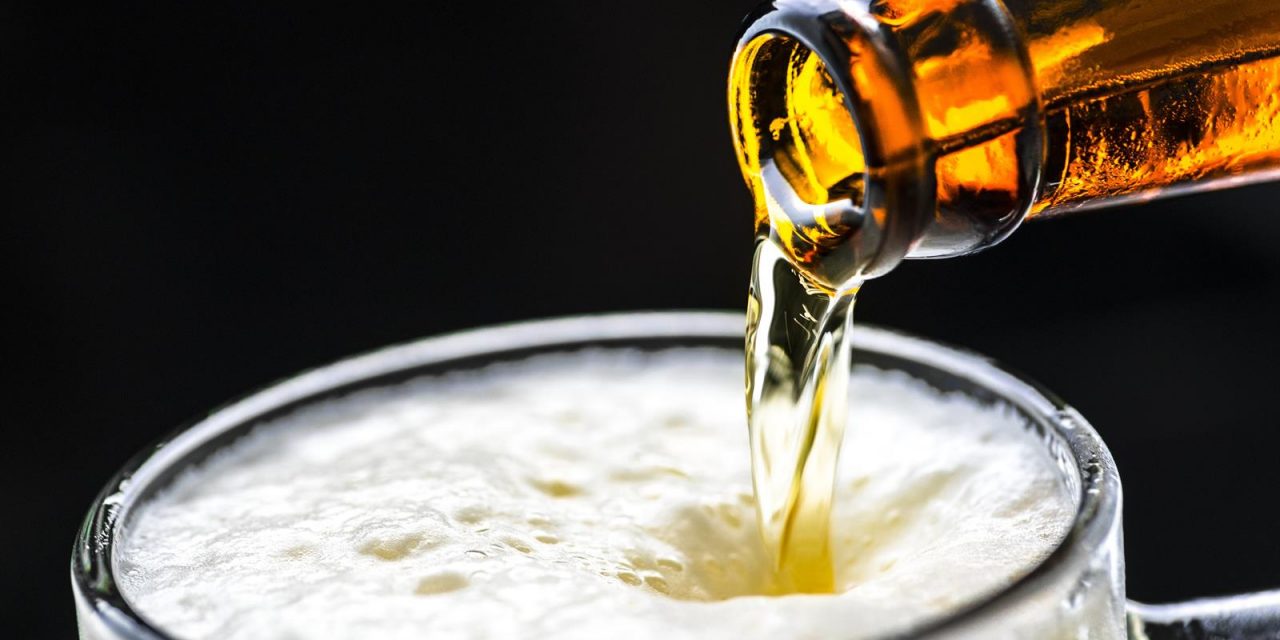 The very fabric of the Quad Cities is shaped by the Mississippi River. Indeed, when people think of this metro area straddling Illinois and Iowa, it’s the river that comes to mind.

Though old industrial river town images may shape some outsiders’ perceptions of the Quad Cities, a complete picture shows a thriving entertainment and dining scene − youthful, dynamic and growing.

On a recent trip to the Quad Cities I indulged my passion for craft beers and discovered some great micro-breweries, all of them close to the river—and with river-related names. I also found a new craft distillery a few miles upriver in little LeClaire, Iowa. (The Quad Cities proper consists of Moline, East Moline and Rock Island, Illinois, and Davenport and Bettendorf, Iowa. Yes, that’s five cities, not four, but I don’t have time to explain.)

My favorite spot in the “Quaff Cities,” probably because of its decor and creative menu, was Blue Cat Brew Pub, a fixture for 19 years in downtown Rock Island’s arts and entertainment zone, “The District.” It claims to be the second oldest operating brew pub in Illinois, after Goose Island in Chicago. Adding to the ambiance are the glass-enclosed brewing tanks behind the bar and hops used as table decoration. A brick wall, once the exterior of another building, sports a vintage Durham Tobacco mural, discovered when the building was being renovated. The pub’s name comes from the river’s blue catfish.

Blue Cat’s dinner menu features such entrees as beer-brined chicken, jalapeno cornbread catfish, apricot walnut pork (made with bourbon) and oatmeal-crusted walleye in orange sauce. The sampler of locally made sausages, served with beans and rice and beer mustard, is a favorite, as is meatloaf in marsala gravy. One of the best sandwiches is a chicken and brie with chutney on the side. Guests wash down these delectables with Big Bad Old Dog English Ale, Off the Rail Pale Ale, Wigged Pig Wheat, and other lagers and ales on tap. The Blue Cat has a group area in its upstairs pub (with billiards, darts and games) and can do beer-pairing dinners. (www.bluecatbrewpub.com) 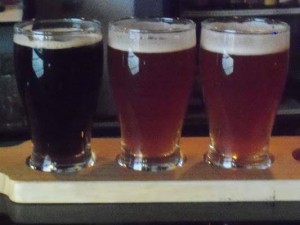 Bent River Brewing Co. opened up as a brew pub in downtown Moline in 1997 and last May unveiled a second location—a distribution center in Rock Island with retail space and a tasting room with full bar. I visited the latter and ordered a flight of four, five-ounce glasses to get a sampling. Bent River’s flagship product, Mississippi Blonde, is close to a typical domestic beer but with more flavor. Uncommon Stout, an oatmeal stout infused with coffee, is the top seller. I also tried the Raspberry Wheat and seasonal Sweet Potato Ale. Other choices include Oatmeal Stout, Jalapeno Pepper Ale and Paddlewheel Pale Ale. Tours of the bottling plant are available.

No food is served at Bent River’s Rock Island location, but it can be brought in. The Moline pub offers a full menu, with seasonal dining in the beer garden. The name Bent River refers to the Mississippi’s change of direction as it takes an east-west path at the Quad Cities. (www.bentriverbrewery.com) 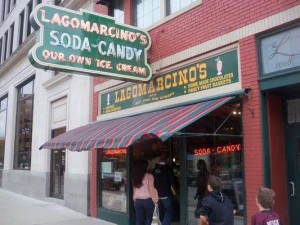 I can’t mention downtown Moline without recommending a visit to Lagomarcino’s, a local institution. No, they don’t have beer, but you can get a root beer at this third-generation soda fountain and candy shop, a slice of yesteryear with mahogany booths and a terrazzo floor. Or try a Lago, a soft drink similar to Dr Pepper that was developed in the 1920s by Charlie Lagomarcino. They have a full menu and can accommodate groups.

The store makes a good shopping stop, offering a wide selection of goodies, from truffles and toffee to homemade ice cream, gourmet nuts, and, in season, caramel apples and chocolate Easter eggs. A jar of Lagomarcino’s hot fudge sauce is to die for and makes a good souvenir of the Quad Cities. (www.lagomarcinos.com)

On the Iowa side of the river, downtown Davenport has several brew pub options convenient for beer enthusiasts staying at the Radisson and Blackhawk hotels. Front Street Brewery on River Drive (formerly Front Street) is Iowa’s oldest brew pub, offering a warm interior with exposed brick walls and a cozy beer garden in back. The building, more than 100 years old, was once home to a vegetable warehouse, car repair garage, printing company and beer warehouse. The Beer Cellar, a private room, can accommodate groups of 20 to 40.

Top sellers on the Front Street Brewery menu include burgers, fish tacos and pulled pork nachos. The best-selling beer is Raging River Ale, an English ale. Also on the roster are Cherry Ale, Hefe Weizen, Bucktown Stout and Old Davenport Gold, a pilsner. (The riverside area was called Bucktown in the 1920s.) 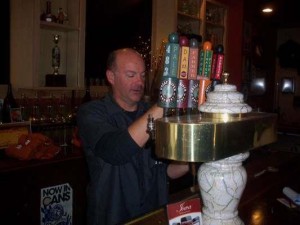 To keep up with production, Front Street Brewery recently opened a second riverfront location where all beer-making is now done. Housed in a restored 1917 railroad freight building overlooking LeClaire Park, Front Street Tap Room provides river traffic views through a long, floor-to-ceiling window and has an outdoor deck as well. No food is served, but guests are welcome to bring in food from Fresh Deli next door. Located next to old Union Station (now a visitor center run by the Quad Cities CVB), the Tap Room is just steps away from the Freight House Farmers’ Market. Also close by are Rhythm City Casino and Modern Woodmen Park, home of a Houston Astros minor league baseball team. (www.frontstreetbrew.com)

Downtown Davenport’s Great River Brewery, like the area’s other brewpubs, is going gangbusters and has doubled its capacity in the last three years. Hand-crafted brews include Roller Dam Red Ale, 483 Pale Ale, the nutty brown Farmer Brown Ale and River Rat Root Beer. Pumpkin ale is a seasonal favorite. Great River, the second largest microbrewery in the state, moved to Davenport from Iowa City in 2009. (www.greatriverbrewery.com) 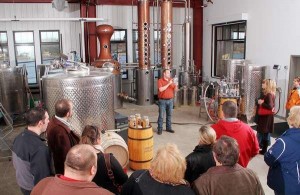 In quaint LeClaire, 20 minutes east of the Quad Cities, Mississippi River Distilling Co. makes small-batch spirits from “grain to glass,” taking pride in the  use of local corn, wheat, barley and rye for its hand-crafted vodka, gin and whiskey. Opened in late 2010 by brothers Ryan and Garrett Burchette, the riverfront facility has already welcomed more than 50,000 visitors. Free public tours of the micro-distillery include product samples. Private group tours (for a fee) can be arranged. Seasonal treats include strawberry- and coffee liqueur-infused vodkas. The tasting room features panoramic views of the Mississippi and a gallery of works by local artists. (www.mrdistilling.com)

With its historic river pilot homes and antique and gift shops, the town of just over 4,000, lives on tourism. The Buffalo Bill Museum celebrates William F. “Buffalo Bill” Cody, who was born in LeClaire in 1846. Buffalo Bill’s boyhood home, open from April through October, is in nearby Princeton. LeClaire’s main claim to fame these days is a shop called Antique Archaeology, home base for the History Channel’s American Pickers show.

The Riverboat Twilight, offering two-day cruises to Dubuque, also brings visitors to LeClaire. So does Tug-Fest, a summer event pitting Iowa and Illinois teams in a tug-of-war across the Mississippi.