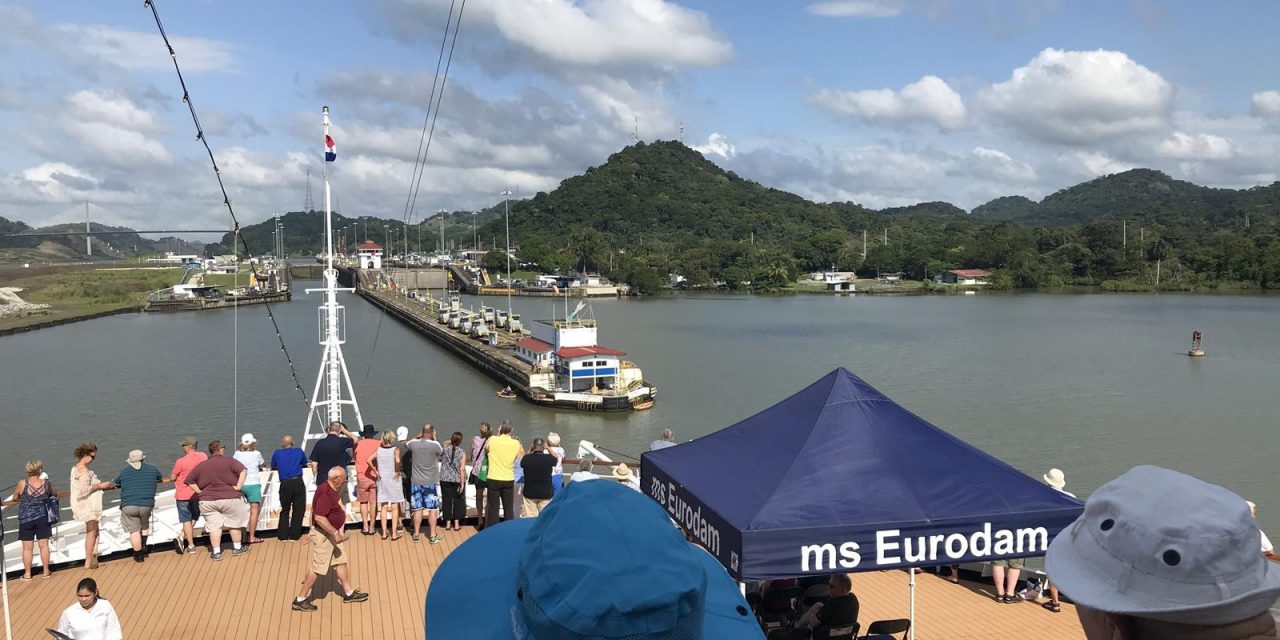 Passage through this manmade wonder highlights a two-week Holland America voyage from California to Florida, with calls in Mexico, Guatemala, Nicaragua and Colombia

Of all of the wonderful and exotic destinations to which cruise ships take us, few are experienced while on the ship itself. Transiting the Panama Canal is a truly one-of-a kind experience, a must on any seafarer’s bucket list, and can be enjoyed in its entirety without ever setting foot on land.

A 15-day journey aboard Holland America Line’s Eurodam presented us the unique opportunity to cruise both the Pacific and Atlantic oceans, visit two continents and encounter one of mankind’s greatest engineering marvels.

Two Stops on the Mexican Riviera

The 2,104-passenger Eurodam set sail on a beautiful autumn day in San Diego, California, and arrived three days later in the beach resort city of Puerto Vallarta, Mexico. Though we docked directly across the street from a Walmart, considerably more scenic and enriching destinations were only a short taxi ride away.

The Malecon is the seaside promenade where tourists enjoy views of the Bay of Banderas as they stroll among street vendors, artists, rock balancers and some interesting contemporary sculptures. A short walk from the Malecon, the Cathedral of Our Lady of Guadalupe, with its Renaissance-style tower topped by a wrought-iron crown, is the city’s most recognizable landmark. Our shore excursion in Puerto Vallarta included a stop at a restaurant and raicilleria, where we learned about and sampled raicilla, a distilled spirit similar to tequila or mezcal. Other excursions included dolphin encounters, horseback riding, a jeep safari and a tequila factory tour. 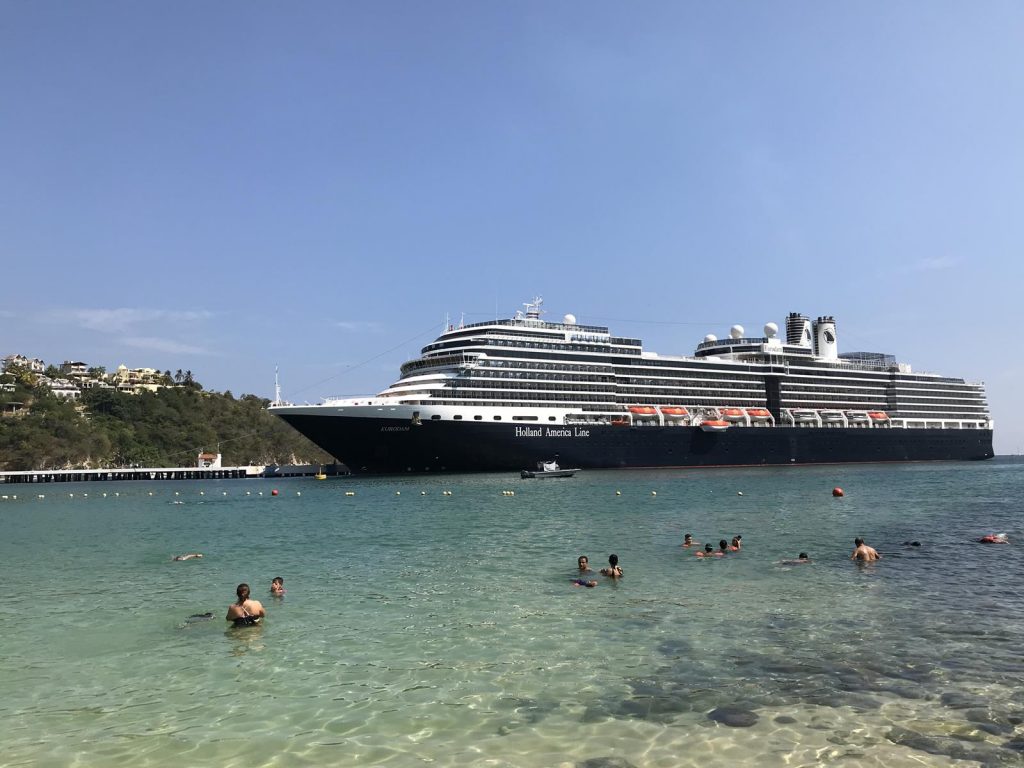 Eurodam passengers had a chance to swim at the beach near the cruise ship pier in Huatulco, Mexico.

After another day at sea, the ship called at four ports along Mexico and Central America’s Pacific coast in consecutive days. First up was the small Mexican resort town of Huatulco. While some passengers set down their beach towels at Santa Cruz Beach, located just at the end of the pier, others toured Huatulco’s bays by catamaran or sailboat, or snorkeled at a nearby beach.

Ports of Call in Central America

Guatemala, Central America’s most populous country, has two cruise ship ports—one on the Pacific side and one on the Atlantic. The Eurodam docked at the former, the industrial port of Puerto Quetzal. Besides the large thatched-roof greeting center and souvenir market, there was not much to see around the port.

Most passengers took the scenic 90-minute drive through sugar cane and banana plantations to the colonial city of Antigua, a UNESCO World Heritage Site. Surrounded by three volcanoes, Antigua was cooler, breezier and less humid than the coast. This climate made for a pleasant day to explore the cobblestone streets and take in the colorful Spanish-style architecture. To add to the vibrant hues of our surroundings, we were followed throughout our walking tour by young girls and old women selling vivid textiles they carried draped over their arms and stacked on their head. 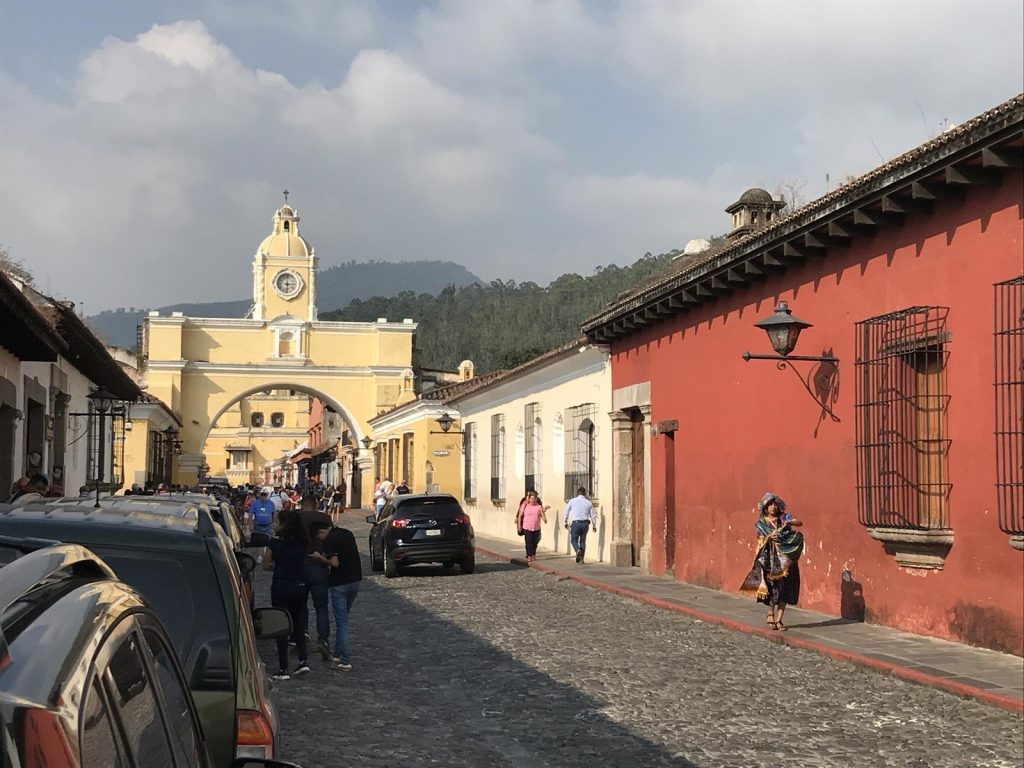 We also visited the nearby Filadelfia Coffee Estate, where we learned about one of Guatemala’s most important exports before sampling a fresh-brewed cup with a typical Guatemalan lunch of steak, refried beans and homemade corn tortillas.

Amid the stacks of cargo containers in Nicaragua’s main port, Corinto, Eurodam passengers were given a lively welcome with loud music, energetic dancers and small children in traditional dress greeting guests as they exited the ship. With little to do around the port itself, many passengers toured the nearby colonial city of Leon or the world-famous Flor de Cana rum distillery in Chichigalpa. 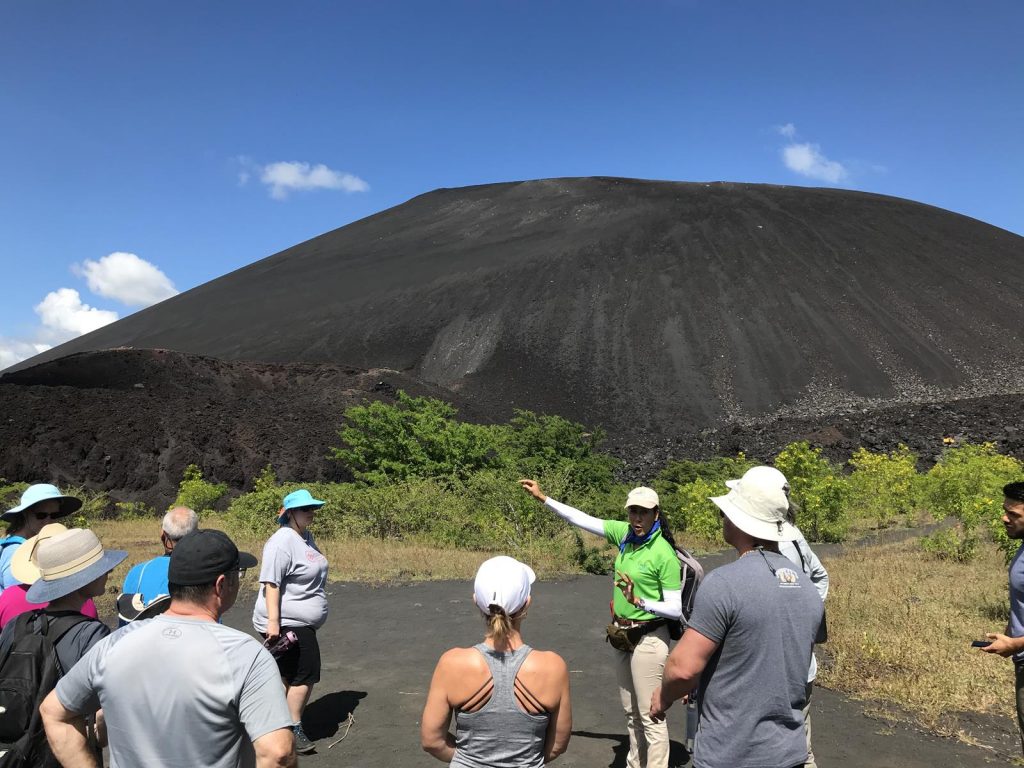 We chose a two-hour narrated bus ride past peanut plantations and sugar cane fields that brought us to Cerro Negro volcano. The hike up the steep, craggy path to the top was strenuous and not at all for the out-of-shape, but we were rewarded with a panoramic view of the surrounding mountains and Pacific Ocean off in the distance. The hike back down was more of a controlled slide at a 40-degree angle through loose rocks and gravel. By the time we returned to the bus, our shoes were overflowing with volcanic rocks and black sand, and we were exhausted.

In Costa Rica, we docked at the industrial port of Puerto Caldera. Nature-themed activities on shore tours included a river raft float, a mangrove cruise and a mid-air walk through the rainforest along suspension bridges. Costa Rica helped put zip-lining on the map, and many places give thrill seekers the opportunity to fly from tree to tree over rainforest canopies.

At Rainforest Adventures, the nature park we visited, we could hear the zip-liners’ shouts of excitement in the distance from our “lower and slower” aerial tram, which makes a more peaceful trip through the treetops. In the town of Turrucares, a guided tour of the Costa Rica Animal Rescue Center introduced guests to a myriad of rescued animals, including sloths, capuchin monkeys, owls, kinkajous, scarlet macaws and green parrots.

The sea day before the canal transit served as a Panama Canal “prep day.” The cruise director’s morning lecture packed the auditorium as people stood in back and sat in stairways to learn about the canal’s planning and construction and to receive an overview of the passage schedule and advice on how best to experience it. A few hours later, the auditorium filled up again as a documentary film about the canal’s history was shown. 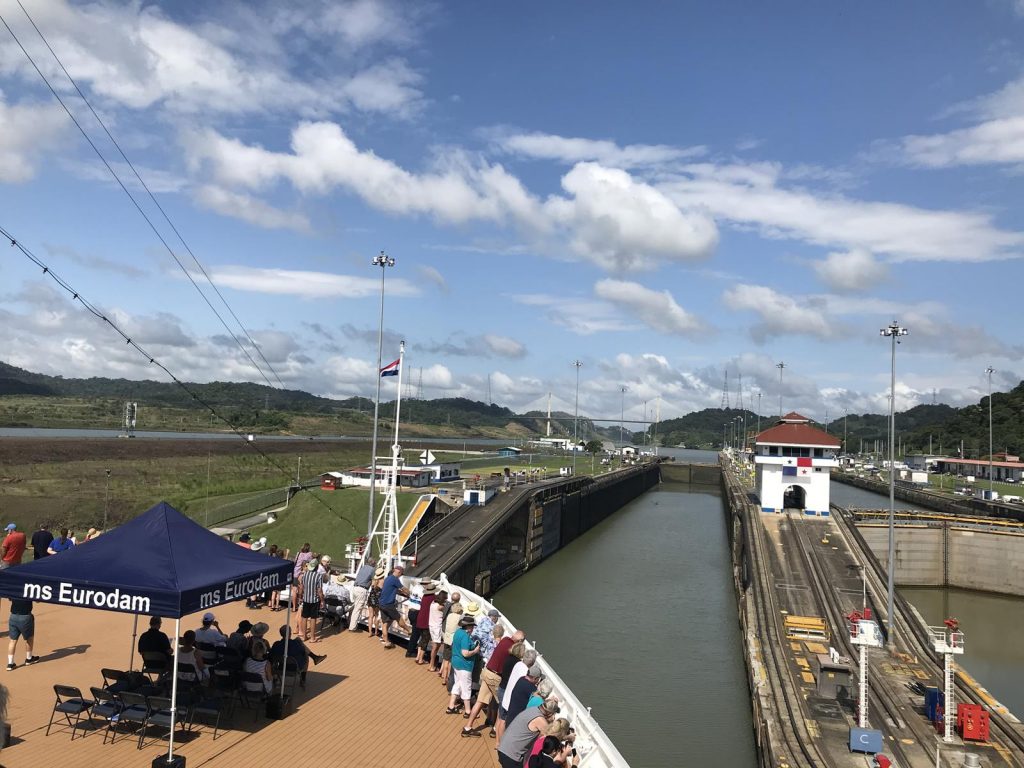 Passengers watch as their ship prepares to enter a lock on the Panama Canal.

The day of the Panama Canal passage started early for most. By 5 a.m., the forward observation lounge (the EXC) and outside observation deck were already bustling, and service of coffee, tea, orange juice and Panama rolls was underway. In the pre-dawn darkness, lights from dozens of ships waiting their turn to transit the canal surrounded the Eurodam, and the sparkling lights of the Panama City skyline could be seen in the distance.

Commentary by a Panama Canal expert began over the loud speakers in the observation lounge and outside public areas promptly at 6 a.m., just as the sun began to rise. The commentator continued to chime in throughout the day to point out notable surroundings and explain the operation of the canal as we experienced the various stages of the much-anticipated passage.

The Eurodam began its ascent from sea level at Miraflores Locks around 7 a.m. and returned to sea level around 5 p.m. at Gatun Locks. In between, cruising at approximately 85 feet above sea level, the ship passed through the narrow Culebra Cut (an eight-mile stretch of excavated gorge that presented a particular challenge during the canal’s construction) and the sprawling, manmade Gatun Lake. Along the way, we passed closely by several large cargo ships and Holland America’s Rotterdam, which was making the transit in the opposite direction. Overall, the voyage through the canal covered about 50 miles and a total of six locks (three to raise the ship and three to lower it back down).

On the recommendation of the cruise director, we spent the day taking it all in from different vantage points. From the upper observation deck, we watched as our ship passed under the Bridge of the Americas at the Pacific entrance at Panama City and the Atlantic Bridge at the Atlantic exit at Colon. The Deck 5 bow, accessible only during the canal transit, offered a captain’s-eye view of the locks, along with tents for shade, cool towels and bar service. From the aft Sea View Pool, we marveled as the massive lock doors closed behind us. From the lower promenade deck, the walls of the locks were only an arm’s length past the edge of the railing as the 106-foot-wide Eurodam passed through the 110-foot-wide locks.

After the Panama Canal, the Eurodam called at Cartagena, Colombia—our only South American port. The colonial walled city is full of history and old buildings, but we chose an excursion to the National Aviary of Colombia, a showcase of brilliantly colored birds. 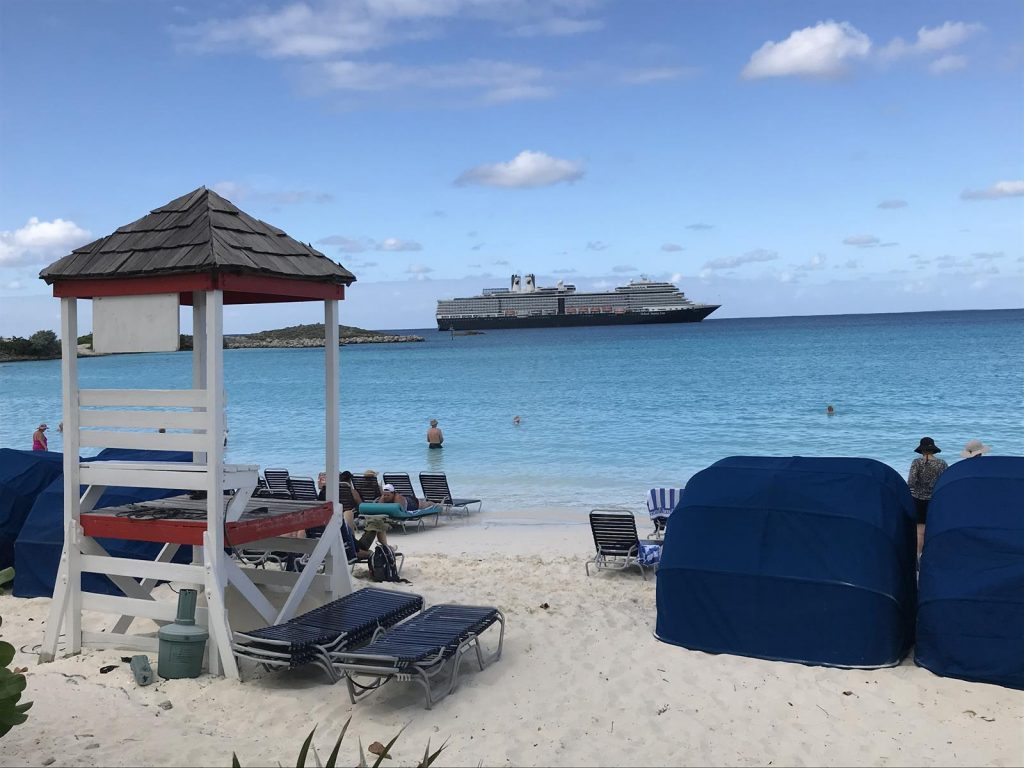 Half Moon Cay is Holland America Line’s private island in the Bahamas.

The final port of call before disembarkation at Fort Lauderdale, Florida, was Holland America’s private Bahaman island of Half Moon Cay, where activities included snorkeling, sailing and bike boats. The clear blue water and white-sand beach made for a perfectly relaxing beach day.

Activities and Dining on the Eurodam

The Holland America name, and this 15-day itinerary in particular, attracted a mature, well-traveled passenger base. Around the mid-ship Lido Pool, covered when necessary by a retractable glass roof, passengers lounged in deck chairs reading and doing crossword puzzles. A similar scene was the norm at the aft Sea View Pool, where the adults-only” sign was hardly necessary. There were no loud music, big screens or “hairiest man” competitions on deck at any point during the voyage. 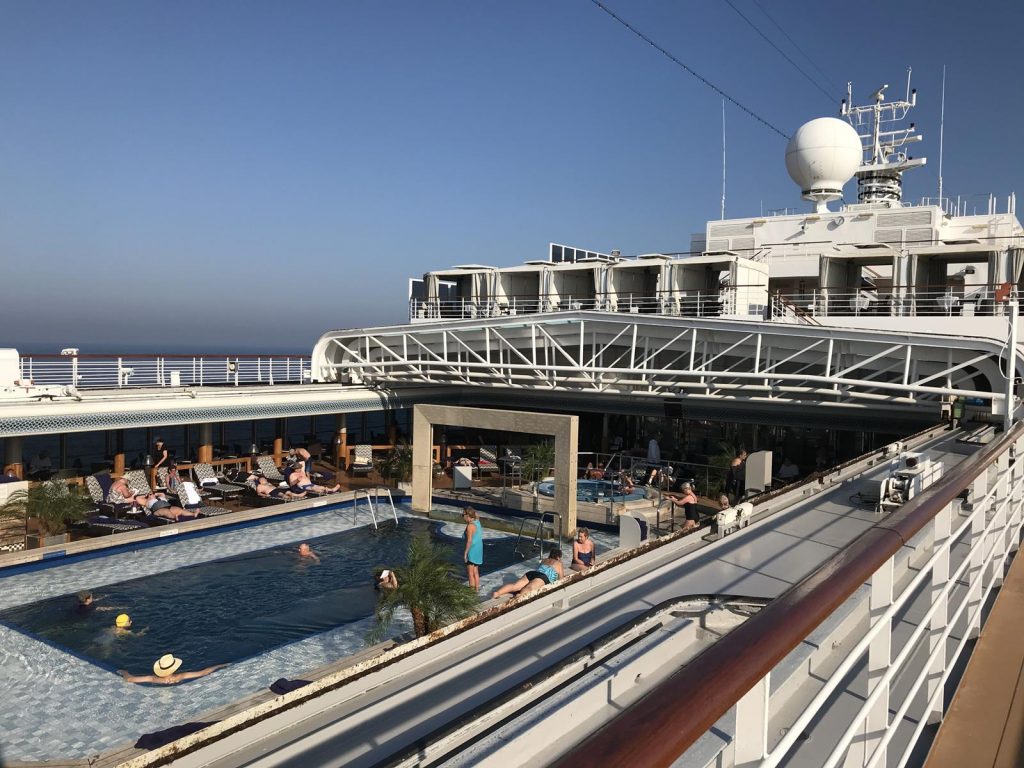 However, even with six days at sea (not including the Panama Canal transit), there was never a lack of activities for those wishing to engage. General trivia and music trivia were held two to three times daily and always well attended. Port talks, shore excursion talks and an “Ask the Captain” session were held in The Mainstage auditorium, and a movie was shown there each afternoon. Computer classes and photo workshops were conducted multiple times daily in the Microsoft Studio. Cooking demonstrations with themes such as “Serious Tacos” and “We Love Chocolate” also kept passengers engaged, and tours of the Eurodam’s main galley were given early in the cruise and again towards the end. 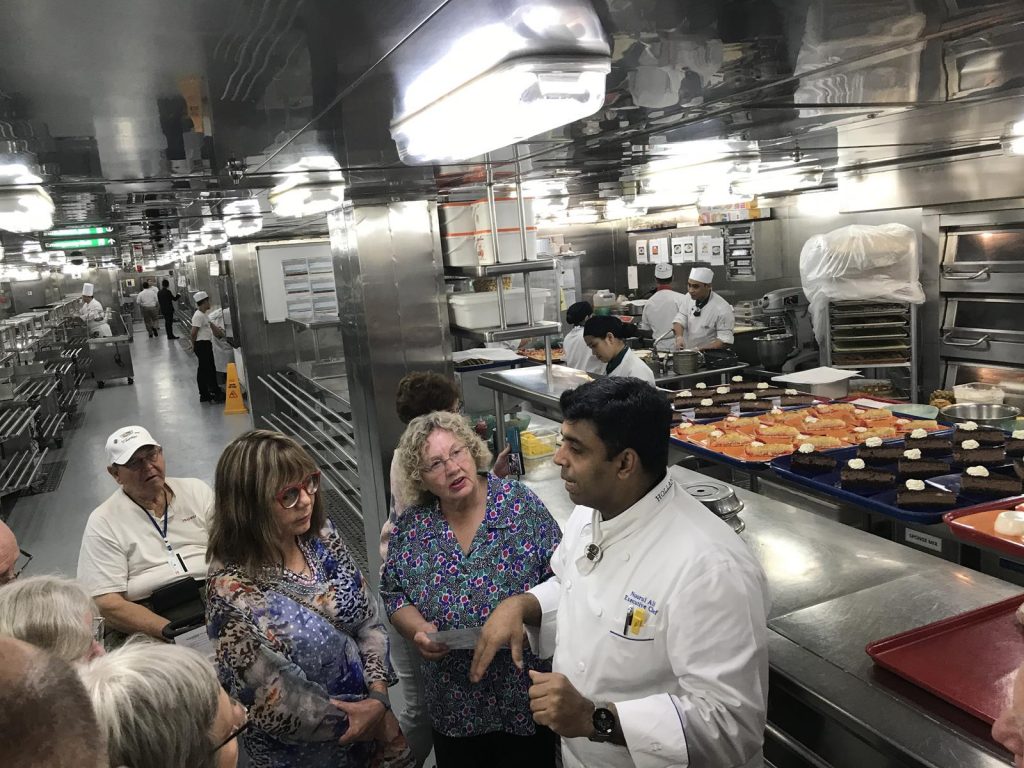 At night, the Lower Promenade Deck came alive with entertainment. The Music Walk, which spans most of the ship’s length, consisted of multiple venues to satisfy a specific musical taste or a taste for variety. With each venue hosting multiple shows nightly, one could expect to have up to nine shows to choose from on a given evening.

At Lincoln Center Stage, a string quintet performed stirring sets with themes such as “A Night at the Ballet” and “Movie Classics.” In B.B. King’s Blues Club, a full blues band staged lively renditions of classic hit songs. In Billboard Onboard, dueling pianists belted out mainly audience requests. The aptly named Mainstage, which spans three decks at the ship’s bow, held an early and late performance of varying acts, including a comedian, magician, concert pianist and dance troupe.

A wide variety of dining options on the Eurodam meant there was something new to try for every meal. The two-level main dining room was open for breakfast, lunch and afternoon tea. For dinner, the upper level was designated for early and late seatings, while the lower level had open seating. The Pinnacle Grill, located just off the small three-level atrium lobby, was an intimate extra-cost venue serving high-quality steak and seafood. Hidden away on Deck 11, Tamarind was another extra-charge restaurant, serving excellent Pan Asian cuisine in an elegant setting. The other specialty dining choice, Canaletto, presented Italian fare, family-style, steps from the Lido Market, a buffet open from morning to night.

Artwork around the ship has a strong Dutch influence. Stairway landings exhibit large nautically themed and other paintings by Dutch artists. Rembrandt reproductions, including extra-large self-portraits at various ages, can be found throughout the ship, greeting guests at each floor as they exit the glass exterior elevators mid-ship. Stateroom hallways are lined with black-and-white photographs of Holland America ship scenes—interiors and exteriors, passengers and crew—from its origins to present day.

The Eurodam is scheduled to transit the Panama Canal again in October 2020 and April 2021. Holland America’s Nieuw Amsterdam, Rotterdam, Volendam and Zaandam also are slated to make the canal passage in the coming year.

Story and photos by Jeremy and Stacie Mink