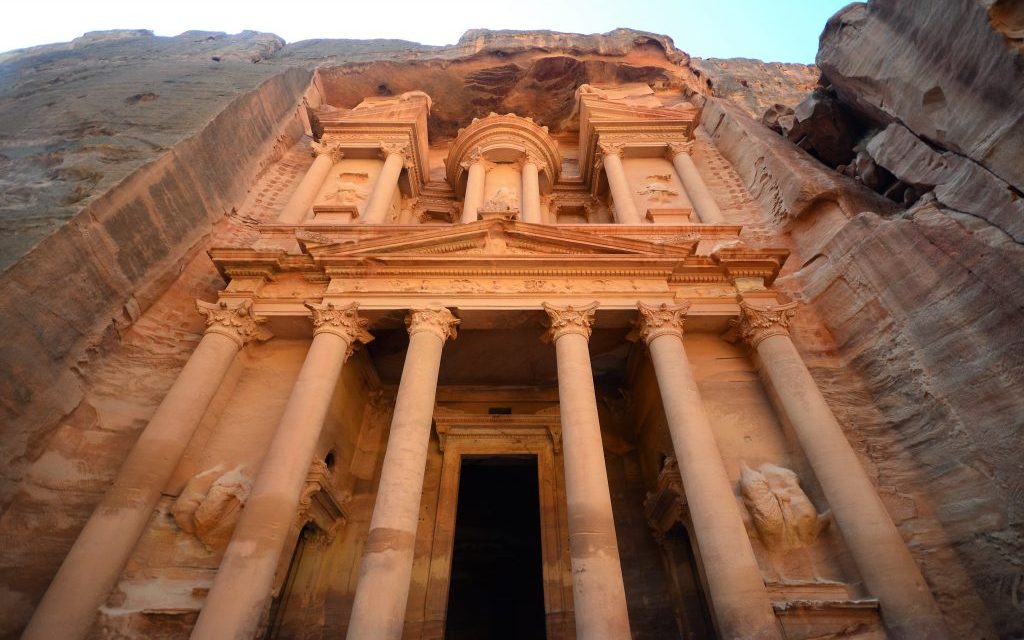 Jordan captivates visitors with its history, vibrant culture and friendly people. Throughout the country, moreover, are important religious sites. Situated in what is known as the “cradle of civilization,” the small country is a must on faith-based tours of the Middle East.

Before he died, Moses gazed down over the Promised Land from Mount Nebo, where he could see to the Dead Sea, Jerusalem and beyond. Since the 4th century A.D., this 3,300-foot mountain has been the site of Christian pilgrimage for those wishing to walk in the footsteps of Moses. Upon reaching the summit, pilgrims are greeted with more than just sweeping views. There is a statue of Moses inscribed with these words from John 3: “As Moses lifted up the serpent in the wilderness, so must the Son of Man be lifted up.” Also on the site are a church and excavated mosaics dating back to the 6th century. Today, Mount Nebo, located six miles from the historic religious center of Madaba, is an active Franciscan monastery that is open to visitors.

No religious tour to Jordan would be complete without a chance to float in the Dead Sea, the lowest point on earth. A salt content almost 10 times higher than that of the world’s oceans creates an incredible effect where visitors become buoys and can float in the warm water with ease. The salt, along with the clay found on the sea’s floor, are used in skincare products. But there is so much more to the Dead Sea that makes it a popular site for religious groups traveling through Jordan. One of the most dramatic stories of the Old Testament, that of Lot, is said to have taken place just off the shores of this salty lake. Lot’s wife was turned into a pillar of salt for disobeying God’s will, but his two daughters fled to a cave near the town of modern-day Safi, just south of the Dead Sea. The Bible says that Lot’s daughters gave birth to sons whose descendants later became the Ammonite and Moabite people, whose kingdoms were within modern-day Jordan. Just outside of Safi are a church and monastery dedicated to Saint Lot, built around the cave where Lot and his daughters sought refuge.

Situated in the north of Jordan, the picturesque village of Umm Qais was the site of several key events in religious history. Probably the most notable is the Gadarene Swine miracle, which tells the story of Jesus encountering a mad man who lived in the tombs at the city’s entrance. Jesus cast the bad spirits out of the man and into a nearby herd of pigs that then ran down the hill into the Sea of Galilee and drowned. Recently excavated in Umm Qais was five-aisled basilica that had been built directly over a Byzantine tomb. The arrangement of a church above a tomb is said to be an important factor in indicating that this is the very spot where the Byzantine faithful believed that Jesus performed his miracle.

The charming small town of Madaba, located along the famous King’s Highway between Amman and the Dead Sea, is known as the “City of Mosaics.” It may be most famous as home to a mosaic map of Jerusalem and the Holy Land that dates back to the 6th century. Consisting of over two million stone pieces, the mosaic is inside the confines of the Greek Orthodox Church of St. George, a gorgeous structure that was built in 1896 over the remains of 6th century Byzantine church. Also in Madaba is the Church of the Virgin and the Apostles, which contains an impressive ancient mosaic depicting scenes from everyday life. Madaba is a great place to stroll through the narrow streets, browse the shops and stop in for tea at a cozy cafe.

The Ruins of Petra

Petra, the most popular destination in Jordan, is renowned throughout the world for its breathtaking ancient ruins that look like something straight out of a movie. But in fact, these ruins date back to the Nabataean empire between 400 B.C. and A.D. 106. Visitors can spend multiple days exploring the passageways, trails, tombs and lookout points to truly experience what was the center of the Nabataean Kingdom. According to Arab tradition, Petra is the spot where Moses struck a rock with his staff and water came forth. The modern-day town surrounding Petra is named for him. As visitors wander through the sacred valley, there are countless shrines and spots of religious significance to behold. Be sure to climb all the way to the Monastery, a stunning stone structure with a large plaza that was used for religious ceremonies. The Monastery is thought to originally have been used as a temple and later as a church, dedicated to the deified Nabatean king Obodas I, who reigned in the 1st century B.C.