Wisconsin Off the Beaten Path

As soon as I walked through the door, I knew I had entered another world. With rich cherry paneling, antique grandfather clocks from England and vintage oriental rugs on a hickory wood floor, the lobby of the Delafield Hotel took me on a magic carpet ride back to an era of gentility.

Classical music and oil paintings in museum-quality frames, along with sconces and chandeliers accented by diminutive lampshades, further enhanced the English country house atmosphere, as did the equestrian art in the pub-like bar off the lobby. There was elegance all around. 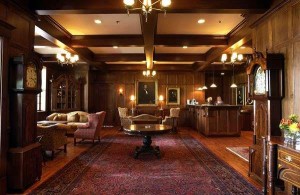 The Delafield Hotel, a stately brick building with colonial architectural touches and 19th century furnishings, makes a ravishing impression on guests, especially those who arrive with no preconceived notions about this southeastern Wisconsin town of 7,000 between Milwaukee and Madison. The sense of history and appreciation for the finer things in life, in fact, set the tone for Delafield, a place that hadn’t crossed my radar until just a few weeks before.

Just as tourists like me get swept away during an escape to Delafield, residents take refuge in the town they call home. Mary Daniel, who was president of the local tourism council for 10 years, said, “When I get off of I-94 and see the Delafield sign [a solid stone structure], I know I’m home and in a less hectic world.”

Before retiring, Daniel was a sales representative for a nationally known purveyor of art calendars, the Lang Company, whose founder, local real estate developer Bob Lang, started the town’s renaissance in 1988. Many of the handsome, Williamsburg-style buildings downtown served as warehouses for his company. After Lang’s company was acquired by Perfect Timing, Inc., the warehouses, such as the building that now houses the Delafield Hotel, were converted to other uses, including retail. The hilltop hotel, sporting a stately cupola, opened in 2006. 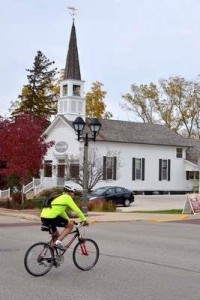 To visitors, Delafield, is, above all, a shopping town. Filled with clothing boutiques and other specialty shops, plus inviting places to eat, it offers plenty of possibilities for the weekend shopper. Just in the last year, 28 businesses have opened up downtown or on the outskirts, said Debra M. Smith, executive director of the Delafield Chamber of Commerce.

“Delafield is truly a hidden treasure,” Smith said. “I’ve lived here for 10 years and I discover something new every week.”

Some of the downtown shops occupy historic buildings, but most are in structures that just look old, many built in the last two decades by Lang. He also developed the riverwalk along the Bark River and is responsible for the ornamental wrought-iron street lamps. Some of the streetscapes have a movie-set quality. The streets aren’t cobbled, but red brick crosswalks and brick borders on the sidewalks add to the retro look.

Even the Daybreak Mobil gas station on Genesee Street, the main street, is a handsome brick building, complete with dormers. The gas pumps, in brick-pillared bays in the rear, are hidden from the street. What’s most unusual, though, is the high-end butcher shop that shares space with the convenience store. Haus of Prime Meats & Deli makes 18 different kinds of bratwurst and other sausages and offers everything from USDA prime steaks (its most popular item) to ground buffalo, elk and lamb. They can ship or put takeaways on ice.

I’m more of a bakery person, so I spent a lot of time in Great Harvest Bread Co., a franchise that opened last year. I sampled a generous slice of pumpkin chocolate chip bread slathered with butter and bought a loaf of High 5, a high-fiber bread made with whole wheat, millet, oat bran, and sunflower and flax seeds. 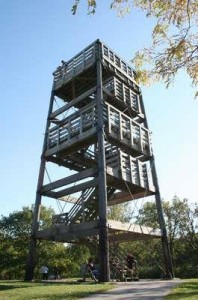 One of several shops on a block called Delafield Square, the bakery has some intriguing neighbors. I had fun sampling premium olive oils and aged vinegars at Oliva di Vita, which opened in May. My favorites were the honey vinegar (said to be good in bloody Marys or tossed with strawberries) and dark chocolate balsamic (on ice cream or in coffee). The olive oils come from not only from Italy and California but Spain, Portugal, Tunisia and Chile.

More exotica awaits at neighboring Elements East, which deals in antiques from Mongolia, Tibet and the northern provinces of China. Each piece has a story to tell. How about a 120-year-old, hand-painted Mongolian trunk?

Across Genesee Street from the modern Delafield Square complex is a white church building that now houses a women’s apparel boutique called Unique in Delafield. Commonly called “The Steeple,” the former Presbyterian church, crowned by a shingled steeple with weather vane and bell, symbolizes Delafield’s quaintness. It still has the original door and stained glass. The redesigned church once housed live theater and the Lang Co. gift shop.

Lang art calendars and related products are still made and can be purchased, along with Vera Bradley quilted bags, at Bittersweet, whose owners used to work at the Lang shop in “The Steeple.”
Also worth a look is Lieblang Leather, a manufacturer of fine leather and fur jackets. Lieblang recently was commissioned to make four leather jackets as gifts for the First Family, including one with an embroidered Presidential Seal sewn in. Rick Lieblang, in business for 25 years, says the hottest items now are leather jackets trimmed with fur, such as rabbit, raccoon, fox and rex rabbit (a cross between a chinchilla and rabbit).

Happily for guests of the Delafield Hotel, the boutiques are just a short stroll from the boutique hostelry. But you could easily spend your Delafield stay curled up in one of the hotel’s 38 high-ceilinged suites. My room, an executive suite, had a king-size sleigh bed, a flat-screen TV cloaked in an armoire and a large desk with a coffee maker. There was a wall-mounted, flat-screen TV in the bathroom, perfect entertainment while soaking in the Kohler spa tub. Bathrooms also feature a fancy Kohler shower with body spray jets. Homemade chocolate chip cookies are part of the turndown service. 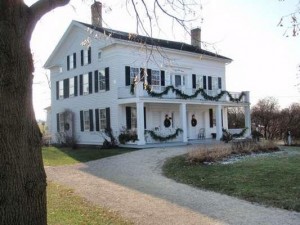 A block away is another hostelry, this one an historic stagecoach stop that served as Delafield’s first social center. Hawks Inn Museum, which was moved a few blocks in 1960 to its present location, dates to 1846. The three-story, 18-room building is furnished with mid-19th century antiques, from beds and quilts to trunks, weaving looms and spinning wheels.

Delafield also takes pride in a historic school—St. John’s Northwestern Military Academy. Established in 1884, the private boarding school for young men in grades 7 to 12 attracts students from around the world. Tours of the campus, noted for its castellated limestone buildings in the English Gothic style, can be arranged.

Delafield, located in the Lake Country of southeastern Wisconsin, surrounds Lake Nagawicka and abounds with recreational options. Several bike trails pass through the area, and just minutes from town is the Lapham Peak Unit of Kettle Moraine State Forest. The 45-foot wooden observation tower on Lapham Peak, at 1,233 feet the highest point in Waukesha County, affords panoramic views, including glimpses of Milwaukee’s downtown skyline, 35 miles away. Cross country skiing is big in winter, and in summer the park’s amphitheater presents everything from Shakespeare to Irish dancing.

For more information on Delafield, contact the Delafield Chamber and Tourism Office, 888-294-1082; visitdelafield.org.