Cruise Lines Give Back

The cruise lines are leaders when it comes to philanthropic efforts, from involvement in local and national charities to volunteer service groups in which their employees participate.  After the recent earthquake that devastated Haiti, cruise lines quickly jumped in with humanitarian efforts and donations. This is proof that cruise lines truly give back. 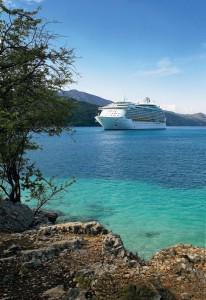 When the earthquake in Haiti occured, Royal Caribbean passengers stepped in to lend support

Royal Caribbean International has been one of Haiti’s largest foreign investors for close to 30 years, beginning back in the 1980s with the development of Labadee, a private destination used by its ships. Labadee was not affected by the earthquake. Royal Caribbean waited to hear back from the Haitian government about returning. Once informed it could return, one of their ships, Independence of the Seas made a call on Jan. 15 and brought with it much needed supplies for relief efforts. Since then, other ships have resumed going to Labadee, and Royal Caribbean Cruise Ltd. has pledged at least $2 million in humanitarian efforts, including donating 100% of the net revenue generated from calls to Labadee. In addition, cruise guests sailing on Royal Caribbean International, Celebrity Cruises and Azamara Club Cruises are able to make onboard donations via their shipboard accounts. Royal Caribbean has also been closely working with Food for the Poor, a long-time partner in Haiti.

In addition to stepping up in times of tragedy, cruise lines have ongoing efforts helping out communities and charitable organizations.

Holland America Line’s “Ship to Shelter” program involves the donation of  goods from their ships to people in need. First begun in April 2008 as a partnership with the Port of Seattle in Washington, Holland America expanded “Ship to Shelter” in January 2009 with Port Everglades, and in March 2009 debuted the program in cooperation with the Port of San Diego. In “Ship to Shelter,” Holland America not only donates unused, individually-sized toiletries from its ships sailing out of these ports, but also periodically donates other items, from mattresses, televisions, cookware and silverware to dishes, linens and towels. It’s a win-win scenario because these are items that can be used by the needy, yet is also a way to provide an environmentally friendly solution for solid waste disposal.

As the market-leading cruise company in Brazil, MSC Cruises became actively involved in an alliance with UNICEF (the United Children’s Fund) in 2009.  The most heavily populated country in Latin America, Brazil has high levels of poverty in its major metropolitan areas and statistics show 48% of children there fail to complete secondary education.  The “MSC for UNICEF” initiative is a way for MSC Cruises to support a UNICEF program geared to help children with access to a quality education in communities of Sao Paolo and Rio de Janeiro. Guests sailing onboard their ships can make a donation from their shipboard account.

Costa Cruises has a wide array of research projects and initiatives it supports. This has included fundraising for muscular dystrophy, Down syndrome research and teen drug use. Costa Cruises also supports the Susan G. Komen for the Cure Foundation.

Carnival Cruise Lines has supported philanthropic and charitable organizations since its beginnings back in 1972. This moved to a new level in 1992 when the Carnival Foundation was created to support non-profit organizations, with special consideration given to requests that focus on the welfare and education of children. Carnival and its employees support more than 100 different organizations through the foundation. One example is  an innovative mentoring program with the Miami Heat and  Big Brothers Big Sisters, where more than 90 high school students (graduates of the Miami Heat Academy for at-risk youth) are paired with a member of Carnival’s management team who provides them with a firsthand look at the business world.

Passionate about brightening lives of children throughout the world, Disney VoluntEARS program, which has been in existence for over 25 years, has programs that Disney Cruise Line’s staff and crew actively participate in. One program is “Reading Together,” launched in 2003. Crew members from the Disney Magic and Disney Wonder visit schools St. Thomas and Nassau once a month to read aloud to students and act out favorite stories. Crew members also assist by distributing school supplies and books to help support education programs in the islands. In 2008 alone, more than 4,200 hours of volunteer service were contributed by cast and crew members. In addition to “Reading Together,” Disney Cruise Line VoluntEAR has three other programs, including “Compassion Visits,”  “Foundation for Hospital Art” and “Coastal Cleanups.”

Norwegian Cruise Lines (NCL) supports numerous charities and donates more than 100 cruises each year to organizations, from children’s issues, arts, culture, and civic programs to areas of health and welfare. And NCL works with the Make-A-Wish Foundation as well.