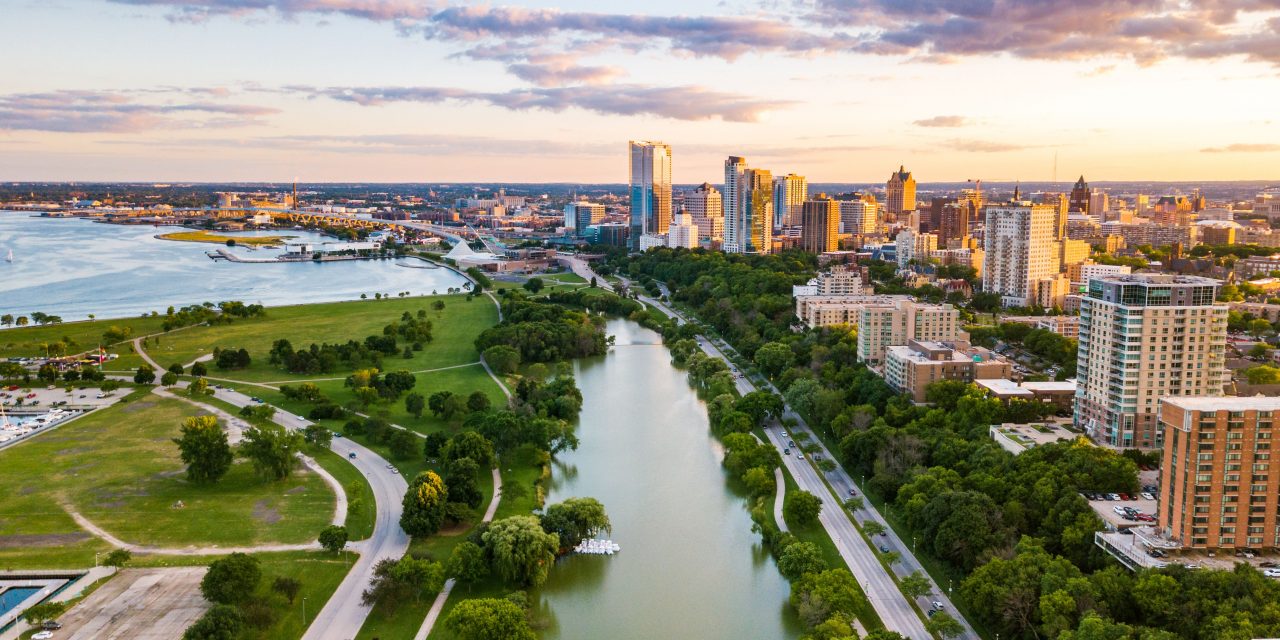 Wisconsin’s large and cosmopolitan cities are filled with vibrant neighborhoods, engaging museums, and diverse dining options. Whether you want to explore these communities on foot or with a chartered stepon guide, these cities and their local DMOs can provide your groups with itineraries and the resources for an unforgettable urban adventure.

Once a Menominee tribe outpost and French Catholic missionary settlement, Wisconsin’s largest city has blossomed into a metropolis teeming with art and history. VISIT Milwaukee is happy to work with group leaders and recommend itineraries to suit the needs of your party. Harley-Davidson, one of America’s most iconic brands, was founded here in 1904, and you can learn about the evolution of the motorcycle, racing history, and pop culture at the Harley-Davidson Museum. Located along the Menomonee River, this industrial-inspired complex houses hundreds of rare vehicles and posters for films like Easy Rider. Groups can also pose for photos along with an array of Harley-Davidson motorcycles that span the company’s 117-year history.

Celebrate the city’s association with beer with a tour of Lakefront Brewery, which includes a souvenir pint glass, two 16-ounce pours, and a behind-the-scenes glimpse of the brewing process. Guests will learn about the science of brewing, pose in front of Bernie Brewer’s original treehouse and sample popular creations like the Fixed Gear American Red IPA and the Riverwest Stein American Lager. The Milwaukee County Zoo is home to over 350 species and includes over 200 park-like acres. Popular areas include the Taylor Family Humboldt Penguin Exhibit (which spotlights the adorable birds native to coastal South America), Adventure Africa (where elephants live in a recreation of a sub-Sahara savanna), and the Herb and Nada Mahler Family Aviary. Groups of 15 or more will receive discounted admission and the opportunity to ride the Zoomobile around the property before exploring individually.

Want to experience the city with your taste buds? Board a bus and venture through welcoming neighborhoods with Milwaukee Food & City Tours. This outfitter provides transportation, tour guides, and access to countless Milwaukee dining hotspots, and it also tailors itineraries to ensure plenty of time to shop and explore local attractions. Popular themed experiences for groups include “Bikes, Brats & Beer,” which includes visits to the Harley-Davidson Museum and Sauerkraut Boulevard, “Churches & Chocolates” (which explores Milwaukee’s religious history and ethnic establishments), and “Craft Beers of MKE,” where you can sample concoctions in local taprooms.

Over 200,000 square feet of exhibition space outside of Milwaukee welcomes groups to one of the largest state fairs in America. Presenting the best produce, livestock, and baked goods the Dairy State has to offer, the Wisconsin State Fair allows visitors to talk with local farmers and learn how to make the same jam and syrup as blue ribbon winners. Cheer on the contestants in tractor pulls, pig races, and arm-wrestling tournaments, and be sure to catch a performance by country and rock and roll stars. An extensive midway with carnival games and thrill rides is open for the fair’s entire two August weeks, and group discounts are available for large parties.

Home to an NFL stadium, a lively arts scene, and spectacular water views, Green Bay is an engaging city for group tours, and Discover Green Bay can assist you to find hidden gems and arrange visits to popular attractions. The city’s crown jewel is Lambeau Field, home of the Green Bay Packers and the oldest continually operating NFL stadium. Stadium tours will guide you through the press box, locker rooms, and sidelines, and guides will explain the Packers’ history as the only publicly traded franchise in American sport. Football fans can also explore the adjoining Green Bay Packers Hall of Fame, where they can admire the team’s four Super Bowl trophies, Vince Lombardi’s desk, and memorabilia from a century of Packers history.

A few miles south of Lambeau Field is the Oneida Nation, a federally recognized tribe of Oneida people who welcome visitors to experience their culture. Tours include a look at the tribe’s buffalo herd from an observation deck, an explanation of the emerging Longhouse Village, and shopping for beadwork, corn husk dolls, and other crafts at the Oneida Nation Museum. Homeopathic and herbal remedies are a specialty at Oneida Market. Vendors sell sweetgrass, maple syrup, up to 35 kinds of apples, and much more at the weekly outdoor Oneida Farmers Market.

Be sure to explore Green Bay Botanical Garden, which includes 47 acres of display gardens and 65,000 plants from around the world. With 300,000 annual spring blooms, concerts at the outdoor amphitheater, and a nature-inspired holiday light show, there are engaging group activities for every season. Guided tours are available for motorcoach tours and include stops in the formal gardens, woodland trails, and the famous Schierl Wellhouse. The National Railroad Museum in neighboring Ashwaubenon is dedicated to railroad history and among the nation’s largest devoted to this mode of transportation. Take a 25-minute narrated train ride and learn about everything from steam power to hobo culture. Check out the Dwight D. Eisenhower locomotive, the only one of its kind left in the United States.

Wisconsin’s largest inland lake offers numerous boating, swimming, and hiking excursions, but the three major cities that border its shores (Fond du Lac, Oshkosh, and Appleton) offer thriving shopping districts, diverse dining, and engaging museums. EAA Aviation Museum in Oshkosh is one of the most extensive aviation attractions in the world. Guests can marvel at over 20,000 historic objects in exhibits that include “Women Flyers of WWII” and “Huey: The Workhorse of Vietnam.” A SpaceShipOne exhibit uses immersive sound and lighting effects to tell the story of a mission to space aboard the aircraft. Groups visiting Oshkosh can also hear a symphonic performance at the Grand Oshkosh Opera House, enjoy a stroll in Menominee Park, and browse retail deals at the Shoppes at Oshkosh.

Appleton—the largest of the Fox Cities—is home to the Hearthstone Historic Museum. This home was the first in the world powered by Thomas Edison’s centrally-located hydroelectric system, and guests can admire the Victorian mansion’s original light fixtures, intricate woodwork, and stained-glass windows. More beautiful artwork awaits at the Bergstrom Mahler Museum of Glass, which holds the largest, most representative collection of glass paperweights in the world. You can also visit the History Museum at the Castle, where you can experience magic tricks made famous by Appleton’s most famous former resident: Harry Houdini.

Located in Wisconsin’s southeastern corner between Milwaukee and Chicago, the cities of Kenosha and Racine offer plentiful outdoor activities along Lake Michigan, world-class art museums, and rich history. The Civil War Museum, the second-largest Civil War museum in the country, focuses on the contributions of the Upper Midwest to the war and the stories of soldiers and civilians alike during the conflict. The museum’s centerpiece is the “Fiery Trial” exhibit, which immerses visitors in a Civil War battle with authentic visual and auditory effects. Groups can also learn about natural history at the Kenosha Public Museum, ride through downtown on the Electric Streetcar and learn about 19th-century sailors at the 1866 Southport Lighthouse.

Wisconsin-born architect Frank Lloyd Wright helped popularize the Prairie Style and Usonian styles across the United States. And you can tour several of his designs in the Racine area. The SC Johnson Administration Building and Research Tower is the architect’s largest commercial project, a 15-level structure distinguished by alternating bands of brickwork and glass tubing. The three-story Great Workroom is supported by 62 concrete dendriform columns that resemble lily pads and Wrights own desk, which is characterized by rounded corners and swivel drawers. You can also tour Wingspread in nearby Wind Point. Designed for SC Johnson’s then-president H.F. Johnson, Jr., the building consists of four spokes connected to a central living space that contains an immense chimney with five fireplaces. No visit to Racine is complete without sampling the city’s famous kringle—a flaky Danish pastry stuffed with fruit or nut filling.

Discover what else the Badger State has to offer with the Circle Wisconsin 2022 Group Tour Planner!