Touring the Heart of Missouri 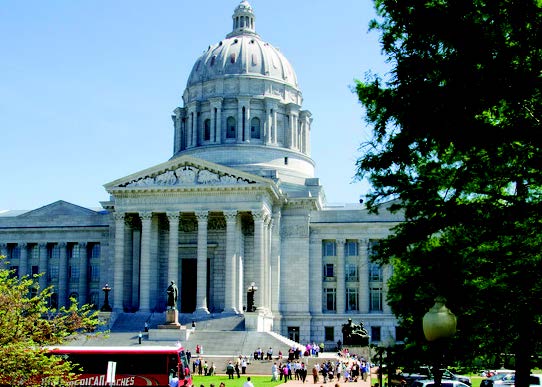 Straddling an area where Ozark highlands meet the western plains, the central Missouri region combines heartland hospitality and cosmopolitan variety. Outdoor-lovers and city types both will find attractions to love in small riverside hamlets and growing cities, while foodies will enjoy some of the best eats in the Midwest. Here is a small sampling of what mid-Missouri has to offer. 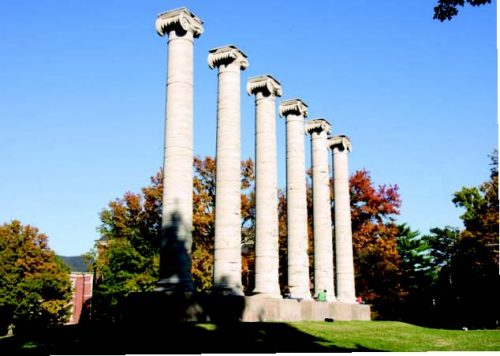 Home to the University of Missouri and a thriving arts community, Columbia is the cultural hub of mid-Missouri. Your group will want to spend time touring the university campus, whose highlight is historic Francis Quadrangle. Based on a Thomas Jefferson design and the site of his original tombstone, the “Quad” encompasses the university’s most famous academic building, including the towering Jesse Hall and Switzler Hall, the school’s oldest surviving structure at 144 years old.

Pause to admire the famous Columns, once the supports for the original Academic Hall before it was destroyed in a fire and is now one of the most photographed landmarks in Missouri. A few blocks away is The District, where your group can sample dozens of restaurants and boutiques for an afternoon on the town. Local favorites include Shakespeare’s Pizza and Booches Billiard Hall, where you can taste burgers consistently ranked among the best in the U.S (it’s cash only, so plan accordingly). Nearby on historic 9th Street is the Missouri Theatre, designed after the Paris Opera House and completely restored in 2008 to its former glory. Bands, speakers and treaveling Broadway shows take the stage nearly every night.

About 30 minutes south of Columbia is Jefferson City, Missouri’s state capital and a city with many historic sights. The Missouri State Penitentiary, decommissioned in 2004, now allows tours in what wwas once called “the bloodiest 47 acres in America” for its many riots and executions. Your group can pass by the cells of famous heavyweight Sonny Liston, who learned to box during his behind bars, and James Earl Ray, the gunman in Martin Luther King, Jr. assassination. 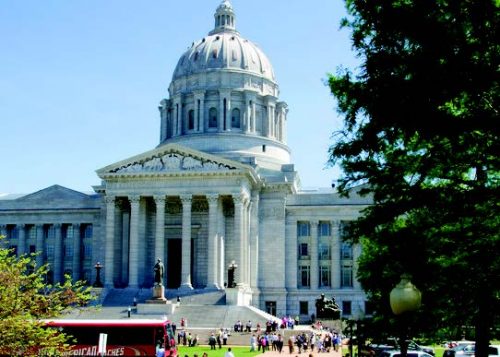 With views of Missouri River and priceless artwork inside, the Missouri State Capitol is worth a tour. Inside, you can study the murals of famed artist Thomas Hart Benton, see bronze statues of Lewis and Clark and even watch state government representatives in session. Your group will also want to explore the Capitol grounds and nearby downtown, home to High Street’s welcoming diners and specialty shops.

North of the Missouri River is Fulton, an ideal destination for a day trip. The National Churchill Museum, where the British prime minister delivered his famous “Iron Curtain” speech in 1946, houses exhibits about his military and political career on the Westminster College campus. Rooms include a simulation of the London Blitz and interactive displays of the European theater during World War II, and your group will want to admire the 17th century church the museum is housed in. Moved stone-by-stone from London, the Church of St. Mary the Virgin, Aldermanbury features many preserved walls and the original cupola. Also worth exploring is the nearby Auto World Museum, which displays vintage cars, Route 66 memorabilia and exhibits depicting the history of the automobile.

The quaint town of Hermann is nestled among the rolling hills along the Missouri River in countryside reminiscent of Germany’s Rhine Valley. Your group can wander through the charming downtown and enjoy lunch or wine tastings at Stone Hill Winery. Housed in the beautifully restored carriage house and horse barn, Vintage Restaurant is an excellent culinary complement to Stone Hill’s selection of wines, serving hearty German cuisine alongside traditional American Fare.

If your group has additional time, there are many more towns, attractions and historic sites in mid-Missouri to experience and treasure.