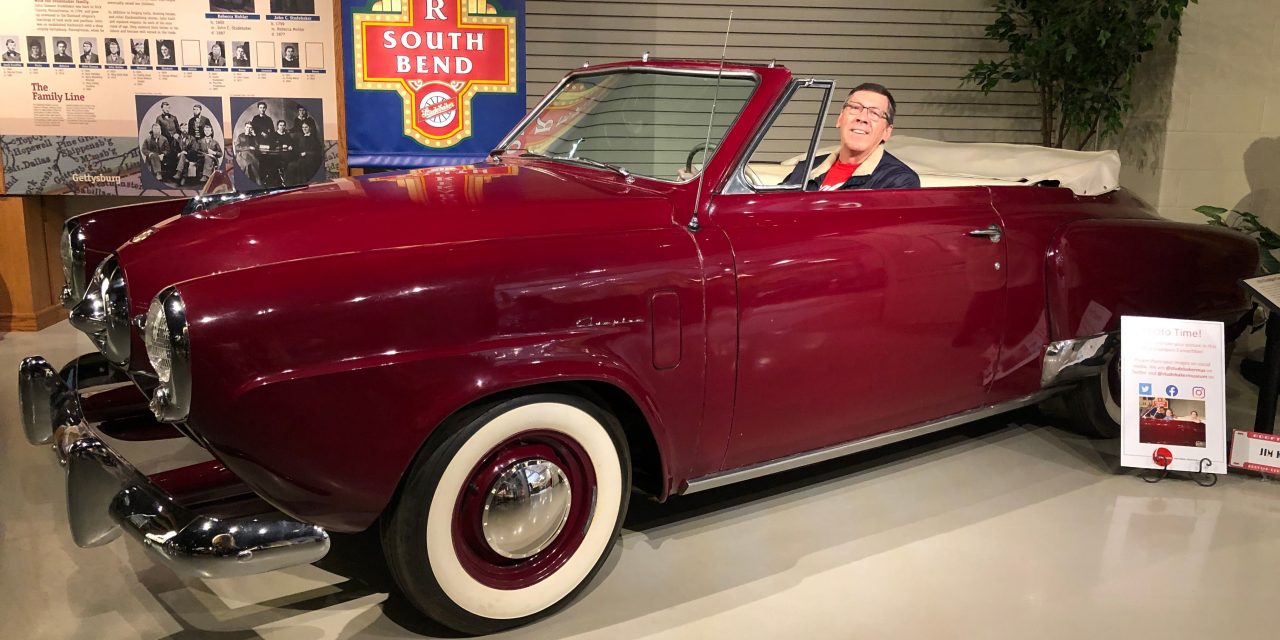 At the Studebaker National Museum in South Bend, Indiana, I found myself yearning for the autos of yesteryear, the good old days when cars had more personality and style than the motorized boxes we see on the road today.

Drifting through the rows of gleamingly restored antique specimens triggered boyhood memories of the now-defunct Studebaker brand. My recollections were only enhanced by fellow museum-goers—most of them elderly—who were in town for the Studebaker car club’s annual confab, a festive occasion where owners of vintage vehicles made by the South Bend-based manufacturer come to reminisce and show off their polished babies. People travel from as far away as Europe and Australia to join in the camaraderie at the Studebaker Drivers Club International Meet, which is held in a different U.S. city every year (in South Bend every few years). I spotted a number of Studebakers cruising down city streets and parked in downtown lots. 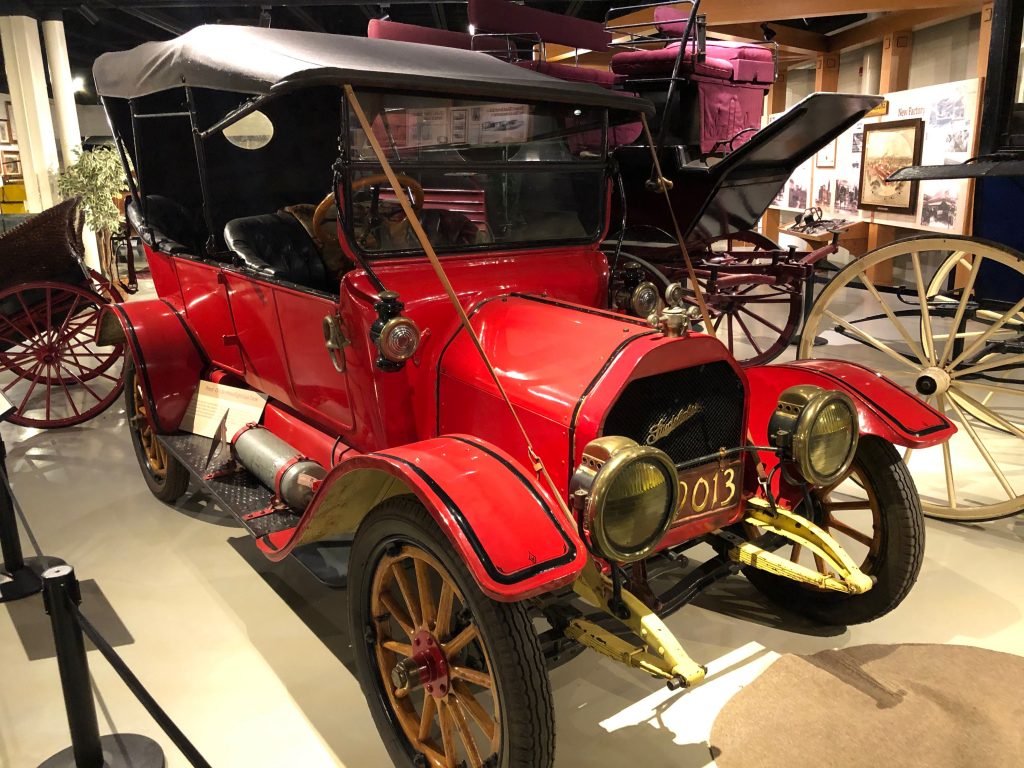 Studebaker introduced its first six-cylinder engine in the 1913 E6 Touring car, one of many vintage vehicles on display at the Studebaker National Museum in South Bend, Indiana. (Randy Mink Photo)

The Studebaker National Museum is just one of many crowdpleasers in South Bend and neighboring Mishawaka. Referred to locally as The Bend, the twin towns lie close to the Indiana/Michigan border.

South Bend is best known as the home of the University of Notre Dame, whose historic campus—actually ensconced in the separate postal entity of Notre Dame, Indiana—is a tourist magnet. Mishawaka, though slim on visitor attractions, boasts an ambitious parks system along the St. Joseph River, abounds with fine restaurants and seems to have every chain store imaginable.

The Studebaker Spirit is Alive and Well

The closing in 1963 of Studebaker Corporation’s South Bend plant resulted in the loss of nearly 7,000 jobs. The brand’s spirit, however, lives on not only in the car club and Studebaker museum but in places around town. A street, golf course and school bear the company’s name, as does a brewery.

A block from the museum, you can dine in style at Tippecanoe Place, a restaurant that occupies the 1889 mansion of Clement Studebaker, who, with his brother Henry in 1852, founded the company that started as a blacksmith shop and went on to become the largest producer of horse-drawn vehicles in the world. They entered the automobile business in 1902 and by 1913 had become America’s third-largest car manufacturer. Studebaker closed for good when it shuttered its Hamilton, Ontario plant, which produced a compact line until 1966. 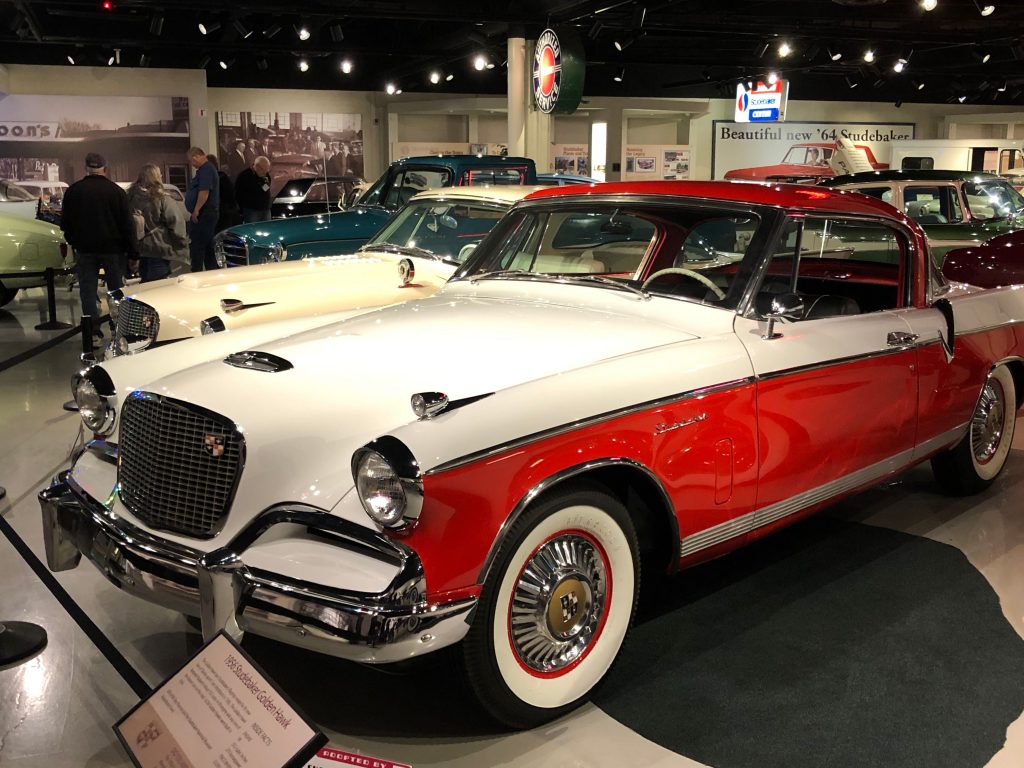 The 1956 Studebaker Golden Hawk, on display at the Studebaker National Museum, was priced at $3,095 new. (Randy Mink Photo)

At the Studebaker museum, those of us who remember the brand’s bullet-nosed front end can have the thrill of posing behind the wheel of a cherry-red 1950 Champion Convertible ($1,981 new). Also on display are Gran Turismo, Hawk, Avanti and Lark models from the early 1960s.

The 1904 Studebaker Model C is the company’s oldest surviving gasoline-powered automobile. It was introduced after two years of electric vehicle production. (The temporary exhibit Charged: The Rise, Fall and Resurgence of EVs, featuring eight electric cars produced by various companies from 1901 to 2008, runs through Oct. 2, 2022.)

One of the museum’s rarest pieces is a 1922 child’s hearse, which Studebaker built at a time when the infant mortality rate was high. White and shorter than a normal hearse, it was used only once for a funeral and then as a flower delivery truck. Visitors also will see military vehicles that Studebaker rolled out for the U.S. government during World Wars I and II. 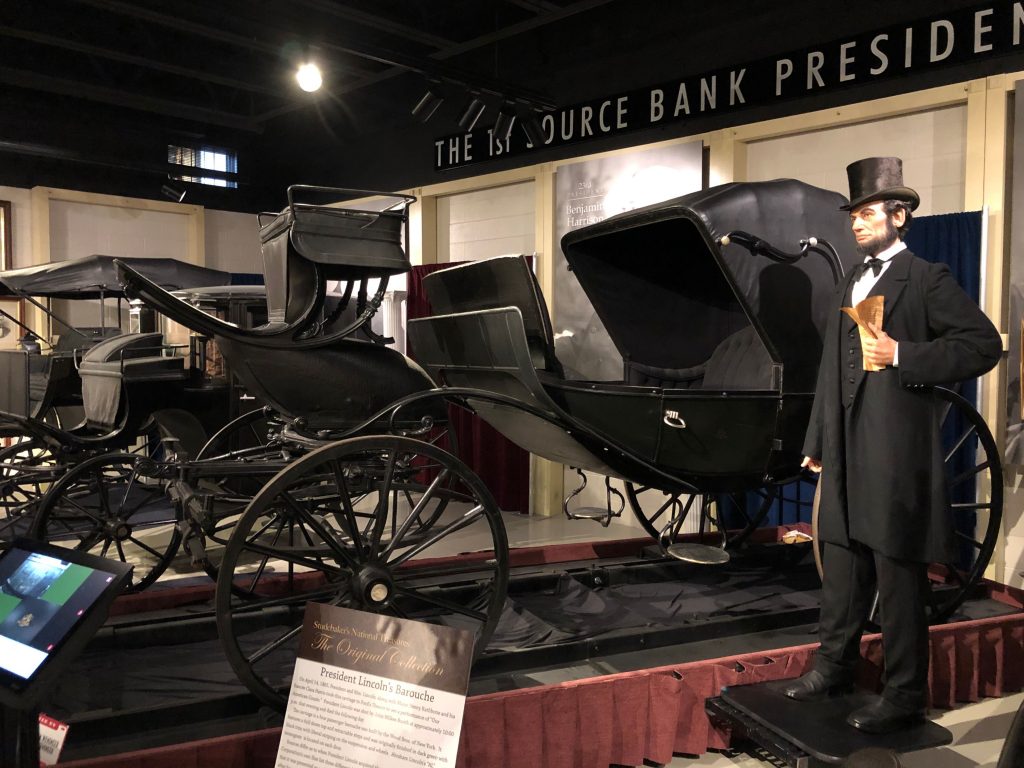 The carriage in which Abraham Lincoln rode to Ford’s Theater on the night of his assassination is one of four presidential carriages on display at the Studebaker National Museum in South Bend. (Randy Mink Photo)

The oldest vehicle in the museum’s collection is the horse-drawn carriage (not a Studebaker) that transported Abraham Lincoln to Ford’s Theatre on the night of his assassination on April 14, 1865. It is displayed with Studebaker carriages made for Presidents Benjamin Harrison and William McKinley, plus a non-Studebaker used by Ulysses S. Grant before and after he became president. (Acquiring these carriages for their historical importance, the Studebaker brothers displayed them at fairs and expositions across the country.)

Connected to the Studebaker repository is The History Museum, a treasure house of local history. The campus also includes the 1896 Oliver Mansion, perhaps the most opulent Gilded Age home in Indiana.

One gallery in The History Museum focuses on the South Bend Blue Sox, a team that played all 12 seasons in the All-American Girls Professional Baseball League (AAGPBL). The excellent collection of AAGPBL memorabilia tells the story of the women’s league that started during World War II and lasted until 1954, a chapter in sports history immortalized in the 1992 movie A League of Their Own. Directed by Penny Marshall, the film starred Geena Davis, Tom Hanks, Madonna, Lori Petty and Rosie O’Donnell. One exhibit area presents facts about the movie and behind-the-scenes tidbits. For sale in the museum gift shop are T-shirts inscribed “There’s No Crying in Baseball,” one of the greatest film quotes of all time (as voted by the American Film Institute). 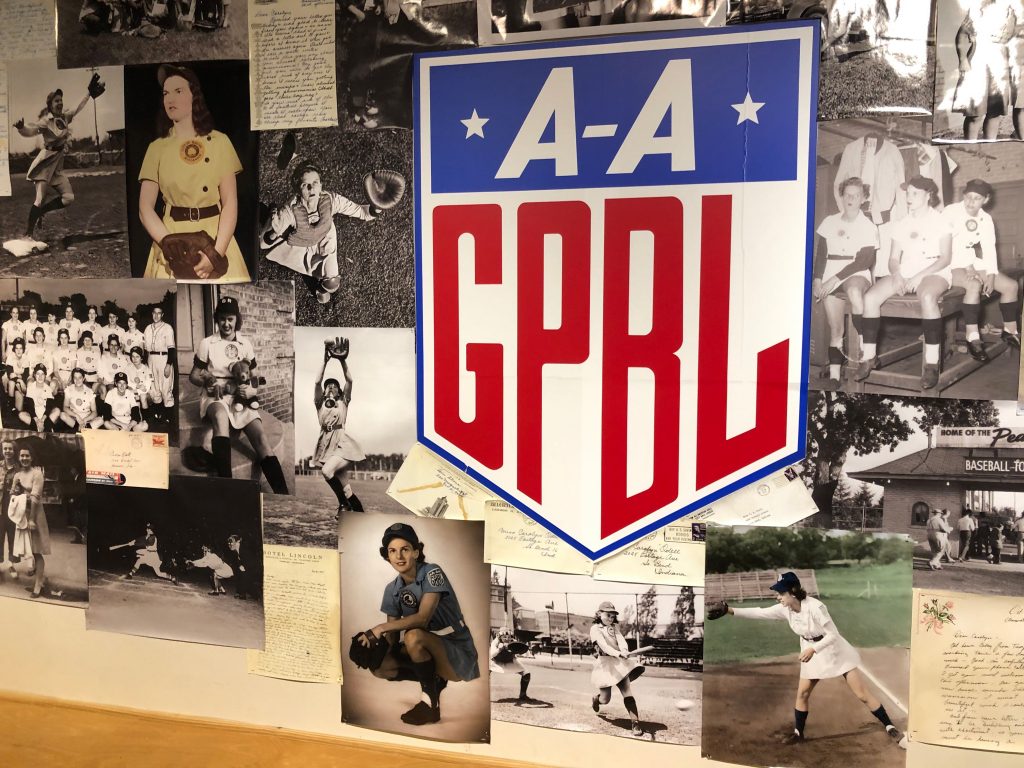 The History Museum in South Bend has an excellent exhibit on the All-American Girls Professional Baseball League (AAGPBL), which entertained fans from 1943-1954. (Randy Mink Photo)

The History Museum also sheds light on James D. Oliver, whose South Bend company earned the title “Plowmakers to the World.” By the 1880s, Oliver’s foundry was turning out one steel plow nearly every minute. By 1911 the plant employed 2,600 workers and had an annual capacity of 800,000 plows, which were sold throughout North America and overseas. The firm also made tractors, corn planters, cotton planters and other farming implements. A red-brick chimney bearing the word “Oliver,” a remnant of Oliver’s factory, still stands on the site, now the property of a brick-making plant.

Oliver’s wealth is reflected in the formidable granite mansion, a jewel of Romanesque Queen Anne architecture. Its carriage house connects the estate to The History Museum.

Tours of the 38-room, 14-fireplace home give the sense that the Olivers just moved out, as all the furniture and artifacts are original to the family. The last person to live there permanently died in 1972, but the house was staffed until 1987 for family members who came to visit. Items on display include a 400-year-old Russian icon and an interrogator’s chair from the Spanish Inquisition.

Highlighting a tour of Notre Dame’s campus is the mural The Word of Life, a mosaic masterpiece on the library’s exterior that depicts Jesus as a teacher and an inspiration to the apostles and scholars positioned at his feet. His outstretched arms pointing to the sky have given it the nickname “Touchdown Jesus.” 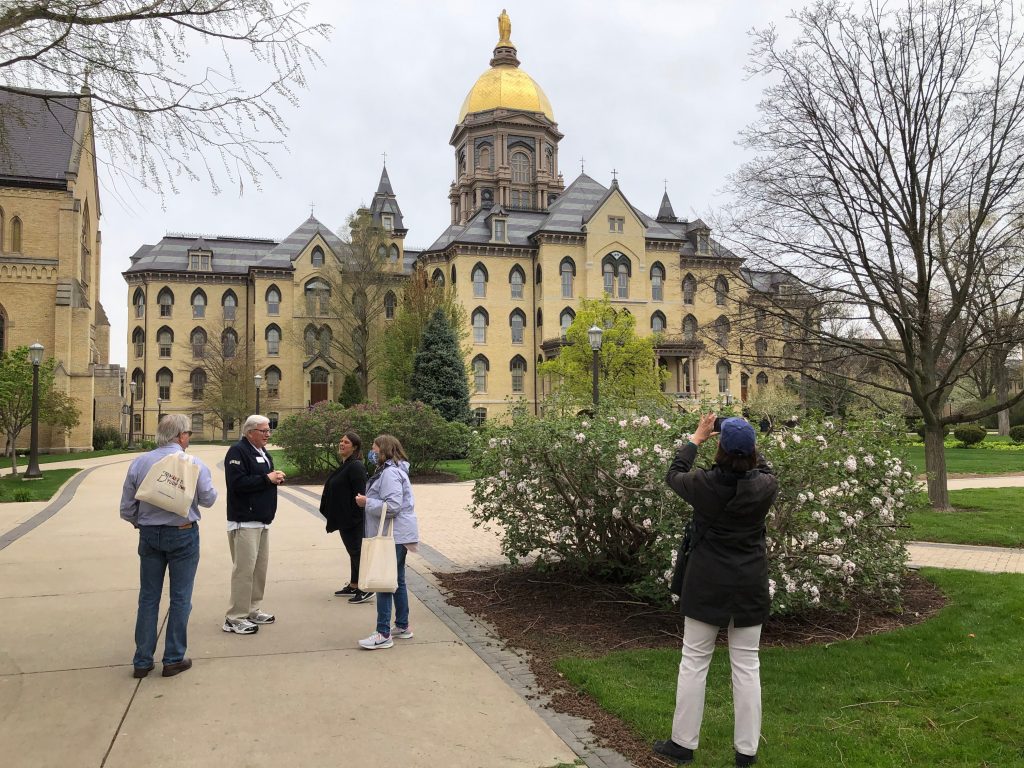 The administration building’s Golden Dome is one of many landmarks at the University of Notre Dame campus, where free walking tours start at the Eck Visitors Center. (Randy Mink Photo)

Free campus walking tours, which start at the Eck Visitors Center, also include the 1888 Basilica of the Sacred Heart, with its exquisite artwork and stained-glass windows; the Golden Dome administration building; and Grotto of Our Lady of Lourdes, a one-seventh replica of the renowned Marian apparition site in France. From my tour guide, I learned that 80 percent of Notre Dame students are Catholic and that some 19,000 students apply for the 2,000 freshman openings. Total enrollment is 12,000, with students hailing from all 50 states and 90 countries.

Our guide pointed out a sculpture of legendary football coach Knute Rockne that adorns one of the dormitories, and we passed by the Fighting Irish’s storied, 80,000-seat football stadium, the “house that Rockne built.” Rockne’s remarkable record of 105 wins and only five losses (from 1918-1930) propelled him to celebrity status and showered national attention on the school. After Rockne died in a 1931 plane crash at the age of 43, his funeral at the Basilica was internationally broadcast on radio. (In 1932, Studebaker introduced a small car called the Rockne.)

The university bookstore, next to the visitors center, has every kind of Notre Dame logo gear imaginable, and there’s another location at Eddy Street Commons, a buzzing commercial/residential development across from campus.

For baseball action, the place to be is Four Winds Field, home of the South Bend Cubs, a minor league affiliate of the Chicago Cubs. Families with kids like the ticket price ($12-$17), Fun Zone inflatables, and the between-innings contests and giveaways. For groups of 20 or more, the park has eight seating options, including outdoor party suites, the Budweiser Picnic Garden, Miller Lite Tiki Hut and Dairy Queen Home Run Porch. 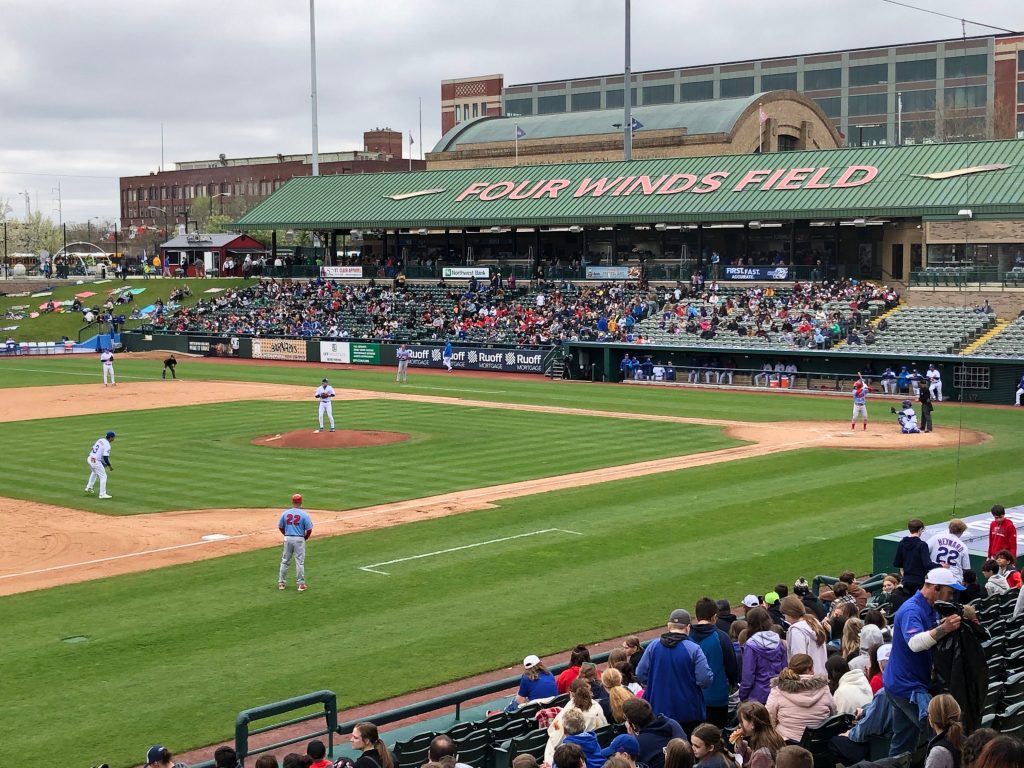 On a somewhat quirky note, the Cubs Den team store, looming beyond left field, occupies the former Sons of Israel Synagogue, a red-brick Jewish house of worship built in 1901. A giant “Toyota” logo sign, next to a Star of David, emblazons the roof. An elaborate 1910 chandelier hangs inside, and the old bima (podium area) serves as the checkout.

South Bend’s Potawatomi Zoo is another family-friendly attraction. New this year is the Giraffe Conservation Center, where you can feed lettuce to the four male giraffes. In the works for 2022 is an upgraded lion exhibit, and next year a black bear habitat will be unveiled.

A Must for Chocolate and Caramel Corn Lovers

Besides a Notre Dame or South Bend Cubs keepsake, perhaps the best souvenir of your trip is a sweet treat from South Bend Chocolate Company. The factory and outlet store on Sample Street has a full line of chocolates, popcorn, pretzels, cookies and other goodies, including marked-down seasonal items. Factory tours (hairnets required) include multiple samples and illuminate the whole chocolate-making process, from harvesting cacao beans to packaging the finished product. Watching workers sorting and enrobing chocolates at the conveyor belts will remind you of the famous candy factory episode on TV’s “I Love Lucy,” the one where Lucy and Ethel can’t keep up with the flood of bon bons coming their way. You can pose in a Lucy-Ethel cut-out at the company’s museum, a treasure trove of antique chocolate boxes and tins, advertisements and other industry memorabilia collected by owner Mark Tarner. 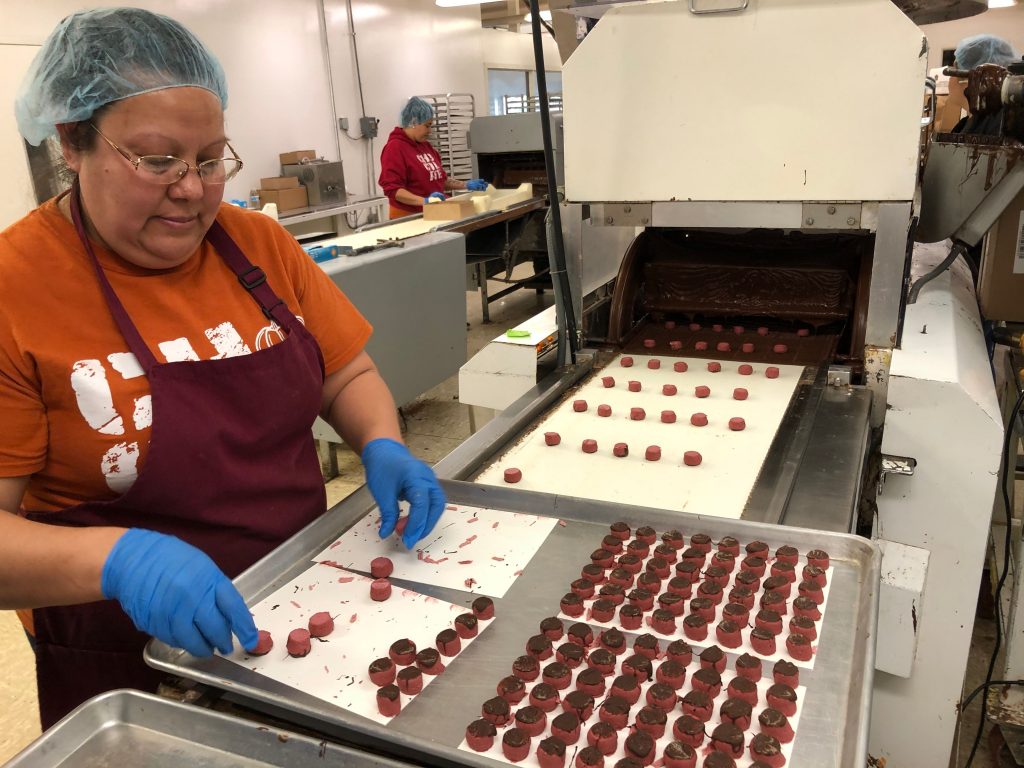 Tarner says the turtles and double-dipped chocolate peanuts top the list of popular candies. Also big are the malted milk balls, which come in flavors ranging from cherry and mint to pumpkin spice and peanut butter. He makes more than 30 varieties of chocolate-drizzled caramel corn, including a new “boozy” line with flavors like strawberry daiquiri and pina colada. The Notre Dame line features Irish Crunch caramel corn, with mint almonds; the Rockne, a mound of chocolate blended with coconut, almonds and cherry flavoring; and Golden Domers, a chocolate truffle sprinkled with 24-karat gold.

South Bend Chocolate Company produces more than 500 different chocolates and sweets, some of them under private labels. Its fresh-roasted coffees, along with ice cream, baked goods and sandwiches, are available in several company-owned and franchised chocolate cafes in Indiana (including downtown South Bend and Mishawaka’s University Park Mall), Michigan and Ohio.

In 2023, Tarner intends to vacate the current factory and open at a new location in South Bend. Plans for the site call for a dinosaur museum where Tarner, a passionate collector of dinosaur fossils, can show off the bones he has acquired on digs in Montana.

For tourism information on The Bend, check out the website of Visit South Bend Mishawaka.