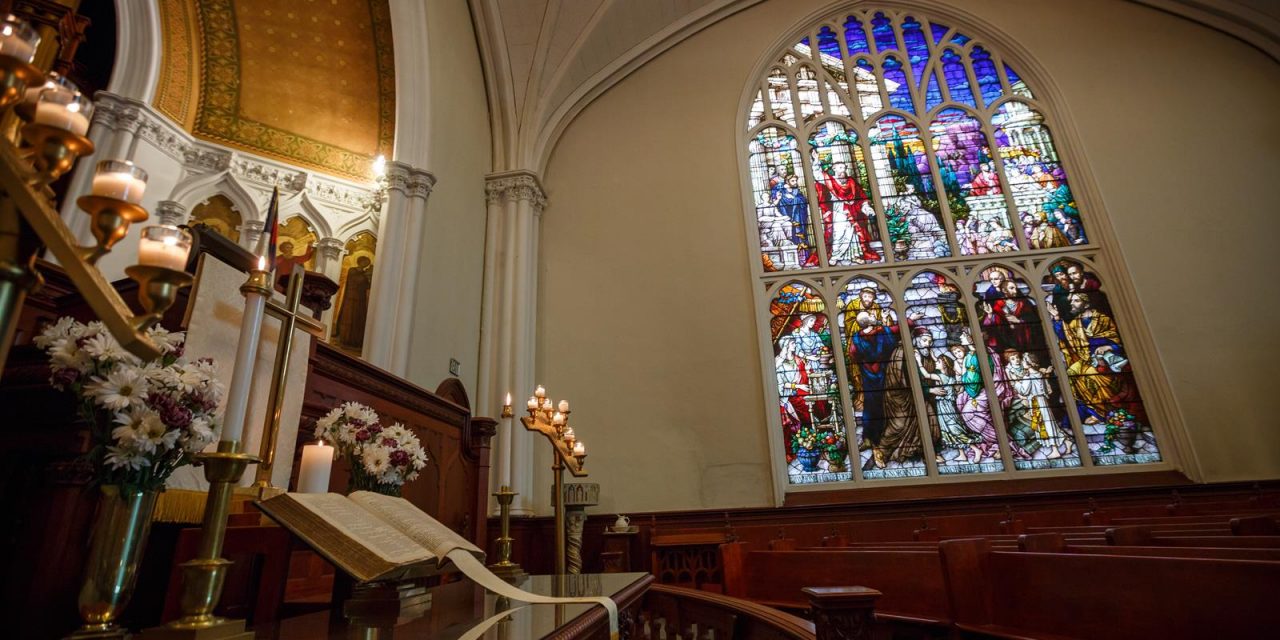 A religious holiday can be a rewarding one in many ways. Whether you are a family that prays together, a spiritual group of friends or a church congregation, follow the path of the Lord in South Bend, Indiana. Home to many significant churches, grottos and museums, check out these sacred sites in South Bend, Indiana and feel closer to your faith.

Founded in 1868, the Cathedral of Saint James has the distinction of being the oldest Episcopal congregation in South Bend. Dedicated to James, a disciple of Jesus, he preached in Samaria, Judea, and Spain. The cathedral church and the adjoining parish hall were placed on the National Register of Historic Places in 1985 and as an urban parish, draws membership from the whole of the South Bend, Mishawaka and Granger areas of North-Central Indiana.

Built in the neo-Gothic style in 1888, the Roman Catholic church, Basilica of the Sacred Heart, is one of the 57 chapels located on the campus of University of Notre Dame. A masterpiece in more ways than one, the church affords the status of being a minor basilica given to it by Pope John Paul II in 1992. Having the distinction of having the tallest university chapel in the country, the bell tower stands at 218 feet and is topped by a golden cross that is 12 feet high. There are three altars within the basilica including a bronze altar in Gothic Revival style and a Baroque altar. The interiors display murals by Vatican painter, Luigi Gregori. The walls have elaborate frescoes of saints and the vaulted ceiling depicts a starry sky with angels in its 12 bays.

There are 116 French stained-glass windows with saints, apostles, theologians and biblical scenes. The basilica has seven side chapels including the Chapel of the Holy Cross, the Chapel of Our Lady of Victory, the Chapel of Holy Angels, Lady Chapel, the Reliquary Chapel with the relics of the Twelve Apostles, the Brother Andre Chapel and the Holy Family Chapel. Mass is held twice daily in the basilica when the university is in session and once daily during breaks and there are three masses held every Sunday. Located within the University of Notre Dame, the Grotto of Our Lady of Lourdes is a scaled-down version of the famed French shrine where the Virgin Mary appeared to Saint Bernadette on 18 occasions in 1858. The idea of building the grotto was heralded by Notre Dame founder Father Edward Sorin. With a generous gift from Notre Dame alumni, Rev. Thomas Carroll, construction of the grotto started in 1896. While most of the stones are from boulders that were locally sourced, there is a piece of stone from the original French site on the right-hand side of the shrine directly below the statue of Mary.

A popular spot with the students of Notre Dame, the Grotto of Our Lady of Lourdes is where many Masses are celebrated and the Rosary is prayed every day at 6:45 p.m. The Basilica Museum showcases artifacts from the history of the University of Notre Dame and the Congregation of Holy Cross. Among the other items are liturgical vessels and chalices and a papal tiara from the 1850s donated by Pope Pius IX, which is only one of two in existence outside the Vatican. The Bishop’s Museum houses belongings of American bishops from the 19th century including ornate vestments, chalices, mitres, sashes and galeros. There is also the pectoral cross of the first Catholic bishop of the United States, Reverend John Carroll.

In 1916, several African American Catholic families moved to South Bend from Pascagoula, Mississippi. Seeking a place to worship, the families found a black parish that was established in 1928 by Father George Connor. By the 1930s, the number of parishioners jumped to 60 and they sought a new home. Since most of their members lived on the west side of South Bend, they chose their current site on West Washington Street and in June of 1941, Archbishop John Noll dedicated the St. Augustine Catholic Church, stressing in his sermon the 103-member parish had no color limitations. For more than 75 years, St. Augustine’s has welcomed a diverse congregation and led actions for civil rights.

Dating back to the late 1800s, Saint Patrick Church is an iconic landmark. Boasting beautiful interiors, the main altar is made of Italian marble. Depicted in the stained-glass windows above the altar are popular Catholic saints – Ambrose, Augustine, Thomas Aquinas, Patrick, Joseph and Brigid. As part of the National West Washington Historic District and across the street from historic St. Patrick Church, St. Hedwig Parish was founded in 1877 and is the mother parish of the Polish Catholic immigration that hit the South Bend area around the turn of the 19th century. St. Hedwig contains vibrant stain glass windows as well as impressive artwork in its sanctuary dome, vestibule windows, ceiling and loft.

A historical landmark, Saint Paul’s Memorial United Methodist Church had its beginnings in 1872 when a group of Methodist Christian congregated in a school. The school was unable to accommodate the growing number of followers and two members, Clem and Ann Studebaker built their own church. Named the Milburn Memorial Chapel, the chapel also became too small of a space for gatherings and eventually, in 1901, the Studebakers laid the corner stone of a new church. While on a trip to Europe, the Studebakers visited a glass works factory in Germany and were so impressed with the artistry that they suggested renaming the church to Saint Paul’s Memorial Church. Today, along with religious murals, the church houses one of the largest pipe organs in South Bend, featuring 2,400 pipes ranging from half an inch to 16 feet in height.