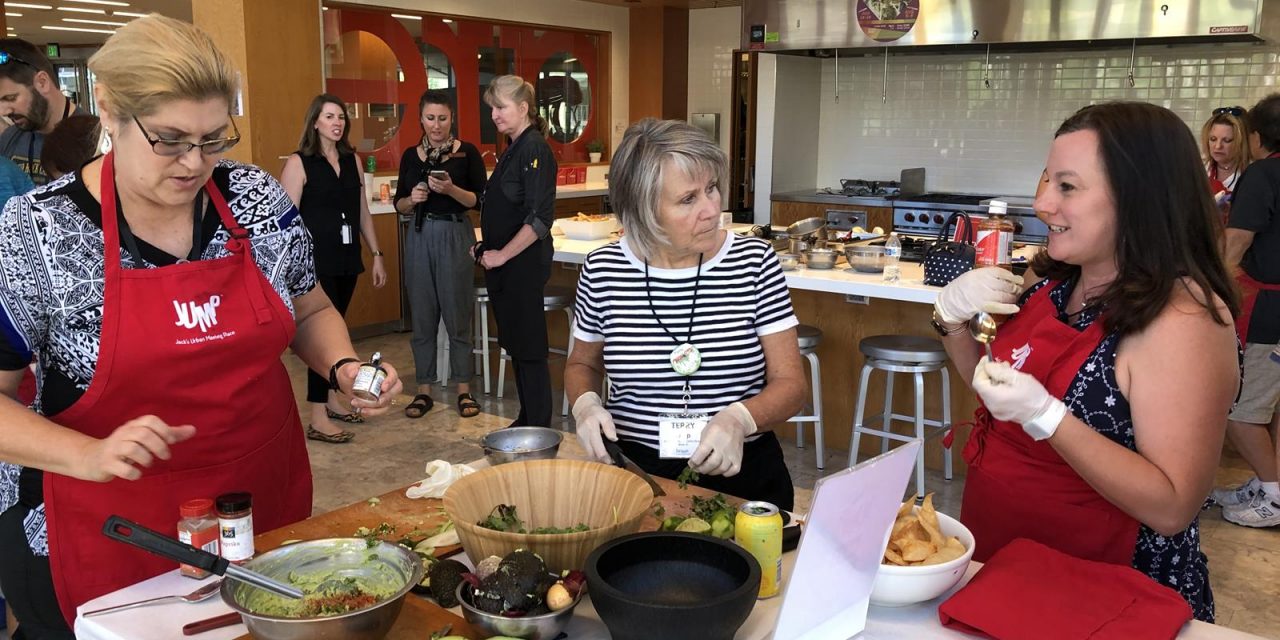 Lively, compact, safe and full of things to see and do, downtown Boise, Idaho surprises many first-time visitors. It certainly blew me away.

For example, I was captivated by the world-class Anne Frank memorial, an open-air space for contemplating the Holocaust and human rights issues. Steps away, at the Greenbelt along the Boise River, I watched people floating on inner tubes and paddling rafts and kayaks—right in the heart of downtown.

Also downtown is the Basque Block, where a museum and several eateries celebrate Basque culture and cuisine. The Boise area, I found out, has the largest concentration of Basques outside of Europe. Who knew?

For air travelers, arriving in Boise, Idaho is a breeze. It’s hard to believe the airport is less than 10 minutes from downtown. Everything in the city center, moreover, is within easy walking distance.

Downtown Boise has blossomed in the last decade, boasting a slew of new hotels, restaurants, brew pubs and wineries. Blessed with a pleasant climate, low cost of living, enviable cultural attractions and more than 100 parks, the “City of Trees” rates high in surveys of the most livable U.S. cities, and it’s one of the fastest-growing. The population of Boise itself is about 250,000, with some 710,000 in the metro area.

Soon after arriving at my downtown hotel, the Hampton Inn, I made a beeline to the Idaho Anne Frank Human Rights Memorial. I’ve always been interested in World War II, the Holocaust, and the story of the teenage Jewish girl whose family hid from the Nazis in Amsterdam until finally discovered and sent to concentration camps. The Diary of Anne Frank, written in her hiding place, is one of the most widely read books in the world and has been translated into more than 60 languages. 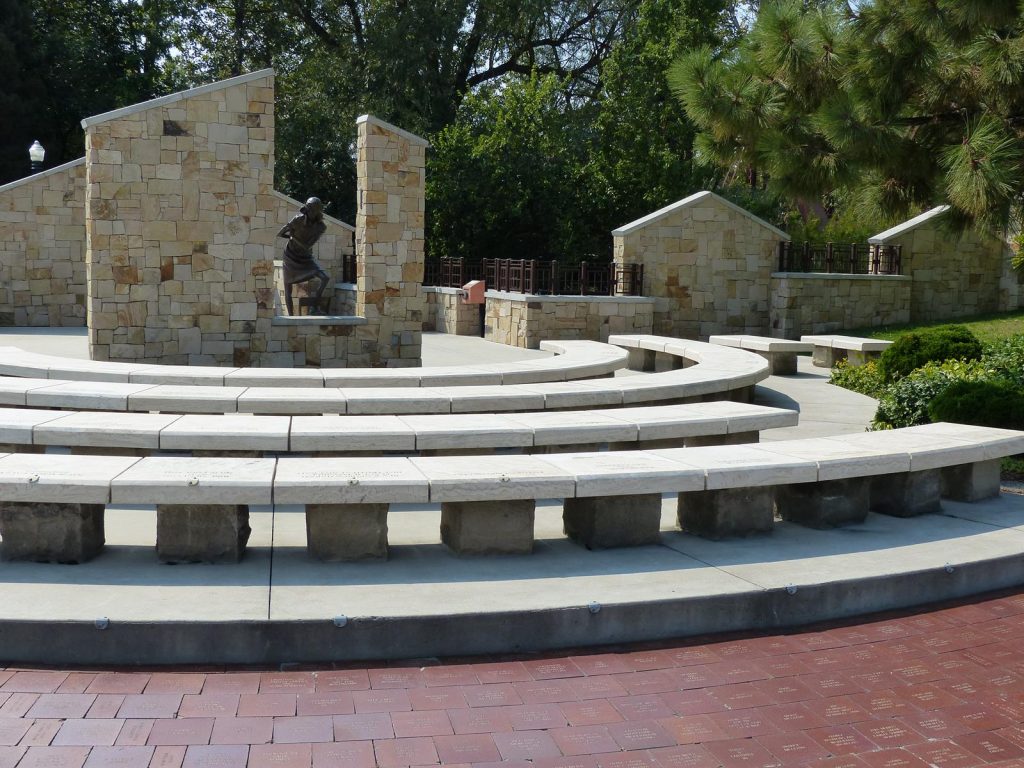 The centerpiece of the human rights memorial is a life-size bronze statue of Anne looking out from her upper-story refuge, diary in hand. Landscaped with gardens, trees, reflecting pools, waterfalls, benches, and massive slabs of limestone and sandstone, the peaceful retreat features marble walls etched with 80-plus quotations from Anne and other well-known figures who fought against injustice, oppression and hate. Familiar names include Mahatma Gandhi, Martin Luther King Jr., Mother Teresa and Elie Wiesel.

Emblazoned on one wall is this passage from Anne’s diary: “It’s difficult in times like these: ideals, dreams and cherished hopes rise within us, only to be crushed by grim realities. It’s a wonder I haven’t abandoned all my ideals, they seem so absurd and impractical. Yet I cling to them because I still believe, in spite of everything, that people are truly good at heart.” (July 15, 1944).

The site contains trees planted by a childhood friend of Anne’s and by Miep Gies, one of the Dutch citizens who hid the Frank family and four other Jews. She saved the diary and gave it to Otto Frank, Anne’s father, the only family member who survived the Holocaust.

Audio stations on the grounds provide short messages on the life of Anne Frank, the Holocaust and WWII, and the memorial itself. Visitors also can hear thoughts from Holocaust survivor Rose Beal, who spent the last 10 years of her life in Boise.

In an open classroom with benches seating up to 50, presentations can be arranged by groups. Morning coffee and pastries or a catered lunch also can be provided.

Just outside the riverside entrance to the Anne Frank memorial is a bike/pedestrian path on the 25-mile Boise River Greenbelt, which connects 12 area parks. From one of the bridges, I watched people paddling kayaks or floating lazily down the river on tubes. 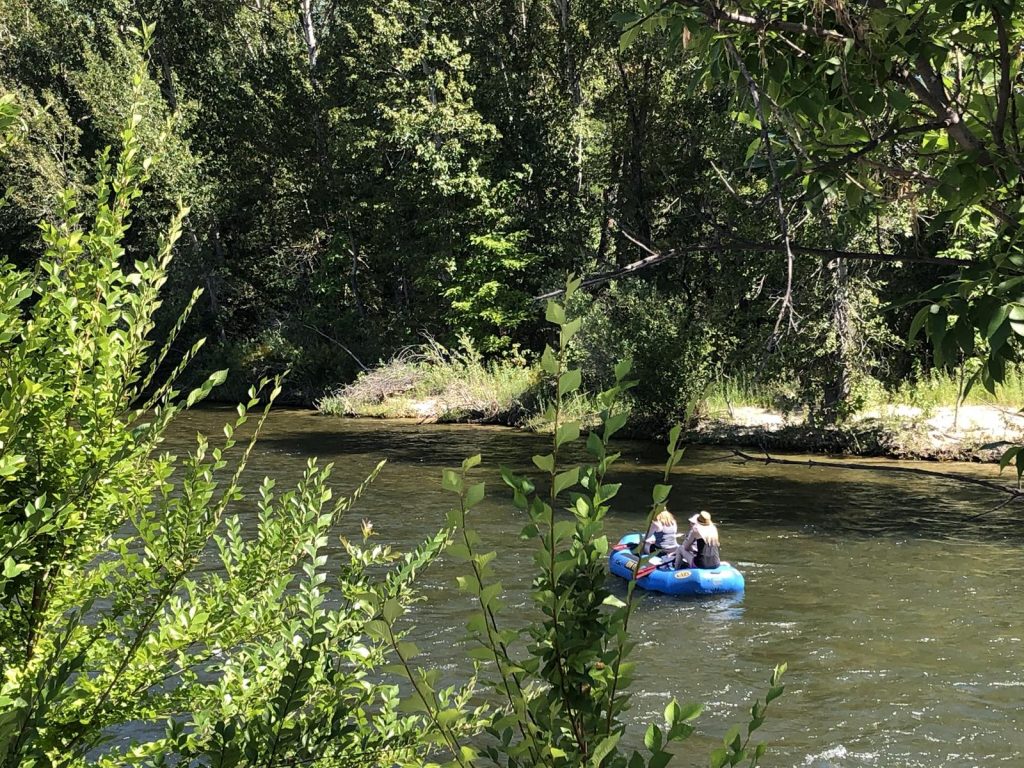 A walk across the river reveals the campus of Boise State University, famed for its football stadium’s Blue Turf.  On our group’s stadium tour, the blue playing-field surface, unfortunately, was covered up for a concert scheduled that night. With 25,000 students, BSU is the largest university in Idaho and one of Boise’s top three employers.

The Basque Block, centered on Grove Street between Sixth Street and Capitol Boulevard, features a number of eateries and historical points of interest.

The Basque Museum and Cultural Center, the only Basque museum in the U.S., tells the story of the ethnic group that has inhabited southwestern France and northern Spain for centuries. Basques started immigrating to the American West in the late 19th century, many of them finding work as sheepherders.

Tours of the Basque Block can include the museum, a restored boarding house that served Basque immigrants and an indoor ball court (fronton) for pelota (played with a wooden racquet and hard rubber ball). A colorful mural on Capitol Boulevard, depicting a sheep camp and Basque dancing, history and religion, makes a good photo op. 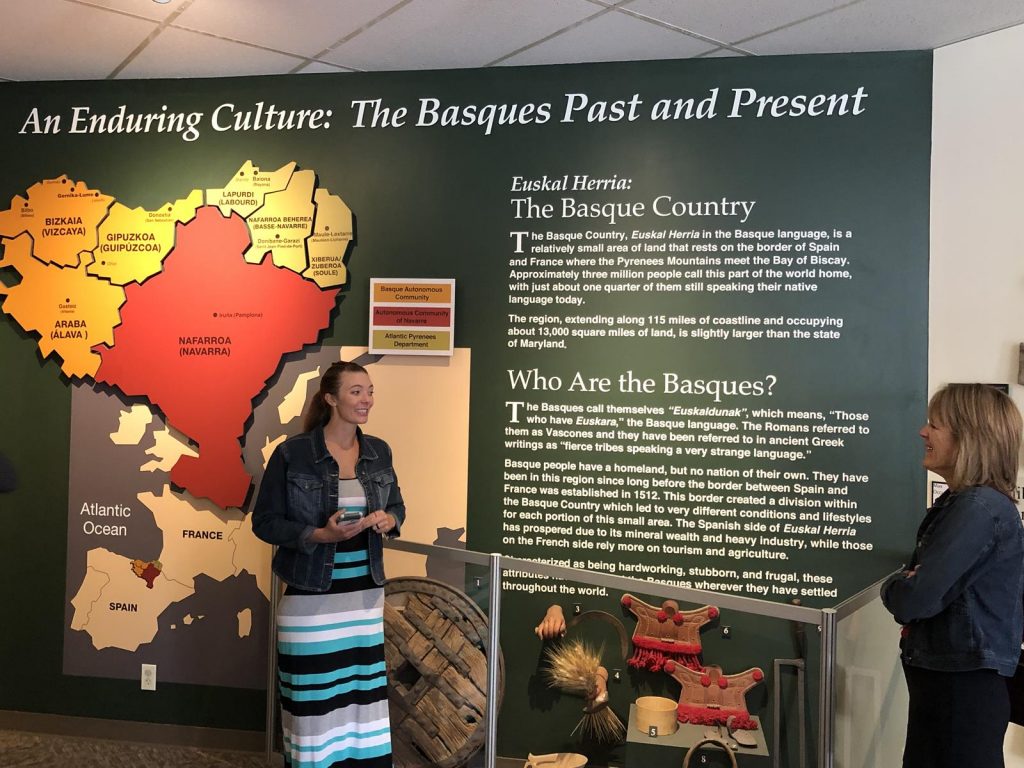 For a taste of Basque cuisine, drop into The Basque Market, a food shop/cafe that specializes in the products of Spain, Spanish Basque Country and Portugal. It’s a good place to sit down with some wine and sample Basque cheeses and sausages or pintxos (the Basque term for tapas). On Wednesdays and Fridays, The Basque Market dishes up paella on the street until it’s gone. For groups, it can arrange a cooking class or meal accompanied by a Basque dance performance.

Next door to The Basque Market, Leku Ona advertises “fine Basque dining and spirits.” The restaurant is in a hotel that once housed a Basque social club. Also on the Basque Block is Bar Gernika, a pub/eatery named for the Basque town bombed in 1937 during the Spanish Civil War. The menu lists Basque-inspired items such as lamb stew, lamb kabobs, croquetas, and chorizo and solomo (marinated pork loin) sandwiches.

The Grove Plaza, across the street from the Basque Block, is the hub of downtown. Surrounded by the Boise Centre’s convention halls, the plaza is alive with restaurants and bars offering outdoor seating. Kids splash in its fountains, and special events are held there. The complex also includes CenturyLink Arena (for trade shows, basketball and hockey) and The Grove Hotel.

Another downtown plaza spreads out before JUMP, a glass-walled building that hosts creative events and houses the headquarters of the J.R. Simplot Company. Entrepreneur Jack Simplot (1909-2008) was a potato baron who made his fortune supplying frozen french fries to McDonald’s, and he founded other businesses as well. The building’s enclosed five-story slide deposits brave souls in the plaza—just one example of the fun that awaits at JUMP (Jack’s Urban Meeting Place). Groups can book competitive cooking classes in JUMP’s demonstration kitchens. Displayed on the plaza are 53 antique tractors in Jack Simplot’s collection of more than 100.

When it’s time to eat, folks head to a pedestrianized stretch of Eighth Street and its bevy of sidewalk restaurants. One popular spot is Diablo & Sons Saloon, an old-time bar that offers 30 beers on draft and an extensive taco menu.

Lending a bohemian touch to downtown Boise, Idaho is a collection of wild murals—Freak Alley Gallery—in an alley that spans a block between Eighth and Ninth streets. They’re redone every year. 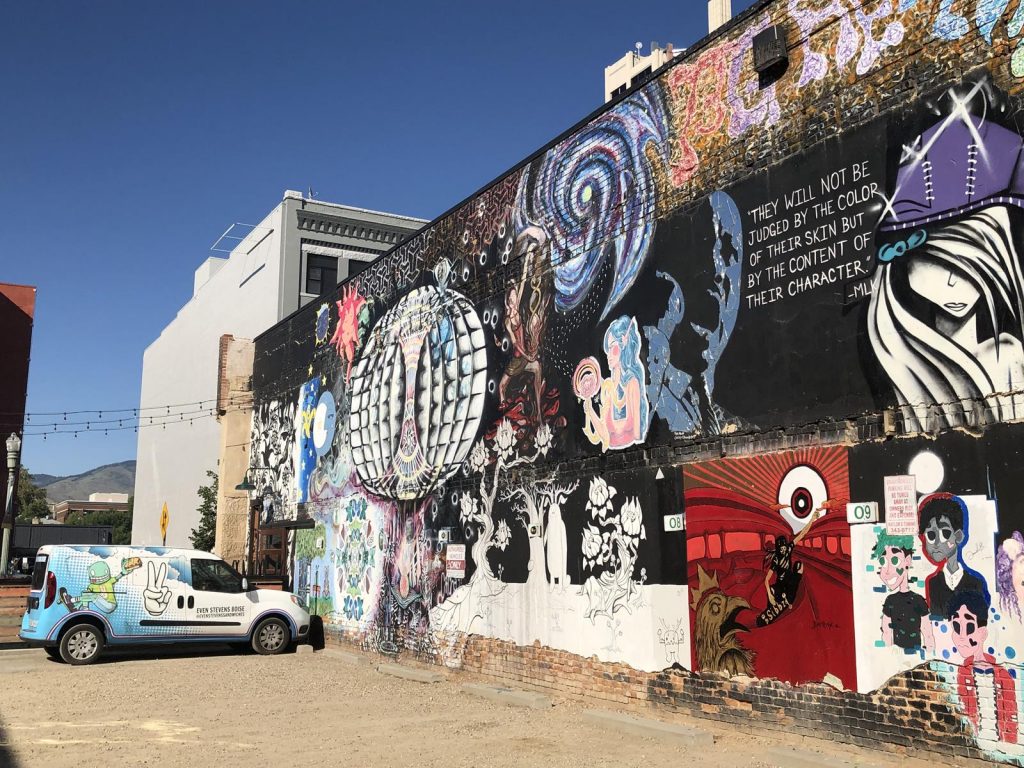 For a true taste of Idaho, it makes sense to pop into Boise Fry Co. for some french fries made from Idaho russet or other potato varieties, all fried in sunflower oil. Half the fun is choosing from the wide selection of homemade seasonings and sauces (like blueberry ketchup and garlic aioli). Pair the fries with a bison and beef burger.

Just around the corner from my hotel, I discovered the Idaho Candy Company store and factory. Founded in 1901, the confectionery has been making goodies in the same building since 1909 and still uses some of the original machines and copper kettles. The retail store across from the business office offers free samples of its candy bars and sells them individually and by the box. The famous Idaho Spud, a favorite since 1918, consists of light cocoa-flavored marshmallow drenched in dark chocolate and sprinkled with coconut. Huckleberry Gems are chocolate-covered marshmallow cremes, and Cherry Cocktail bars (around since 1926) contain a whole maraschino cherry and liquid filling coated in milk chocolate and crushed peanuts. The store also has displays on company history and a CNBC video on its operations.

The Idaho State Capitol, capped by a magnificent dome built from 1905-1912 and decorated inside with marble of all kinds, can be explored on a guided or self-guided basis. Visitors can enter the public galleries of the Senate and House chambers, and they are welcome to sit and pose for a photo at the ceremonial desk used by governors since 1919. On the fourth floor stands an equestrian statue of George Washington carved from a single piece of pine and covered in gold leaf. The lower-level visitor center has exhibit panels on state government and history. 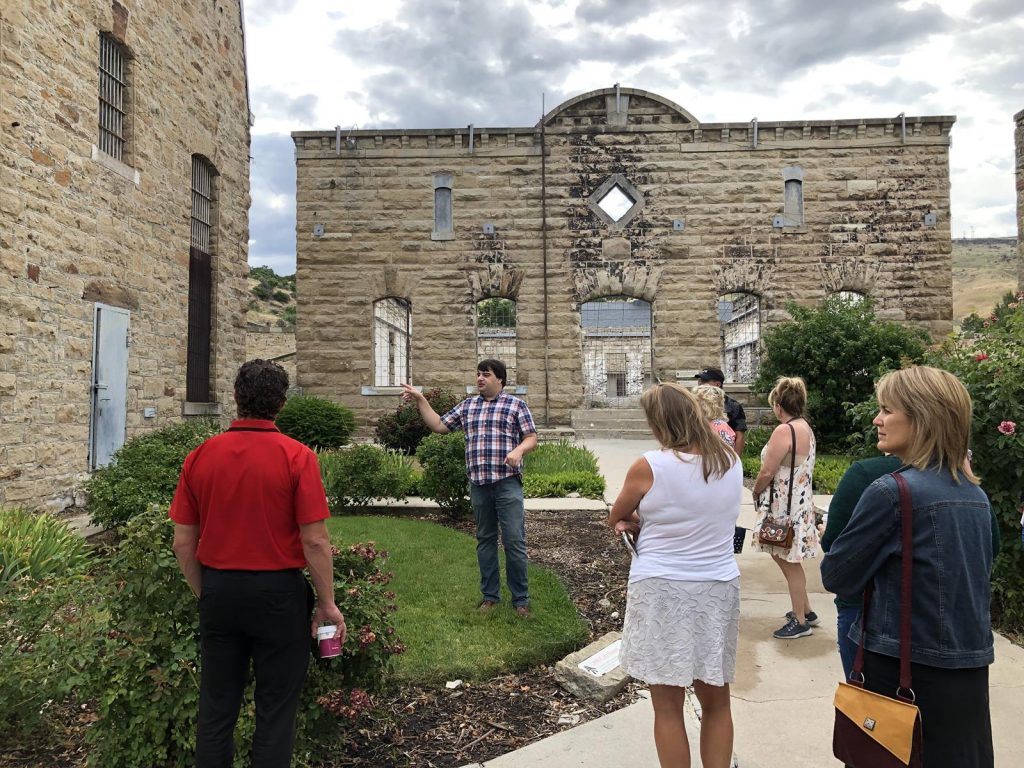 A tour of the Old Idaho Penitentiary, east of downtown, provides a fascinating look at this former prison, which confined bad guys from 1872 to 1973. The guides tell stories of escapes and attempts, executions by hanging (there were nine) and the crimes committed (including assassination of a governor) by notorious inmates. Guests can visit the gallows room, go into cells and get a peek at solitary confinement. A frequent site for paranormal investigations, the old prison is considered the most haunted place in Idaho. Next door is the Idaho Botanical Garden, which has a variety of themed gardens.