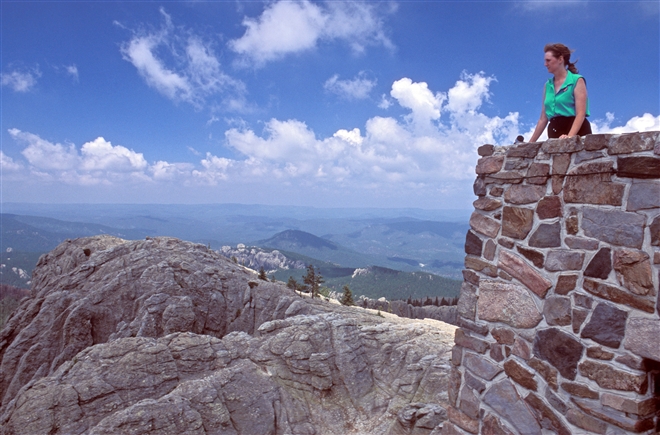 From one side of the state to the other, South Dakota abounds with group-friendly options. Whether your travelers are looking for urban pleasures or outdoor adventure, this land offers a diverse range of landscapes, from mountains and farm fields to mighty rivers and vast lakes.

Sioux Falls, anchoring the southeastern corner of the state, tempts itinerary planners with its wide array of attractions. A new downtown eye-catcher is the Arc of Dreams, a monumental stainless steel sculpture spanning the Big Sioux River. A 15-foot gap at the center of the iconic landmark towers 85 feet above the water and represents the leap of faith that visionaries take to make their dreams come true. Nearly the length of a football field, the Arc serves as a capstone for the renowned SculptureWalk, an outdoor art museum that rotates a variety of new sculptures every year.

North of downtown, groups will want to visit Falls Park, where an outdoor observation deck offers 360-degree views of the river, falls and skyline of South Dakota’s largest city. Covering 123 acres, the park sees an average of 7,400 gallons of water drop 100 feet over the course of the falls each second. The Overlook Cafe is located in the former Sioux Falls Light and Power Company hydroelectric plant.

The Washington Pavilion of Arts and Science, another Sioux Falls gem, is a cultural and entertainment center housed in a former high school building. Broadway shows, plus dance, musical and vocal performances, take the stage at the Husby Performing Arts Center. Giant-screen movies are shown in the Wells Fargo CineDome Theater. The pavilion’s Kirby Science Discovery Center has more than 100 interactive exhibits, while changing art exhibits and a permanent collection of art grace the Visual Arts Center.

When South Dakota is mentioned as a vacation destination, the Black Hills immediately comes to mind. This rugged section of western South Dakota claims one of America’s most famous shrines—iconic Mount Rushmore—and offers many other crowd-pleasers as well.

Chiseled in granite, the colossal heads of George Washington, Abraham Lincoln, Theodore Roosevelt and Thomas Jefferson at Mount Rushmore National Memorial represent one of the largest pieces of sculpture ever created. Each face is 60 feet high. Excellent views are available from the Grand View Terrace or, for a closer look, the trail along the base of the mountain. 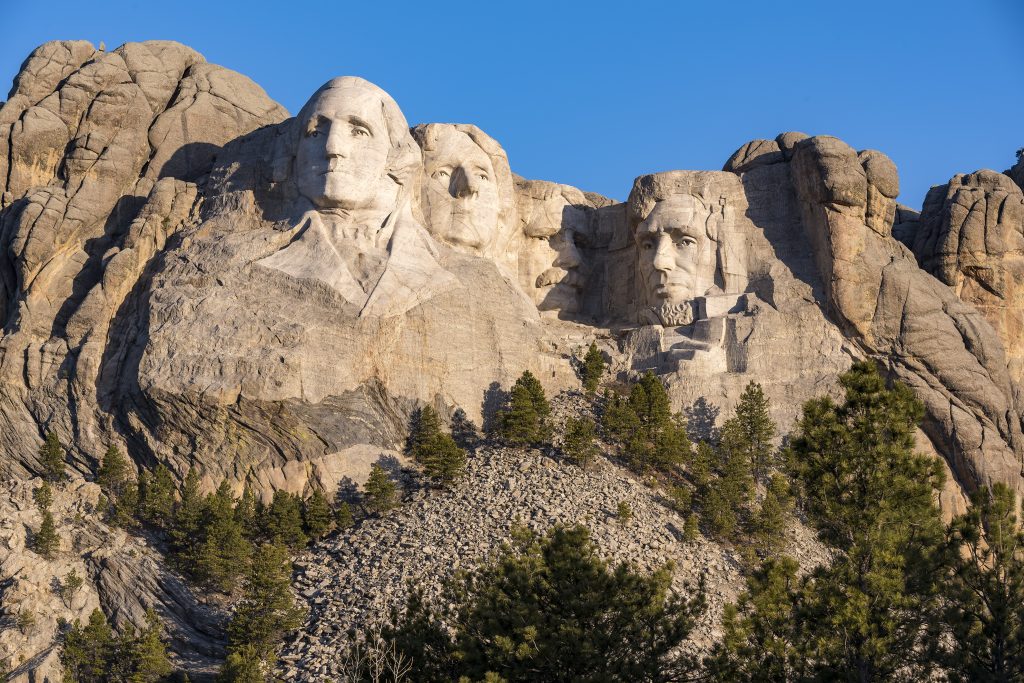 Equally impressive is the Crazy Horse Memorial, near Custer. The giant mountain sculpture begun in 1948 by Korczak Ziolkowski at the request of Lakota chiefs will be the largest statue in the world upon completion. Representing Native Americans of all tribes, the carving will depict the warrior Crazy Horse astride his horse. The nine-storyhigh face is complete, and visitors can learn about ongoing work through exhibits, a movie and scale models in the big visitor complex, which includes the Indian Museum of North America. 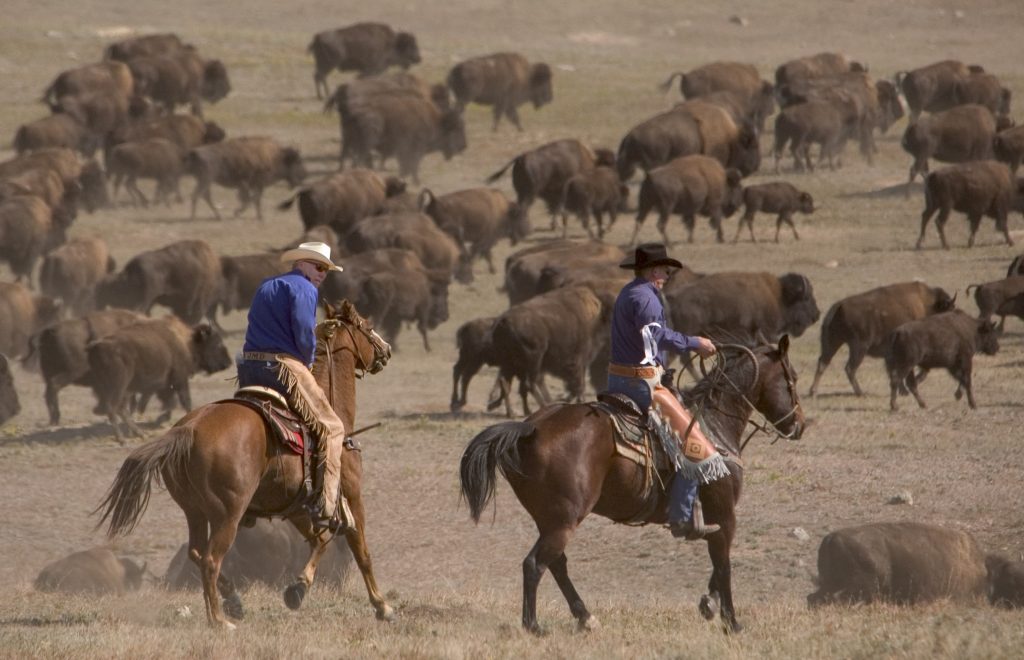 In the northern Black Hills, the town of Deadwood captures the spirit of the American West. Founded in 1876 as a mining camp, it was built on gold, gambling and gunpowder. Deadwood, once known as the wildest and wooliest town in the West, today is one of the largest historic preservation projects in the nation. Old storefronts and warehouses along the brick-paved streets are now casinos, restaurants and hotels. Tourists can take underground tours at Broken Boot Gold Mine and visit the graves of Calamity Jane and Wild Bill Hickok at Mount Moriah Cemetery (Boot Hill).

Near the town of Hot Springs in the southern Black Hills, groups can tour The Mammoth Site, a working paleontological site and museum, and mingle with wild mustangs on a bus tour of Black Hills Wild Horse Sanctuary. Not far away is Wind Cave National Park, which offers tours of the world’s fourth-longest cave system.

Also in the Black Hills is Jewel Cave National Monument, the third-longest cave in the world. Ranger-led tours spotlight the glittering calcite crystals for which the cave is named.

A short drive east of the Black Hills takes visitors to Badlands National Park. Stark and surreal, this other-worldly realm of flattopped buttes, deep canyons and sculptured pinnacles preserves the past in layers of whitish sandstone painted with bands of pink and brown. Rich in fossils and carved by eons of erosion, the austere land, often described as a moonscape, is both barren and beautiful. In nearby Wall, be sure to schedule a stop at Wall Drug, one of America’s most famous roadside attractions. The dining-retail complex is packed with Western merchandise and other souvenirs.

Rapid City serves as the gateway to the Black Hills and Badlands. The national parks and other attractions are less than an hour away. The city itself boasts fine restaurants, a slew of hotels, art galleries and plenty of shopping opportunities. Rapid City’s Journey Museum & Learning Center, telling the story of the Black Hills and Native American history through interactive displays, offers a good introduction to this special part of the world. 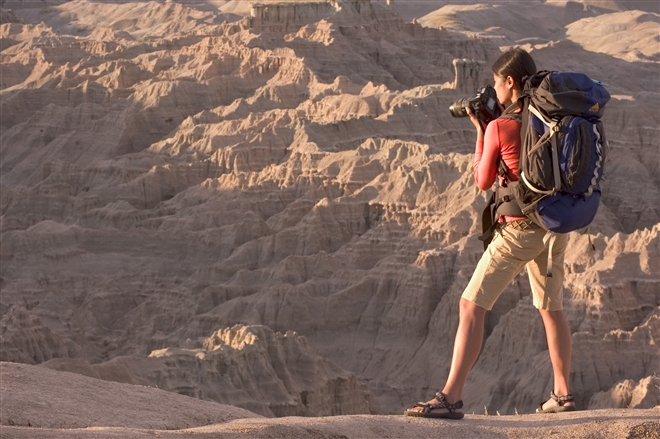