One of the fastest-growing segments of the cruise industry continues to be river cruising. More river cruise ships are being introduced this year than ever before. 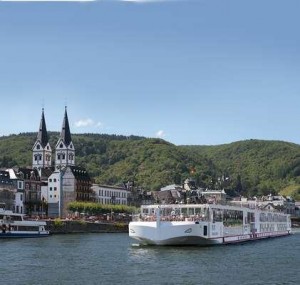 Another trend has been the addition of indoor and outdoor viewing areas at both the stern and bow. And still another has been the incorporation of ornate chandeliers and skylights into the entrance lobbies.

The newest river cruise ships in the Europe market reflect a contemporary design – from Viking River Cruises’ Longships and Avalon Waterways’ Suite Ships to the newest ones from AmaWaterways and Uniworld Boutique River Cruise Collection. 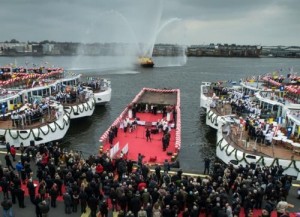 A fun cruise industry first took place on March 20, when Viking River Cruises set a world record with the christening of 10 new Viking Longships in one mass ceremony held in Amsterdam. These included the Viking Aegir, Viking Atla, Viking Bragi, Viking Embla, Viking Forsetti, Viking Jarl, Viking Rinda, Viking Skadi, Viking Tor and Viking Var. Not all the ships were in Amsterdam for the christening. Christening ceremonies for six were actually held in the Neptun shipyard in Rostock, Germany. Four of those vessels are being finalized, while two are still in dry dock.

As far as the Guinness World Record for “The Most Ships Inaugurated in One Day by One Company,” it was actually set for eight ships, since two of the Viking Longships actually entered service in 2012 without an official christening ceremony.

The Viking Longships each accommodate 190 guests with 95 staterooms. These sleek ships have large windows that provide an abundance of sunlight and their designs are contemporary with some classic Scandinavian touches. Coffee, teas, soft drinks, and house wines and beers are included with lunch and dinner. In addition, Viking River Cruises has a “Silver Spirits” beverage package that guests can order if they want a wider selection of premium wines and beers. And there are two dining areas – a traditional restaurant, as well as the Aquavit Terrace, which offers more casual breakfast and lunch buffets daily. 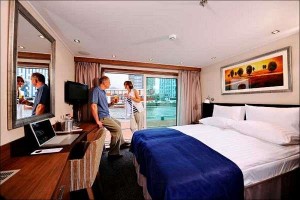 In 2013 Avalon Waterways introduces two more of their Suite Ships, the Avalon Artistry II in April and Avalon Expression in May. In 2014, three more Suite Ships – the Avalon Illumination, Avalon Poetry II and Avalon Impression – will debut.  The Suite Ships, which offer mostly Panorama Suites (200 square feet) with wall-to-wall windows that can be transformed into open-air balconies, feature a Sky Deck whirlpool and outdoor bistro for grilled lunches. The dining room and main lounge have sweeping views, along with a club. Other onboard amenities include complimentary Wi-Fi and an expanded fitness center.

Uniworld Boutique River Cruise Collection’s Queen Isabel has features that differ from some of its other ships. In addition to two 323-square-foot suites, there are – 18 junior suites measuring 215 square fee and 39 staterooms measuring 161 square feet. Staterooms and suites on the Upper Deck have full balconies, while those on Main Deck have French balconies and those on the Lower Deck feature panoramic windows. The Queen Isabel has a swimming pool as well as free Internet and Wi-Fi access. She is sailing on Portugal’s Douro River from March through November.

Another special note about Uniworld: In 2014 the line will increase the all-inclusive features on its Europe vessels by including unlimited spirits, wine and beer as well as gratuities. Tipping will be included in the price, even for pre- and post-cruise extensions. Uniworld already includes a wide range of features – hosted excursions, Internet and Wi-Fi, non-alcoholic beverages as well as wine and beer during lunch and dinner, and arrival and departure day transfers. 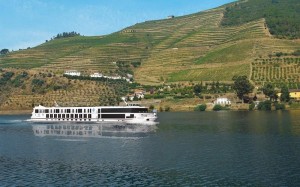 Later this year, AmaWaterways will be christening its new AmaPrima, a sister ship to the AmaCerto, which debuted in 2012.  The AmaPrima features five dining venues – main dining room, two wine bar venues, a casual al fresco bistro located forward, an intimate Chef’s Table restaurant with its own chef, and lunch outdoors offered on select days available on the Sun Deck.

Scenic Cruises introduces its seventh Space Ship, the Scenic Jewel, in April, and she’ll be sailing on the Rhine, Main and Danube rivers. The Scenic Jewel is a 170- passenger ship and has suites with private, full-size balconies that can be closed off, allowing the space to still be used in inclement weather. Scenic Cruises offers unlimited complimentary beverages (top-shelf brands are additional), butler service for every guest, complimentary Wi-Fi and themed dinners with entertainment.

In 2014, Viking River Cruises plans to christen 12 new Longships, all which will sail on European itineraries. So, it appears they’ll be breaking their own world record.

It’s About the Destination

The growing river cruising options on European waterways provides some unique benefits to guests. The picturesque riverscape is always in view, from forests and fields to medieval castles, palaces and baroque churches, and charming towns and cities literally fringe the banks. So, river cruising makes it easier to see these destinations and embrace the culture.

As far as testing the river waters for your group?  People who’ve done ocean cruising but are now looking for something different and like the “all-inclusive” feel tend to be great fits for river cruising. Another advantage for your group is the convenience of seeing numerous cities without having to switch into a different hotel each night. With so many new options available, it might be time to consider a river cruise as a new group option or make a return visit on a new river cruise ship.