The longest fortress in Europe and the world’s largest cathedral organ are just two of the sights that await tourists in the corner of Eastern Bavaria hugging the border with Austria. Cities like Burghausen, Passau and Altötting brim with Old World charm and offer travelers in Southeastern Germany the allure of venturing off the beaten path. 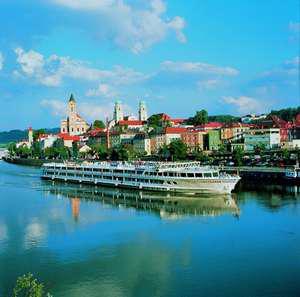 Passau on the Danube

Best known is Passau, the “City on Three Rivers.” An embarkation point and port of call on Danube River cruises, Passau (pop. 50,000) is located at the confluence of rivers flowing from three directions—the murky brown Danube from the west, the greenish Inn from the south and the dark Ilz from the north. The number three pops up again in regard to the regional geography—Passau lies in the heart of the tri-country region of Lower Bavaria, Upper Austria and Bohemia in the Czech Republic, between three major cities—Munich, Prague and Vienna. The Czech border is about 35 miles away.

The rivers’ confluence point is at the tip of the narrow peninsula that encompasses the Old Town, or Altstadt, a compact area of winding lanes and picturesque squares flanked by 17th and 18th buildings. The city’s Gothic and Romanesque foundations date back to medieval times, but Passau was rebuilt with Italian Baroque influences following the Great Fire of 1662.

Dominating the skyline is St. Stephan’s Cathedral, or the Dom, its three towers—the number three again—capped by green onion domes. From the Middle Ages to the early 19th century, Passau was the seat of power for prince-bishops of the largest diocese in the Holy Roman Empire. Situated on the peninsula’s highest point, the Dom is the largest Baroque church north of the Alps. Its ceiling frescoes and more than 1,000 stucco statues are the work of Italian Baroque artists.

The cathedral organ, reputedly the largest Catholic church organ in the world, is actually five organs, including one hidden in the attic. With 233 stops, 17,974 pipes and 90 miles of cable, it can be operated by one person from the main console. For a heavenly acoustical experience, it’s worth juggling your schedule to attend an organ recital (weekdays at noon, Thursdays at 7:30 p.m. from May to October).

The Passau Glass Museum, boasting a huge collection of Bohemian, Silesian and Bavarian crystal and glass from 1650 to 1950, is another point of interest in the Altstadt. More than 15,000 pieces from this renowned glass-making region of Central Europe are displayed in 380 cases in 36 rooms. 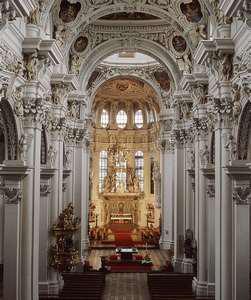 At the very nib of the Altstadt peninsula is the Dreiflusseck (Three Rivers Corner), a little park with a sign marking the confluence. Docked along the banks of the Danube, Europe’s second longest river (after the Volga), you may see the long-distance, luxury riverboats of companies like Viking River Cruises. Local excursion vessels offer sightseeing trips.

For a typical Bavarian meal in vintage surroundings, try the Helig-Geist Stiftschenke. Wienerschnitzel, venison, dumplings and other local favorites are served in the wood-paneled dining rooms and in the leafy beer garden.

The meeting of the rivers—and the Altstadt—is best viewed from the ramparts of the Veste Oberhaus, a 13th century fortress built by the prince-bishops high above the Danube. Museum exhibits include suits of armor and medieval weapons. (passau.de)

The town of Burghausen (pop, 18,000), boasting Europe’s longest castle complex, offers equally stunning panoramas and its own fairy-tale magic. Rarely visited by American tourists, it is not even mentioned in many guidebooks on Germany.

Stretching some 3,400 feet across a ridge looking straight down on the town’s medieval quarter and the Salzach River, rustic Burghausen Castle has it all—towers, moats, drawbridges, arched gateways, courtyards and battlements. The fortress’s present appearance dates from the 13th century. For 250 years it was the second residence (after Landshut) of the dukes of Bavaria. Looking out on the forested foothills of the Alps, the castle still seems to protect the storybook town below.

Steep walking paths connect the hilltop castle to the town, which prospered for centuries from the salt trade. Tourists can spend several hours looking into churches, admiring the rows of gabled merchant homes painted in bright pastels, and relaxing over apple or plum cake at a sidewalk cafe. Scenic river excursions on replica medieval salt barges are available. Just a short walk across the river, the Austrian town of Ach an der Salzach affords good views of Burghausen’s photogenic castle-and-town ensemble. (burghausen.de) 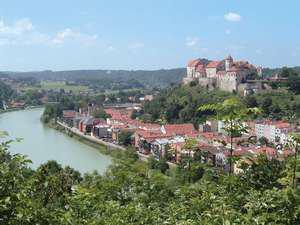 Eastern Bavaria also is home to the town of Altötting, Germany’s most significant place of pilgrimage venerating the Virgin Mary. More than a million pilgrims a year visit the Chapel of Grace (built around 700) and its Black Madonna. As history tells it, a child drowned in a nearby river in 1489 and his mother took his body to the altar at the foot of a wooden statue of the Black Madonna. He was miraculously revived, and the news spread quickly across the country. The shrine was expanded with a nave and covered walkway. Today the small chapel, where the hearts of Bavarian kings are stored in silver urns, is one of many points of interest in this town of 12,000 near the Austrian border.

The late Gothic, twin-towered Stiftskirche (Collegiate Church) and the Neo-Baroque St. Anna’s Basilica are two of many churches within walking distance of Chapel Square, where Pope Benedict XVI celebrated Mass in 2006. Across from the Chapel of Grace is the New Ecclesiastical Treasury and Pilgrimage Museum, which is named for the pope, who has been familiar with Altötting since childhood. Another draw is the Crucifixion Panorama, a 360-degree painting (dating from 1903) that depicts events that transpired on Good Friday in Jerusalem. From May to October, candlelight processions take place from St. Anna’s to the square.

The 154-mile Benedict Trail, a cycling trail that connects sites associated with the early life of Pope Benedict XVI (Joseph Ratzinger), starts in Altötting at the Pope’s Linden Tree, planted in 1980 by Pope John Paul II. The circular route traces the footsteps of Ratzinger, visiting his birthplace in Marktl am Inn and homes in Tittmoning, Aschau am Inn and Traunstein. Touching the holiday regions of Chiemgau, Chiemsee, Inn-Salzach and Rosenheimer Land, the circuit includes many churches, abbeys and farm villages.

Pope Benedict’s birth house in Marktl am Inn is marked by a commemorative plaque. Dating back to 1748, the building was formerly a customs house of the prince-electors. Benedict XVI was born there as the third child of Josef and Maria Ratzinger on April 16, 1927. (altoetting.de)