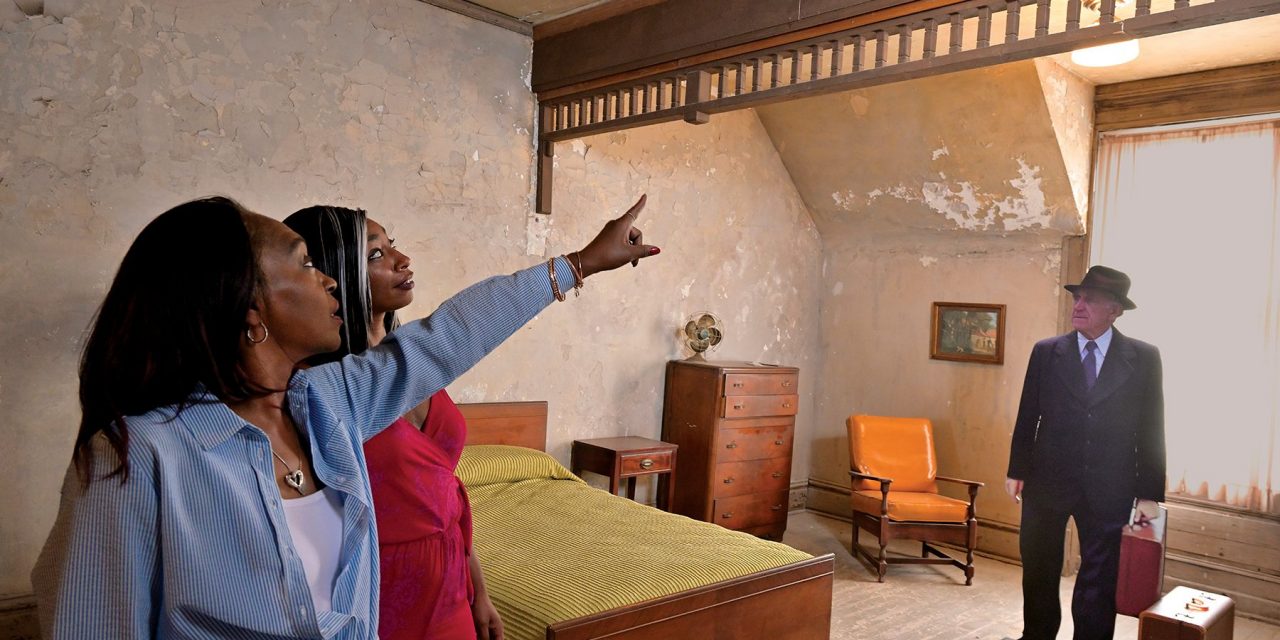 Including movie filming sites is a surefire way to add a touch of glamor to any tour itinerary. To boost tourism, many destinations play up their Tinseltown ties and promote attractions that have become places of pilgrimage for fans of the Silver Screen.

Hollywood studios have used Ohio buildings, townscapes and farmlands to depict various locations in America. Here are four movies that left their mark on the state:

Often listed as one of the best movies of all time, The Shawshank Redemption was filmed largely in Ohio, though the story, based on a Stephen King novella, takes place in Maine. Destination Mansfield – Richland County in 2008 created The Shawshank Trail, a self-guided driving tour that visits 15 filming sites.

The imposing, castle-like Ohio State Reformatory in Mansfield, completed in 1896 and closed the last day of 1990, is Shawshank State Prison in the 1994 movie that features Tim Robbins (Andy Dufresne) and Morgan Freeman (Ellis “Red” Redding) as prisoners who form a bond and plan an escape. Tours of the old prison showcase Andy’s escape tunnel, his cell, the parole board room, warden’s office and solitary confinement “hole.” The Shawshank Museum displays props, set pieces and costumes from the Oscar-nominated film. 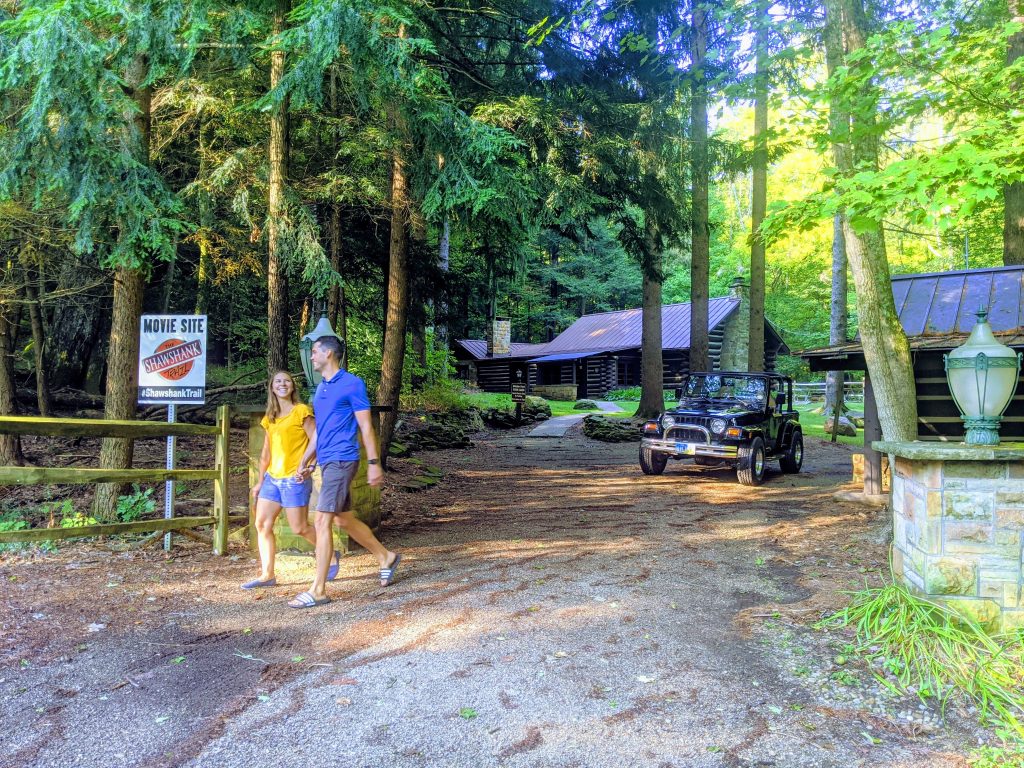 Often listed as one of the best movies of all time, The Shawshank Redemption was filmed largely in Ohio.

On Main Street in downtown Mansfield, a window in Mansfield Antiques Gallery was the pawn shop window where Red spotted the compass that would lead him to the iconic oak tree. The exterior of the Bissman Building on Main stood in as both the Portland Daily Bugle and Brewer Hotel (living quarters for James Whitmore’s character, Brooks, after his release from prison).

In Upper Sandusky, 45 minutes west of Mansfield, the Shawshank Woodshop, a functional woodworking shop open to visitors by appointment, is where the movie’s inmates worked and has the original equipment they used. Also in Upper Sandusky, you can enter the courtroom of the Wyandot County Courthouse, the scene of Andy’s conviction early in the movie.

Pugh Cabin, on the grounds of Malabar Farm State Park in Lucas, is where Andy saw his wife cheating on him; it appears in opening scenes. The farm, once the home of Pulitzer Prize-winning author and conservationist Louis Bromfield, was the location of the 1945 wedding of movie stars Humphrey Bogart and Lauren Bacall. Visitors can tour the French Provincial-style mansion, walk through the petting barn and gardens, and pick up some Malabar maple syrup. In Ashland, visitors can pose by the vault of the movie’s Maine National Bank in a former bank building that now is home of the Crosby Advisory Group.

Besides following the Shawshank Trail, groups in Mansfield can visit BibleWalk, which features more than 100 life-sized dioramas and the state’s only Christian dinner theater; Kingwood Center Gardens, with landscaped gardens, greenhouses and woodland trails; and the Ohio Bird Sanctuary, a haven for injured and orphaned raptors and other native birds.

The cast and crew of Harper Valley P.T.A. spent a week on location in Lebanon in the fall of 1977. A group tour favorite midway between Cincinnati and Dayton, the historic seat of Warren County abounds with specialty shops, antiques stores and old-time charm.

Inspired by the 1968 hit country song “Harper Valley P.T.A.,” written by Tom T. Hall and sung by Jeannie C Riley, the 1978 comedy stars Barbara Eden as Stella Johnson, a carefree single mother who dresses too sexy and acts too loose for the tastes of other parents. When her 14-year-old daughter is threatened with expulsion from school, she takes revenge by pulling a series of humiliating pranks on P.T.A. members.

The movie begins and ends with aerial shots of Lebanon, which serves as fictional Harper Valley, Ohio. The Village Ice Cream Parlor on South Broadway, one of the filming locations, touts its part in the movie with a framed tribute at the entryway. (The eatery also appeared in Milk Money, a 1994 film starring Melanie Griffith and Ed Harris.) Another storefront served as Alice’s Beauty Shop. A local farm, private home (Stella’s house) and school (Harper Valley High School), among other Lebanon locations, also made it into Hollywood immortality. Harper Valley P.T.A. opened in six theaters in Lebanon, Cincinnati and Dayton.

The Golden Lamb Restaurant and Hotel, the centerpiece of downtown Lebanon, has been offering food and lodging for travelers since 1803. It is Ohio’s longest continually operating business and has been in the same brick building since 1815. Dishing up farm-to-table fare, the Golden Lamb (which sources many items from its 350-acre farm) is known for its fried chicken, roasted turkey breast and hickory-smoked prime rib. 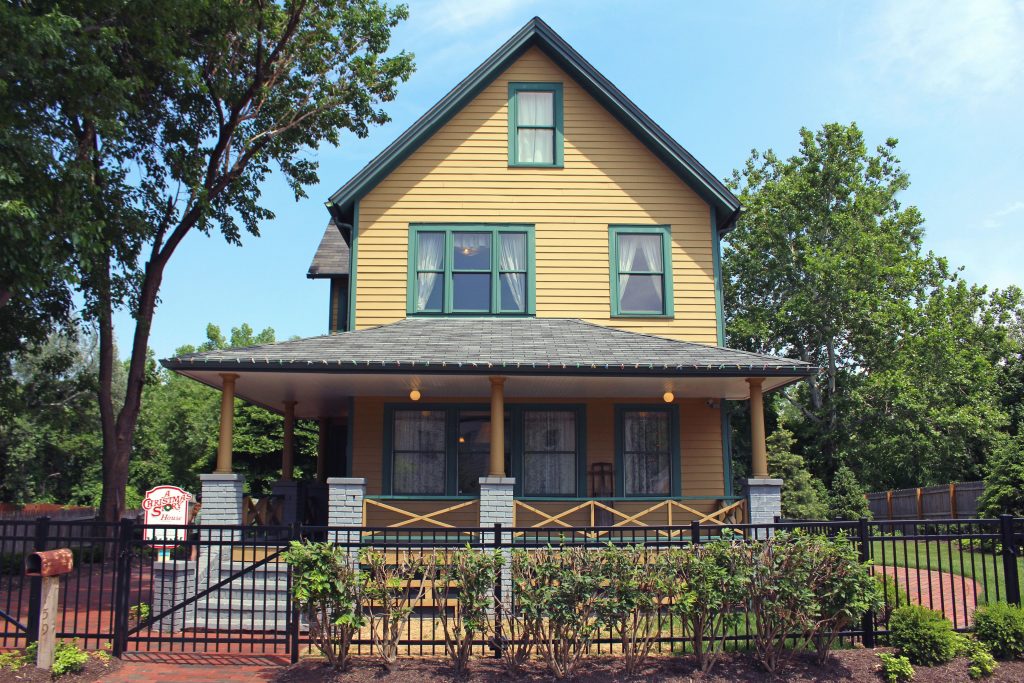 Fans of A Christmas Story enjoy touring the house that served as the home of Ralphie Parker and his family.

Fans of A Christmas Story enjoy touring the house that served as the home of Ralphie Parker and his family. Several scenes in the 1983 holiday classic show the two-story 1895 Victorian at 3159 West 11th Street in Cleveland’s Tremont neighborhood, just south of downtown. The exterior has been restored to its original movie splendor, and the interior (not used in the movie) replicates the Parkers’ home, complete with 1940s furnishings. (Because it was too cold to snow during filming, snow had to be trucked in from local ski resorts, and water was sprayed to form ice on trees by house.)

The story, about a 9-year-old boy (actor Peter Billingsley) who tries to convince his parents (Darren McGavin and Melinda Dillon) that a Red Ryder BB-gun is the perfect Christmas gift, actually takes place in a northwest Indiana steel town (Hammond), not Cleveland. In a famous line, he is warned by his mother and Santa, “You’ll shoot your eye out.”

Visitors to A Christmas Story House & Museum are free to touch and play with everything in the house. They can hold a replica Red Ryder BB-gun, put on a pink bunny suit (as worn by Ralphie), take a selfie at the Christmas tree, hide under the sink as little brother Randy did and admire the iconic leg lamp (a tacky lamp with fishnet stocking and high heel, an award won by the father).

Two homes across the street comprise the museum and gift shop, where guests can peruse original movie props, memorabilia and behind-the-scenes photos. On display are the leg lamp, a Red Ryder air rifle and costumes used in the film. Souvenirs for sale include pink bunny suits and leg lamps.

The interior of the former Higbee’s department store, once the anchor of downtown’s Public Square, appeared in the movie as the place where Ralphie saw the BB gun in the window and kids waited in line to see Santa Claus. The Christmas parade scene was filmed outside of the store. The 12-story Higbee’s building in the Terminal Tower complex is now a casino. Bird’s-eye views of the city are available from the tower’s 42nd-floor observation deck.

Also popular with groups touring Cleveland are the lakefront’s Rock and Roll Hall of Fame and Great Lakes Science Center, which offers hundreds of interactive exhibits and a giant-screen theater. Narrated, two-hour cruises on the 1,000-passenger Goodtime III ply Lake Erie and the Cuyahoga River. Cultural magnets in University Circle include the Cleveland Museum of Art, Cleveland Museum of Natural History and Cleveland Botanical Garden. Downtown’s Playhouse Square, a collection of five historic theaters, is the largest performing arts center outside of New York.

Downtown Cincinnati locations include the 1921 Dixie Terminal Building, with its elaborate marble-paneled arcade. Posing as Cincinnati Trust, it’s where Charlie charms the desk clerk into divulging the whereabouts of the $3 million trust fund set up by his late father. Another scene shows the brothers driving across the Ohio River on the nearby John A. Roebling Suspension Bridge, a prototype of the same architect’s Brooklyn Bridge. Filming sites just across the river in northern Kentucky included Greater Cincinnati International Airport, Pompilio’s Restaurant in Newport, St. Anne Convent in Melbourne and Evergreen Cemetery in Southgate. The convent stood in for Wallbrook, the institution where Raymond lived.

Other movies filmed in Ohio include the 1993 Richard Dreyfuss film Lost in Yonkers, with scenes shot in Wilmington and Ripley; and Traffic, a 2000 thriller about the illegal drug trade starring Michael Douglas and Catherine Zeta Jones. The latter features the Ohio Statehouse and Ohio Judicial Center in Columbus and Cincinnati’s Over-The-Rhine district. Columbus’ Merion Village neighborhood and John Glenn Columbus International Airport appear in Aftermath, a 2017 drama starring Arnold Schwarzenegger. The 2015 John Travolta movie I Am Wrath also was filmed in (and is set in) Ohio’s capital city.