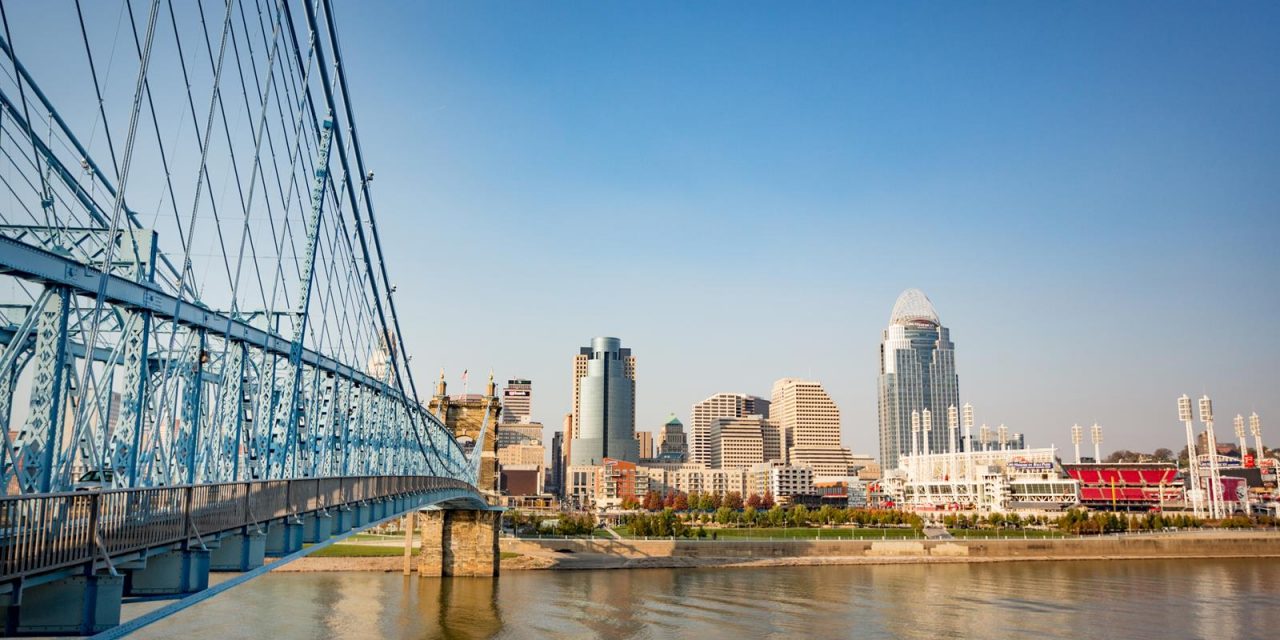 From baseball history to chili parlors, this metropolitan area in Southern Ohio and Northern Kentucky steps up to the plate.

Fresh from a trip to Cincinnati, I just had a chance to get reacquainted with this Ohio River city and found myself overwhelmed with all the things a group itinerary could include. There weren’t enough hours in the day to sample even a fraction of the attractions, tours, good eats and other experiences that await visitors. But I tried.

It’s hard to narrow down, but here are my Eight Great:

Built as a train station in 1933 and still an Amtrak hub, Union Terminal is a magnificent Art Deco landmark that houses four museums and an Omnimax Theater. Recently renovated to the tune of $228 million, it also hosts traveling exhibitions like Egypt: The Time of Pharaohs, which runs through August 18, 2019.

The latest addition to this Cincinnati cultural magnet is the Nancy & David Wolf Holocaust & Humanity Center, which opened in January. Video interviews with local survivors, activated by touch screens, recall heartbreaking scenes of violence, deportation, family separation, public humiliation, and life in Auschwitz and other concentration camps. Black-and-white film footage chronicles the rise of Nazism in Germany, Nuremburg Trials and other historical events. Artifacts include family photos, letters, official documents and Nazi paraphernalia. A multimedia presentation challenges viewers to ponder what they would do to help people at risk, relating it to current human rights issues. 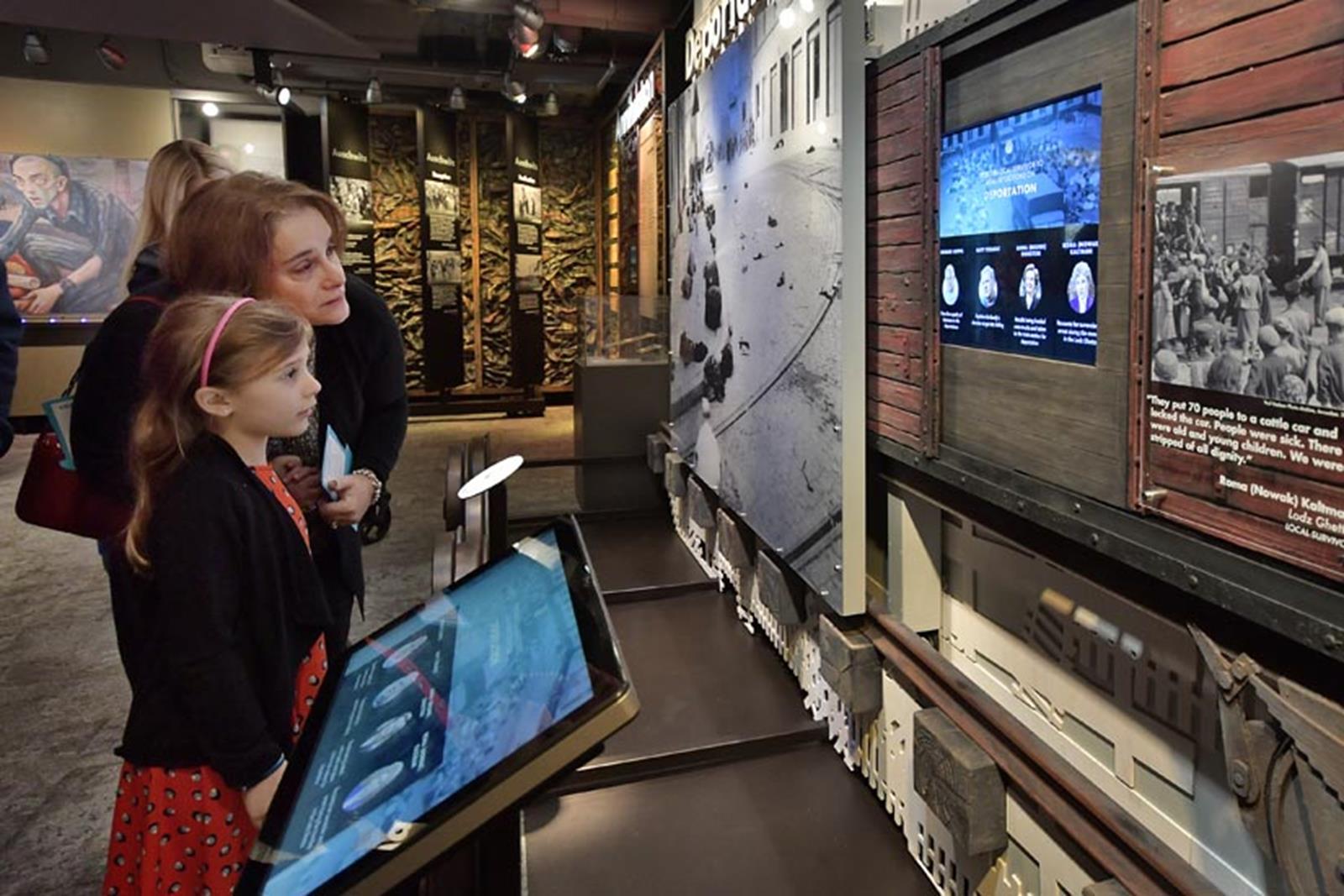 Many Holocaust survivors looking for a new life in America arrived at Union Terminal, making this the only Holocaust museum with a historic connection to the site. The deportation exhibit has a railroad motif and even a window that opens onto the train tracks of today. 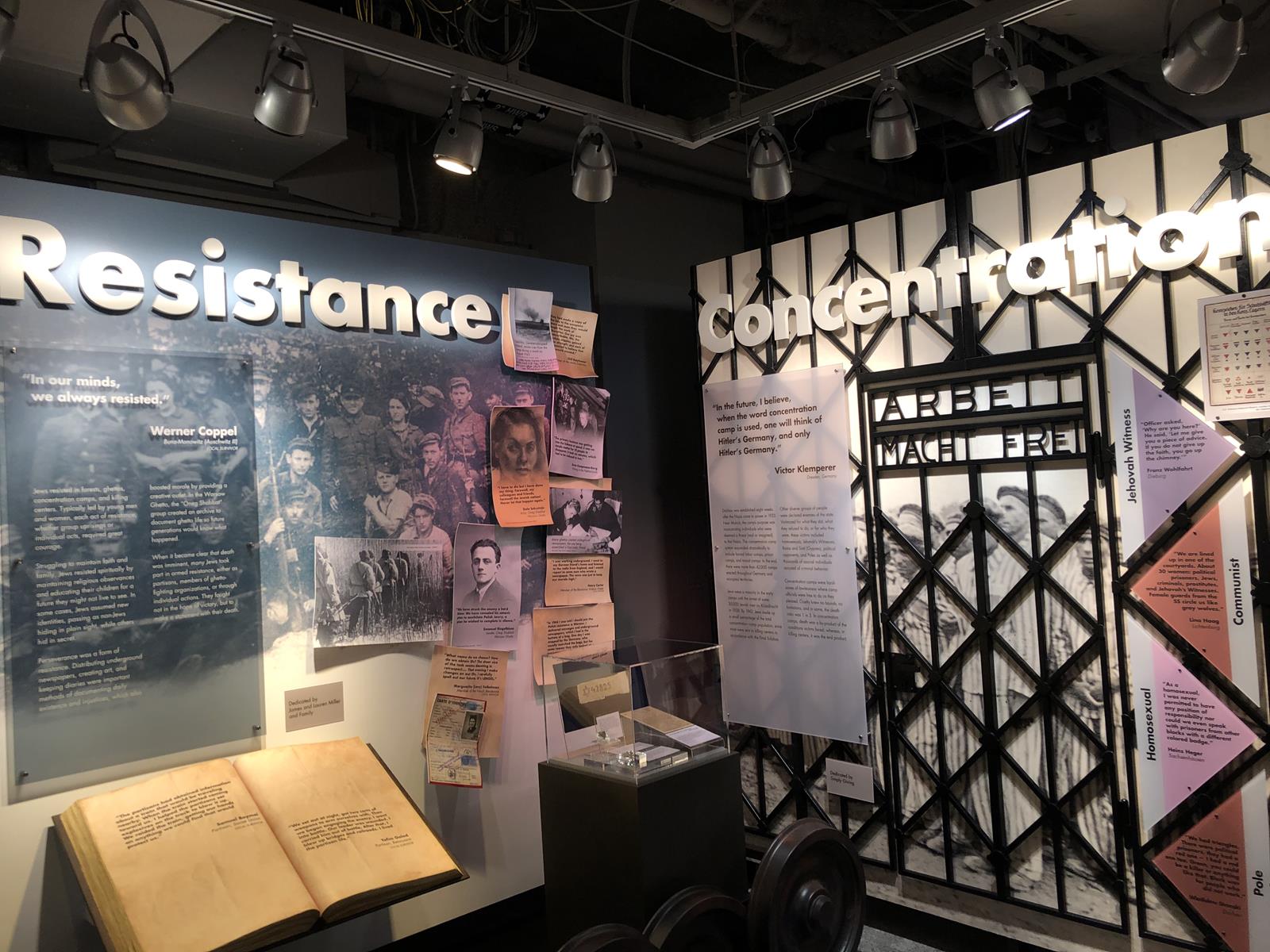 Other museums at Union Terminal include the Cincinnati History Museum, Duke Energy Children’s Museum and Museum of Natural History and Science. The latter houses Dinosaur Hall, Science Interactive Gallery and The Cave, a replica limestone cave with an underground stream.

Union Terminal’s Grand Rotunda, decorated with mosaic murals depicting the history of the United States and region, boasts the largest half-dome in the Western Hemisphere.

This cavernous space with 28-foot ceilings is illuminated by a staggering collection of commercial signs. The nation’s largest public museum dedicated to signs covers a half-century of sign history, design and technology, beginning with the early 1900s. 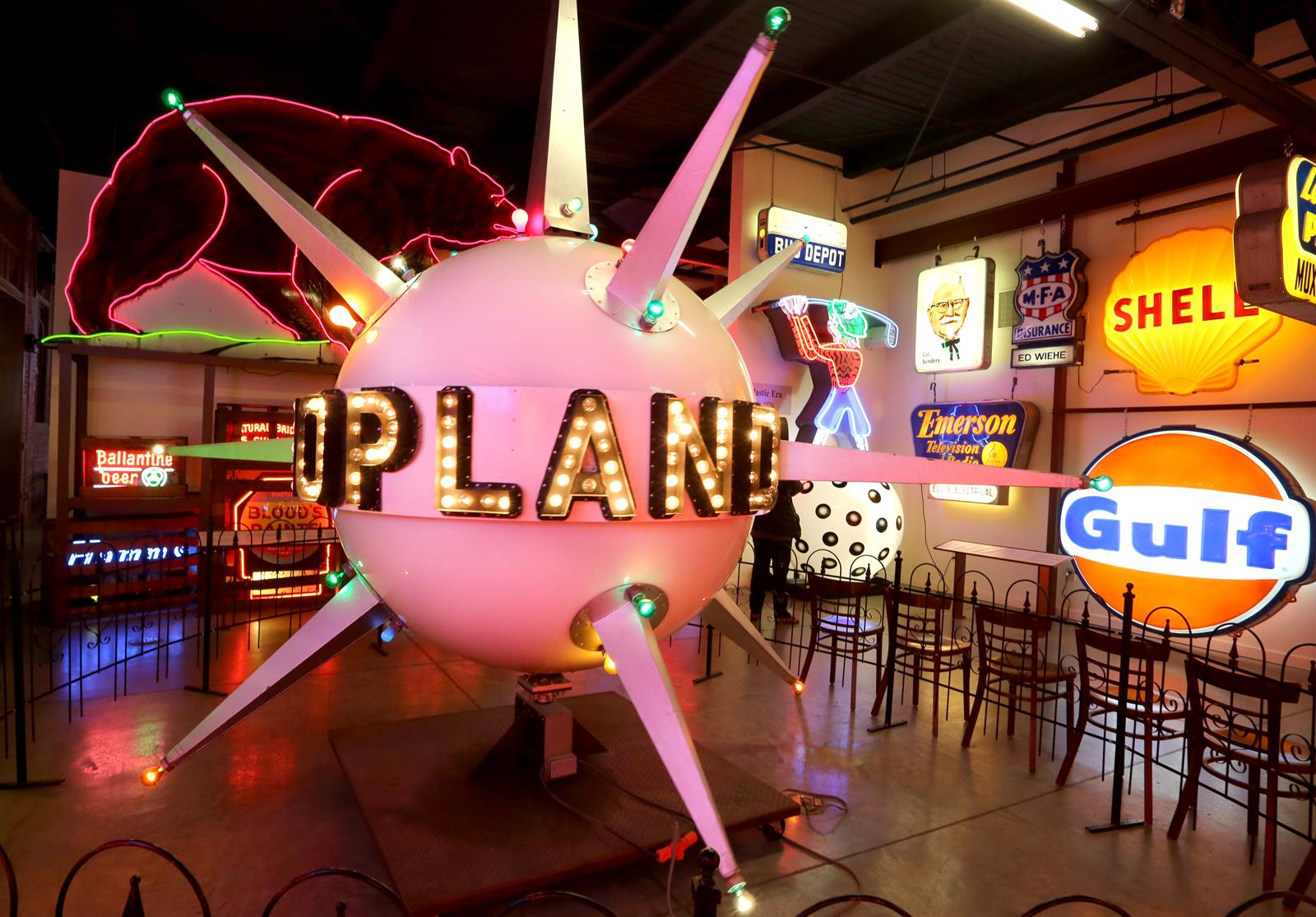 Visitors will want to pose in front of the huge neon structures that once advertised roadside icons like McDonald’s (when Mister Speedee hawked 15-cent burgers), Holiday Inn and Howard Johnson’s. Also popular with picture-takers is the statue of a uniformed, hamburger-carrying lad from a Frisch’s Big Boy restaurant. Other signs were salvaged from pizza parlors, gas stations, and mom-and-pop diners and motels. Signs from a barber shop, hardware store, drug store, auto parts shop and other businesses are displayed in a nostalgic Main Street setting, a walk down memory lane. 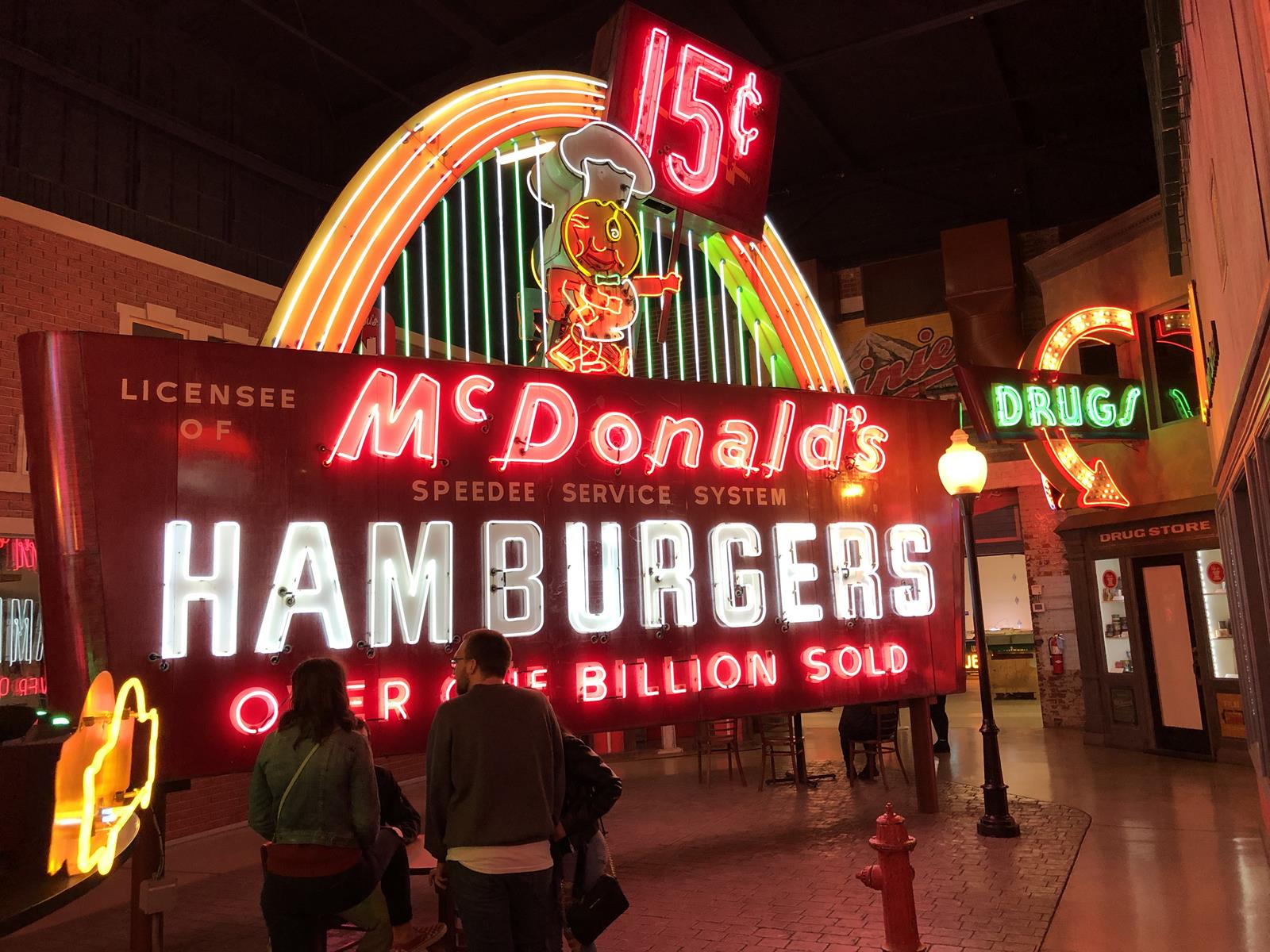 Visitors enjoy 360-degree panoramas from the open-air observation deck atop this 49-story skyscraper. Completed in 1931, it was used as a model for New York’s Empire State Building. The tower, located downtown on Fifth Street, is the second-tallest building in Cincinnati (after the Great American Tower) and highest elevated building in the city. Providing a good orientation to the city, the deck affords views of the riverfront baseball and football stadiums, towns of Newport and Covington on the Kentucky shore, and neighborhoods like Over-the-Rhine and Mount Adams. 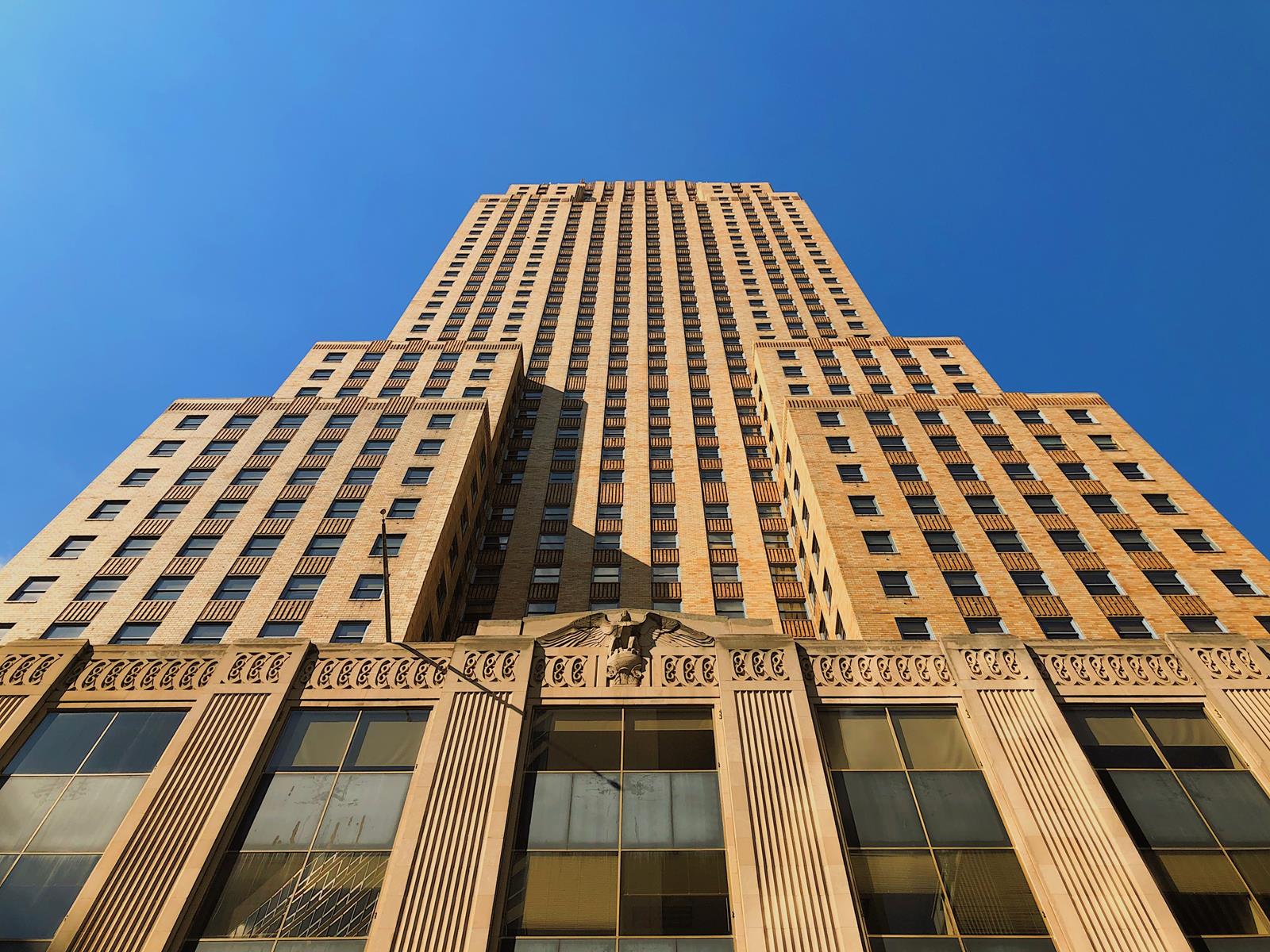 Carew Tower and companion Netherland Plaza Hotel, which also opened in 1931, were designed as a city within a city, featuring office space, a hotel, department stores and small shops. Now a Hilton, the 561-room Netherland Plaza has been restored to its 1930s grandeur. With rare Brazilian rosewood paneling, Italian marble, metal ornamentation and German nickel-silver light fixtures, the hotel is one of the world’s finest examples of French Art Deco architecture. Visitors popping in for a quick look will want to check out the lobby and soaring murals in the adjacent, high-ceilinged Palm Court, an elegant setting for a restaurant and bar.

Photo plaques in the lobby and Palm Court relate stories about former guests like Bing Crosby and Elvis Presley. Recent movies filmed at the hotel include Carol (2015) and Gotti (2018) starring John Travolta.

Rather than being served in a bowl by itself, Cincinnati’s distinctive chili is a chocolately-looking meat sauce poured over a plate of spaghetti and smothered in a pile of shredded cheddar. Developed in 1922 by two Macedonian immigrant brothers who founded Empress Chili, it’s thinner than standard chili and typically flavored with cinnamon, cloves and allspice, among other spices. 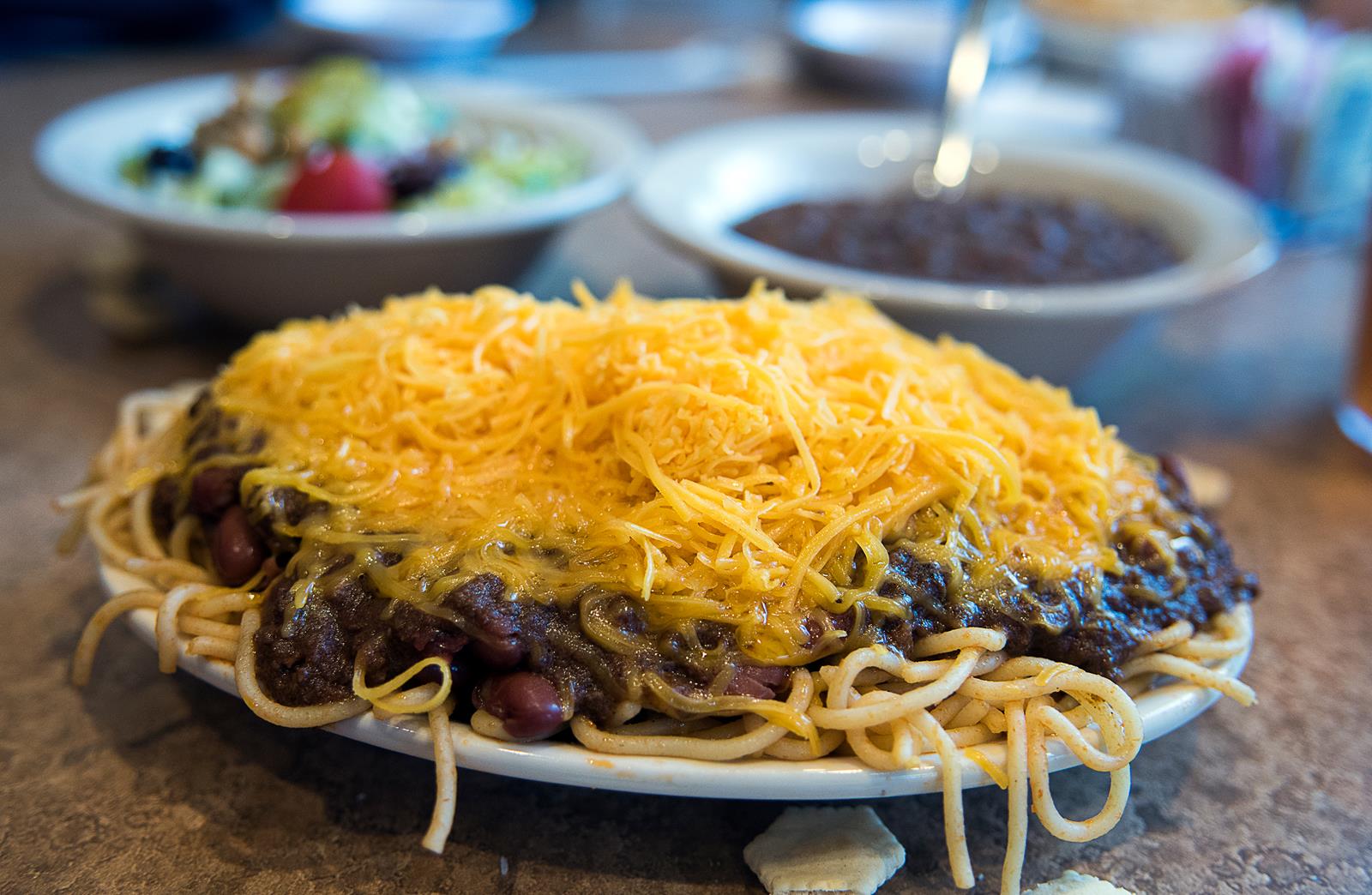 With just the chili and cheese toppings, it’s called a three-way. Add kidney beans or diced onions and you’re ordering a four-way. With both beans and onions, it’s five-way. Ask for a “coney” and you get a hot dog covered in chili and cheese. 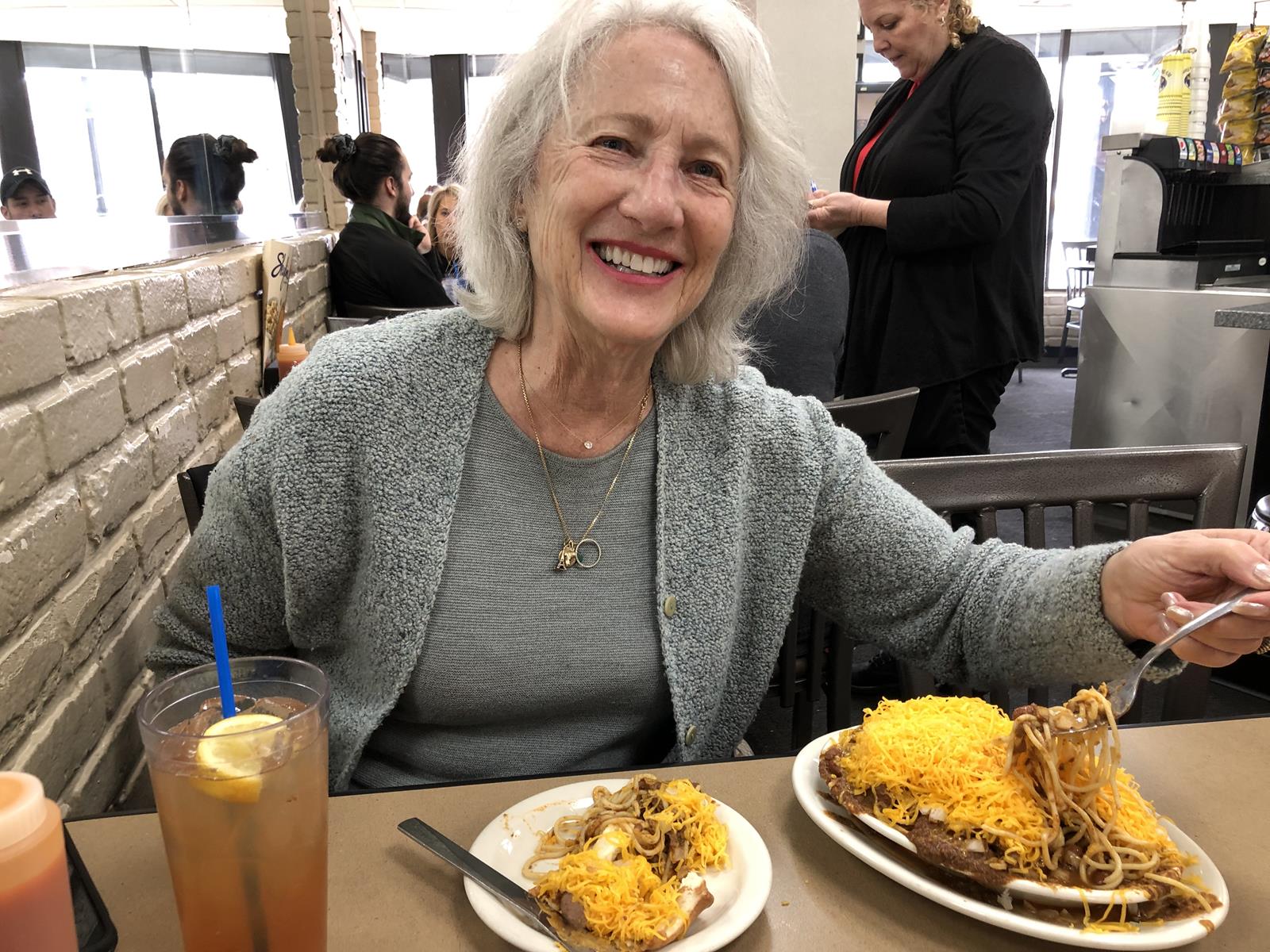 The Cincinnati region has more than 250 chili restaurants, with Skyline and Gold Star the most ubiquitous. Skyline patrons complement their chili with cracker bombs—oyster crackers with hot sauce.

Dating from 1852, the iron-frame building of Ohio’s oldest public market is a culinary temple for foodies. More than 50 full-time businesses, many operated by generations of the same family, are housed in the hall and surrounding storefront buildings. 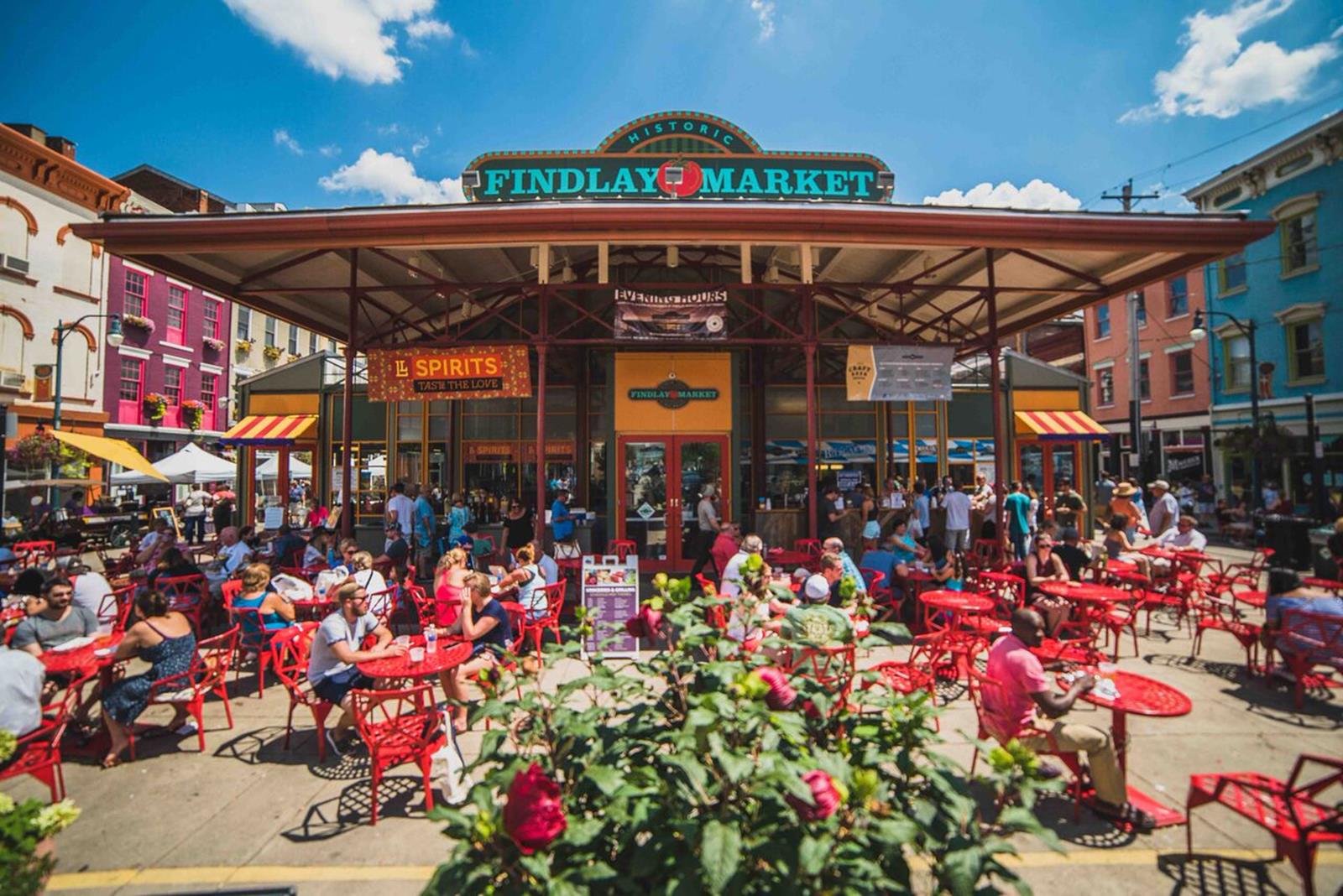 Market tours led by Barb Cooper of Cincinnati Food Tours include plenty of sampling. At Taste of Belgium, your group might try a freshly made, Liege-style waffle portion dotted with pearl-size sugar cubes. Dean’s Mediterranean Imports serves up made-from-scratch hummus. The bean-to-bar Maverick Chocolate Company makes everything in-house, using cacao from places as diverse as Tanzania, Belize and Hawaii. The sample at Eckerlin’s butcher shop, a sixth-generation business, is goetta, an only-in-Cincinnati food of German-American origins that consists of pork shoulder and beef chuck mixed with steel-cut oats, salt, pepper, onion, beef fat and a few secret ingredients. Fried slices from a loaf of goetta are served in local restaurants as a breakfast meat choice. 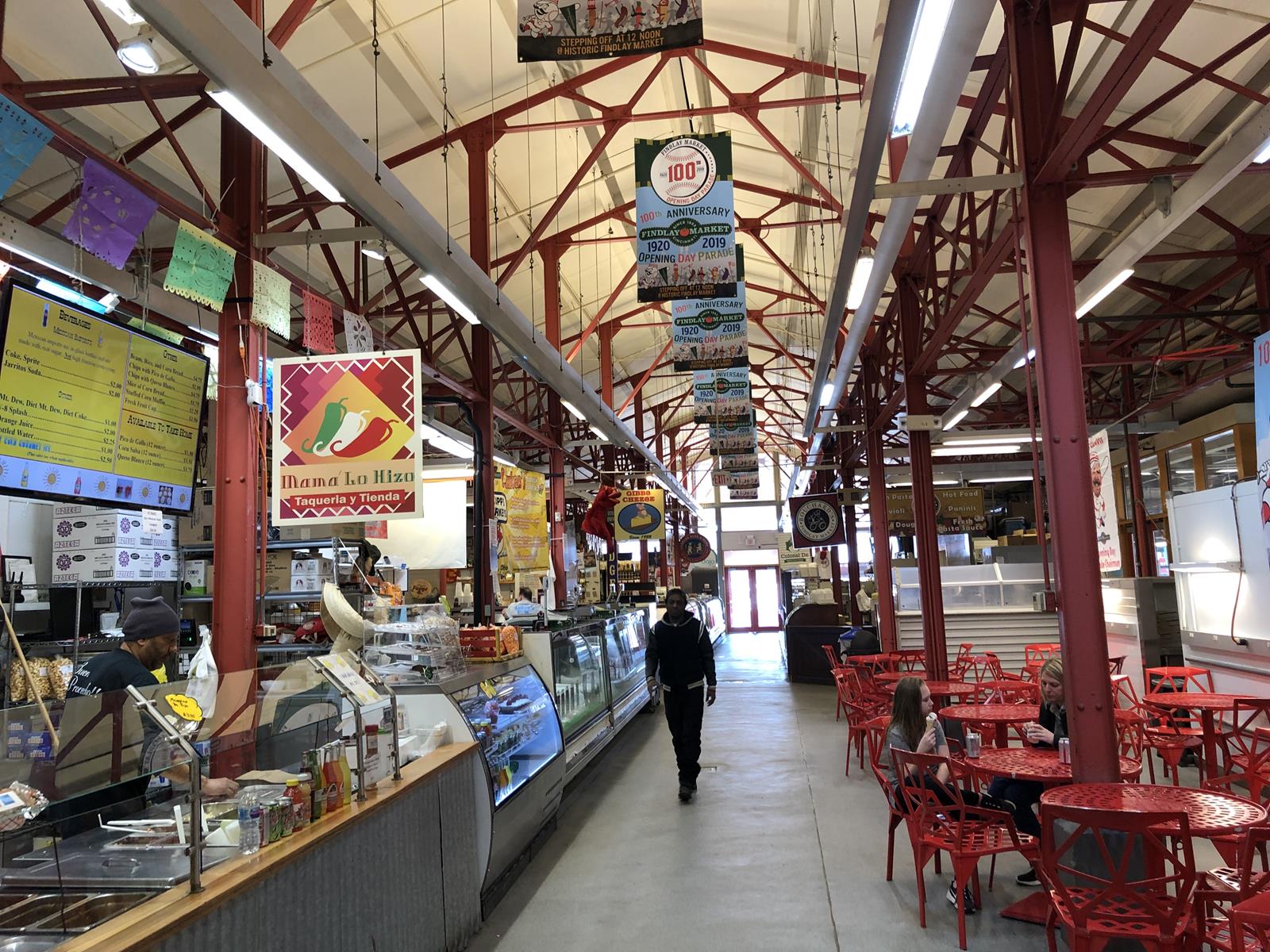 Findlay Market (closed Mondays) has outdoor tables as well as indoor seating next to the food stalls. The outdoor Farmer’s Market at The Shed operates from April to November.

The recently renovated market is a prime attraction in Over-the-Rhine (OTR), a downtown neighborhood once the enclave of German immigrants. OTR today is the country’s biggest historic district, with 943 buildings on the National Register of Historic Places and the largest collection of intact 19th century Italianate architecture anywhere. A proliferation of restaurants, bars and specialty shops has sparked a neighborhood revival the past 12 years.

This baseball shrine next to Great American Ball Park reopened in March after an offseason renovation that coincides with the team’s 150th anniversary. The Reds were founded in 1869 as the Cincinnati Red Stockings, baseball’s first openly all-professional team, with 10 paid players. At 16,000 square feet the museum is the largest baseball team hall of fame. 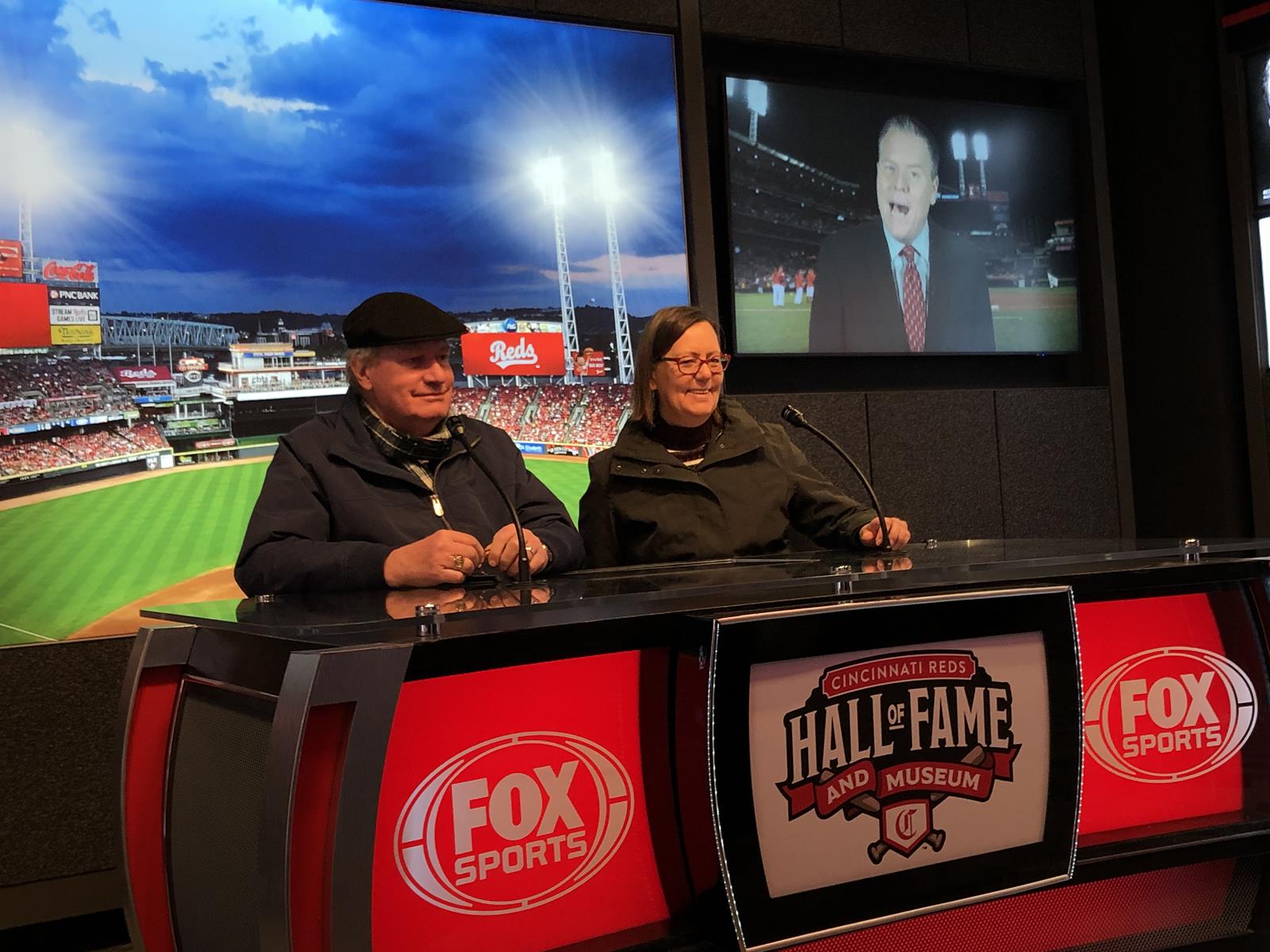 A theater shows short videos on general team history and those focused on all-time greats like Pete Rose, the Major Leagues’ all-time hit leader. The museum has a glass-enclosed ball wall with each of the 4,256 balls representing one of Rose’s hits. In the exhibit galleries are life-size statues of Hall of Famers like Johnny Bench and Barry Larkin, plus cases filled with memorabilia, from gloves, bats and balls to uniforms, shoes and game programs. Also on display are the team’s World Series trophies (from 1919, 1940, 1975, 1976 and 1990). 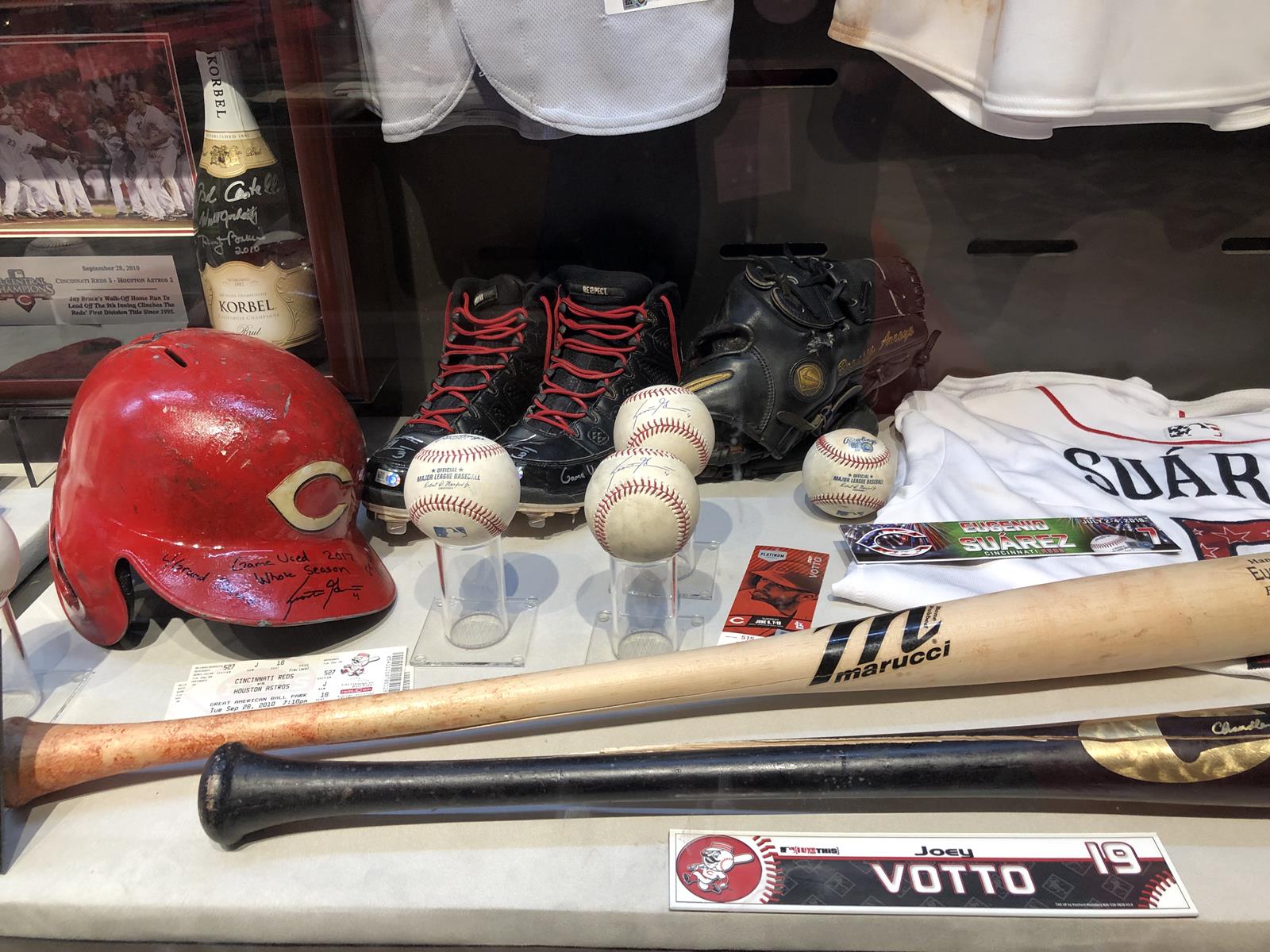 Touch screen videos add an interactive element, offering insights into team history and tips from the pros on fielding, pitching and hitting. Favorite stations include the broadcast booth, where guests can provide play-by-play for an important moment from the past, and a computer that designs a personalized, electronic baseball card (with your name and face) that can be emailed. Another computer provides access to archives with thousands of baseball cards going back decades.

A favorite pastime in downtown Cincinnati is strolling along the Ohio River promenades or just sitting on a bench—or even in a porch-style swing—while watching the barge and boat traffic on this waterway that separates Ohio and Kentucky. Smale Riverfront Park is a pleasant greenspace between the Cincinnati Bengals’ Paul Brown Stadium and Great American Ball Park. A little farther down are other parks for chilling out on Cincinnati’s front yard. 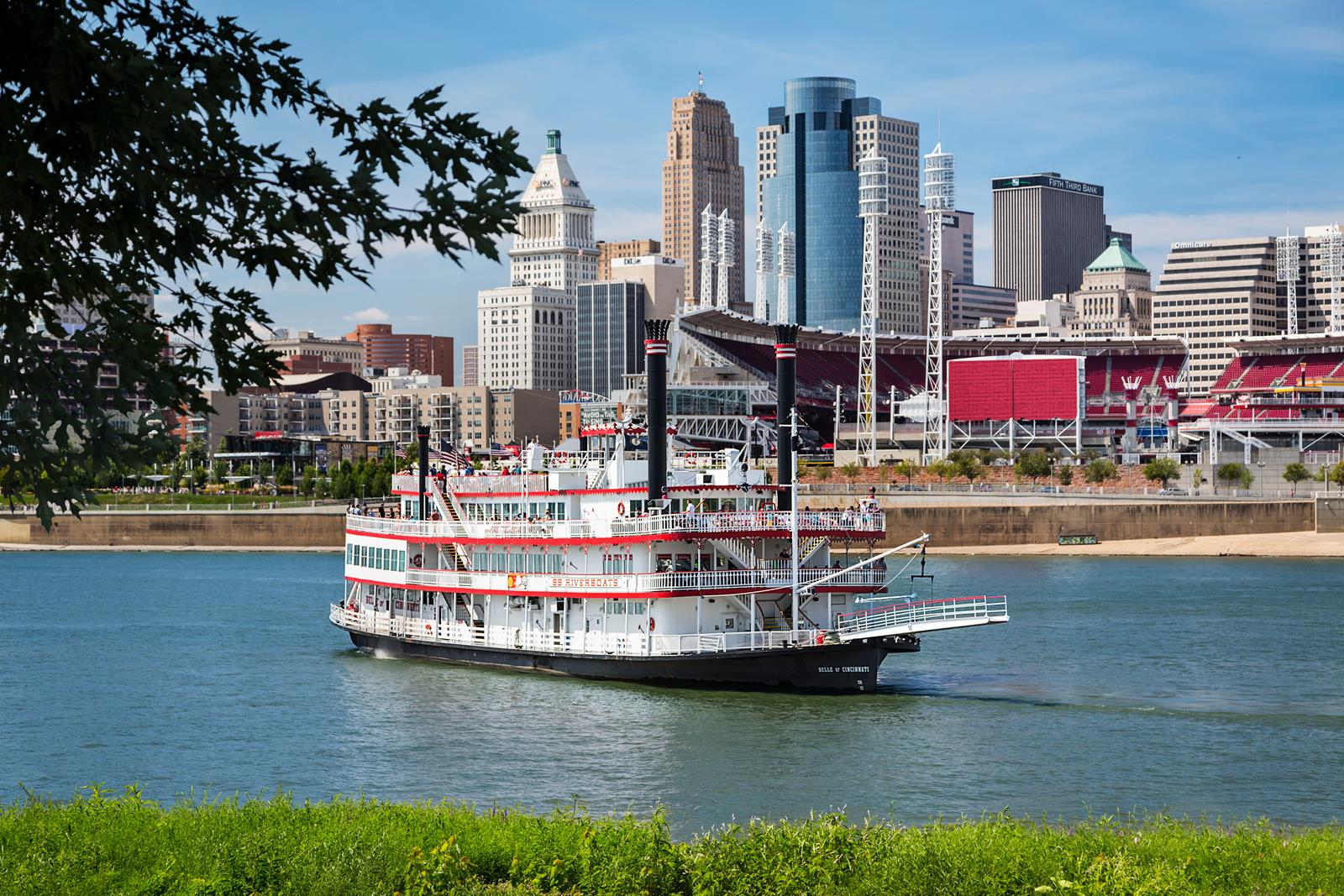 Four of the river’s multiple bridges have pedestrian walkways, so you can walk from one state to another, taking in views of the Cincinnati skyline and Kentucky shore. Most famous is the 1867 John A. Roebling Suspension Bridge, named for the civil engineer who designed it and later the Brooklyn Bridge. 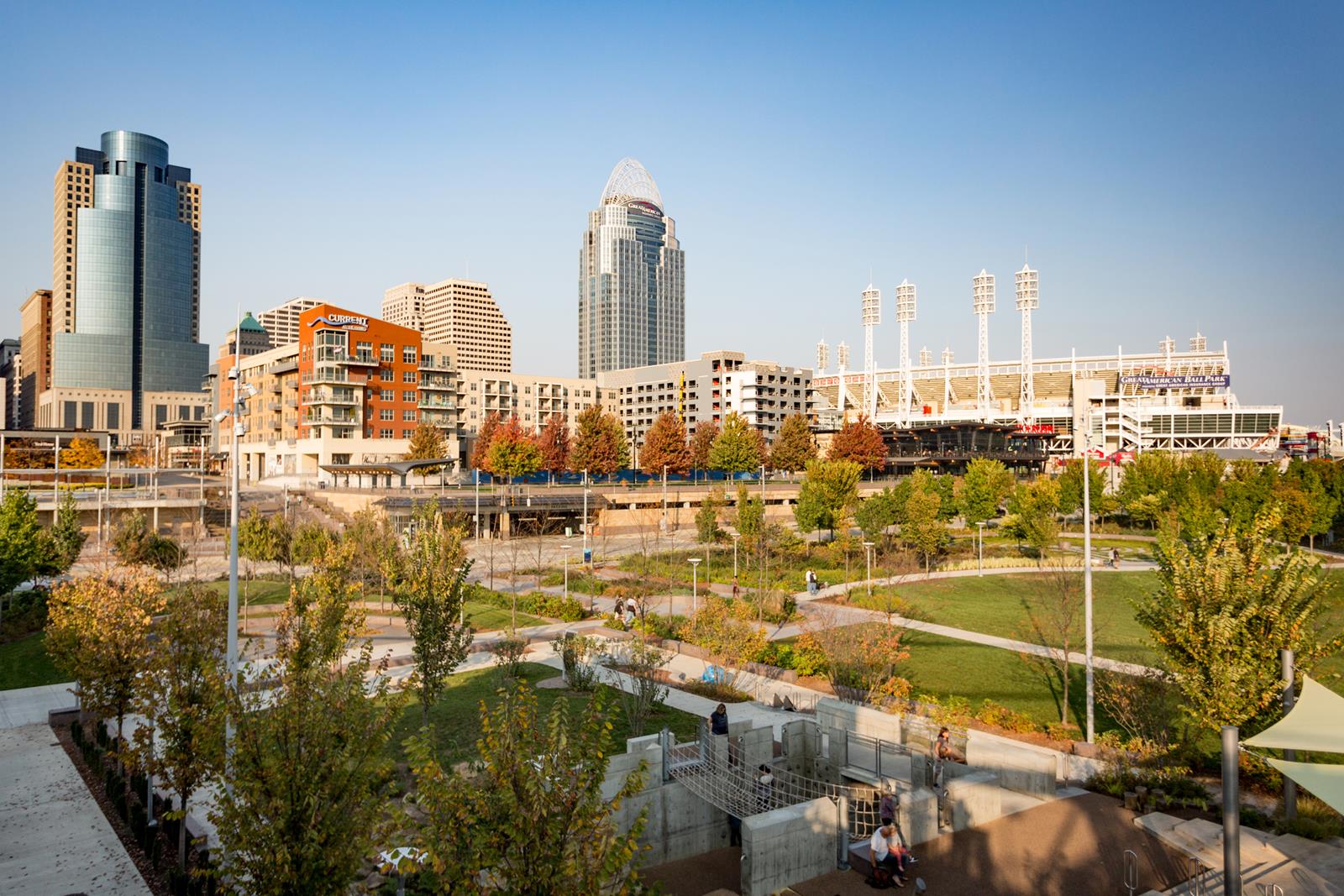 BB Riverboats offers another way to experience the mighty river. Dining and sightseeing cruises are available on the 1,000-passenger Belle of Cincinnati and 400-passenger River Queen, paddlewheelers that evoke the romance of a bygone era.

Two-state vacations are always fun, and everyone likes a two-for-one deal, so crossing the Ohio River—by foot, car or trolley—from Cincinnati to the Northern Kentucky towns of Covington and Newport is an over-the-border adventure. 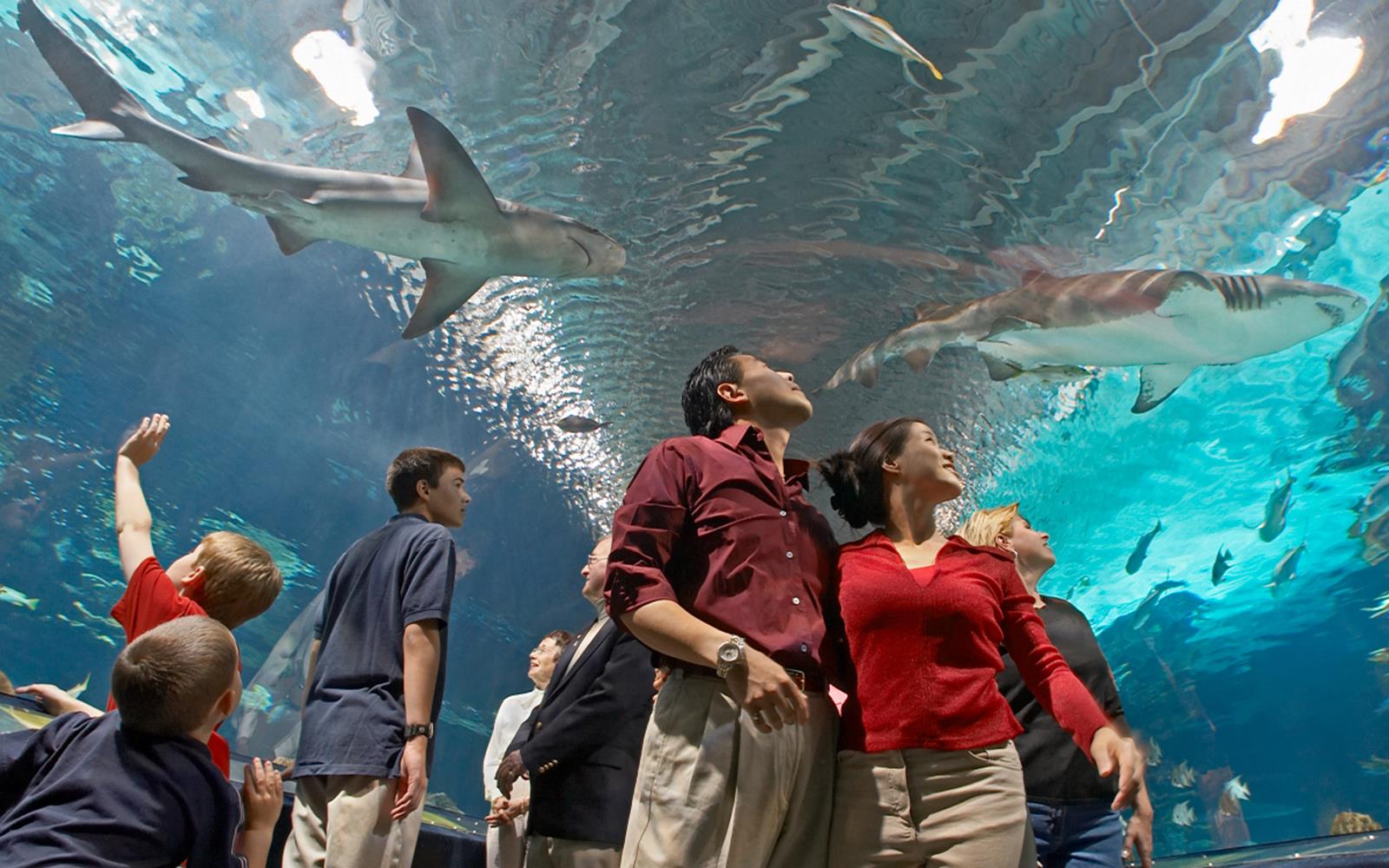 Newport is the departure point for BB Riverboats, and not far from the docks lies Newport on the Levee, a shopping/dining/entertainment complex that includes the state-of-the-art Newport Aquarium. It’s all a walk away from Cincinnati via the pedestrians-only Purple People Bridge. 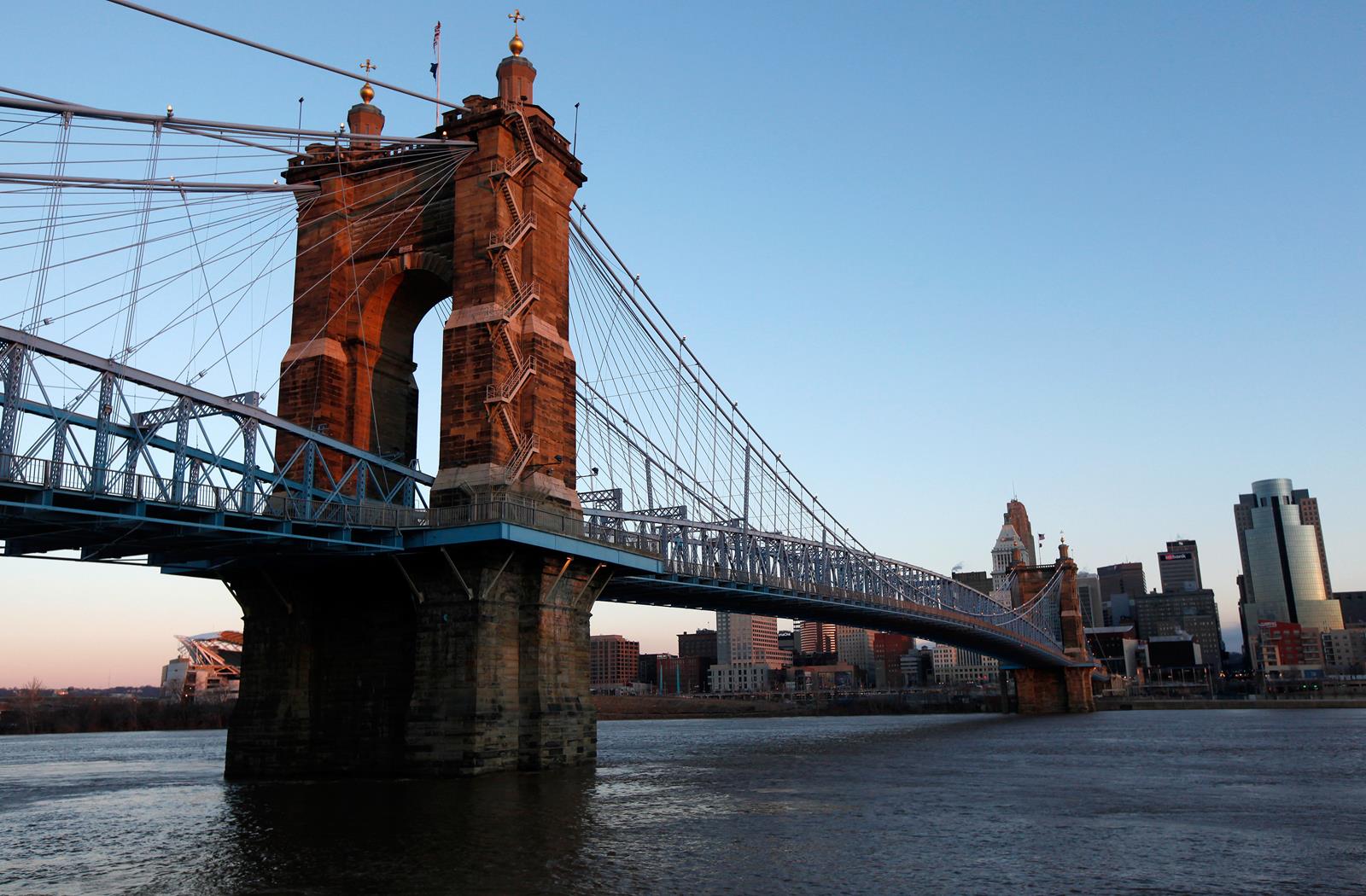 Covington, just over the Roebling Bridge from downtown Cincinnati, is home to Main Strasse Village, a restored 19th century German neighborhood with eateries, bars and shops in renovated buildings. It boasts some of the area’s best restaurants, including Otto’s, Commonwealth Bistro, Bouquet Restaurant and Wine Bar, and Frida 602. Also on Main Street is Old Kentucky Bourbon Bar, a participating venue in The B-Line, a new experience centered around a trail that includes four craft bourbon distilleries in Kentucky.