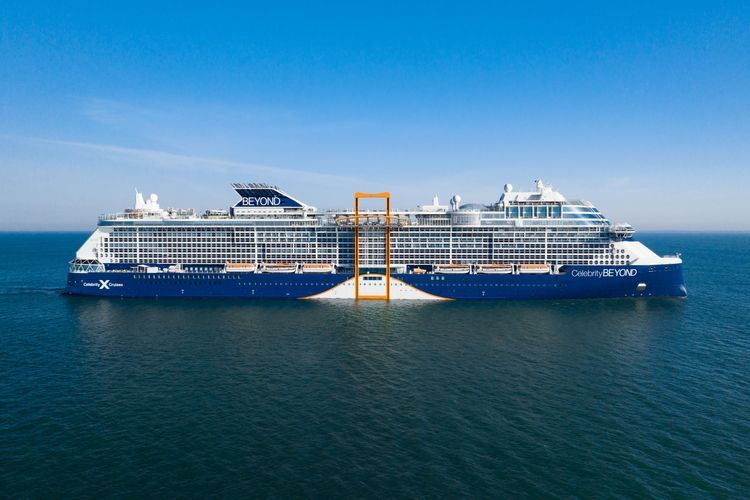 While exploring the balmy ports of call will appeal to winter-weary Americans, many passengers will be just as excited to spend their days roaming the 17 decks of the cruise ship itself, a 3,260-guest luxury resort that represents a leap beyond in the line’s Edge series introduced in late 2018. 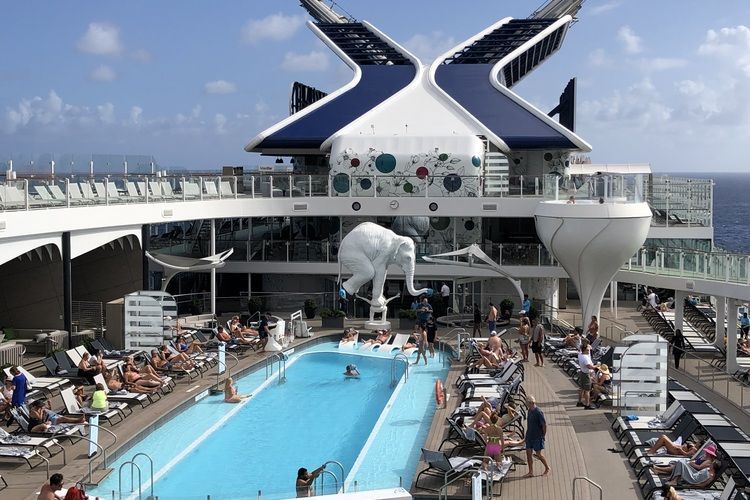 Adding to the buzz swirling around the cruise line’s Celebrity Beyond is her captain. A celebrity in her own right, Captain Kate McCue is the only American woman who helms a cruise ship like Celebrity Beyond, and she has four million followers on social media. Affectionately known as “Captain Kate,” the attractive, slim ’n’ trim commander was quite visible on my recent cruise from Fort Lauderdale. We encountered Captain Kate taking part in a bartending show as she stood on the bar in high heels, balancing cups, and at a ribbon-cutting for the onboard Bulgari jewelry store. 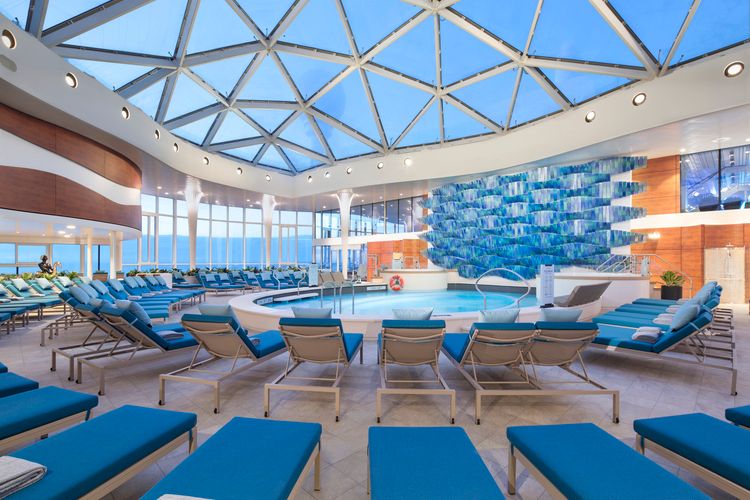 The Solarium is the cruise ship’s indoor pool for persons 16 and older. (Celebrity Cruises Photo)

The cruise ship had just completed her Mediterranean season and, after her North American debut in New York City in late October, was starting her inaugural-season sailings from Florida. Godmother Simone Biles, a world champion gymnast, lent some star power to the official naming ceremony at Port Everglades.

Luxury Cruise Ship: The Celebrity Beyond

The Celebrity Beyond has a sleeker profile than the other Edge-class luxury cruise ships, boasting more bars and restaurants, 179 more staterooms, and just more public space. The Resort Deck, the site of the main pool, measures 20 percent larger. Dominated on one end by a whimsical white sculpture of an elephant balancing on a man’s back, it sports a 25-yard lap pool with in-pool loungers and eight private cabanas. A two-level jogging track winds around the deck (five laps equals one mile). Two martini glass-shaped hot tubs offer lofty views.

For guests 16 and older, the nearby Solarium features a covered pool, two hot tubs, and an art wall representing the colors and movements of the ocean. The adjacent Spa Cafe & Juice Bar focuses on healthy cuisine. 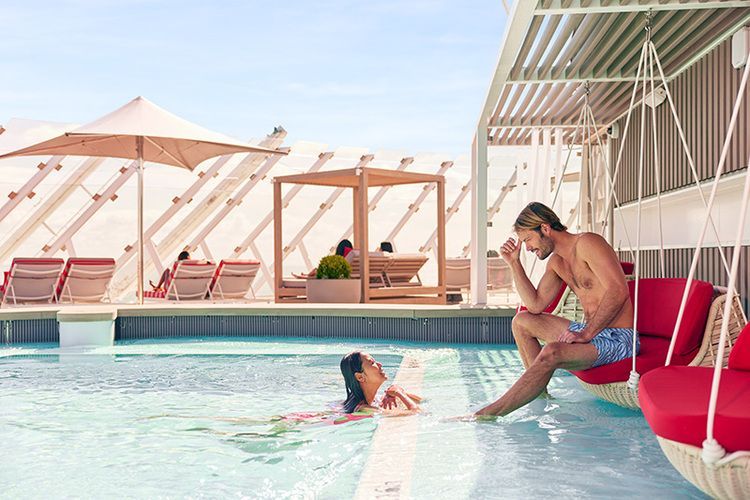 The Retreat, a private sanctuary reserved for suite guests of this cruise ship, has been taken to another level with an expanded two-story sundeck, 40 percent larger than on the other Edge-class ships. A resort-within-a resort, The Retreat has its own pool, two hot tubs, a lounge with food and drink, and Luminae, a restaurant sporting an elegant new design and floor-to-ceiling windows at the front of the cruise ship. Another exclusive eatery, Blu, is for guests staying in AquaClass staterooms, which offer a special spa, fitness, and other wellness privileges and amenities.

Unlike some other cruise lines, Celebrity’s Edge-class cruise ships have four smaller main dining rooms instead of two gigantic ones. For breakfast, lunch, and dinner, guests can choose between Cosmopolitan, Normandie, Tuscan, and Cyprus. Their menus feature selections common to all four rooms plus items exclusive to the particular restaurant. The Mediterranean-influenced fare at Cyprus, for example, pays homage to the line’s Greek heritage, while Tuscan offers Italian-inspired cuisine. 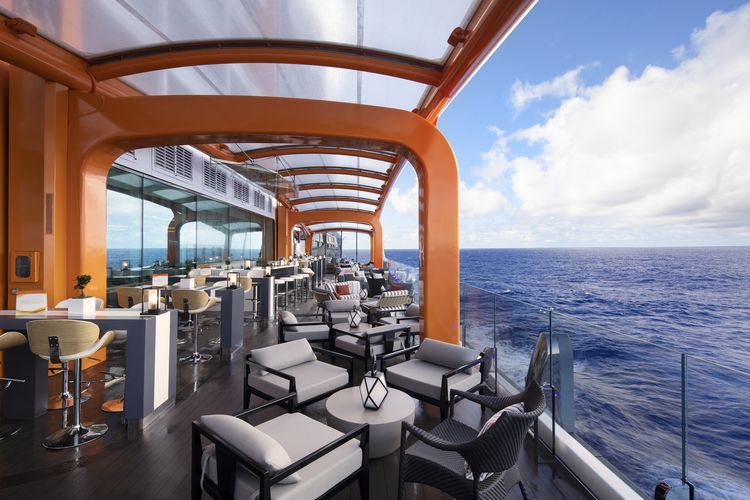 In total, the Celebrity Beyond cruise ship offers 32 distinct food and beverage options. One of them is the Magic Carpet, a bright orange, tubular steel platform that clings to her starboard side and can move up and down between the waterline and the top. Fixed in place, this iconic wow factor identifies Edge-class ships from miles away and serves as an open-air lounge or restaurant and as an embarkation station for tenders when perched at Deck 2.

The Oceanview Cafe, a favorite of mine, features more seating and additional service islands. The all-day buffet restaurant also has a new bar in the aft section and more space for alfresco seating. Open for breakfast, lunch, afternoon snacks, dinner, and late-night bites, the light-filled Oceanview affords sweeping views of the sea through expanses of glass that soar two stories high. Best of all, it provides a culinary trip around the world. You can feast on lamb moussaka, Italian meatballs, or Asian noodles. The Indian Foods station might offer butter chicken or chicken biryani. Cheese lovers flock to the Fromagerie, which features everything from French Brie and Spanish Manchego to Dutch Gouda and Italian Gorgonzola. The Carvery serves up juicy slices of beef and ham, and the Fish Market offers a wide selection of seafood. There are made-to-order omelets, poached eggs, pastas, and stir fry. And don’t forget the pizzeria, which is open until 2 a.m., and Scoop, the ice cream parlor. 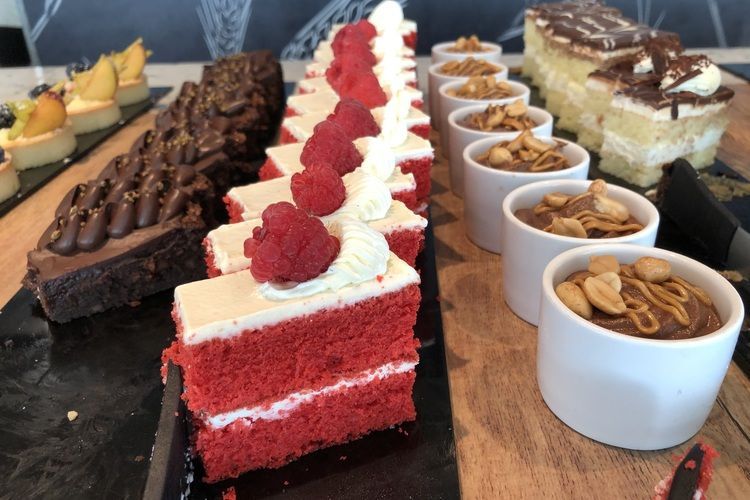 Bakery items on this cruise ship are among the many temptations at the Oceanview Cafe, a buffet lover’s dream.  (Randy Mink Photo)

Many breakfast-goers, myself included, couldn’t resist taking a picture of honey dripping from the honeycomb into a bowl for spooning onto breads and rolls. Photoworthy at lunchtime were the pasta station’s hollowed-out cheese wheels filled with risotto, spaghetti carbonara, and other Italian favorites. 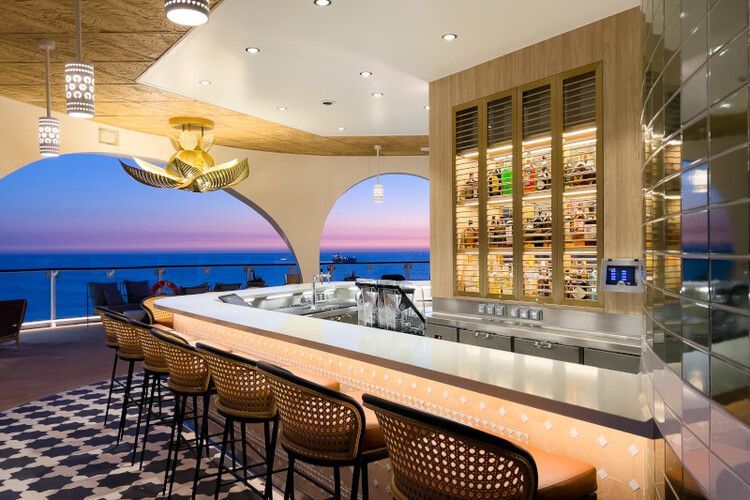 The Rooftop Garden, an Edge-class ship signature feature, invites travelers to slow down and daydream in an enchanting environment lush with plants and trees. Nestled in one corner is the Rooftop Garden Grill, which specializes in burgers, brisket, and BBQ. A jumbo screen shows sports events and movies. On my cruise ship, people were watching Top Gun: Maverick in the afternoon and football at night. The multi-terrace Sunset Bar, located behind the Rooftop Garden Grill, has been expanded 180 percent, redefining the aft; it extends to the deck below to accommodate the Oceanview Cafe’s alfresco area.

Eden, a nature-inspired cafe/lounge/restaurant that spans three levels at the aft, is by far the edgiest space on the Celebrity Beyond cruise ship (and other Edge-class ships). Festooned with live vegetation and populated by evocative performance artists, it’s whimsical, otherworldly, and a bit mysterious. With 7,000 square feet of glass, moreover, Eden boasts the most outward-facing glass of any room at sea. Its extra-charge restaurant ($60 a person) wins raves and is angling to gain a Michelin star. 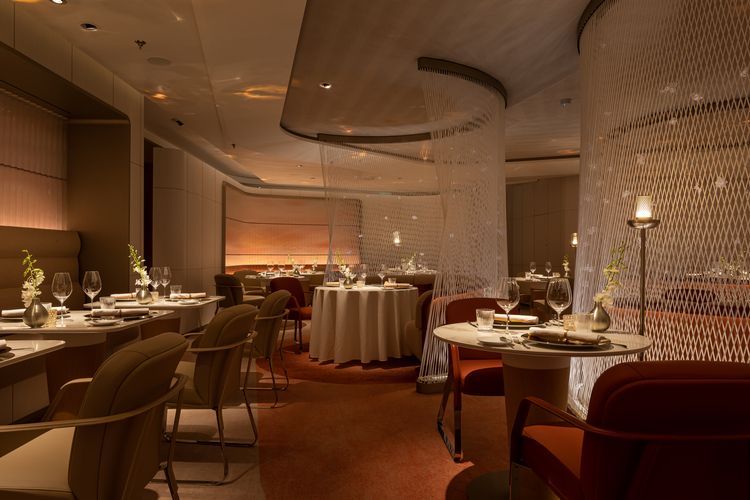 On Deck 5 of this luxury cruise ship, another specialty restaurant mirrors the vision of a chef whose New York City restaurant has earned a Michelin star. Located on Deck 5 and facing the dramatic, three-story Grand Plaza atrium and its circular Martini Bar featuring live entertainment, the intimate Le Voyage by Chef Daniel Boulud (priced from $75 a person) delivers the cruise line’s most refined dining experience.

Fine Cut Steakhouse, yet another candidate for a special night out, has been expanded to the edge of the cruise ship to allow floor-to-ceiling ocean views, and there are views of the Grand Plaza on the other. Menu items include prime rib of beef and lemon poached lobster.

French-flavored Le Grand Bistro, also looking out on the Grand Plaza, is a charming spot for quiche, crepes, pastries, and sandwiches like the classic croque monsieur (priced per item). By night the place transforms into Le Petit Chef, offering an unforgettable experience, the only one like it at sea. In a digital animation show that magically turns your tabletop into a swirl of colors, a spunky little cartoon character appears at each guest’s plate and prepares each course before the actual dish is served. The technology took 10 years to develop. We enjoyed short rib bourguignon as our main course.

The technologically mind-blowing spectacles in the main show lounge, simply called The Theatre, take at-sea entertainment to new heights. One night we caught the production “Stage Door,” which featured beloved songs from the biggest Broadway and West End musicals. Singers were accompanied by a symphony orchestra recorded at the London Palladium; its musicians appeared larger than life in a video backdrop that wrapped behind the circular stage. Equally engaging was “Arte,” a dazzling show that combined dance, acrobatics, and visual effects with artwork by masters like Van Gogh, Dali, Dutch masters, and Renaissance greats. 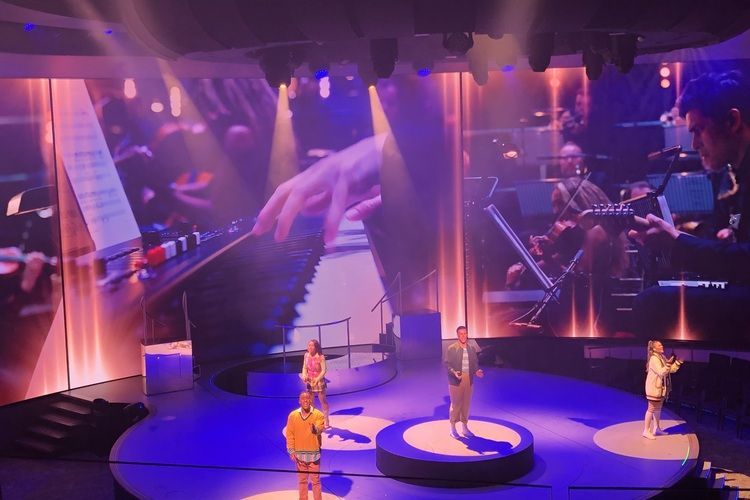 On the first morning of the inaugural cruise, we gathered in The Theatre for “A Conversation with Celebrity,” which featured a seated Captain Kate and her boss, Lisa Lutoff-Perlo, president and CEO of Celebrity Cruises. They talked about cruise line industry trends, traded stories, and took questions from the audience.

Captain Kate said she had dreamed about working on a cruise ship ever since taking a Bahamas cruise on the Atlantic, part of Premier Cruise Line’s Big Red Boat fleet, with her family at age 12. “I said then that I wanted to be a cruise director, and my father said, ‘You can do anything you want to do, including driving the ship.’” McCue graduated from the California State University Maritime Academy in 2002 and worked for other cruise lines before coming to Celebrity.

Women, McCue said, now account for 32 percent of Celebrity Cruises’ bridge teams, up from a mere 2 percent when she started with the line in 2015 as captain of the Celebrity Summit at the age of 37. She later moved on to helm the Celebrity Equinox and, in 2019, became the commanding officer of the Celebrity Edge. 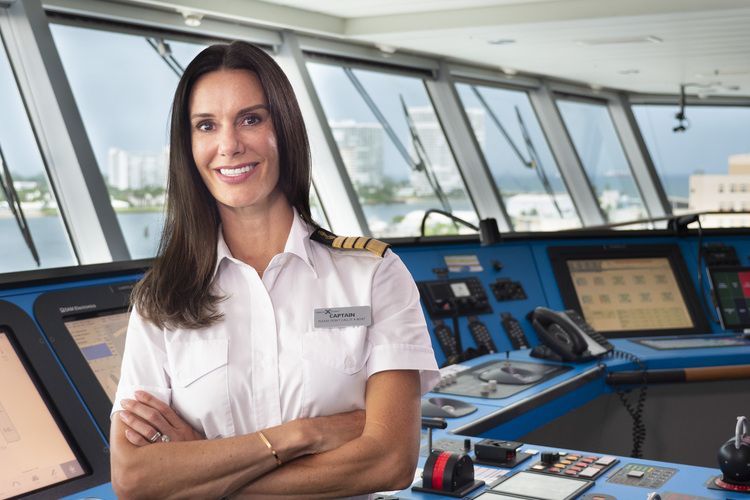 Lutoff-Perlo, named Celebrity’s CEO eight years ago, acknowledges that McCue has become a rock star in the cruising world and sometimes overshadows her, but she has made recruitment and promotion of women a chief priority. To emphasize that focus, the presentation showed a video from a special cruise in March 2020 when the Celebrity Edge sailed with an all-women bridge team (made up of 16 different nationalities and headed by Captain Kate) to celebrate International Women’s Day.

The boss got a big laugh when she told a story about strangers who ask, in casual conversation, what she does for a living. When Lutoff-Perlo tells them about her big-time position with Celebrity, they say, “Oh, you’re Captain Kate.”

Bright Future for the Cruise Line

Unlike cruise lines that got rid of older ships during the lockdowns, Celebrity Cruises, in introducing two new luxury ships, has actually seen a 27 percent increase in capacity since the outbreak, she said. The Celebrity fleet numbers 15. 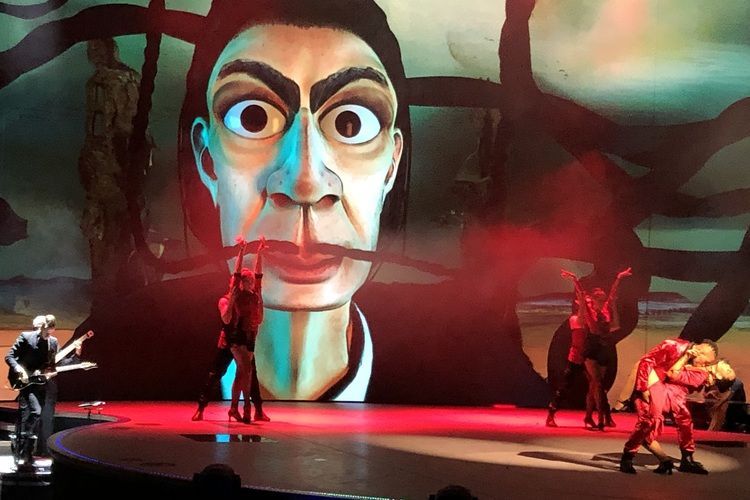 Praising Celebrity’s devoted crew members as the heart of the operation, Lutoff-Perlo said 98 percent of them wanted to come back as soon as sailings restarted. Celebrity Beyond’s crew represents 75 different countries. Their smiles, hard work, and attention to detail, I found, do indeed put a sunny face on the company, one that I would recommend for any luxury group cruise experience.

Once Celebrity Beyond’s Caribbean season concludes, she moves to the Mediterranean for a series of 9- to 14-night cruises beginning with a transatlantic sailing departing Fort Lauderdale on April 23, 2023.