Dupont Circle is the Preferred Place to Be in Washington D.C. 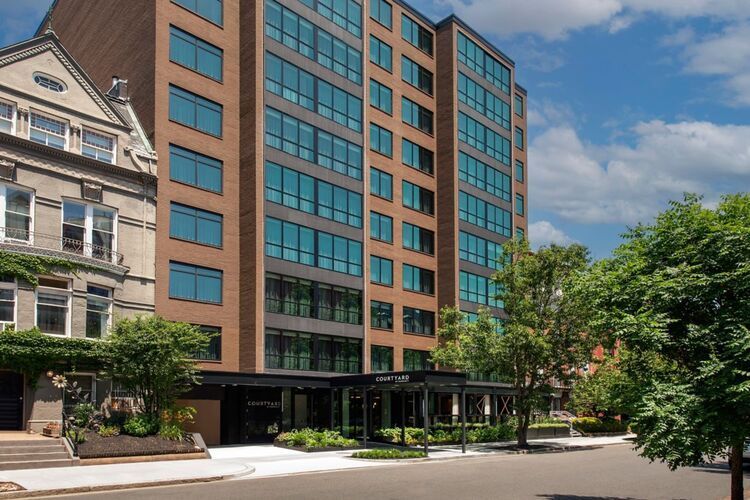 For guests of the new Dupont Circle hotel in Washington D.C., discoveries abound in and around this vibrant, cosmopolitan neighborhood

A sparkling new addition to a well-established residential street in Washington, D.C.’s lively Dupont Circle neighborhood made a perfect base of operations for my recent trip to the Nation’s Capital. The location—close to the commercial activity of Connecticut Avenue, Dupont Circle Metro station, and Embassy Row—could not have been better. The White House was just a 20-minute walk away from the hotel.

Marriott’s 10-story Courtyard Washington, D.C. Dupont Circle lies on a quiet, well-lit block of N Street NW, a street lined with turn-of-the-20th-century townhouses, some of them now law offices or restaurants. The floor-to-ceiling window in my ninth-floor room overlooked the venerable brick buildings and the dome of the historic Cathedral of St. Matthew the Apostle. On pleasant days, the windows of the lobby lounge open onto the sidewalk plantings, letting the charm of the Dupont Circle neighborhood waft in. 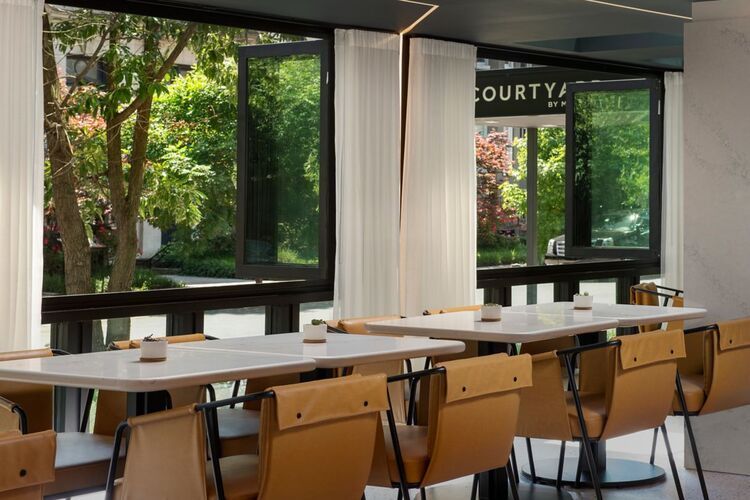 The Bistro is the social gathering spot in the lobby of the Courtyard Washington, D.C. Dupont Circle.

The 143-room Dupont Circle hotel, which opened in early 2022, is tucked between the Hotel Tabard Inn, a relic of the past where guests sip drinks before a fireplace in a cozy, wood-paneled bar, and the Embassy of the Federated States of Micronesia. The environs, in fact, abound with foreign governments’ embassies, many of them occupying opulent mansions dating back to the days when Dupont Circle was the preferred address of the elite. Today the eclectic mix of clubs, restaurants, offbeat shops, coffeehouses, and bookstores make the neighborhood diverse and a bit funky. The gay community contributes to the buzz.

The Courtyard hotel’s convivial lobby lounge, with its tables, booths, and five-stool bar, functions as a social gathering spot and workspace for laptop users, and it features a hotel restaurant called The Bistro. After a busy day of sightseeing, the room provides an inviting place to unwind over drinks and “Social Snacks” like chicken wings, meatballs, quesadillas, and margherita flatbread. The dinner menu includes salads and burgers. For breakfasts, we enjoyed avocado toast, yogurt with berries, oatmeal, and strawberry French toast. The Bistro serves Starbucks coffee.

For grab-and-go, the lobby has Crate, a place to buy beverages and packaged snacks. The hotel offers a microwave oven and computer for printing boarding passes. 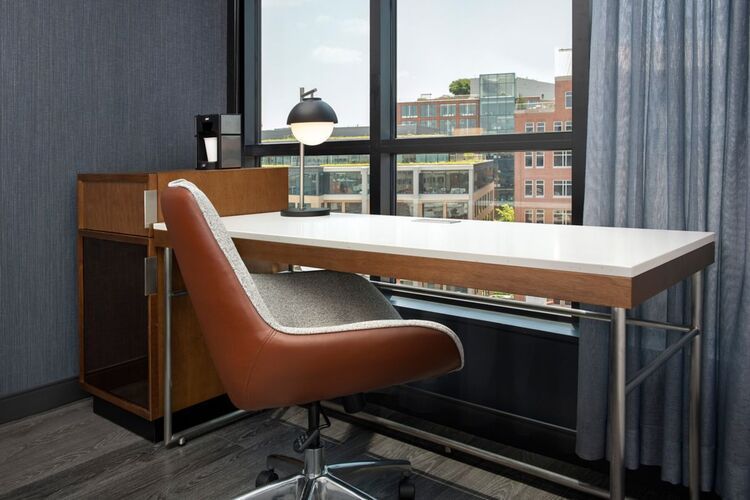 Guest rooms in this Dupont Circle hotel, accented with abstract art and decorated in shades of gray, feature a minimalist design, contemporary flair, and tech-savvy touches. I liked the long desk facing N Street and the oversized chair on rollers. But perhaps the best feature was the bright, white bathroom with a walk-in shower and huge circular mirror set in a ring of light. Other amenities at my Washington, D.C. hotel included free Wi-Fi, an abundance of outlets for devices, a refrigerator, a safe, coffeemaker, a floor lamp, and a 55” HDTV with streaming channels Hulu and Netflix. Everything, moreover, just had that fresh, clean, new-hotel feel. Missing, though, was a built-in closet, which I’ve noticed other new hotels skip in favor of a small wall rack with hangers. There’s a 24-hour fitness center in the basement of this popular Dupont Circle hotel.

Dupont Circle itself, a tree-shaded traffic island where Connecticut, New Hampshire, and Massachusetts avenues meet, is a great spot to sit on a bench and people-watch. In the middle rises a white marble fountain honoring Rear Admiral Samuel Francis du Pont, a Mexican-American War veteran and Civil War naval hero. Allegorical figures depicting the wind, sea, and stars surround its base. The fountain was sculpted by Daniel Chester French, famous for his iconic statue of Abraham Lincoln at the Lincoln Memorial, and designed by Henry Bacon, the memorial’s architect. Across from the green haven are an entrance to the Metro station and one of two Krispy Kreme Donut locations in D.C. 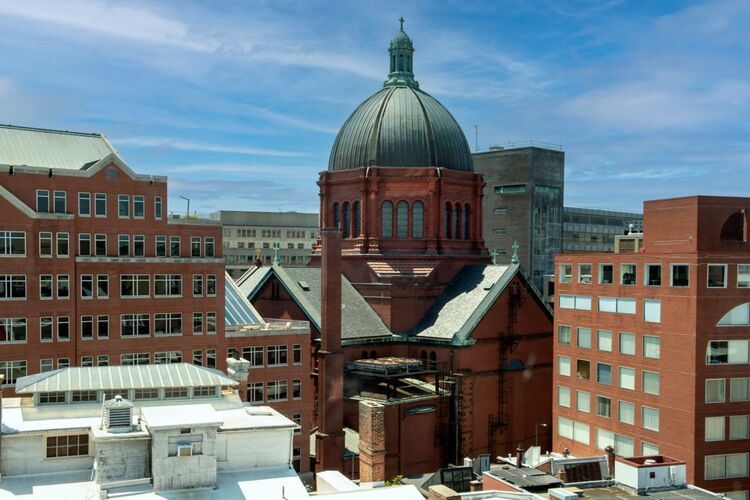 The dome of the Cathedral of St. Matthew the Apostle is visible from many rooms at the Courtyard Washington, D.C. Dupont Circle.

One night I walked over to St. Matthew’s and found the doors open, so I went in to admire the marble and mosaics, not knowing that President John F. Kennedy’s funeral was held there until I approached the altar and read this inscription on a marble plaque in the floor:

“Here rested the remains of President Kennedy at the requiem Mass November 25, 1963, before their removal to Arlington where they lie in expectation of a heavenly resurrection.”

For a peek into the diplomatic side of Washington, it’s fun to walk north along Massachusetts Avenue NW, known as Embassy Row, and see how many embassies and ambassador’s residences you can spot. Marked by national flags and official seals, several dozen are housed in old mansions and modern buildings on and off this main artery. The two-mile trek from Dupont Circle to the U.S. vice president’s home inside the U.S. Naval Observatory compound takes about an hour. 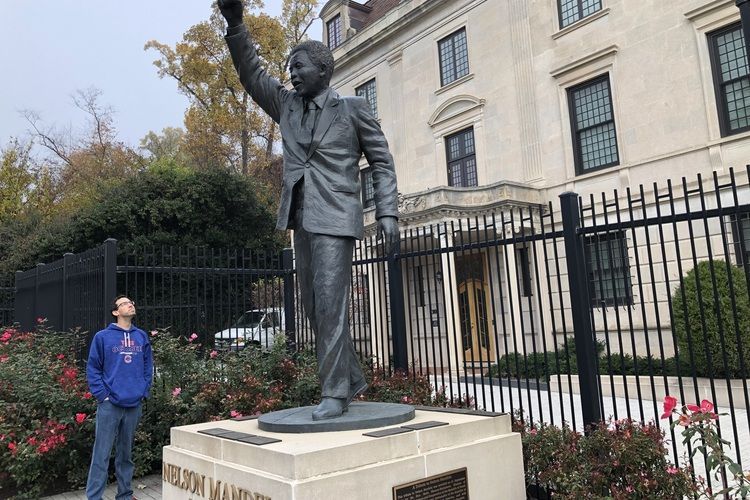 A statue of Nelson Mandela stands outside the South African Embassy on a stretch of Massachusetts Avenue known as Embassy Row. (Randy Mink Photo)

Besides the embassies of prominent countries like Japan, Indonesia, Korea, the Netherlands, and Greece, you’ll pass by the diplomatic missions of Malawi, Mauritius, Mauretania, and other lands seldom on our radar. A statue of Winston Churchill outside the British Embassy stands across the street from one of Nelson Mandela at the South African Embassy. The Turkish ambassador’s home on 23rd Street was built in 1914 for American industrialist Edward H. Everett, who invented the crimped bottle cap for Coca-Cola bottles. It features a statue of the revered Mustafa Kemal Ataturk, founder of the Republic of Turkey, as does the Turkish Embassy on Massachusetts Avenue. On S Street, the Woodrow Wilson House, the Georgian Revival retirement home of America’s 28th president, is open for tours.

The vibrant D.C. neighborhood is a window on the world in the most cosmopolitan part of town. Guests of the Courtyard Washington, D.C. Dupont Circle, can rest assured they’re in good company and moving about in the right circles.