Route 66, commonly considered the “Mother Road” of the United States, boasts many historical landmarks. In Oklahoma alone, there are hundreds of famous sites visited by those traveling the historic highway. But roadside attractions such as an 80-foot-long blue whale or a diner modeled after a famous filling station aren’t the only sights worth seeing. Numerous museums located along Route 66 in Oklahoma pay tribute to the highway itself—such as the National Route 66 Museum and Oklahoma Route 66 Museum—while several others represent important aspects of culture, science and entertainment.

The first of these museums, when traveling from the West, is the Roger Miller Museum. Roger Miller was a singer/songwriter who grew up on a farm in Erick, Okla., now home to the Roger Miller Museum. On display are artifacts, memorabilia, instruments and writings belonging to Miller. Visitors can see hand-written lyrics of his famous song King of the Road along with the figurine that inspired the song. The museum also houses archives of recordings, videos and photographs of Miller. Group tours can schedule meals through local restaurants or use the museum kitchen area for refreshments.

Roger Miller isn’t the only native Oklahoman to leave his mark on the world. After leaving Erick, head an hour east to Weatherford, home of The Stafford Air and Space Museum and birthplace of its namesake General Thomas P. Stafford. Recently named an affiliate of the Smithsonian Institution, the museum works closely with the National Air and Space Museum, NASA and the National Museum of the U.S. Air Force to develop and preserve educational exhibits on air and space. Full-scale replicas of the Wright Flyer, Wright Glider and the Spirit of St. Louis as well as actual aircrafts are housed inside. Hundreds of space artifacts can also be seen, including those highlighting Stafford’s historic Gemini 6, Gemini 9, Apollo 20 and Apollo-Soyuz missions.

After learning about the legacies of Oklahoma natives Roger Miller and Thomas Stafford, travelers can continue east along Route 66 to Oklahoma City where they can visit the Oklahoma City National Memorial and Museum and learn about the iconic day that forever changed the Sooner State, as well as the rest of the nation. 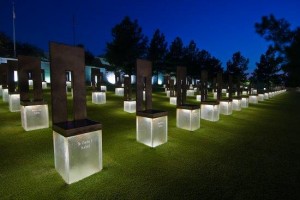 The outdoor memorial site of the Oklahoma City Bombing is comprised of the Gates of Time, Field of Empty Chairs, Reflecting Pool, Survivor Tree, Survivor Wall, Rescuers’ Orchard and a Children’s Area. The memorial site is also home to the Memorial Museum, where visitors can take a chronological tour of events during and after the bombing of the Alfred P. Murrah Federal Building on April 19, 1995. On display are damaged artifacts from inside the building as well as video images and sound clips. Groups can hear testimonies from survivors, rescuers, witnesses, and friends and families of those who lost their lives. The museum also showcases the city’s struggle to rebuild in the weeks, months and years after the bombing.

Oklahoma is also home to a rich heritage centered around the “Wild West,” which can be discovered at the National Cowboy and Western Heritage Museum. As a leading repository of Western art and artifacts, the National Cowboy and Western Heritage Museum offers exhibits on the American West. Highlights include Prosperity Junction, a replica turn-of-the-century cattle town; Firearms Gallery, housing over 100 historic and rare pieces; and the Museum of the Frontier West, which focuses on Native American, early frontier, military and hunting life. At the interactive Cowboy Corral, children can play dress up, ride a stationary horse, solve puzzles and build a campfire at a chuckwagon.

Before leaving Oklahoma City, groups should stop by Science Museum Oklahoma to learn the exciting fun behind science. Science Museum Oklahoma includes a planetarium, Dome Theater and a Science Live Theater. From hands-on displays such as the Tinkering Garage, Geometry Playground and Explorazone to collections on aviation, trains, gymnastics and geometric art, Science Museum Oklahoma offers fun for groups of any age. Whodunit, the newest exhibit, is in partnership with the Oklahoma State Bureau of Investigation to bring to life the science behind solving crimes.

Just under and hour east of Oklahoma City, travelers can visit the Lincoln County Museum of Pioneer History, located in Chandler, where they can learn about early settlers of Lincoln County dating back to the late 1800s. The main floor galleries begin with the Indian Removals and progress through the naming of Lincoln County and creation of churches, schools and businesses. The second floor galleries focus on the people of Lincoln County and includes exhibits such as a Hall of Heroes honoring men and women of the military dating from the first National Guard Encampment through the war in Iraq and a Hands on History children’s area discussing how past generations played, learned and lived. Also located at the museum is Miss Faye’s Historical Marionette Theater. The Lincoln County Museum of Pioneer History is located in three historic buildings located along Route 66.

Much like Roger Miller and Thomas Stafford, Will Rogers was an Oklahoma native that left his mark on his home state. Groups continuing east along Route 66 can stop in Claremore, just outside of Tulsa, and learn about his life and legacy at the Will Rogers Memorial Museum. 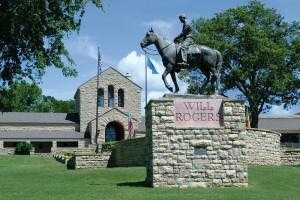 Known as Oklahoma’s favorite son, Will Rogers was a beloved actor and author born in Oolagah, Cherokee Nation near Claremore. The Will Rogers Memorial Museum houses the largest collection of documents belonging to Will Rogers, including 18,000 photographs. Exhibits include Rogers’ saddle collection and various memorabilia. Movie posters, paintings and sculptures can also be seen throughout the museum. The Will Rogers Birthplace Ranch is located 12 miles north of the museum and both are open daily for tours.

Motorcycle buffs won’t want to miss the Route 66 Vintage Iron Motorcycle Museum, located in Miami along Oklahoma’s eastern border. Check out a large collection of vintage motorcycles, a vintage helmet wall and an Evel Knievel exhibit featuring over 100 artifacts belonging to the famous daredevil. The museum is also home to one of the largest Steve McQueen private collections in the country. Rare motorcycles such as a 1917 Harley Davidson, a 1945 AJS and a 1957 Ariel Red Hunter are also on display. Even groups with without motorcycle buffs will enjoy the history inside the Vintage Iron Motorcycle Museum. And best of all, admission is free.

A trip along the Mother Road in Oklahoma offers many options for groups to explore, such as iconic roadside attractions and Route 66 themed museums.  The museums suggested above present even more opportunity for travelers to delve into all that Oklahoma has to offer.

If your group has already visited one of the museums mentioned above, let us know what you liked best in the comments section below. Also, be sure to let us know of any other museums that might interest groups planning to travel along Oklahoma’s Route 66.

Ashley Braun is an Editorial Intern at Premier Tourism Marketing. She has a Bachelor’s Degree in English – Creative Writing from Kentucky Wesleyan College and is currently working on her Master’s Degree in Writing and Publishing at DePaul University.