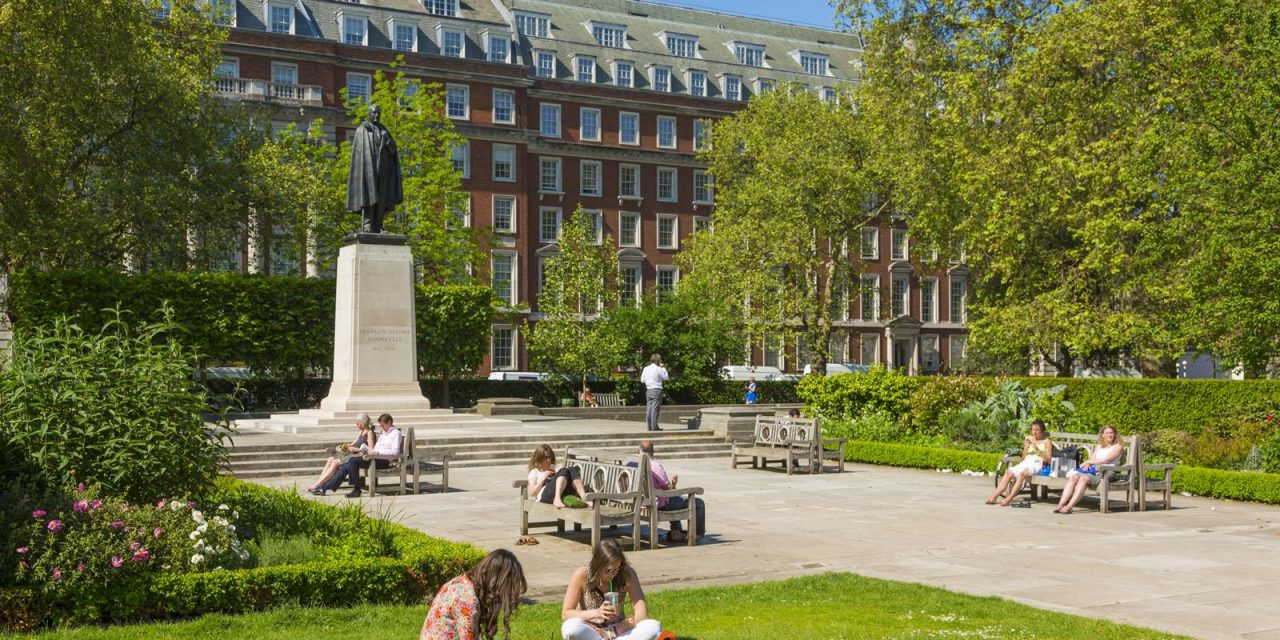 One of my favorite things to do in London is explore individual neighborhoods. In a city that can be so overwhelming, it helps me narrow my focus and appreciate little slivers of urban life.

On my most recent trip to London I wanted to get a feel for how the other half lives, so I opted for a walking tour of posh Mayfair. This West End neighborhood, bounded by Hyde Park, Oxford Street, Regent Street and Piccadilly, is home to 5,200 residents, 3,800 five-star hotel rooms and 26 Michelin-star restaurants—at least that’s what is proclaimed in the window of Wetherell Estate Agents, a real estate office where we made a brief stop on our two-hour tour. 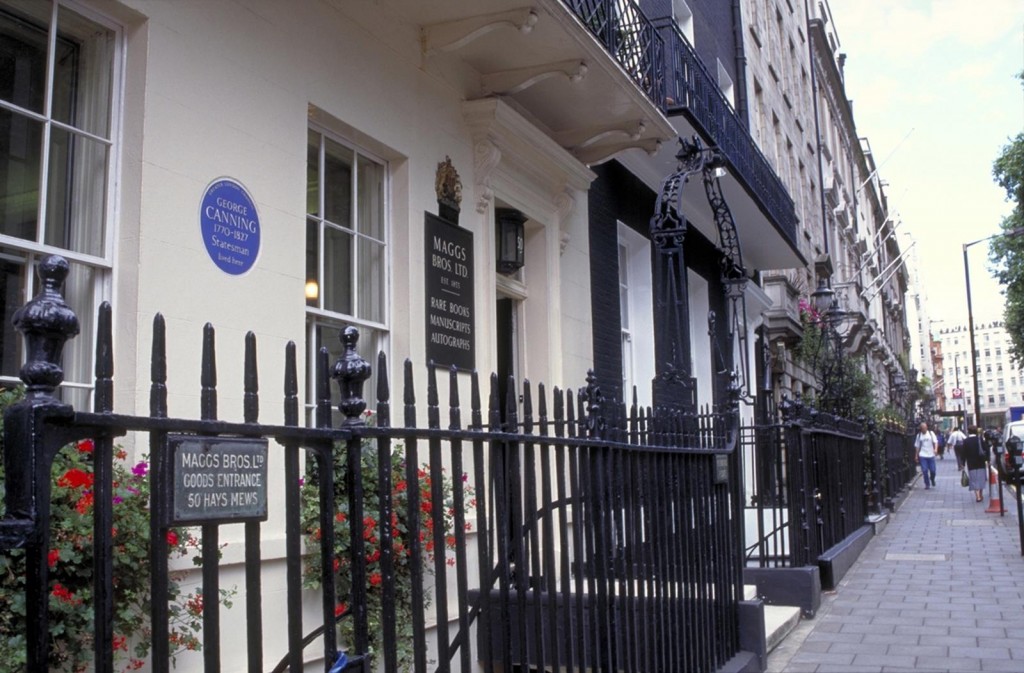 Pausing to read the listings for Mayfair properties, we were aghast at the prices. Some penthouses go for more than $50 million. The weekly rent for one unit: a mind-boggling $12,000. So, who can afford these places? Russian and Ukrainian oligarchs and oil-rich Middle Easterners, that’s who, according to Richard, our guide.

Our group of 15 met Richard outside the Green Park Tube station, across from The Ritz. We had chosen the “Old Mayfair” tour, offered every Thursday by LondonWalks, a company that runs more than 100 themed tours a week. Besides neighborhood tours, there are walks centered around famous people, from the Beatles to Charles Dickens. Movie fans might choose “Harry Potter Film Locations,” while those looking for a nighttime prowl can do “Jack the Ripper Haunts.” Private group tours can be arranged. (www.londonwalks.com). 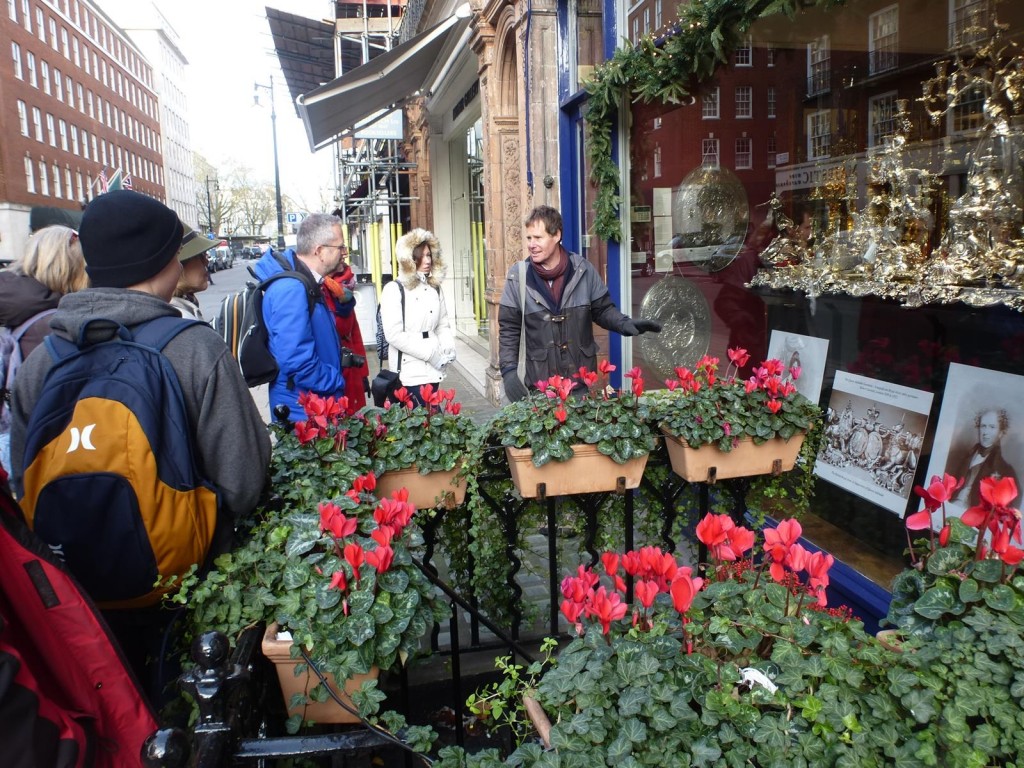 In Mayfair, Richard showed us historic sites, shops, parks, churches, restaurants and nightspots, weaving in celebrity gossip along the way. Since Mayfair is largely residential, the streets are quieter than others in central London, and there are few high-profile sights that draw hordes of tourists. It’s a good place for strolling and taking in the privileged atmosphere.

One of my favorite spots on the tour was Shepherd Market, a village-like hodgepodge of shops, restaurants and atmospheric Victorian pubs (like Ye Grapes, circa 1882). Centered around a small square fed by little alleyways, it’s a tucked-away gem (named for Edward Shepherd, not because sheep once roamed there).

On Mount Street, Richard pointed out Scott’s, the restaurant where, in a well-publicized incident in 2013, TV chef Nigela Lawson was almost strangled by her husband at a sidewalk table. Richard also took us by Annabel’s, a night club on Berkeley Square where Princess Diana and Sarah Ferguson, posing as police officers, crashed Prince Andrew’s stag party in 1986 (and got in trouble with the real police). We walked through leafy Berkeley Square, which is actually rectangular, and admired the park’s Dale Chihuly sculpture and majestic plane trees, the oldest and largest in London, dating from the 1780s. 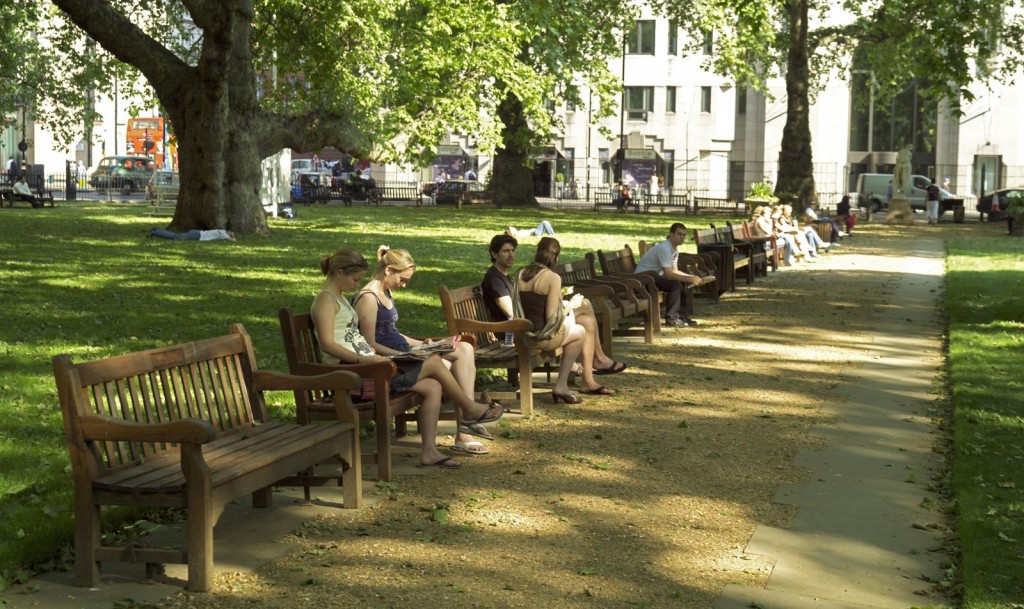 Across from the park, we passed chic shops like Oscar de la Renta before making a stop in front of London’s oldest butcher shop, Allens of Mayfair, to ogle the cuts of Australian wagyu beef (almost $200 a kilo) and grouse ($25/kilo), along with other game like pheasant and partridge. Then we walked through another green space, the gardens outside the 1840s-era Farm Street Church, a Jesuit Catholic parish where we went into the sanctuary (our only inside stop on the tour) and spent 10 minutes admiring the stained glass and other treasures.

London’s most expensive district got its name, Richard told us, from the annual fair in May that drew rowdy crowds as far back as the 1600s. They would come to to see jugglers, fire-eaters and sword swallowers. In the 18th and 19th centuries the landed gentry maintained elegant rowhouses in Mayfair, and much of the land was owned by the Grosvenor family, early property developers who became the richest urban landlords in England. 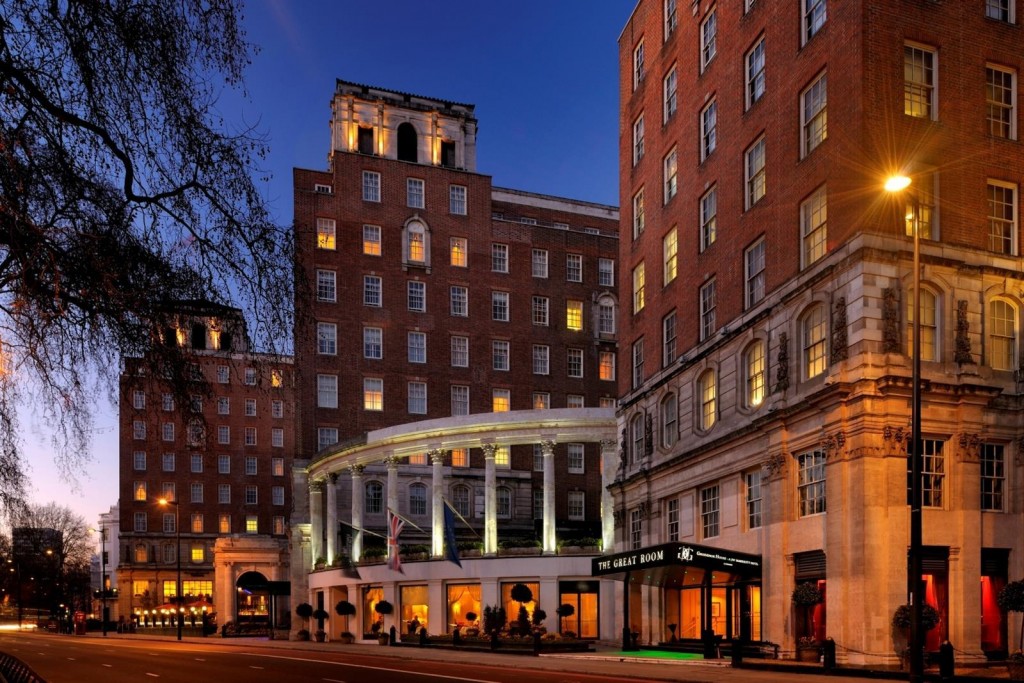 The family’s London home for over 100 years was called Grosvenor House, which now lends its name to London’s largest five-star hotel, the 494-room Grosvenor House, a JW Marriott Hotel. Known as the “Grande Dame of Park Lane,” the hotel opened in 1929 and became a JW Marriott property in 2008. I was lucky enough to stay at this quintessentially British hotel, one of several five-star properties in Mayfair. It has a long tradition of hosting high society events. Guests have included film stars, diplomats, politicians and business tycoons. Princess Elizabeth, the future Queen Elizabeth II, learned to skate, at the age of seven, on the hotel’s ice rink, which later was converted into the Great Room, the largest hotel banqueting space in Europe. 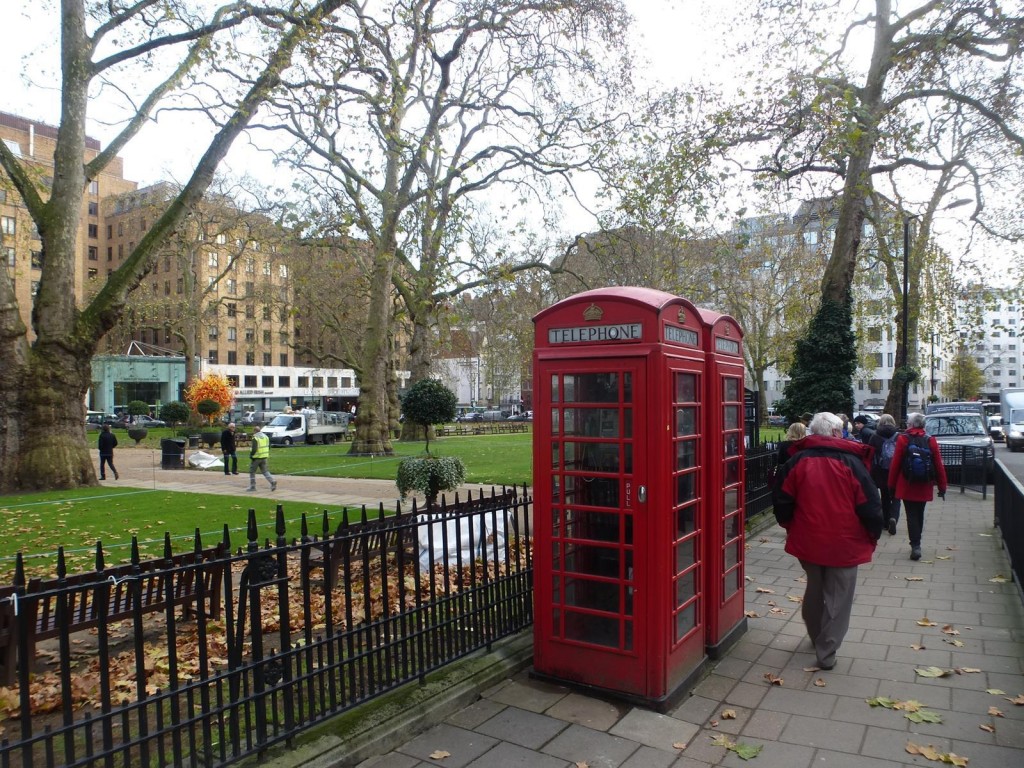 In London I like reading the blue-and-white plaques affixed to the buildings where famous people lived, and Mayfair has had more than its share of notables. The home at 22 Charles Street, for example, was once occupied by the Duke of Clarendon, later to become King William IV (1830-37). Across the street was one of 17 homes owned by the current Sultan of Brunei. A block away, on Chesterfield Street, our group stopped at a rowhouse inhabited by Beau Brummel, an arbiter of gentlemen’s fashion in the early 1800s, and later by Anthony Eden, a prime minister of Great Britain. Next door a plaque marks the residence of novelist William Somerset Maugham. Composer George Frederic Handel also lived in Mayfair and his home is now a museum.

Besides attached houses, the area also still has some stand-alone mansions from the 1700s and 1800s. One is the well-guarded Saudi ambassador’s residence, where our group was getting a brief look through the gates until Richard hurried us along, saying, “They’re very heavy on security so we’re going to have to move on before we get shot.” 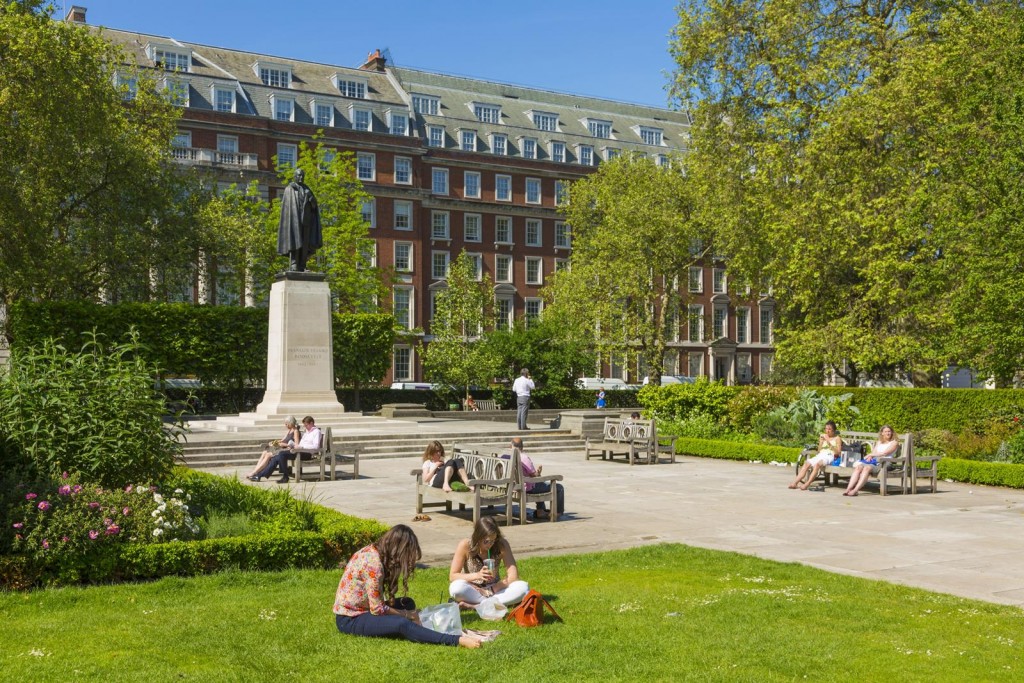 Statue of Franklin D. Roosevelt in Grosvenor Square, site of the American Embassy in London. (London on View/Pawel Libera)

The last stop on our tour was Grosvenor Square, a green expanse bounded on one end by the American Embassy. Outside the embassy are statues of Presidents Dwight Eisenhower (in military dress) and Ronald Reagan. (Eisenhower’s wartime headquarters were at No. 20 Grosvenor Square.). A statue of Franklin D. Roosevelt stands in the middle of the square, and the 9/11 Memorial Garden honors British victims of the U.S. terrorist attacks of September 11, 2001.