Offering intimate insights into Europe’s largest city, LondonWalks’ themed walking tours get tourists off the beaten path and reveal slices of London that might otherwise go unnoticed. Our writer describes his guided tour through the tony St. James’s neighborhood in the West End.

With its layers and layers of history, tangle of streets and alleyways, and just its sheer energy and size, London can be overwhelming whether you’re a first-time visitor or an old hand. Where to begin?

I recommend doing a slice at a time—and doing it with LondonWalks, a tour company with dozens of themed walking tours in all corners of the British capital.

I love exploring a new neighborhood, a new attraction, a new store, every time I find myself in London. On a recent visit (my 13th) I joined a walking tour soon after arriving at Heathrow Airport and checking in to my hotel. It was Friday and I was staying in the Mayfair district, so I chose LondonWalks’ “The Old Palace Quarter,” which leaves at 2 p.m. every Wednesday and Friday from Green Park, just a few blocks from my hotel, the Chesterfield Mayfair.

I wasn’t sure exactly what I would see on this tour, but the time and place were right, the word “palace” made it sound intriguing to this amateur royal watcher and it covered a West End neighborhood I wanted to know more about—St. James’s. The price was right, too—about $15.

The two-hour ramble—through parks, down side streets and tucked-away lanes, and into hidden courtyards and mews—turned out to be lots of fun, largely because of our spritely guide, Hilary. Sprinkling the walk with stories and bits of history and gossip, she showed us things we would not have noticed—or found—on our own. Her commentary was breezy, never droning nor didactic.

Our group of 25 or so did not go into buildings, except for a church, but Hilary told us what we would see if we did, offering suggestions for individual visits later—whether it was going back to Dukes Hotel for afternoon tea, touring a private palace or poking around the world’s oldest hat shop. 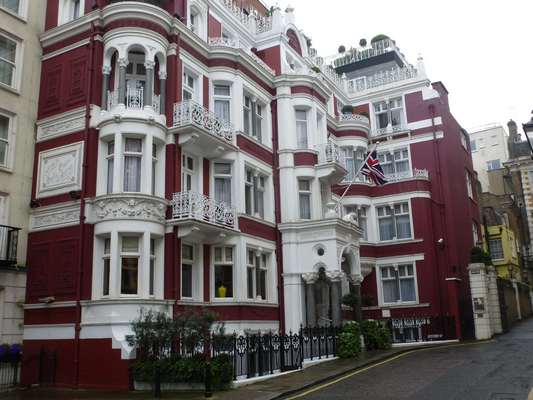 The tour covered only a small area, but one packed with little gems. Several stops focused on gentlemen’s clubs and exclusive shops catering to men, hallmarks of St. James’s, a place that reeks of privilege, tradition and old money.

We gathered for the tour at the fountain in Green Park, part of the necklace of greenery that infuses central London with a breath of fresh air. Like nearby St. James’s Park, Hyde Park and Kensington Gardens, Green Park was once a royal hunting ground stocked with deer, Hilary told us.

We then went into a residential area bordering the park and clustered in front of Spencer House, London’s finest surviving 18th century townhouse, built in 1756-66 for the first Earl Spencer, an ancestor of Diana, Princess of Wales. Generally open for tours on Sunday, the magnificent private palace, with its gilded interiors and furniture, gleams from a painstaking restoration bankrolled by its owner, the Rothschild banking group. Artwork includes five Benjamin West paintings lent by her Majesty The Queen. 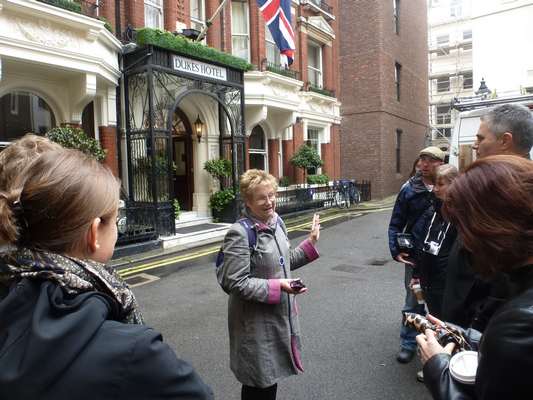 At Dukes Hotel it started to drizzle, so we huddled together with our umbrellas to shelter each other. (Each of LondonWalks’ tours operates as scheduled, rain or shine.) Hilary recommended Dukes for its authentic British tea. At the Stafford London a few minutes later, she suggested patronizing the American Bar, famous for its martinis. Jutting out into the hotel’s cobbled courtyard, formerly the mews and stables for 18th century nobility, is a wing of country-chic guest rooms named after famous race horses. I recognized one name— Man O’ War.

Especially intriguing were Hilary’s tales about the men’s social clubs found throughout St. James’s. London once counted 400 such clubs; about 40 remain. Some operate pretty much as they always have—with strict rules on women allowed through their doors. White’s, for example, does not even admit women as guests—one reason, it’s said, that Prime Minister David Cameron, before his election, gave up membership in the all-male bastion that also counts Prince Charles and Andrew Parker Bowles, Camilla’s ex-husband, as members. Boodles & Brooks, across St. James’s Street, admits women as guests only, while the Royal Overseas League and St. James’s Club, both on Park Place, now accept female members.

Jermyn Street, along with others in the neighborhood, abounds with high-end merchants offering high-quality goods. Many display royal warrants, meaning they provide goods and services to members of Britain’s royal family.

A sign in the window of Turnbull & Asser, a maker of custom dress shirts for such notables as Prince Charles, proclaims, “Putting the peacock amongst the pigeons since 1885.”

Down the street, at the entrance to Piccadilly Arcade, stands a bronze statue of Beau Brummel (1778-1840), an arbiter of gentlemen’s fashion and the epitome of an English dandy. The prestigious shopping arcade connects Jermyn Street to Piccadilly, the busy thoroughfare that feeds into tourist-thronged Piccadilly Circus. Piccadilly Arcade shops include Favourbrooke, which specializes in vests, and The Barber Shop and Grooming Center, one of St. James’s old-fashioned barber shops stocked with shaving brushes, creams, lotions, soaps and various grooming accessories for the pampered male. You might go in for a beard or moustache trim or enjoy a hot-towel shave.

Back on Jermyn Street, other shops worth a peek include Taylor of Old Bond, another shave shop; Longmire Cufflinks; Floris (for perfumes) and Paxton & Whitfield cheesemongers.

On Duke of York Street at St. James’s Square, Hilary pointed out the plaque marking the site of the house of Henry Jermyn, Earl of St. Albans (1605-1684), the shopping street’s namesake. Known as the “father of the West End,” he is credited for much of its development, including the stately square, a leafy private park with an equestrian statue of King William III. Also part of his plan for the residential neighborhood was St. James’s Church Piccadilly, a brick building designed by Sir Christopher Wren, the architect of London landmarks like St. Paul’s Cathedral. We had five minutes to explore the sanctuary on our own or visit the craft and gift stalls in Piccadilly Market in the church’s courtyard. 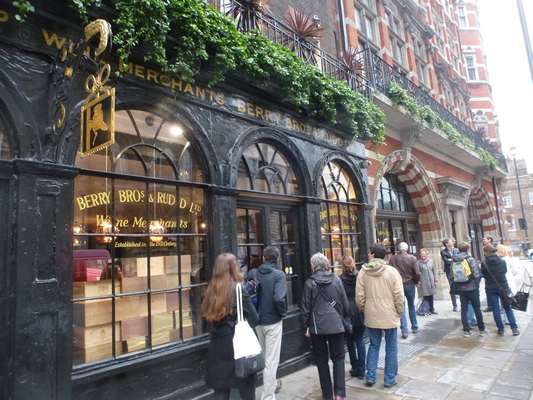 The last leg of our tour had Hilary leading us down St. James’s Street, past Lock & Co., a family-run business that’s been around since 1676 and claims to be the world’s oldest hatter. The shop welcomes curiosity-seekers, she said, and displays pictures of famous customers who have ordered hand-blocked top hats, bowlers, riding hats and fancy chapeaux worn by ladies attending the Royal Ascot races. Next door is Berry Bros. & Rudd, a family-run wine shop dating to 1698; a plaque on the building informs passersby that it once housed the Republic of Texas embassy from 1842-45 (before Texas became a state). 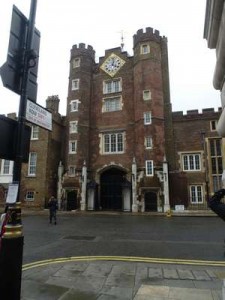 Our final stop, before returning to Green Park, was St. James’s Palace. London’s senior royal palace, the red-brick Tudor building was built 300 years before the ascension of Queen Victoria, who made Buckingham Palace the sovereign’s primary residence. It was home to such monarchs as Queen Elizabeth I and Charles I. Today Prince Charles and Camilla, Duchess of Cornwall, live in the complex’s Clarence House, the Queen Mother’s residence until her death at 101 in 2002. Our group paused outside the police-patrolled gate as Hilary dished out some royal tidbits, including the fact that the palace chapel was the site of Prince George’s recent christening and resting place for Princess Diana’s coffin for five days before the funeral at Westminster Abbey in 1997. An ambassador to the Court of St. James’s refers to foreign envoys accredited to the United Kingdom.

When our tour came to an end, I told Hilary I could have listened to her for another hour. It was so satisfying to explore London with a personal guide and without hordes of tourists all around. Looking back on my London trip, I remember those little shops and historical plaques more than I do hotspots like the British Museum and National Gallery, which can overwhelm. 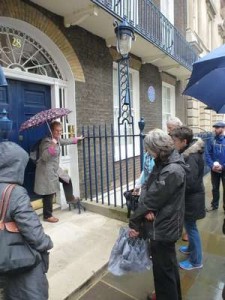 A townhouse in St. James’s

I was tempted to sign up for a LondonWalks pub tour the following night, but realized I was already overscheduled. So, that’s high on my list for next time.

Private tours can be arranged for groups and targeted to their interests. (londonwalks.com)