No matter how many times you’ve seen pictures of the Taj Mahal, feasting your eyes upon this marble monument to love is one of those unforgettable travel moments.

“It has to be seen to be felt, it has to be absorbed,” said Anil Bahal, our tour director on a Globus FAM trip to Northern India’s Golden Triangle, a well-traveled tourist area anchored by Delhi, Jaipur and Agra. 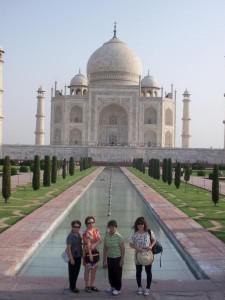 An early morning visit to the Taj Mahal was the high point of our stay in Agra, a city of 1.5 million that relies heavily on tourism. To protect one of the world’s most famous buildings from pollution, no heavy industries are allowed within 40 miles of the pearly white landmark built by Mughal Emperor Shah Jahan as a monument to his wife, who died in childbirth.

After a short horse carriage ride through the awakening streets of Agra, early-rising Globus groups enter the gates of the Taj Mahal well before the camera-laden hordes arrive. The lines were short as we had our bags checked. Among things not allowed: cigarettes, candy and gum.

In the cool of the morning, we had an hour and a half to explore the grounds, encountering pigeons, stray dogs and entrepreneurial types offering pointers on the best photo angles. These touts show you exactly where to stand for capturing that classic shot of the shrine’s reflection in the Lotus Pool—and, of course, expect a tip for the service.

The Taj, a dream-like blend of domes, cupolas, minarets and delicate filigree marble screens completed in 1653, reveals further delights as you approach the terrace outside the entrance to the tombs of the royal couple. First you have to put on shoe covers handed out by attendants stationed at the steps before examining the intricate details of relief carvings, paintings and calligraphy with Koranic inscriptions that adorn the building’s exterior. Most impressive is the decorated marble inlay in which delicately cut slivers of semi-precious stones—agate, carnelian, turquoise, malachite, lapis lazuli—create flower and foliage motifs representing an Islamic garden of paradise. The same stonework, a process known as pietra dura, embellishes the pair of white marble centographs, or false tombs, in the chamber beneath the central dome. The actual graves of the emperor and his wife lie below the floor, in a crypt closed to the public.

After the main building, there’s more to see on the terrace overlooking the Yamuna River. Mosques flank either side of the Taj; one is actually a false mosque, built to enhance the symmetry of the harmonious architectural ensemble. 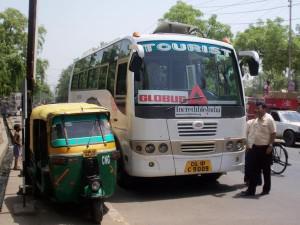 Globus tour groups in Agra find more than just the Taj Mahal. One of our stops was the Itimad-ud-Daulah’s Tomb, a small elegant garden tomb that foreshadows the marble inlay and lattice work of the Taj Mahal. In fact, this exquisite jewel box, built in the 1620s, is called the “Baby Taj.”

Another sightseeing staple is the Agra Fort, a vast complex of courtly buildings with red sandstone ramparts high above the Yamuna River. A majestic symbol of the Mughal dynasty that flourished in the 16th and 17th centuries, it was built by Akbar, the greatest of the Mughal emperors. Several lookout points provide views of the Taj Mahal.

At Kalakriti, an Agra crafts emporium, our group had a chance to see the marble inlay process demonstrated by artisans whose families have passed on the skill. We watched as they scraped the marble surfaces, ground the stones and placed them in decorative tabletops and trays. Besides floral designs, the artisans also fashion peacocks, elephants, birds and the Taj Mahal from the chips of stone and abalone. The shop offers a wide range of marble inlay products, from pill and jewelry boxes to chessboards and coaster sets.

One of the most fascinating sights in Agra was the scene of boys swimming in the river with water buffalo. We later saw the beasts being herded along the roadside or just wandering at random in the streets. The water buffalo, valued for its milk and hide, is the source of leather in India because the Hindus consider cows to be holy. Shoemaking is one of Agra’s biggest industries; Hushpuppies and Clarks outsource work to Agra leather factories. 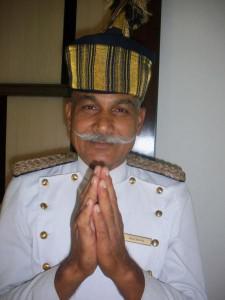 The Trident Hotel in Agra, like others on Globus tours of India, provided our group a gated escape from the intensity of the city. Built around a grassy, palm-studded courtyard with a swimming pool, the two-level hotel provided the gracious service with a smile we came to expect in India. In-room amenities included flat-screen TVs, coffee makers and tea service. Rooms have a shower, but no tub.

The Trident’s lavish breakfast buffet offers everything from Indian lentils and rice to French toast and pancakes with syrup. Some of us were pleased to see peanut butter next to the jams. Juice choices were papaya, watermelon, lime and tomato.

Our FAM trip to the Golden Triangle was an abbreviated version of Globus’ 14-day “Secrets of India,” which also includes Varanasi, the holiest of Hindu pilgrimage cities; Khajuraho temples; Udaipur; and Ranthambore National Park, famed for its tigers. Departures are scheduled from September to March, with groups limited to 20 in a full-size motorcoach. A few flights and a train ride are included as well. The tour is priced from $2,929, plus air. (www.globusfamilygroups.com)