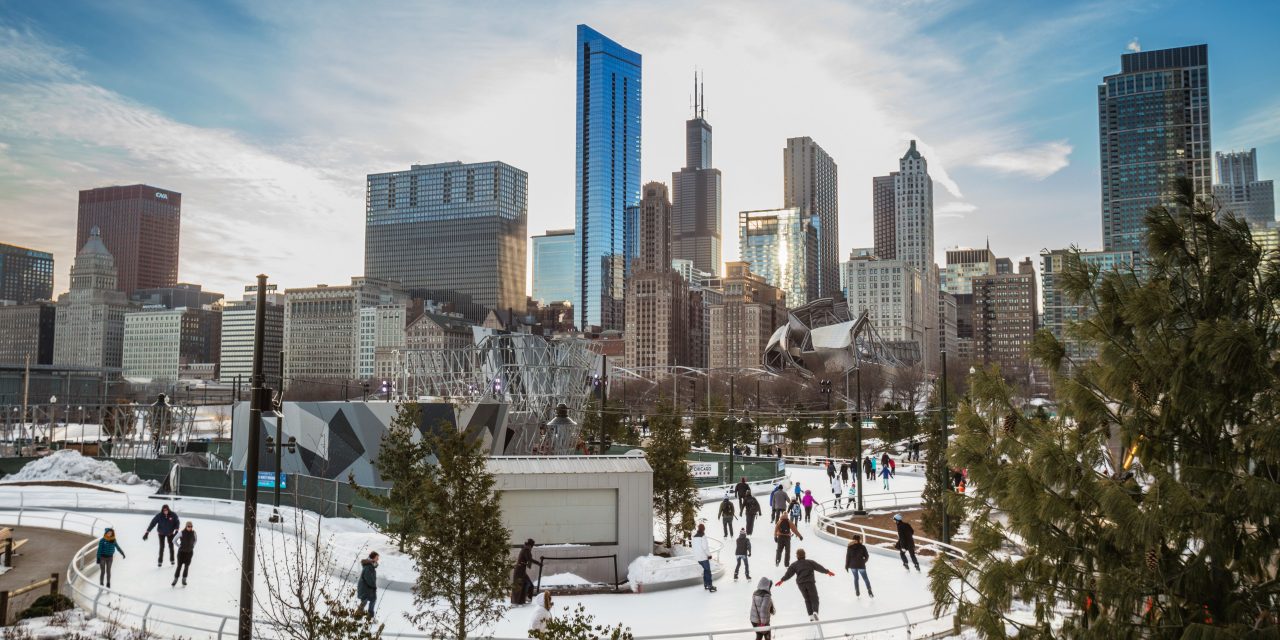 Winter may not be peak travel season in Illinois and the rest of the Midwest, but those who embrace the colder months reap unexpected rewards. Instead of hibernating, visitors simply put on an extra layer or two as they prepare to hit the road and make exciting new discoveries. Indoors and out, Illinois has much to offer tour groups, from snow-packed hiking trails and daunting ski slopes to cozy lodges and festive yuletide events.

Botanical conservatories, with their lush vegetation and splashes of color, are oases of nature sure to perk up anyone wallowing in the winter doldrums. These climate-controlled spaces vicariously transport us to warmer places.

Garfield Park Conservatory, a 1908 landmark on Chicago’s West Side, is one of the largest and most stunning in the nation. Its eight indoor display gardens span two acres, showcasing thousands of plant species from around the world. The Palm House, the largest room, features more than 70 graceful palms and other plants from warm habitats. Other highlights include the Fern Room and Desert House. In Rock Island, the Tropical Sun Garden is the centerpiece of the Quad City Botanical Center. Growing under the atrium’s 70-foot-high skylight are jasmine, orchids, bromeliads and a collection of fruit-bearing plants, including coconut, cocoa, coffee, vanilla and banana trees. A 14-foot waterfall and koi pond add to the otherworldly magic. Along the banks of the Rock River in Rockford, reminders of the tropics beckon visitors to Nicholas Conservatory and Gardens, where water features, seating areas and sculptures enhance the landscapes under glass. The glass-domed conservatory and greenhouse areas of Springfield’s Washington Park Botanical Garden take visitors on a trip around the world, to tropical Africa, the jungles of Asia and the rainforests of South America.

Bald eagles, once rare in Illinois, now make the state one of their favorite winter hangouts, fueling tourism in many locations. Spotting them along the Mississippi and Illinois rivers is a popular activity from late December to early March, with January and February the best months for eagle viewing. The wintering birds fly south from the icy climes of northern Minnesota and southern Canada in pursuit of fish and milder weather. Preferring the open waters around locks and dams, they often can be seen sitting on ice floes or perched in trees. At times the skies may be full of soaring eagles. Illinois’ bald eagle population is estimated at 3,000. Only Alaska draws more of America’s bird. 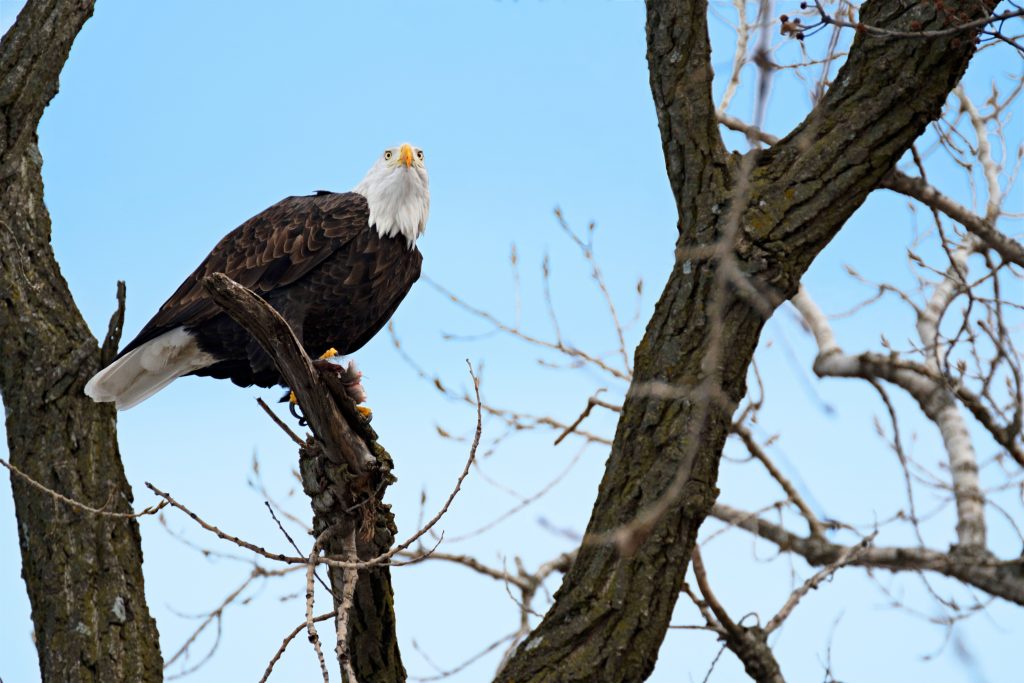 Bald eagles, once rare in Illinois, now make the state one of their favorite winter hangouts, fueling tourism in many locations. (Photo courtesy of Enjoy Illinois)

Along the Mississippi in the Quad Cities area, eagle watching spots include Lock and Dam No. 15 at Schwiebert Riverfront Park and Arsenal Bridge in Rock Island, Sylvan Island in Moline and Illiniwek Forest Preserve in Hampton. In Quincy, birdwatchers flock to Lock and Dam No. 21. Among hubs for eagle sightings in the Alton area of southwestern Illinois are National Great Rivers Museum/Melvin Price Locks and Dam, Pere Marquette State Park (on the Illinois River) and Lewis & Clark Confluence Tower, whose platforms offers panoramic views of the meeting of the Mississippi and Missouri rivers. In Alton and Grafton, be sure to take a guided Eagle Shuttle Tour available on Saturdays in January for optimal eagle watching enjoyment. On selected weekends, many communities, state parks, wildlife refuges and recreation areas along the Mississippi Flyway, the avian equivalent of a superhighway, offer naturalist-led programs and tours focusing on the migrating birds of prey.

Farther north on the Illinois River, Starved Rock State Park attracts large eagle populations thanks to nearby Plum Island Eagle Sanctuary, which is owned by the Illinois Audubon Society. Bird enthusiasts can view eagles from atop Starved Rock or catch an eagle trolley tour (lunch included) that departs from the park’s lodge for the Illinois Waterway Visitors Center.

For high-speed excitement, active groups schuss over to Snowstar Winter Park in Andalusia, a great place for downhill skiing, snowboarding, snow tubing and ice skating. The 28-acre playground, resting above the Mississippi River just outside the Quad Cities, offers 15 trails and a terrain park with 40+ jumps, rails and boxes for all levels. Snowstar’s four ski lifts, two magic carpet tows and a tow rope make it easy getting to the top.

Also overlooking the Mississippi, Galena’s Chestnut Mountain Resort lures skiers and snowboarders with Farside Terrain Park and 19 downhill runs that range from smooth and easy to steep and heart-pounding. One of the Midwest’s top ski resorts, Chestnut Mountain features a 475-foot vertical drop, and the longest descent is 3,500 feet. Situated on 220 rolling acres, it offers more than 100 slopeside rooms and three eateries, plus an indoor pool, sauna and hot tub. Nearby, the Nordic Center at Eagle Ridge Resort maintains miles of groomed trails for snowshoeing (rentals available) and offers ice skating and sledding as well. For more winter sports action in northwest Illinois, there’s Snow Park at Alpine Hills in Rockford, which offers tubing and a terrain park for snowboarders.

Even in suburban Chicago, the hills are alive with the sounds of happy skiers. Villa Olivia in Bartlett is a center for skiing, snowboarding and tubing, providing seven runs, a chairlift and six rope tows. Skiers and boarders also find their way to the slopes of Four Lakes Alpine Snowsports in Lisle.

Many Illinois state parks welcome winter visitors eager to get out and explore nature on hiking and cross-country ski trails. On paths that pass sandstone bluffs and skirt the Illinois River, hikers at Starved Rock State Park can reach seven overlooks to view frozen waterfalls in the canyons and perhaps spot a daring ice climber. Afterwards, it’s time to cozy up before the fireplace in one of the cabins or at the rustic 1930s lodge.  A few minutes away, Matthiessen State Park offers six miles of tree-lined trails for cross-country skiing and maintains an equipment rental kiosk on snowy weekends.

Rock Cut State Park near Rockford offers a winding system of cross-country ski trails that showcase winter’s beauty, with skis and snowshoes available for rent. In the southern part of the state, winter is a good time for hiking in the wilderness preserves of Shawnee National Forest because the weather is generally mild and explorers can pretty much have the trails all to themselves.

For those who would rather watch than play, arenas across Illinois teem with sporting activities throughout the colder months. Chicago’s United Center hosts the National Hockey League’s (NHL) Chicago Blackhawks and National Basketball Association’s (NBA) Chicago Bulls. In the suburbs, the Chicago Wolves of the American Hockey League play at Allstate Arena in Rosemont, while the Windy City Bulls of the NBA G League, an affiliate of the Chicago Bulls, hold court at NOW Arena in Hoffman Estates. The Rockford IceHogs, the American Hockey League affiliate of the Chicago Blackhawks, compete at BMO Harris Bank Center in downtown Rockford. Moline’s TaxSlayer Center is home to the Quad City Storm professional hockey team. The semi-professional Peoria Rivermen hockey club plays at the Peoria Civic Center. 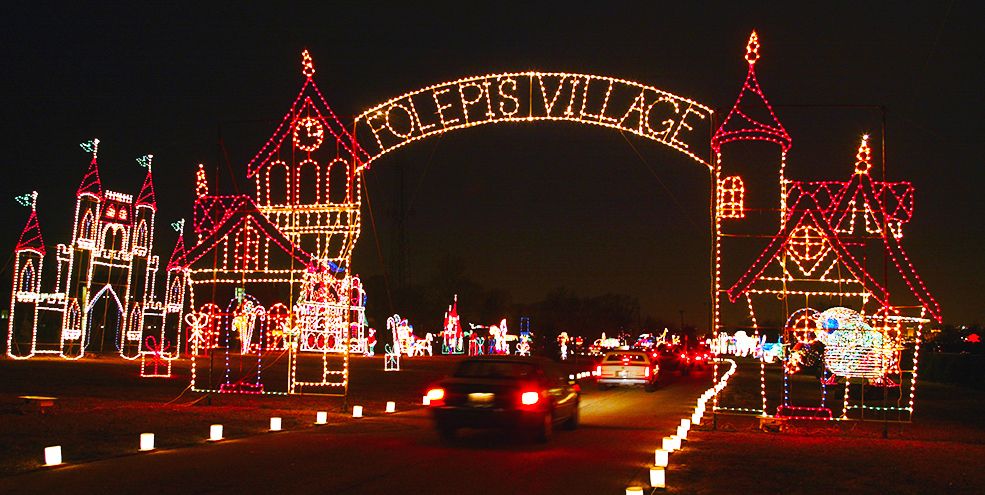 The drive-through East Peoria Festival of Lights, for example, is a 38-year tradition that welcomes buses as well as cars.

Groups planning a Christmastime trip in Illinois will find plenty of places that make the season merry and bright. The drive-through East Peoria Festival of Lights, for example, is a 38-year tradition that welcomes buses as well as cars, and step-on tour guides are available to comment on the electrifying extravaganza of Folepi’s Winter Wonderland. (The festival’s mascot is Folepi the wooden soldier, whose name serves as an acronym for “Festival of Lights, East Peoria, Illinois.”) On view from Thanksgiving weekend until New Year’s, the display includes the majority of floats from the festival’s kickoff Parade of Lights, plus illuminated arches, circus animals, a candy cane factory, a Western town, and prehistoric- and space-themed lands.

In Belleville, the National Shrine of Our Lady of the Snows, which sprawls across 200 hilltop acres overlooking the Mississippi River Valley, hosts Christmastime’s Way of Lights, an annual crowd-pleaser since 1970. Illuminated scenes with more than one million lights tell the story of Christ’s birth. Other highlights include camel, donkey and pony rides, and the visitor center has a life-size LEGO-brick Nativity scene.

The Grandpa Gang in Alton creates a winter Christmas Wonderland in Rock Springs Park with over four million lights shaping holiday displays like the iconic Robert Wadlow, the world’s tallest man, and a scenic light tunnel. World Wide Technology Raceway in Madison gets in to the holiday spirit with its annual WonderLights Display along the racetrack. The light show is synchronized to a musical soundtrack.

Nearly three million lights enchant yuletide revelers at Holiday in the Park, an annual walk-through event at Six Flags Great America in Gurnee. From Thanksgiving weekend to early January, visitors strolling the theme park’s midway encounter dazzling displays of light complemented by music, stage shows,  costumed characters and s’mores roasting pits. The rollercoasters are silent, but a few family rides are open. At Chicago Botanic Garden in Glencoe, the annual Lightscape spectacle invites visitors to embark on a one-mile path through colorful ribbons of light, step inside a cathedral of golden light and listen to a playful choir of “singing” trees. Light Up the Lake at Navy Pier in Chicago is an indoor display of large light sculptures.

Holiday Magic at Brookfield Zoo is Chicagoland’s longest-running lights festival, featuring a 41-foot-tall Christmas tree adorned with thousands of brilliant LED lights and choreographed to seasonal tunes, some 700 other Christmas trees and larger-than-life illuminated animal sculptures, including a giraffe, bison, bear and reindeer. Indoor and outdoor animal habitats such as Tropic World, Pachyderm House, Big Cats and Great Bear Wilderness are open during Holiday Magic. At Lincoln Park Zoo on Chicago’s North Side, ZooLights abounds with photo ops. The holiday light show features tunnels of twinkling lights, an Enchanted Forest and a Light Maze with 3D displays that can be viewed through special glasses. 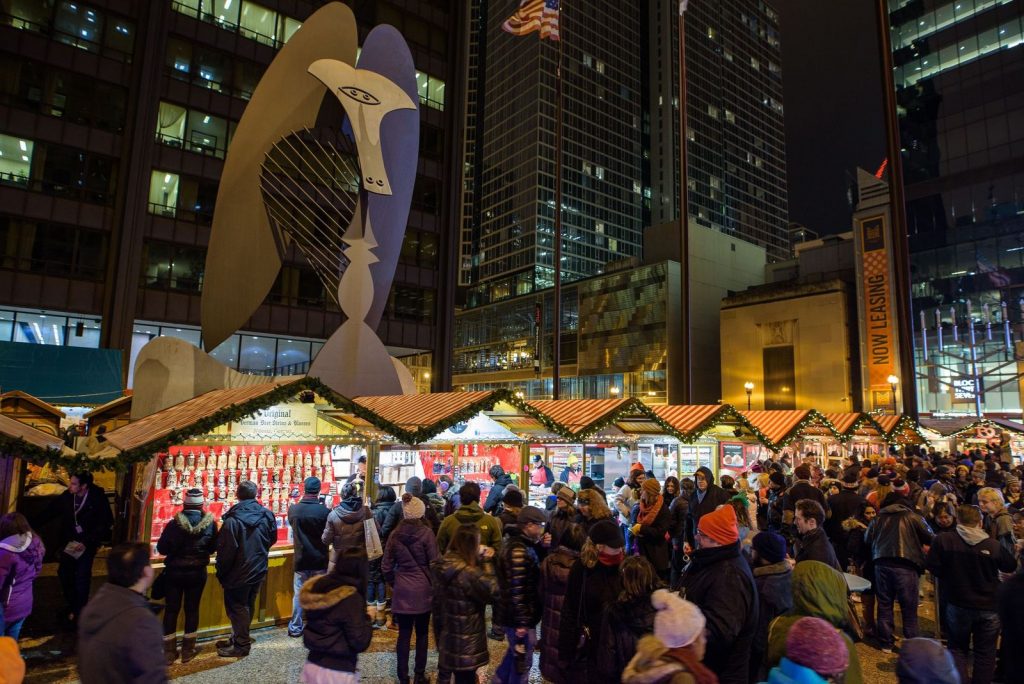 Another holiday favorite in Chicago is Christmas Around the World, the Museum of Science and Industry’s grand exhibition of Christmas trees decorated by groups according to their ethnic traditions. Two theatrical performances in Chicago’s Loop have become Christmas traditions: Charles Dickens’ A Christmas Carol at the Goodman Theatre and Joffrey Ballet’s The Nutcracker at the Auditorium Theatre.

Many travelers celebrate the season big-city style by drifting in and out of fashionable shops on Chicago’s Magnificent Mile, a glittering retail corridor on North Michigan Avenue that stretches from the Chicago River to Oak Street. Just to the east, Navy Pier is loaded with shops, kiosks and attractions; heated gondolas of the towering Centennial Wheel provide 360-degree views of the skyline and Lake Michigan. In northwest suburban Schaumburg, shoppers will find everything on their lists at Woodfield Mall. One of the nation’s largest enclosed shopping centers, it boasts nearly 300 stores and a new dining pavilion.

Whether your group is looking for urban pleasures or connecting with nature, Illinois abounds with winter travel opportunities.