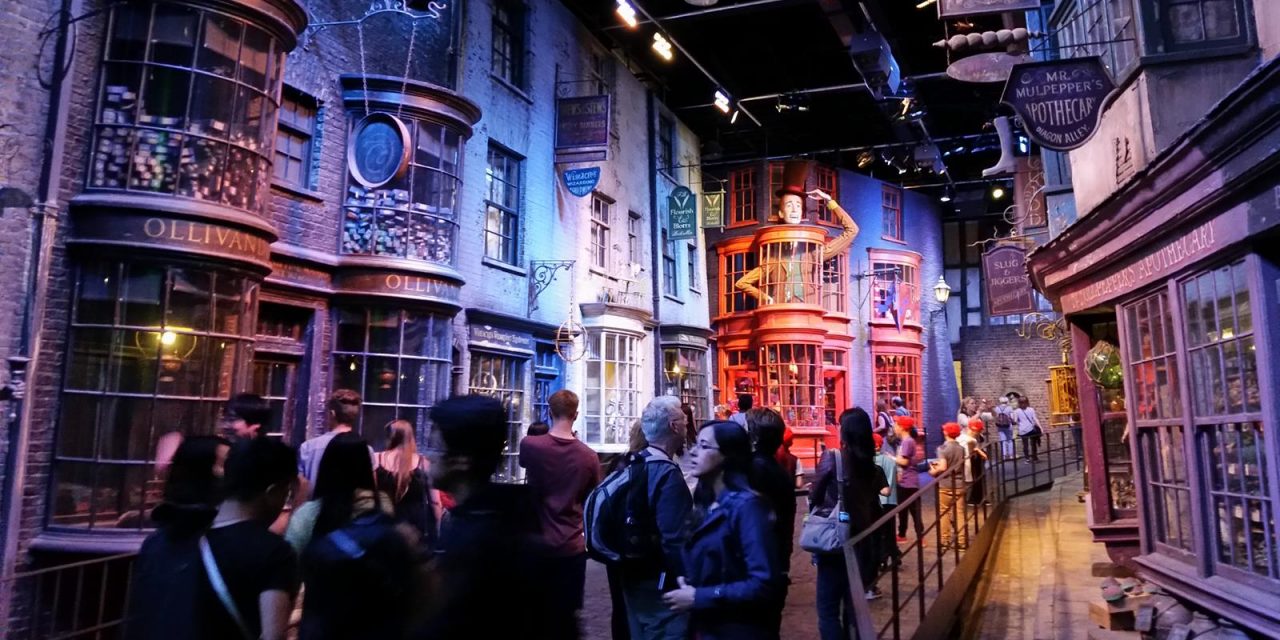 You’re in Britain’s capital, where famous sights and cultural adventures await. But how do you pull off a well-rounded visit to London in three days?

This was the exact situation I found myself in when stepping off my plane at London Heathrow Airport. The first time in any city is usually an exercise in compromise, so I endeavored to experience the core of iconic London the best I could, given my precious time. Hopefully the chronicling of my experiences will help guide you through this city if you find yourself in a similar situation.

As we all know, a critical element in any newcomer’s successful experience is having the right home base. I was lucky to have chosen the perfect place to call home during my stay in London, the Athenæum Hotel. 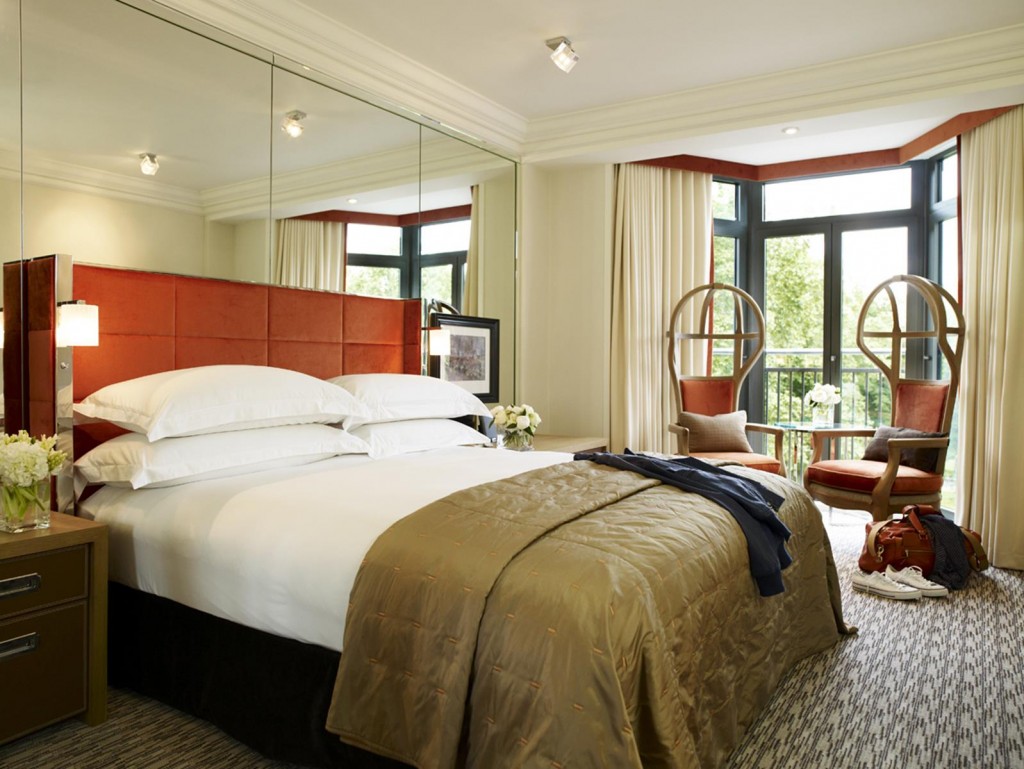 My home away from home at the Athenæum

Far more than a mere place to lay my head at night, the Athenæum was an experience in itself. From the moment I arrived, the staff went out of their way to make me feel as though they were welcoming me home; they spoke with warm smiles and volunteered guidance and assistance before I even knew I needed it. 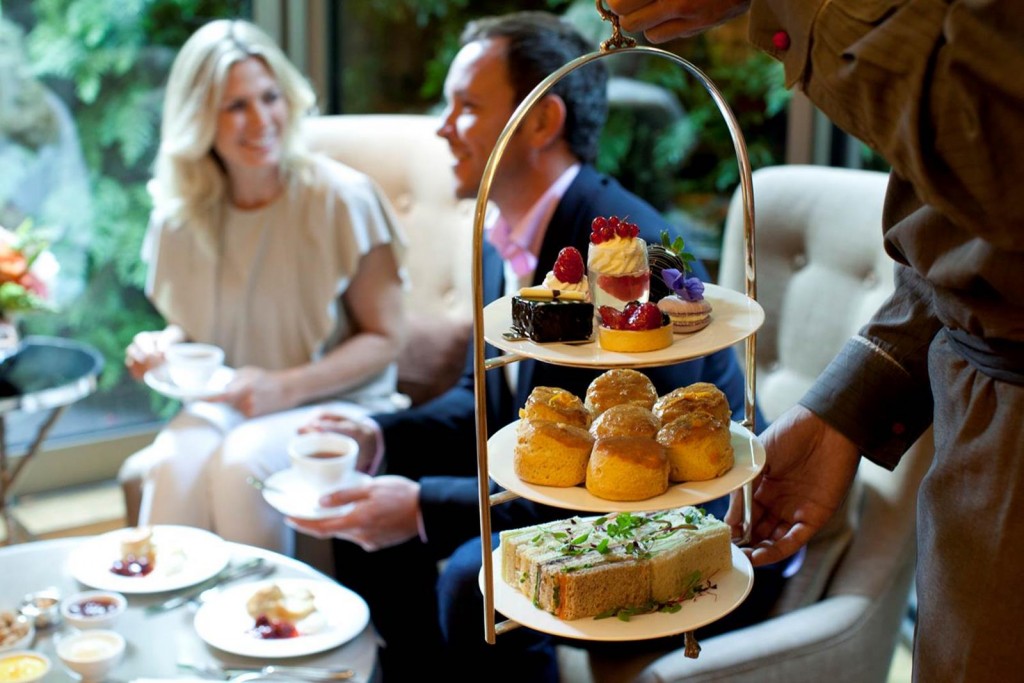 The hotel itself furthered that feeling, from the personalized welcome message in my room to the daily gathering for tea time. The Athenæum made me feel like, no matter what London adventures lay ahead of me that day, I knew I would have a place to return, re-energize and prepare for the following day.

Even before getting to the hotel, however, I picked up an essential aid for exploring London, the Oyster Card. If you’re not familiar with this rechargeable transportation card, you need to be, as it allows you hassle-free movement on buses, ferries and, of course, the well-known London Underground. You can pick one up right at the airport and immediately use it to ride the Underground into central London.

Although my hotel’s location was excellent, after checking in, I kept the Oyster Card in my pocket and decided to walk to the first stop on my list, Coca-Cola London Eye. Combine its claim to the tallest structure in the nearby vicinity with its central location along the bank of the Thames, and the view of the city from the Eye is one of the best available—perfect for snapping some brag-worthy selfies to send to your friends back home. 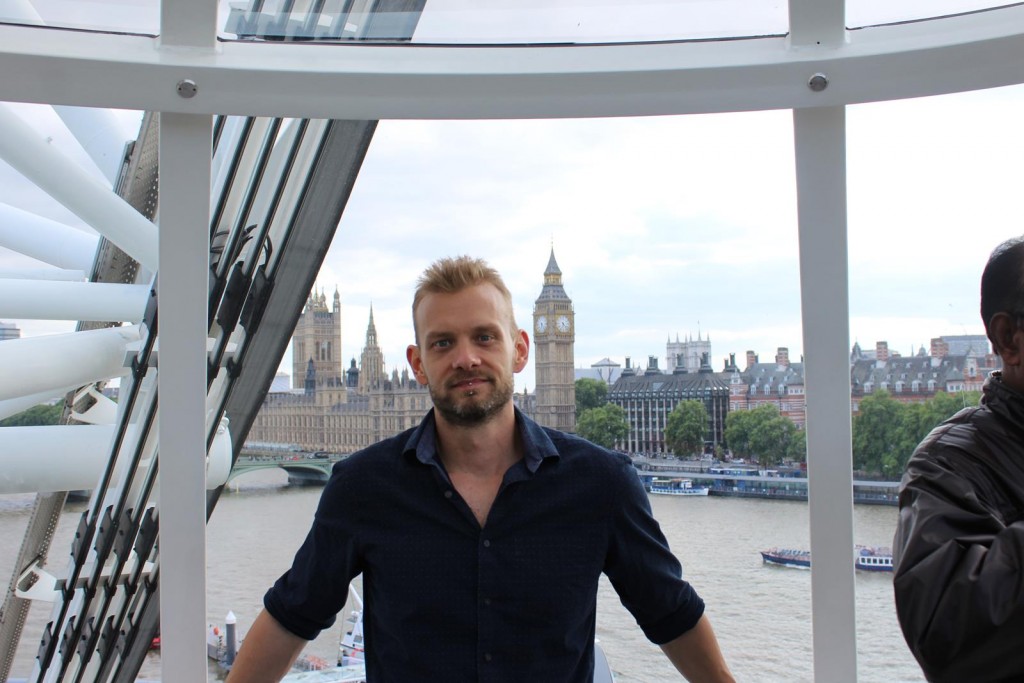 Making the people back home jealous

After capturing some great shots of Parliament, Big Ben and numerous other landmarks from the Eye (even the St. Thomas Hospital of Doctor Who fame), I could feel the effects of jetlag setting upon me and knew it was time to refuel. Wanting to explore the famous Soho neighborhood, that is where I went in search of food, aiming my path to take me by the Somerset House, Piccadilly Circus and Trafalgar Square along the way. 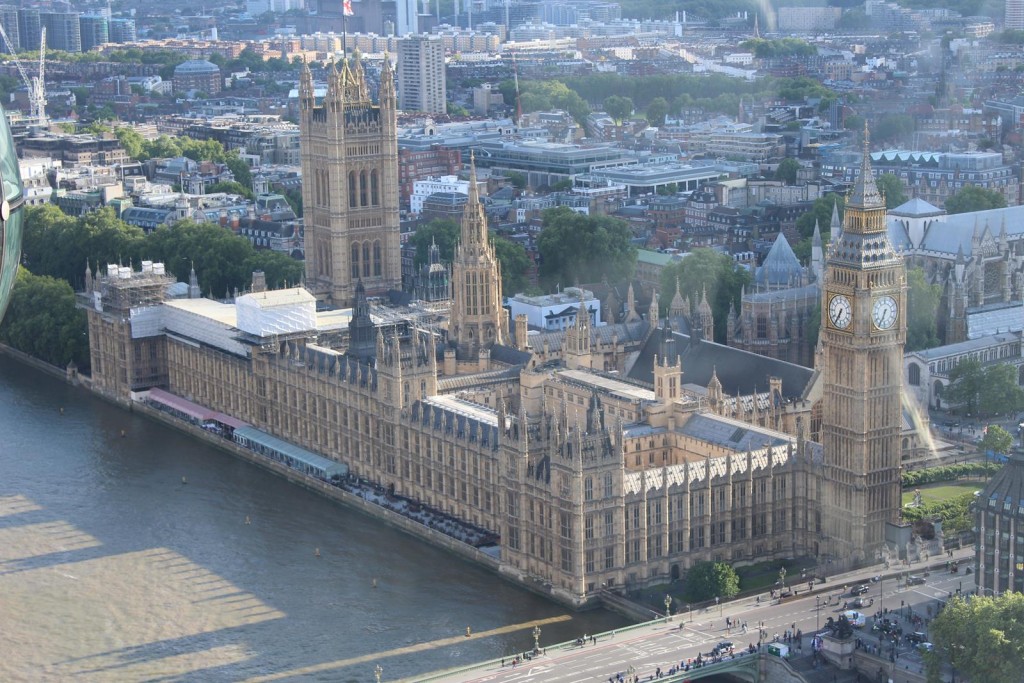 You won’t get shots like this from street level #londoneye

For the foodies, Soho can be a dream or a nightmare, depending on how you view the reality that there are far more excellent restaurants then you could possibly sample during any one visit to London. After some delightful meandering through the neighborhood, I decided to try a hip-looking Asian fusion place, Inamo, and I was not disappointed. 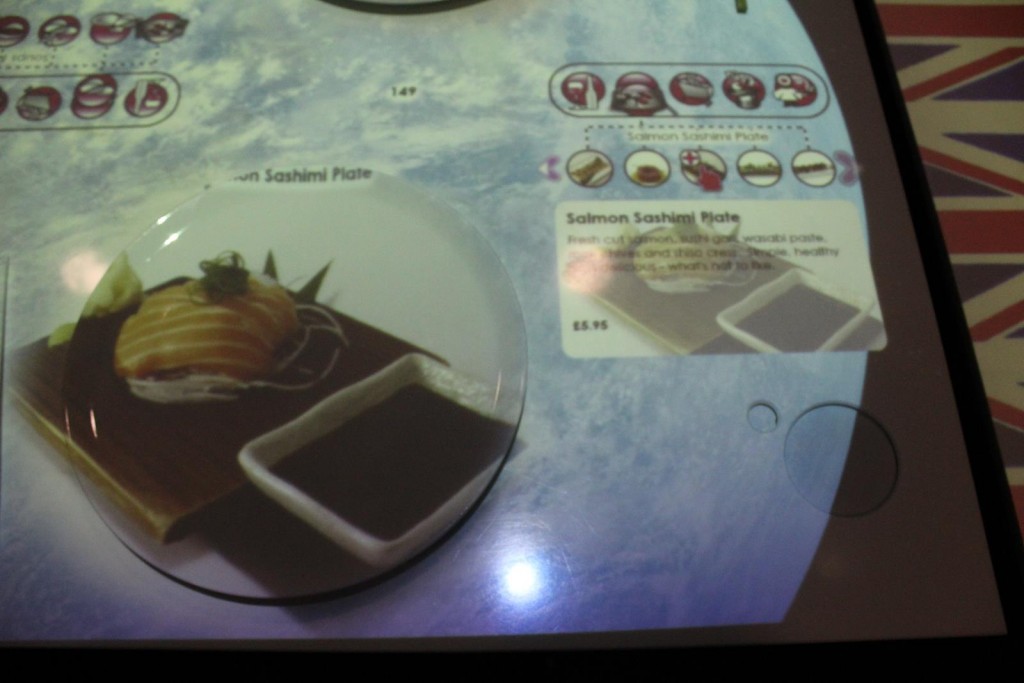 The food, service and atmosphere were amazing, but what really made the experience unique was their interactive ordering system, which projects down unto the table, allowing you to use your finger to tap your way through the menu, see previews of the food displayed right on your empty plate and send your order back to the kitchen whenever you’re ready.  There are even games and the ability to order a taxi, all from your interactive table. Very cool. 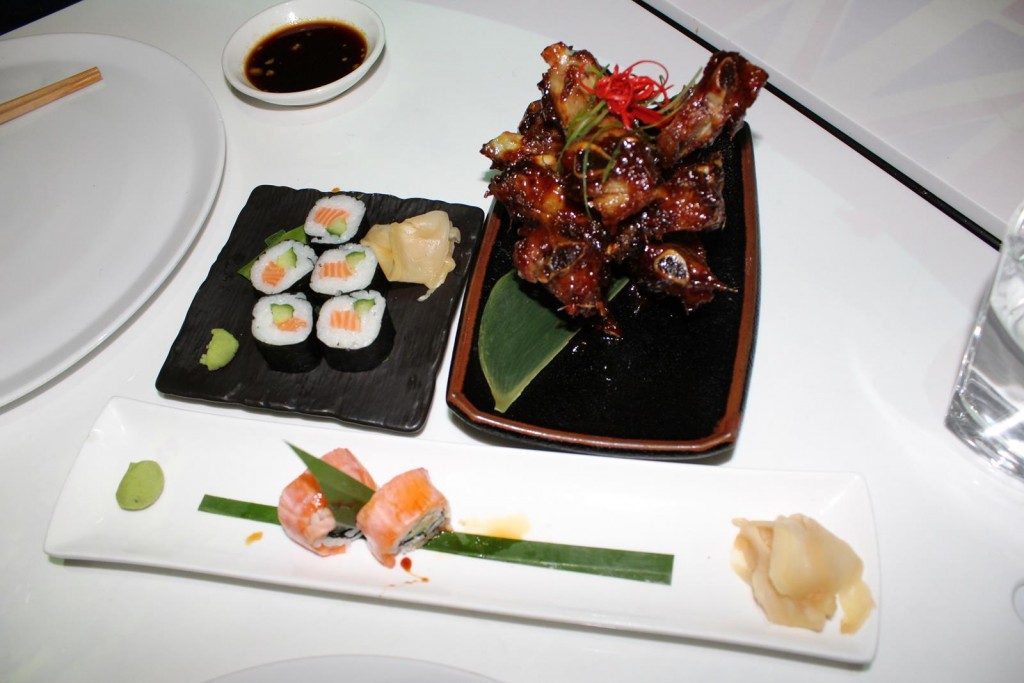 The preview was cool, but the real food was amazing

Rising bright and early the next morning on my first full day in London, I knew I had a lot of ground to cover. So after an excellent breakfast at the hotel, I hit the London streets with fervor. For my first stop, I visited the Churchill War Rooms, a must-see for any historical, political or World War II enthusiast. This vast network of underground rooms and hallways was the control center of the British WWII effort; much of it remains intact or was reconstructed to appear as it was during the war. It is a rare insight into this era that shouldn’t be missed. Smack in the middle of the tour through the war rooms sits an impressive museum dedicated to the life and times of Winston Churchill that I highly recommend. 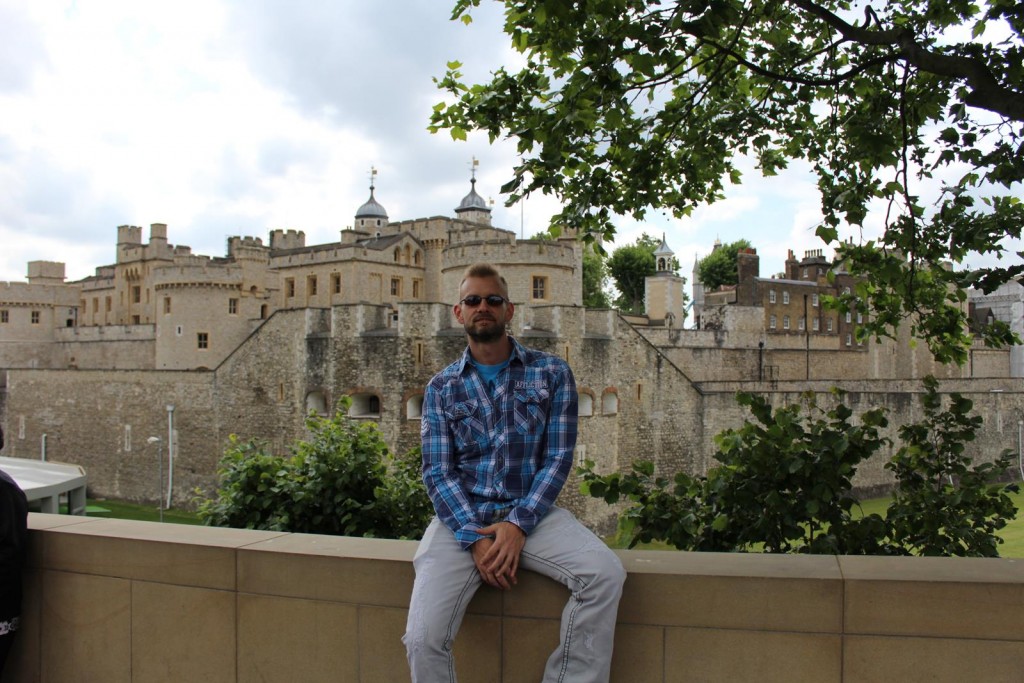 The Tower of London

From the war rooms, I rode the Underground over to a can’t-be-missed attraction, the Tower of London. I spent a mere two and a half hours there, but you could easily spend half a day wandering around the grounds, visiting the Medieval Palace, the Salt Tower, the Royal Armories in the White Tower and, of course, the Crown Jewels. The Wall Walk also offers some great vantage points for snapping pictures of the Tower Bridge, of which I took advantage. 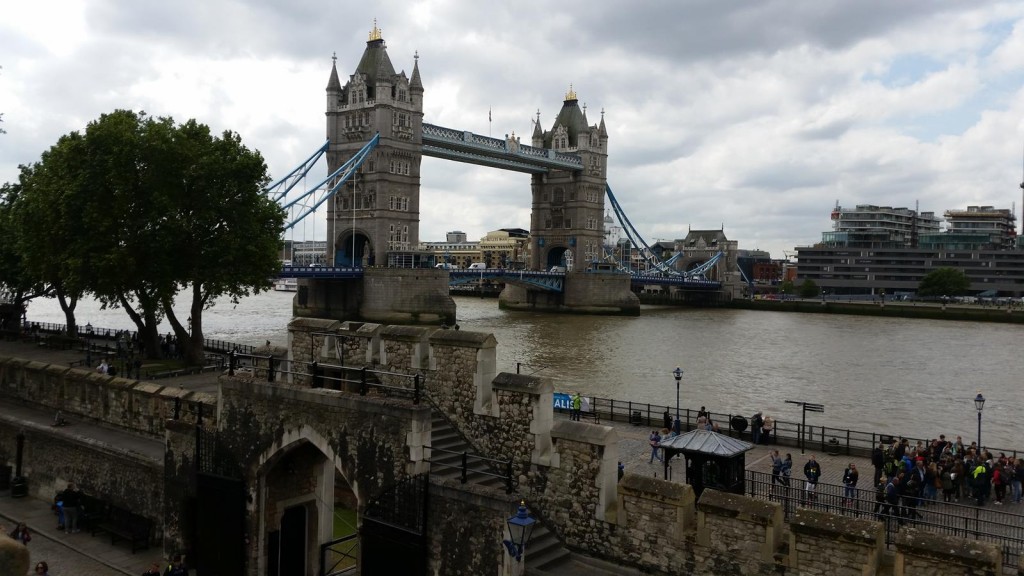 Tower Bridge from the wall of the Tower of London

Walking over Tower Bridge, I made my way to The Shard, which, on floors 68, 69 and 72, boasts the highest viewing platform in London with a 360-degree view that can reach out to 40 miles. Unlike other platforms of this nature that I’ve visited, The Shard had an open-air terrace on the top floor, which made the experience unique and enjoyable. They even host events such as yoga classes and silent discos. 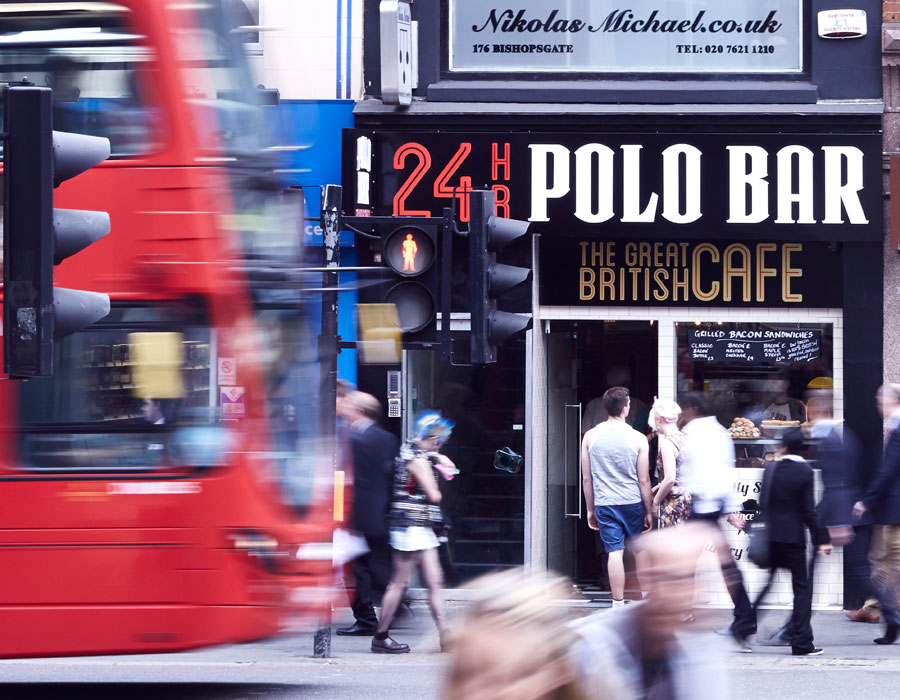 Easy to find and comforting on the stomach

The long morning left me famished, so after stopping to marvel at the Monument to the Great Fire of London, I continued north along the A10 and came across a wonderful restaurant that needs mentioning, Polo Bar. They claim that Polo Bar offers “a greasy spoon, gentrified” and that is exactly what they deliver. The delightfully decorated narrow, yet deep, multi-floored space was the perfect setting to enjoy one of the best burgers I’ve ever had, along with a glass of champagne, of course. It is a great place whether you’re looking for lunch or satisfying a 3 a.m. munchie attack, and their 24-hour alcohol license offers other possibilities as well. 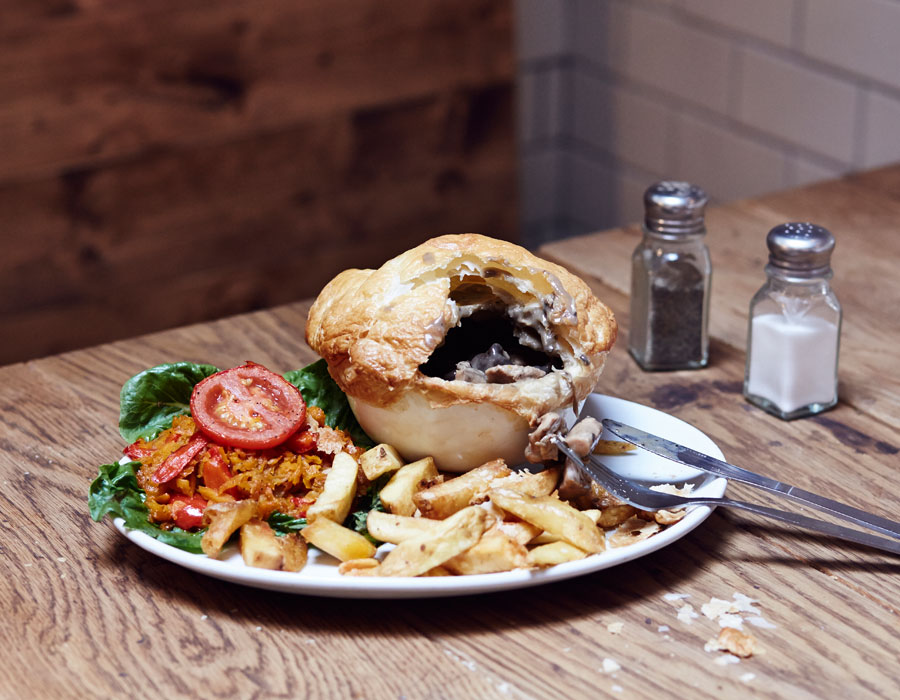 Lunch left my stomach full and my feet refreshed, so I ventured over to the Museum of London. However, with over one million items in its core collection, I focused my limited time on their Roman and Medieval London collections (favorite time periods of mine) before heading down for a tour of St. Paul’s Cathedral, crossing the Millennium Bridge and taking in a late afternoon performance at Shakespeare’s Globe Theater. 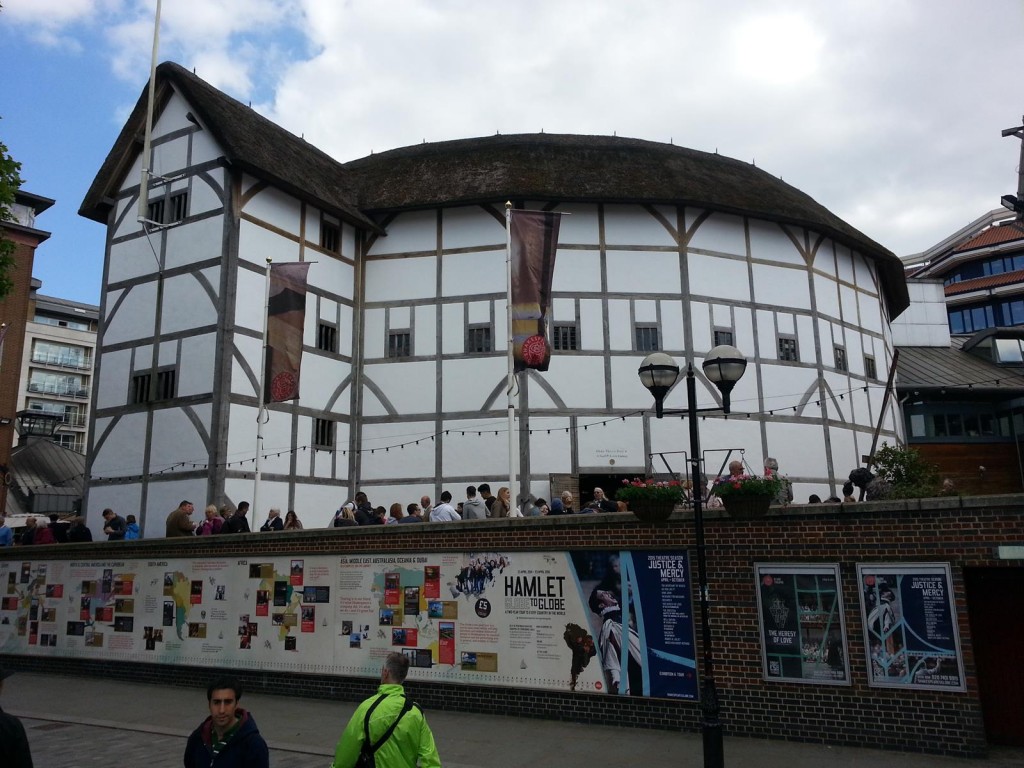 This left me with my final stop of the day, and a major one it was: the British Museum. As one of the largest museums in the world, with over eight million items, you could spend days wandering the halls of the vast complex. Therefore, come with a definitive plan and route in mind or you may lose yourself amongst all the splendid treasures that await inside. 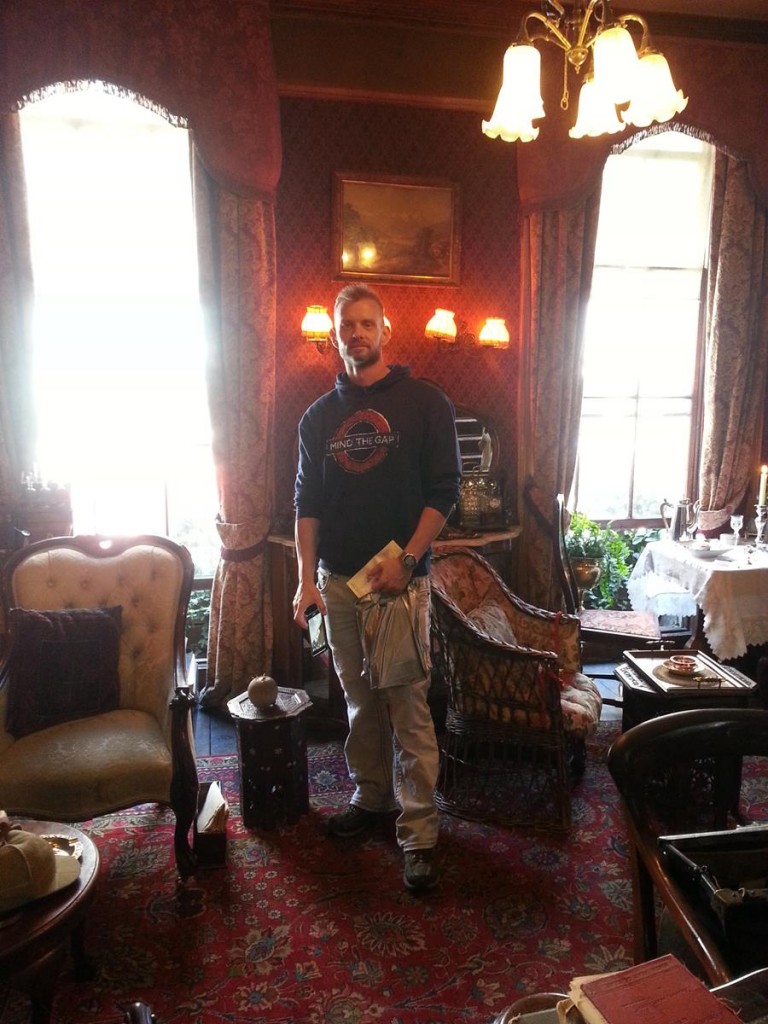 Why visit the Sherlock Holmes Museum? Elementary, my dear readers

I was never more delighted with my Oyster Card then on my third and final day in London, as I had a lot of ground to cover, starting with a stop at 221b Baker Street, the fabled residence to one of my favorite fictional characters and home to the Sherlock Holmes Museum, which bears his name.

Continuing my literary/entertainment theme of the day, the Charles Dickens Museum was next on my itinerary. Filled with books and other memorabilia, it’s an interesting portal into the life of one of Britain’s most celebrated authors—and one of my personal favorites.

My next stop wasn’t what would be considered part of the iconic, core London set of attractions, but as a dedicated Whovian (Doctor Who fan), I couldn’t pass up the chance to visit The Who Shop and Museum. Located several miles east from the city center, it also allowed me to experience a less polished and primed-for-tourists section of London, which is something I seek out in every place I travel. I wasn’t disappointed in either the museum or the neighborhood, and I recommend them both for Whovians and non-Whovians alike who want an experience a little off the beaten track.

From there it was time to turn my path northwesterly, so I hopped back on the Underground and rode it all the way up to its terminus at Watford Station for my visit to the Warner Bros Harry Potter Studio Tour in Leavesden. 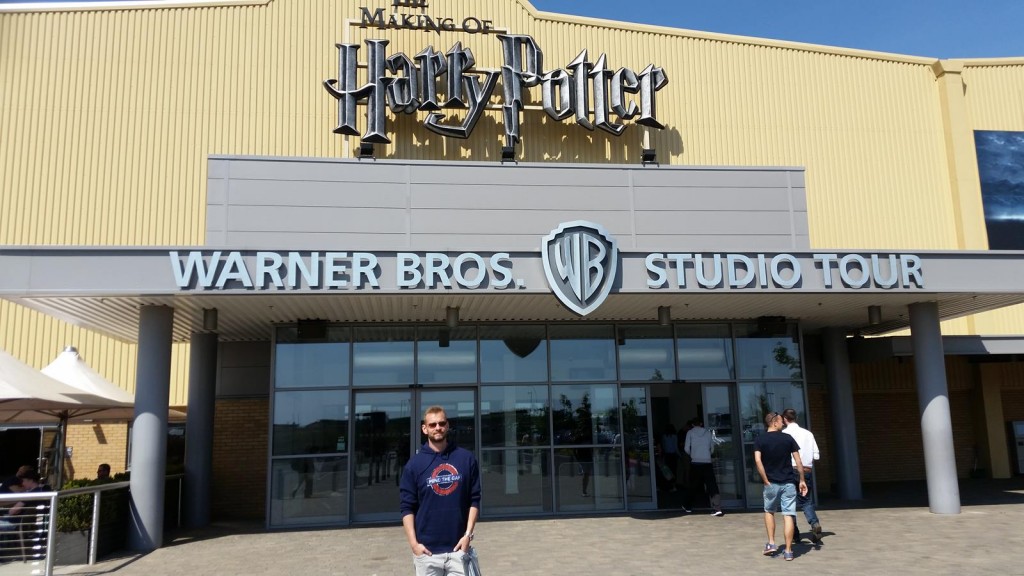 Of important note here is that I made what is an apparently common mistake in my choice of transportation by taking the Underground to Watford Station. I was informed upon arrival by a wonderfully polite and helpful shop owner that I should have taken the Overground commuter train to Watford Junction, from which the Studio Tour runs shuttles. Oops. However, this being a common occurrence, the taxi drivers stationed there knew exactly what had happened and in a flash, I was standing at the entrance to the studio. 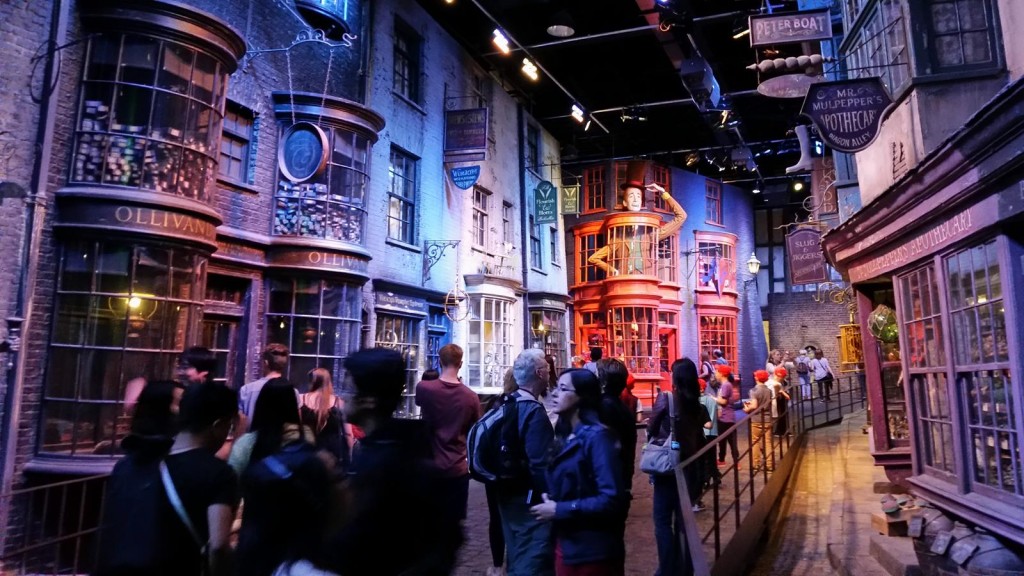 The Harry Potter Studio Tour was, dare I say, magical. The studio is packed, not just with numerous sets such as the Great Hall, Dumbledore’s Office, Privet Drive and Platform 9 ¾ (complete with the actual Hogwarts Express train), but also with countless props and costumes used in the actual movies. You can also get into the action by learning how to properly wave your wand to cast a spell or see green screen technology in action as you ride a flying broomstick. There’s also the myriad of production sketches and development props that were used in creating the Harry Potter universe, including a truly impressive, massive scale model of Hogwarts. The tour was a highlight of my trip and a great way to wrap up my time in this wonderful city. 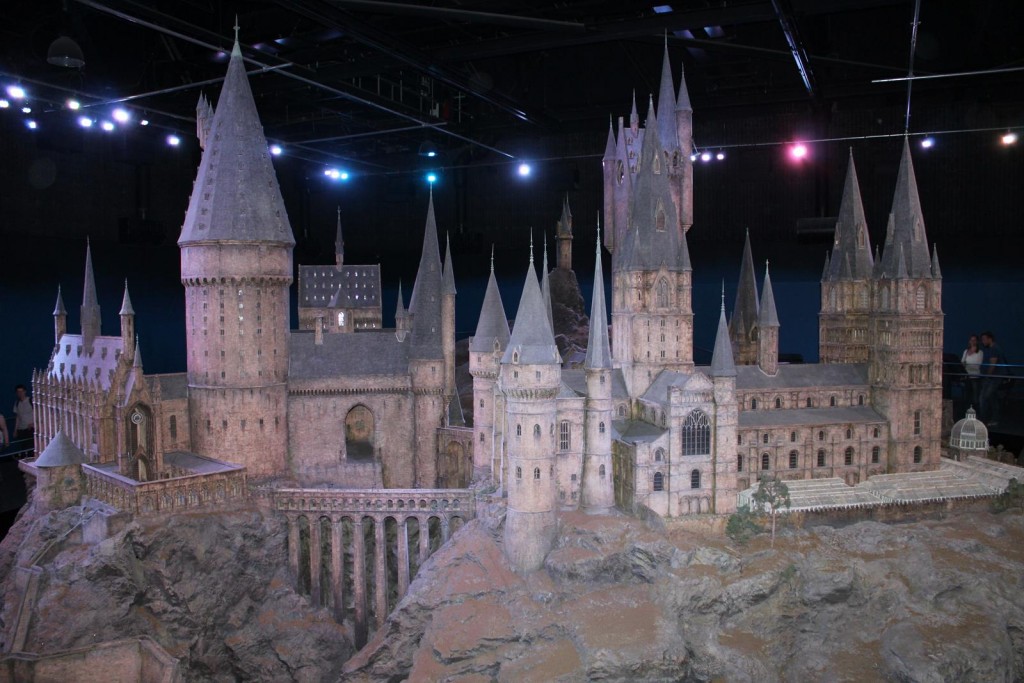 Amazing and gigantic model of the grounds of Hogwarts

Such were my two and half days in London, and while I experienced a great deal, so much remains to be explored, discovered and experienced, and I look forward to returning soon. I could fill pages on each of the places I’ve mentioned, so I invite you to explore them further by following the links above.